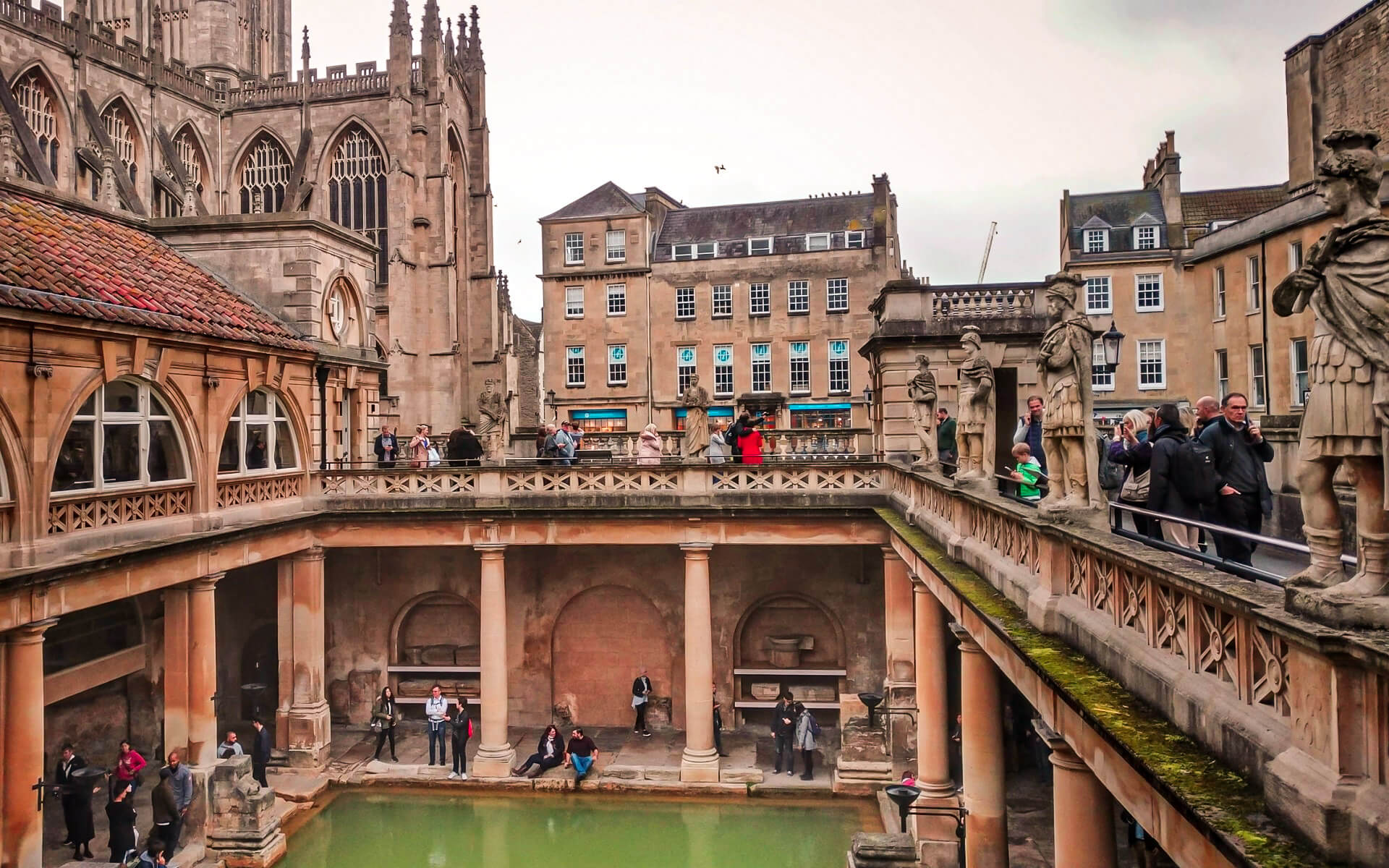 Bath is a city in Somerset, England, noted for its Roman baths. The population was 88,859 in 2011. Bath is located in the Avon Valley, 97 miles (156 kilometers) west of London and 11 miles (18 kilometers) south-east of Bristol. In 1987, the city was designated as a UNESCO World Heritage Site.

The Romans erected baths and a temple in the valley of the River Avon in AD 60, giving the city the Latin name Aquae Sulis (“the waters of Sulis”), but hot springs were known long before then. Bath Abbey was created in the seventh century and later became a monastic center; the structure was restored in the 12th and 16th centuries. Claims were made in the 17th century for the medicinal virtues of the spring water, and Bath became prominent as a spa town throughout the Georgian period. The Royal Crescent, Circus, Pump Room, and Assembly Rooms are examples of Georgian architecture made from Bath stone, where Beau Nash reigned over the city’s social life from 1705 until his death in 1761. Many of the streets and squares were planned up by John Wood, the Elder, and the city became fashionable and increased in population in the 18th century. Jane Austen resided in Bath in the early 1800s. More construction was done in the nineteenth century, as well as after the Bath Blitz in World War II.

The city’s industries include software, publishing, and service-oriented businesses. Theatres, museums, and other cultural and athletic events have contributed to the city’s status as a major tourist destination, with over one million overnight guests and 3.8 million day visitors per year. The Museum of Bath Architecture, Victoria Art Gallery, Museum of East Asian Art, and the Holburne Museum are among the museums in the city. Bath has two universities: the University of Bath and Bath Spa University, as well as Bath College, which offers further education. Bath Rugby and Bath City F.C. are two sporting clubs, while TeamBath is the umbrella name for all of the University of Bath’s sports teams.

Bath was included into the county of Avon in 1974, and since Avon’s demise in 1996, it has served as the primary center of Bath and North East Somerset.

Bath is a Roman and Georgian spa town. It is a World Heritage Site located 100 miles west of London and 15 miles (25 kilometers) south of the closest major city, Bristol. Bath is well-known for its hot springs, Roman baths, Medieval history, and grand Georgian buildings. Bath (population 80,000+) is located in the rolling Somerset countryside on the southern edge of the Cotswolds and offers a diverse range of attractions to its 4.8 million visitors each year, including restaurants, theatres, cinemas, pubs, and nightclubs, as well as interesting museums and a wide range of guided tours.

The city’s nomination as a World Historical Site in 1987, in acknowledgment of its worldwide cultural value, has boosted the city’s visitation primarily in the areas of heritage tourism and cultural tourism. From the Roman Baths (with their substantial Celtic presence), through Bath Abbey and the Royal Crescent, to the more contemporary Thermae Bath Spa, the city represents all key eras of England’s history. The strength of the tourism sector is mirrored in the over 300 places of lodging, which include more than 80 hotels, two of which have ‘five-star’ ratings, over 180 bed and breakfasts, many of which are housed in Georgian houses, and two campgrounds on the city’s western outskirts. There are also roughly 100 restaurants and a comparable number of pubs and bars in the city. Several firms provide open-top bus tours of the city, as well as walking and river trips. Since the inauguration of Thermae Bath Spa in 2006, the city has strived to reclaim its historical status as the only town or city in the United Kingdom that allows guests to soak in naturally heated spring waters.

In the 2010 Google Street View Best Streets Awards, the Royal Crescent came in second place for “Britain’s Most Picturesque Street,” with The Shambles in York taking first place. Milsom Street was also named “Britain’s Best Fashion Street” in a poll of 11,000 people.

Bath, like the rest of South West England, has a temperate climate that is wetter and milder in general than the rest of the nation. The yearly average temperature is about 10 °C (50.0 °F). Because of the nearby sea temperatures, seasonal temperature variance is less dramatic than in the rest of the United Kingdom. The hottest months are July and August, with typical daily maxima of about 21 °C (69.8 °F). In the winter, mean low temperatures of 1 or 2 degrees Celsius (33.8 or 35.6 degrees Fahrenheit) are frequent. The Azores high pressure impacts the south-west of England throughout the summer, providing fine weather; however, convective cloud may build inland, lowering the amount of hours of sunlight. The annual sunlight rate is somewhat lower than the area average of 1,600 hours. At Yeovilton, 20 days without sun were reported in December 1998. The majority of rain in the southwest is produced by Atlantic depressions or convection. The Atlantic depressions provide the most of the rainfall in autumn and winter, when they are most active. A substantial percentage of the rainfall in the summer is created by the sun heating the earth, causing convection and showers and thunderstorms. The average annual rainfall is roughly 700 mm (28 in). Snowfall often lasts 8–15 days. Mean wind speeds are greatest from November to March, and lowest from June to August. The wind blows mostly from the south-west.

Bath is located in the Avon Valley, close to the southern border of the Cotswolds, a group of limestone hills designated as an Area of Outstanding Natural Beauty. The Lansdown plateau, which surrounds and forms the city, has a maximum elevation of 781 feet (238 meters). Bath is 11 square miles in size (28 square kilometres).

The Avon floodplain, on which the city center is located, is roughly 59 feet (18 meters) above sea level. The river, which was formerly an impassable network of braided streams separated by bogs and ponds, has been channeled into a single channel by weirs. Flooding was common in the lower section of the city until substantial flood control works were completed in the 1970s, which limited the life of many structures. Kensington Meadows is a small nature reserve consisting of mixed forest and open grassland near to the river.

Water bubbles up from the earth as geothermal springs from rain in the Mendip Hills. Rain percolates through limestone aquifers to depths ranging from 9,000 to 14,000 feet (2,700 to 4,300 meters), where geothermal energy boosts the water’s temperature to between 64 and 96 degrees Celsius (147–205 degrees Fahrenheit). The heated water rises to the top under pressure via fractures and faults in the limestone. A geological crack causes hot water at a temperature of 46 °C (115 °F) to surge here at a rate of 1,170,000 litres (257,364 imp gal) each day (the Pennyquick fault). A new spa-water bore-hole was drilled in 1983, giving a clean and safe supply for drinking in the Pump Room. There is no uniform definition that distinguishes a hot spring from a geothermal spring, however according to various definitions, the Bath springs are the only hot springs in the United Kingdom. Three of the springs provide water to the thermal spas.

Although manufacturing is declining, the city is home to a thriving software, publishing, and service-oriented sectors, including Future Publishing and London & Country mortgage brokers. The city’s tourist appeal has also resulted in a substantial number of employment in tourism-related sectors. Education and health (30,000 employment), retail, tourism, and leisure (14,000 jobs), and business and professional services are all important economic sectors in Bath (10,000 jobs). The National Health Service, the city’s two universities, and the Bath and North East Somerset Council, as well as the Ministry of Defence, are major employers, but a number of MOD offices formerly located in Bath have lately relocated to Bristol. Growing employment areas include information and communication technology, as well as creative and cultural industries, where Bath is recognized as a national publishing center, with the magazine and digital publisher Future Publishing employing over 650 people. Buro Happold (400) and IPL Information Processing Limited are two others (250). The city has around 400 retail businesses, half of which are managed by independent specialised shopkeepers, as well as about 100 restaurants and cafés that rely heavily on tourists.

To learn more about what to do and see in Bath, as well as where to stay, call the Bath Visitor Information Centre at 0906 7112000 (50p/min) or visit www.visitbath.co.uk.

Non-members may use the Internet at Bath Library (located in the Podium Shopping Centre) for £3.60 per hour.

Across the street from the railway station, there are a few of modest Internet cafés. Many cafés and pubs provide free wifi internet connectivity for your laptop, such as Wetherspoons or the Bell Inn on Walcot Street, where you may plug in your laptop for free. Many pubs, like the Saracen’s Head and St. Christopher’s Inn, also have paid wireless internet. On George Street, there’s also the Adventure Cafe.