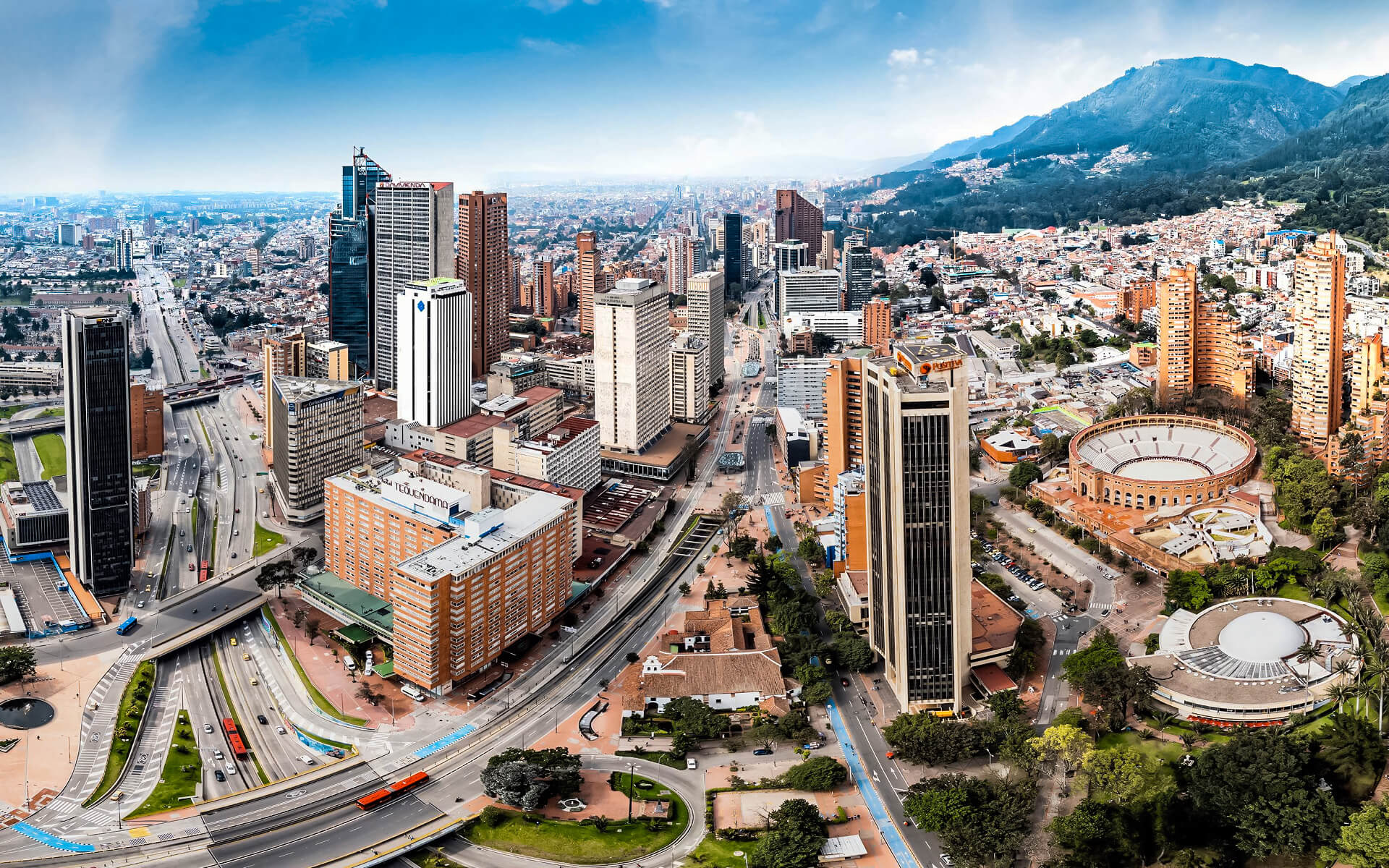 Bogotá, formally Bogotá, Distrito Capital, abbreviated Bogotá, D.C. (dubbed Santafé de Bogotá under Spanish administration and again from 1991 to 2000), is Colombia’s capital and biggest city. It is managed as the Capital District, but it is sometimes considered to be part of Cundinamarca. Bogotá is a first-class territorial unit, having the same administrative standing as Colombia’s departments. It serves as the country’s political, economic, administrative, industrial, artistic, cultural, and sporting hub.

The city is situated in the heart of Colombia, on a high plateau known as the Bogotá savanna, which is part of the Andes’ Eastern Cordillera’s Altiplano Cundiboyacense. At an average elevation of 2,640 metres (8,660 ft) above sea level, it is South America’s third-highest capital (after La Paz and Quito). Bogotá, which is split into 20 localities, has an area of 1,587 square kilometers (613 square miles) and enjoys a rather mild temperature throughout the year.

On August 6, 1538, Spanish adventurer Gonzalo Jiménez de Quesada established Bogotá as the capital of the New Kingdom of Granada after a difficult campaign into the Andes to conquer the Muisca. The original Muisca people named the hamlet where Bogotá was foundedBacatá. Bogotá became the capital of the sovereign country of Colombia, then known as Gran Colombia, after the Battle of Boyacá on August 7, 1819.

The city is home to top executive branch agencies (Office of the President), legislative branch agencies (Congress of Colombia), and judicial branch agencies (Supreme Court of Justice,Constitutional Court, Council of State and the Superior Council of Judicature). Bogotá is distinguished by its economic strength and financial maturity, its attraction to global corporations, and the quality of its human capital; it is Colombia’s main business platform, hosting the majority of high-impact projects. The capital serves as the primary market for Colombia and the Andean natural area, as well as the primary destination for new foreign direct investment projects entering Latin America and Colombia. It has the greatest nominal GDP in the country, accounting for the lion’s share of the national total (24.7 percent), and is Latin America’s seventh-largest metropolis in terms of GDP (about USD 159,850 million);

El Dorado International Airport, named after the fabled El Dorado, is the busiest airport in Latin America, transporting the most goods and passengers. It is Colombia’s city with the most universities and research institutes, as well as a significant cultural offering represented by several museums, the most prominent of which is the Museo del Oro, theaters, and libraries. Bogotá is ranked 52nd on the 2014 Global Cities Index and is classified by GaWC as a global city type “Beta.”

Bogotá’s enormous size and (outdated) reputation for violence intimidate tourists, yet the city rewards the astute traveler with tremendous riches befitting the capital of Colombia and one of Latin America’s largest cities. Historic riches—its well-preserved historic district makes a compelling case for being the first capital of Spanish colonial South America, as the capital of the large New Kingdom of Granada, conveniently located near the legendary El Dorado. Cultural treasures abound—the tiny historic area alone is home to dozens of experimental theaters, and different art galleries dot the city’s most popular neighborhoods, which are squeezed against the spectacular Eastern Andes hills. Culinary riches—the city’s various eating districts are home to world-class restaurants serving cuisines from throughout the globe, both traditional and contemporary, and are frequented by the local jet set. The nightlife is vibrant, with hot salsa clubs, English pubs, caffeine indie band events, cocktail lounges, steakhouses-turned-dance parties, and drawn-out chats in coffee shops and corner cafés in this distinctly cerebral university town dubbed the Athens of South America. You may tour the sites in a few days or stay for a month and experience the cosmopolitan lifestyle.

Bogotá, Colombia’s capital city, has a population of around 8.8 million people and is located approximately 8,660 feet (2640 m) above sea level in the Andes area. Orientation is quite straightforward, since the mountains to the east are visible from the majority of the city.

Bogotá is a city of contrasts, and as such, it gives its tourists an unforgettable experience. Prepare to strike a frenetic equilibrium between the new and the old; between the serene and the frenetic. Meet century-old plazas and cathedrals that are surrounded by soaring skyscrapers. Discover tranquil tree-lined cycling trails that are broken through by busy avenues. Bogotá is a multi-layered city. Bogotá is Colombia’s designated business capital, with globally renowned colleges and regional headquarters for major corporations. It is a city that caters to a population that has been exposed to European and North American influences, which means that traditional foods (Ajiaco) may be found alongside sushi and fast food places. It is one of Latin America’s most contemporary and cosmopolitan cities.

Bogotá is separated into four sections: the South, which is mostly impoverished; El Centro, which translates as “Center,” is the city’s original Downtown, and is home to the majority of the city’s historic cultural sites, municipal and governmental offices, and financial headquarters. El Occidente, which contains the majority of Bogotá’s major sporting venues and outdoor parks, as well as residential areas for the majority of the city’s middle and upper classes; and The North, which contains the majority of modern development, combining many upscale living spaces with affluent shopping centers, boutiques, cafes, and nightclubs, as well as numerous new business neighborhoods that are home to many multinational corporations.

Due to the city’s exponential expansion over the previous decades, some surrounding towns, such as Chia, Soacha, and Mosquera, have been absorbed and are now considered part of Greater Bogotá’s metropolitan area.

April, May, September, October, and November are the rainiest months, with normal days being largely cloudy with low clouds and occasional wind, with high temperatures of 18 °C (64 °F) and lows of 7 °C (45 °F).

Bogotá is situated in the southeastermost region of the Bogotá savanna (Sabana de Bogotá), at an average elevation of 2,640 metres (8,660 feet). Although the Bogotá savanna is often referred to as a “savannah” (sabana), it is really a high plateau in the Andes mountains, forming part of a larger area known as the Altiplano Cundiboyacense, which translates as “high plateau of Cundinamarca and Boyacá.”

The world’s biggest continuous paramoecosystem, Sumapaz paramo, is located in the district of Bogota’s extreme south.

The Bogotá River, which flows NE-SW, passes the sabana to the south, generating Tequendama Falls (Salto del Tequendama). Tributary rivers carve out valleys that are home to thriving settlements whose economies are centered on agriculture, animal husbandry, and artisanal production.

To the east, the sabana is bounded by the Andes’ Eastern Cordillera mountain range. The Eastern Hills, which constrain city expansion, span from south to north and give rise to the Guadalupe and Monserrate mountains east of the city. The Bogotá River serves as the city’s western boundary. To the south, the Sumapaz Paramo (moorland) borders, while to the north, Bogotá stretches over the plateau to the cities of Cha and Sopó.

In 2008, the United Kingdom’s World Cities Study Group and Network (GaWC) categorized Bogotá as a beta-level city, a medium classification. Beta-level cities are significant global cities that play a critical role in connecting their area or state to the global economy.

Bogotá accounts for 56% of all tourists to Colombia and is home to 1,423 international corporations. Additionally, Bogotá was scored well as a worldwide location for business and gatherings. Bogotá is becoming an increasingly popular international meeting location.

The hotels in La Candelaria’s historic center and neighboring regions appeal to culture and arts enthusiasts. Additionally, this region has the majority of the city’s hostels. Numerous museums are located in La Candelaria, including the Botero Museum and the Gold Museum. Cerro Monserrate is located near La Candelaria and may be reached either cable car or funicular. The hotels in Ciudad Salitre are designed for travelers who are only in Bogotá for a brief period and are situated close El Dorado International Airport.

Significant landmarks and tourist attractions in Bogotá include the José Celestino Mutis botanical garden, La Quinta de Bolivar, the national observatory, the planetarium, Maloka, the Colpatria observation point, the La Calera observation point, the American flags monument, and La Candelaria (the historical district of the city). Additionally, there is Usaquen, a colonial monument where breakfast and a flea market are a Sunday ritual. Numerous green parks and amusement parks, such as Salitre Magico or Mundo Aventura, are located around the city.

The lush regions around Bogota are ideal for eco-tourism and trekking activities. In the city’s eastern slopes, only a few minutes’ walk from major highways, are Quebrada La vieja and Chapinero Waterfalls, two of several green destinations for sightseeing and tourism with pure air.

Additionally, there are numerous regions across the city where one may find exquisite eateries. G Zone, T Zone, and La Macarena are all well-known for their culinary offerings.

Since the 2000s, the city has attracted big hotel brands.

The economy of Bogotá has been greatly bolstered in recent years as a result of the construction of new retail complexes. Approximately 160 additional malls were being built to complement the current 100.