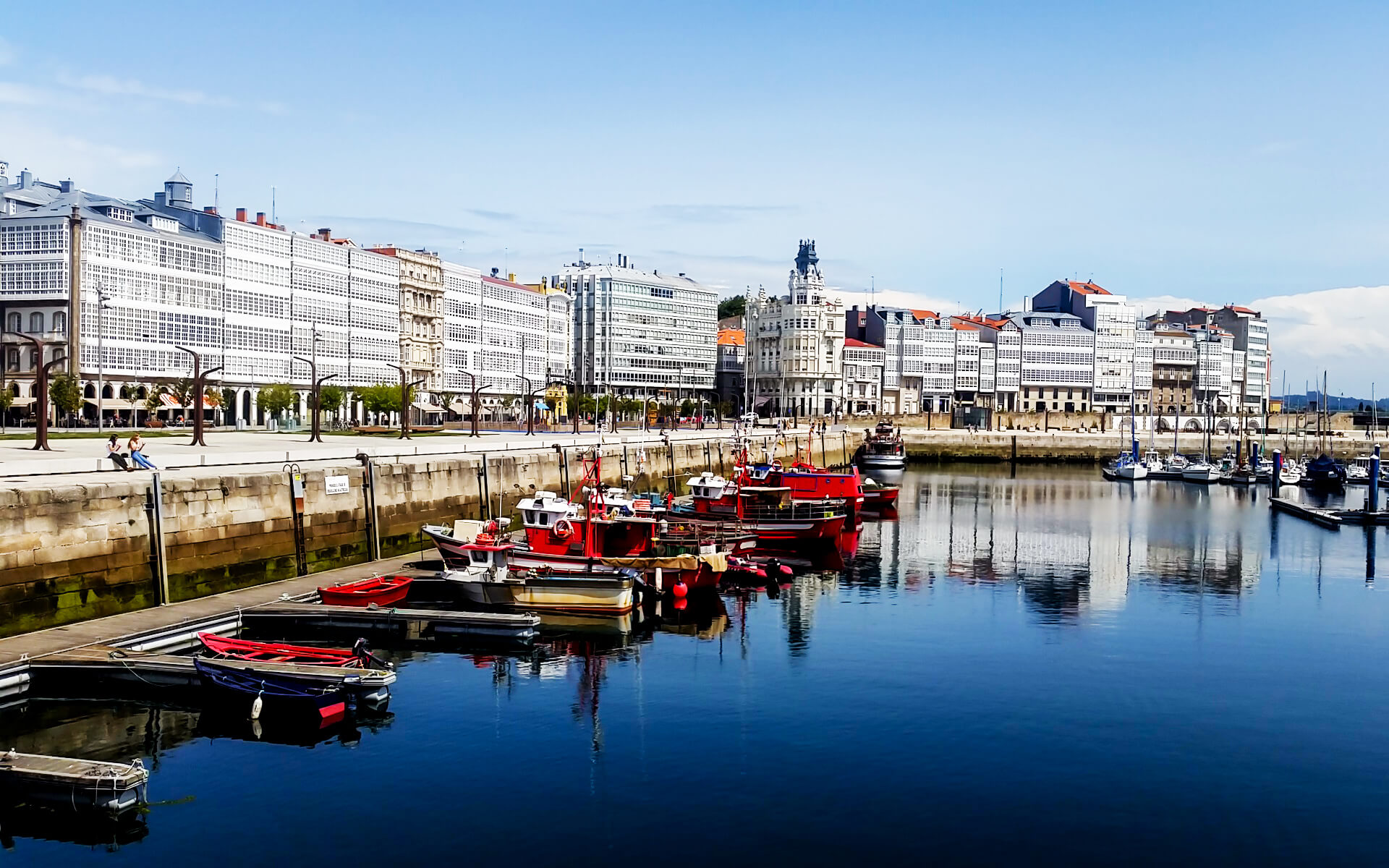 A Coruña (La Coruña) is a city and municipality in the Spanish province of Galicia. It is the second-biggest city in the autonomous community and the seventeenth largest city in the nation overall. The city is the provincial capital of the same name, having formerly served as the political capital of the Kingdom of Galicia from the 16th to the 19th century, as well as as a regional administrative center from 1833 and 1982, until being succeeded by Santiago de Compostela.

A Coruña is a busy port on the Atlantic Ocean, positioned on a headland at the mouth of an estuary in a huge gulf (the Portus Magnus Artabrorum of the antique geographers). It serves as a distribution center for agricultural items from the surrounding area.

In recent years, tourism in A Coruña has grown to the point that it now receives 62 cruise ships each year.

A Corua’s two major beaches (Orzán and Riazor) are situated in the city center and are bounded by the promenade above. This position makes them a popular tourist destination, as well as a popular gathering place for surfers throughout the year. Other beaches in the city include As Lapas, San Amaro, Oza, and Matadoiro. These four beaches, together with Riazor and Orzán, were awarded blue flag status in 2011.

An major festival is celebrated on the night of San Juan / Xan Xoán, with a large fireworks display, procession, bonfires, and the ancient flames on all city beaches until morning.

For the first time ever, the number of visitors in 2006 almost doubled the city’s population, with over 500,000 individuals choosing the city as a tourist destination.

The city has a substantial hotel network, with around 3,000 hotel vacancies. There is one five-star hotel, 11 four-star hotels, and several more hotels and hostels. The city is also focused on business tourism, with the Congress and Exhibition Centre PALEXCO, which has a capacity of over 2,500 people, as well as a new trade fair center, EXPOCORUÑA, which hosts concerts, exhibits, and festivals such as Sónar.

The RomanTower of Hercules, a lighthouse that has been in continuous service since perhaps the 2nd century AD, is located in the city. UNESCO has designated it as a World Heritage Site. A huge public park with a golf course and a former Muslim cemetery surrounds it. The lighthouse is the primary symbol on the city’s flag and coat of arms.

The city is particularly widely recognized for its distinctive glass window balconies, known as galeras. Originally, this style of building arose as a naval architectural solution for difficult weather, specifically constructed for rainy days. This trend began in the 18th century in Ferrol, when some technicians working for the Royal Dockyards had the notion to use the design of the rear of a war ship in a contemporary structure. Soon after, most northern Spanish seaports, including the Basque area, added similar glass window balconies to their city-port buildings.

The oldest area of A Coruña is known as the Old Town (Ciudad Vieja in Spanish, Cidade Vella in Galician). During the ninth and tenth centuries, the residents of what was then known as Faro Island (the peninsula where the Tower of Hercules sits) fled the region owing to repeated Viking invasions and moved in the Betanzos area. In 1208 King Alfonso IX refounded the city at its current location and placed it under his personal administration, free of loyalty to the church or feudal lords. The Old Town’s barely remaining city walls, as well as three harbours: the Parrote and San Miguel, were constructed in the fourteenth century. It also retains the Old Fortress, which has been turned into the Garden of San Carlos, where Sir John Moore is buried. The streets and squares of A Coruña’s Old City have been preserved, as have aristocratic homes and apartments like as Rosalia de Castro’s house on Prince Street. Notable structures include the Royal Galician Academy, an institution dedicated to the study of Galician culture and, in particular, the Galician language, the Romanic churches of Santiago and Saint Mary, As Bárbaras Monastery (Romanic and Baroque), and the headquarters of the Spanish Army’s Operational Logistics Force. A Medieval Fair is held in the streets of the Old City every July.

There are various museums in the city, including the Castle of San Antón Archaeological Museum, the Fine Arts Museum, the Unión Fenosa Museum of Contemporary Art (MACUF), and a network of scientific institutions (Casa das Ciencias, which also includes a planetarium, DOMUS, made by Arata Isozaki and Aquarium Finisterrae). The National Museum of Science and Technology (MUNCYT) established a branch in the city in 2012. Summer evenings are the busiest for A Coruña’s social scene. The majority of the pubs and clubs are located on Calle Orzan, which runs parallel to Paseo Maritimo on the beach side. Los Jardines (The Gardens), a park at the entrance of Calle Real and the Los Cantones Village Shopping Centre, is another popular destination for a younger demographic.

A Coruña has a temperate marine climate that is highly influenced by the Atlantic Ocean. Autumn and winter are often unstable and unpredictable, with strong gusts and plentiful rainfall from Atlantic depressions, and it is frequently cloudy. Temperatures are kept moderate by the ocean, and frost and snow are uncommon. Summers are mostly dry and sunny, with only sporadic rain; temperatures are warm but seldom unbearably hot due to the sea’s cooling impact throughout the day, with temperatures averaging approximately 22 °C (72 °F) between July and September. Spring is frequently chilly and peaceful. Even the hottest month on record, August 2003, with an average high temperature of 25 °C (77 °F), was comparatively mild. Temperatures over 25 °C (77 °F) are common in the summer, while temperatures exceeding 30 °C (86 °F) are uncommon.

A Coruña is situated on a peninsula, and its isthmus was formerly merely a short stretch of sand. Erosion and sea currents gradually accumulated sand, increasing it to its current size.

A Coruña and Christchurch, New Zealand, are one of just eight pairs of cities on the planet that are almost antipodal.

A Coruña is presently Galicia’s wealthiest area and its economic powerhouse. The city’s organization has changed over the years, and it currently shares certain administrative tasks with the neighbouring city of Ferrol. Companies have expanded, particularly in finance, communication, planning, sales, manufacturing, and technical services, transforming A Coruña into Galicia’s richest metropolitan region. The port itself unloads enormous quantities of fresh fish, along with a growth in other port operations like as crude oil and solid bulk, which account for 75 percent of Galician port traffic.

Zara, established by Amancio Ortega Gaona in 1975, opened its first shop in the city and has since grown to become a national and worldwide apparel giant.

Inditex, the world’s largest textile producer, has its headquarters in the adjacent town of Arteixo. A Coruña accounts for 30% of Galicia’s GDP, and it gained 35% between 1999 and 2001, outpacing Vigo, which has historically been economically stronger. Banco Pastor (owned by Banco Popular Espaol), Banco Etcheverra (the oldest in Spain), Hijos de Rivera Brewery, Abanca, R Cable Operator, the Repsol refinery, Gas Naturalcombined cycle power plant, General Dynamics factory, Alcoa aluminum plant, and La Voz de Galicia, the main daily newspaper of Galicia, are also important companies in the city. A Coruña is also a significant shopping hub. El Corte Inglés, Spain’s largest department store chain, has two locations in the city, one of which is in the new commercial area Marineda City, which opened in April 2011. It is the largest shopping center in Spain and includes, among other things, IKEA and Decathlon stores, cinemas, an ice rink, a bowling court, and a kart circuit. Carrefour (two locations), Hipercor, and Auchan are other hypermarket chains in the city (known in Spain as Alcampo).

Over the past several years, there has been a focus on improving access and infrastructure, particularly in the cultural, athletic, recreational, and scientific sectors. Following a major oil spill in which the Aegean Sea was destroyed and erupted, significant resources were spent on restoring the coastline and expanding the tourism industry. All of this has confirmed the city’s current identity as a center for administration, commerce, port operations, culture, and tourism. In 2015, 1.025.688 passengers utilized the city’s regional airport.