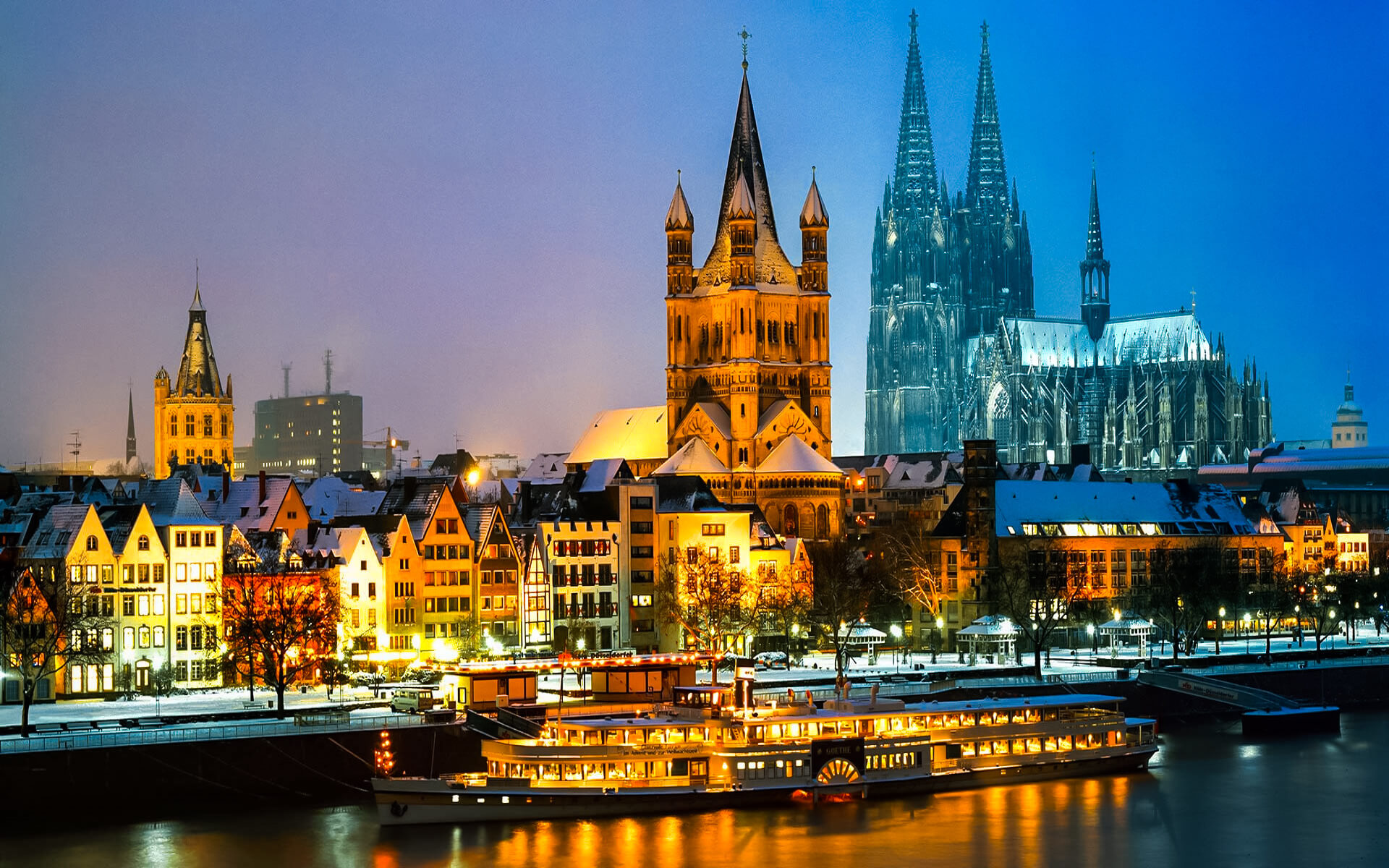 Cologne is the fourth biggest city in Germany, located on the Rhine River in North Rhine-Westphalia. It has a population of around one million people. It is one of the nation’s media, tourist, and business hubs, as well as one of Germany’s most liberal cities.

Cologne has a rich history dating back to the ancient Roman Empire, when it was built, and has been a continuously populated major regional center since then. In comparison to other German and European cities, ancient and medieval Cologne was relatively large, covering most of the modern-day city center, and as a result, a wealth of architectural heritage can be found throughout the city, ranging from pre-Christian times to strikingly modern buildings, with a high concentration of Romanesque and Gothic architecture culminating in the magnificent Cathedral (Dom).

Cologne, on the other hand, is not simply a tourist attraction, but also a major economic center, a worldwide significant trade fair venue, a cultural and media hotspot, and a key transit hub. This equal mix of duties and responsibilities permeates the city, bringing in a steady influx of tourists as well as a fairly diversified demographic mix. All of this culminates in the annual Karneval, which makes Cologne one of Germany’s most popular tourist attractions.

In 2008, Cologne had 4.31 million overnight stays and 2.38 million arrivals. In addition, the city boasts the most bars per capita in Germany. There are 70 clubs in the city, as well as “countless” bars, restaurants, and taverns.

For a city of its size, Cologne offers one of the greatest collections of museums and galleries in the world. Cologne has two museums of ecclesiastical art, both situated in architecturally spectacular structures, in addition to world-class museums of art and archaeology. There’s also an ethnographic museum, a chocolate museum, a German Sport Museum, and a plethora of Roman ruins.

A MuseumsCard may be purchased from any of the municipal museums (such as the first five listed below). The single card costs €15, while the family card costs €28 and permits two people and two children (under 18) to free entrance to all municipal museums on two consecutive days. It may also be used as a ticket on all buses and trams in the Köln transit system VRS on its first day of validity.

The Schildergasse, which extends from the Neumarkt, is Cologne’s primary retail route. Numerous department shops, boutiques, and other high-profile (and, frequently, high-priced) retail outlets may be found on the Schildergasse and Neumarkt, as well as pedestrianized side streets extending from them (particularly the Hohe Strasse running towards the Dom).

KölnTourismus, Unter Fettenhennen 19 (directly opposite the front entrance of the cathedral, take the U-Bahn to “Dom/Hbf”),  +49 221 2213-0400.M-F 09:00-22:00, Sa-Su 10:00-18:00. The Cologne Tourist Office has a plethora of information for visitors looking to fill their calendar with activities in and around the city. Inquire about available guide books, the majority of which give information for free.

The climate in North Western Germany is varied, with seasonal variations and day-to-day weather that may be compared to that of England or Northern France. Visitors visiting Cologne could anticipate the warmest month of the year to be July (temperatures were over 30 degrees Celsius for many days in July 2010), the coldest month to be January (temperatures hanging around the freezing mark), and the month with the greatest rainfall to be June.

The metropolitan area spans approximately 405 square kilometers (156 square miles), centered on a position at 50° 56′ 33 latitude and 6° 57′ 32 longitude. The city’s highest point (the Monte Troodelöh) is 118 meters (387.1 feet) above sea level, while its lowest point is 37.5 meters (123.0 feet) above sea level (the Worringer Bruch). Cologne is part of the wider Cologne Lowland, a cone-shaped territory of southeastern Westphalia located between Bonn, Aachen, and Düsseldorf.

Cologne benefits from a vast market structure as the biggest city in the Rhine-Ruhr metropolitan area. In rivalry with Düsseldorf, Cologne’s economy is principally built on the insurance and media sectors, but the city is also an important cultural and scientific center, as well as the location of a number of business headquarters.

The main corporate offices of the German flag airline Lufthansa and its subsidiary Lufthansa CityLine are in Cologne. Ford Europe, which has its European headquarters and a manufacturing in Niehl, is the city’s main employment (Ford-Werke GmbH). Toyota Motorsport GmbH (TMG), Toyota’s official racing team, is based in Cologne and is responsible for Toyota rally vehicles and eventually Formula One cars. The REWE Group, TÜV Rheinland, Deutz AG, and a number of Kölsch brewers are also headquartered in Cologne. Cologne has the greatest density of pubs per capita in the nation. Reissdorf, Gaffel, and Früh are the three biggest Kölsch breweries.

Cologne has historically been a significant commercial city, having links by land, air, and water. The city boasts five Rhine ports, making it Germany’s second biggest inland port and one of the largest in Europe. Cologne-Bonn Airport is Germany’s second biggest freight facility. With over 50 trade fairs and other big cultural and sporting events, the Cologne trade fair (Koelnmesse) is now a prominent European trade fair venue. Cologne had 4.31 million overnight stays and 2.38 million arrivals in 2008. The Kölner Stadt-Anzeiger is Cologne’s biggest daily newspaper.