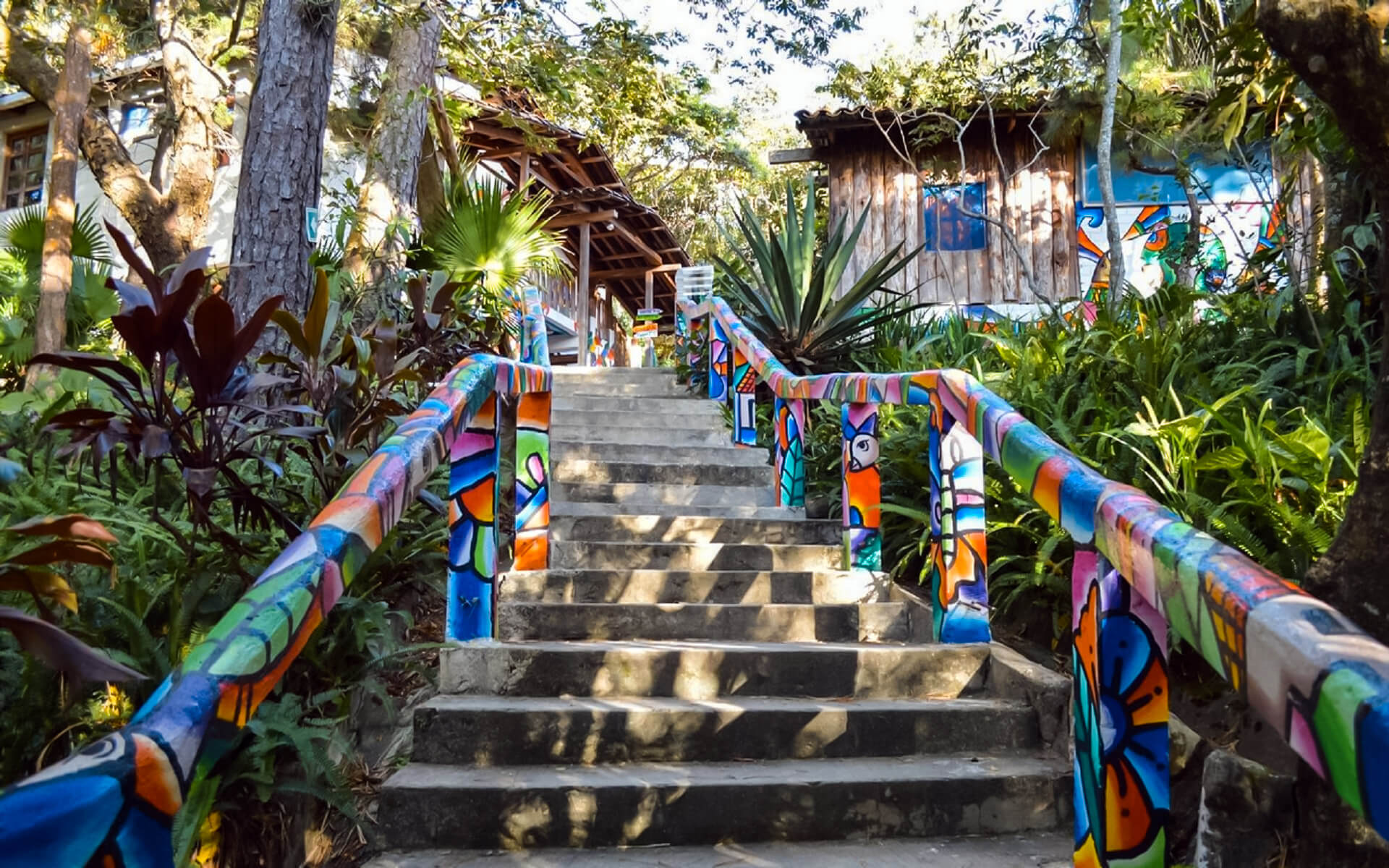 La Palma is notable for its wood crafts and Naf art designs, which were created by Salvadoran painter Fernando Llort, who also painted the mosaics of San Salvador’s Metropolitan Cathedral. Llort is one of the most influential persons in this municipality, and through his hard work, he taught the villagers the “naf” art, a method that entails depicting common rural life, as well as characteristic flora and wildlife of the area, using copinol seeds. Workshops for wood, leather, pottery, many types of seeds, and patterns on cotton clothing may be found in almost all of La Palma’s homes. This craft activity is now the source of more cash and employment in this community.

Apart from its handicrafts, La Palma gained international notice in 1984 when President José Napoleón Duarte met with rebel guerilla commanders in an effort to settle the civil war, the first such meeting since the conflict began in 1980.

La Palma was part of the Caminos Reales (Royal Roads), which were used to go to Honduras. It has been the site of national wars since the early years of independence, when municipal and government forces battled against ex-president Francisco Malespn’s army, and Malespn was defeated in both fights.

The name comes from a locality formerly known as the Palmita, a little settlement near the Nonuapa River, and dates back to the colonial era. Following a river flood in 1882, their people relocated to the current location and created La Palma. It was established as a town and municipality in 1959 by Legislative Decree, including the cantons of Los Horcones, Los Planes, Las Granadillas, El Gramal, San José Sacaré, El Tnel, El Aguacatal, and San Josecalera.

The region is significant in El Salvador’s history since it played a key part in the resolution of the civil war. The municipality functioned as a platform for the guerrillas’ ideological activity beginning in 1980, and subsequently as a battlefield for conflict between the rebels and the army. On October 15, 1984, President Jose Napoleón Duarte and the leaders of the Frente Farabundo Martir para la Liberación Nacional (FMLN) met for the first time, kicking off the process that would lead to the Chapultepec Peace Accords.

The municipality has a total size of around 131,89 km2. It shares jurisdictional boundaries with San Ignacio to the north, Agua Caliente to the south, Honduras and the municipalities of San Fernando, San Francisco Morazán, and La Reina to the east, and Metapan and Citalá to the west, all of which are separated by the Lempa River.

La Palma is located in El Salvador’s highland region and has a temperate climate. In the rural region, the municipality is split into 8 cantons and 87 minor settlements (caserios), while the urban area is divided into 6 districts. On July 1, 1956, the population of La Palma was projected to be 5,337, with 2,780 males and 2,957 females. However, in 2006, the municipality of La Palma was estimated to have a total population of 24,000 people in both urban and rural regions.

La Palma’s economy is mostly built on the arts and crafts. This commerce and tourist money provide a living for 75% of the people. Agriculture accounts for the remaining 25%, with vegetables, maize, beans, and coffee being the main crops.

Coffee production is the second most significant sector in La Palma, according to a municipal economic study from 2006, albeit it has been declining owing to heavy competition from overseas growers. Coffee production accounted for more than half of El Salvador’s export income in 1988, but it has since dropped to only 7% in 2004.

Lucerne is a city in central Switzerland, in the country’s German-speaking region. Lucerne is the capital of the canton of Lucerne and part of...
Read more

Santiago de Cali, often known as “Cali,” is the capital of the Valle del Cauca department and the most populous city in southwest Colombia,...
Read more

Sweden, formally the Kingdom of Sweden, is a northern European Scandinavian nation. It is bounded on the west by Norway and on the east...
Read more

Geneva is the second most populated city in Switzerland (after Zürich) and the most populous city in Romandy, Switzerland’s French-speaking region. It is the...
Read more

Guinea-Bissau, formally the Republic of Guinea-Bissau, is a West African country. It has a total area of 36,125 square kilometers (13,948 square miles) and...
Read more

Dallas is a prominent city in the state of Texas and the biggest urban center of the United States’ fourth largest metropolitan region. The...
Read more
Tourist destinations