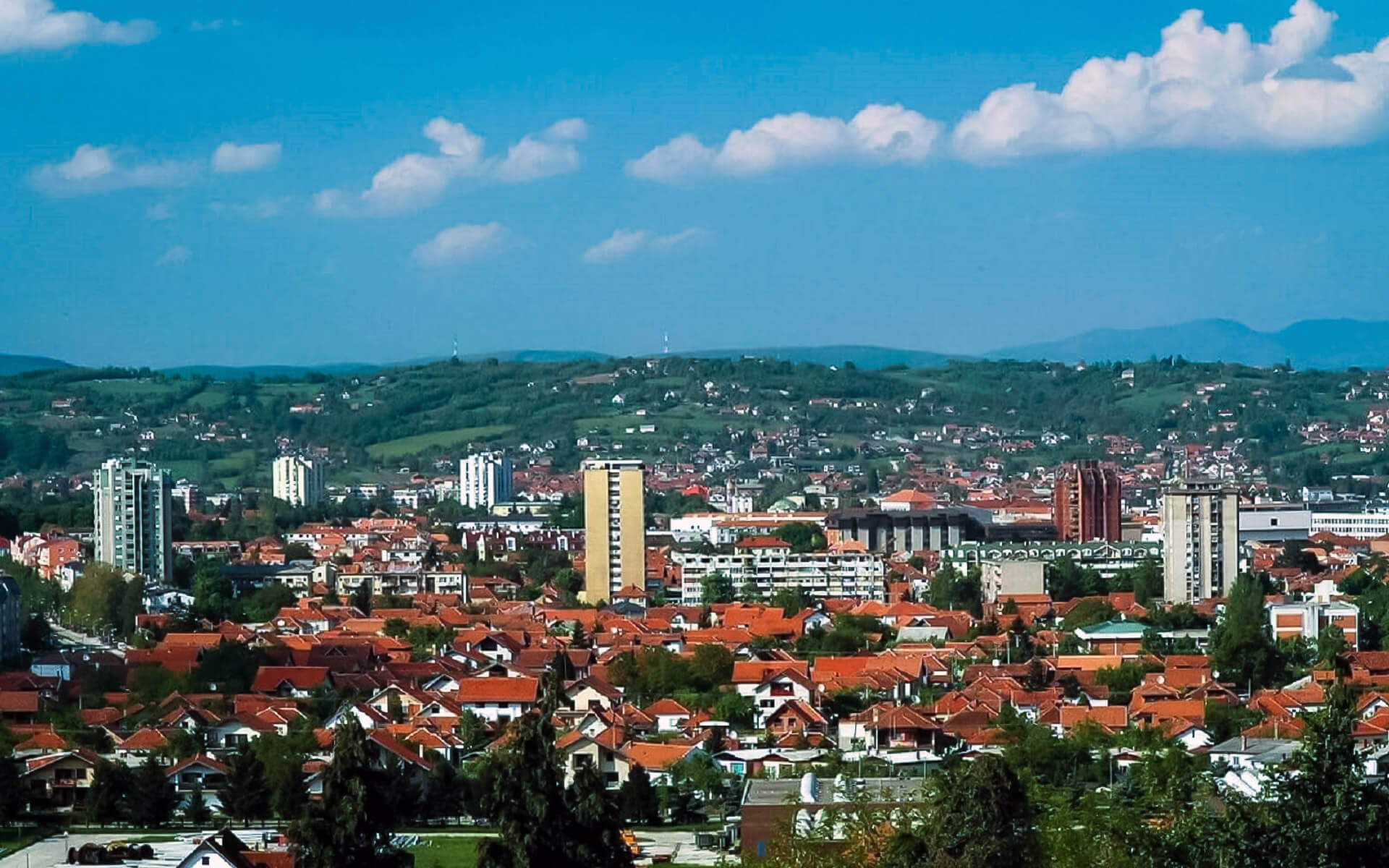 Čačak is a city in western Serbia and the administrative headquarters of the Moravica District. Čačak is located in the Čačak-Kraljevo valley, on the West Morava river, Serbia’s second biggest river after the Danube (308 km), and between Sumadija and the Dinaric Alps. The lowest point is 204 m (the junction of the rivers Bresnika reka and Zapadna Morava) and the highest point is 985 m (the highest summit of the Ovcar mountain). The city has a population of 73,331 people, while the municipality has a population of 115,337 people.

In its environs, the city boasts a unique morphological region, the Ovcar-Kablar Gorge, where 300 monasteries were erected since the 14th century, although only 12 exist now. This region is also known as “Serbian Mount Athos.” Čačak was given its present name in 1408; until to that, it was known as Gradac. Stracimir Zavidovic, the brother of Serbian monarch Stefan Nemanja, was one of Gradac’s commanders. He constructed the church of ‘Our Lady’ (Church of Jesus Ascension), which still remains in Čačak’s center. Following an earthquake that destroyed the church’s front, it was rebuilt from 2010 to 2011.

Čačak was a part of the Ottoman Empire from 1459, when Serbia lost its independence to the Ottomans, until 1718, and again from 1739 to 1878. It served as the Habsburg Empire’s southern settlement from 1718 and 1739. During the Second Serbian Uprising in 1815, Čačak was heavily fought over. A memorial honoring Tanasko Rajic, who died bravely while defending the city, today sits on the highest point of Ljubic hill, where the major fights of the rebellion were fought. In 1817, Serbia was granted autonomy inside the Ottoman Empire. Sixty-one years later, Serbia gained independence.

There are more than 20 churches and monasteries in the region of Čačak, the most found in such a tiny area in Serbia. They are cultural and historic landmarks of high importance. The most noteworthy are the Church of the Ascension of Jesus, a church on Ljubić hill dedicated to Saint Tsar Lazar, and the Vujan Monastery, which is situated on the same mountain. The monasteries of the Ovčar-Kablar Gorge, which date back to the Middle Ages as a cultural and historic whole, are of exceptional worth since they embody the uniqueness of the region’s cultural and artistic legacy developed over the ages. The gorge has 12 monasteries and churches:

Thermal and mineral springs with medical characteristics serve as the foundation for the growth of leisure tourism. Within the Čačak municipality, there are three spa resorts: Gornja Trepča, Ovčar Banja, and Slatinska Banja. Picnic areas include Gradina and the “Battle and Victory” park (also known as the “Spomen” (remembrance) park) on Jelica mountain, the Memorial complex on Ljubić hill, Grujine fields, rafts on the Zapadna Morava river in Beljina, Parmenac, Međuvršje, and Ovčar Banja, and picnic areas on the tiny rivers Dičina, Kamenica, Čemernica and Banja.

The municipality of Čačak is located in western central Serbia, 144 kilometers south of the capital city of Belgrade. Bosnia and Herzegovina is the closest international border. This municipality has all of the features of a key hub within the Moravica District. This municipality links the hills of Šumadija in the north and higher parts of the interior in the south. It is largely located in the western portion of the West Morava river’s flow. These mountains gently and wavyly slope toward the Čačak valley, town, and Morava River.

A humid continental climate has an average temperature of 10.47 degrees Celsius, 74.1 percent humidity, warm summers, and freezing winters. Winds blow from the north and northeast, but seldom from the west due to the mountains that obstruct them. The average temperature in August is 22 °C, while it is 0.5 °C in January. During the year, there are 38 days of snow on average. The average wind speed is 2.3 meters per second. The average number of foggy days per year is 54. There have been a few documented cases of Sahara desert sand finding its way to town through winds, causing issues for the town’s people, particularly in traffic. The average annual precipitation is 735 mm.

Agriculture, industry, commerce, and services make up the economic backbone of the municipality of Čačak. Aside from agricultural production, there is also paper production, electric home appliances, blade tools for metal, nonmetal, and wood processing, chemical industry products, thermal technical appliances, wood, metal, and combined carpentry, parts and kits for the pharmaceutical industry and products for medical needs, processing of forest and agricultural products, and so on.

Many enterprises with more than 250 workers have suffered as a result of the sanctions imposed in the 1990s. More than 40 government-owned firms have been privatized since 2000. Today, the only businesses with more than 500 workers on the Čačak municipality’s area are Sloboda Čačak and Fabrika reznog alata.

Private business, which has a long history dating back to the nineteenth century, is the dominant feature of the municipality’s economy. A substantial number of private enterprises expanded into middle-sized businesses with 80 to 270 people and a diverse product range.