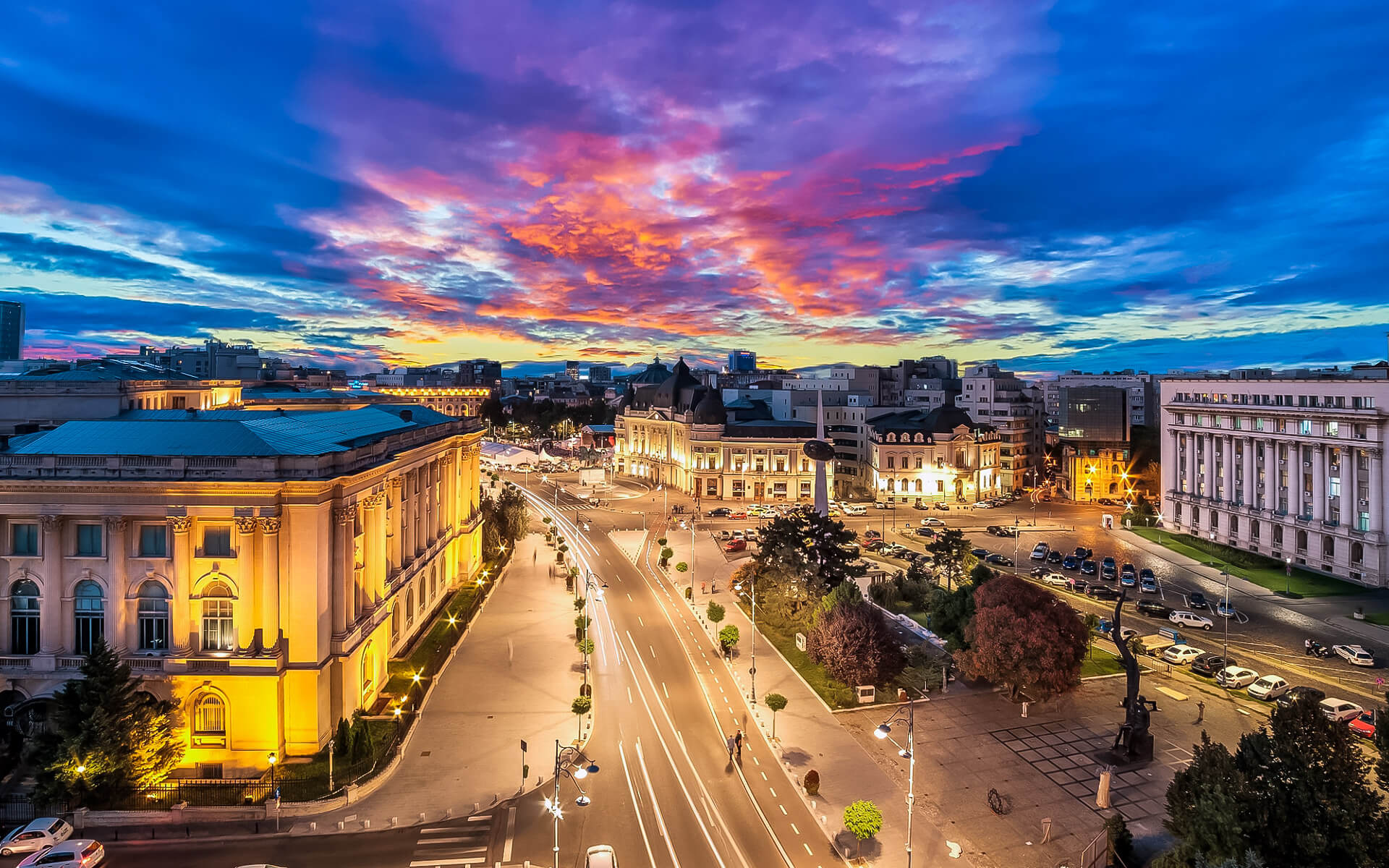 Bucharest is Romania’s capital and biggest city, as well as its cultural, industrial, and financial hub. It is situated in the country’s southeast, on the banks of the Dambovița River, some 60 kilometers (37.3 miles) north of the Danube River and the Bulgarian border.

Bucharest was referenced in papers for the first time in 1459. It became Romania’s capital in 1862 and is the epicenter of Romanian media, culture, and art. Its architecture is a mash-up of historical (neo-classical), interbellum (Bauhaus and art deco), communist-era, and contemporary elements.

During the interwar era, Bucharest received the moniker “Little Paris” due to its magnificent architecture and the refinement of its elite. Although many buildings and districts in the ancient city center were severely damaged or destroyed by war, earthquakes, and, most notably, Nicolae Ceausescu’s systematization program, many others survived. The city has had an economic and cultural boom in recent years.

Bucharest is the most rich city in Romania, and it is one of the most important industrial centers and transit hubs in Eastern Europe. There are large conference centers, educational institutions, cultural venues, historic “shopping arcades,” and leisure spaces in the city.

Bucharest is the main point of entry into Romania. Bucharest is a thriving metropolis, with numerous significant infrastructure projects transforming the city’s traditional look. Bucharest, once known as “Little Paris,” has evolved dramatically in recent years, and it is now a fascinating blend of old and modern that bears little resemblance to its prior image. In Bucharest, it’s normal to see a 300-year-old cathedral next to a steel-and-glass tower, both of which are close to a communist-style building. Bucharest has numerous wonderful attractions and has created a smart, stylish, and contemporary attitude that many have grown to anticipate from a European metropolis in recent years. Bucharest has benefitted from an economic boom, as well as EU funding, which have helped reconstruct areas of the city, notably the revitalized old town. Those who are familiar with Bucharest but have not come in a long time may be astonished by the changes that are going place. The spectacular Basarab overpass, Europe’s biggest cable bridge, is the largest project completed at this time.

In the summer, the average temperature is 23 degrees Celsius (73 degrees Fahrenheit) (the average for July and August) In mid-summer, temperatures in the city center regularly exceed 35 to 40 °C (95 to 104 °F).

Bucharest is located on the banks of the Dâmbovița River, which flows into the Argeș River, a Danube tributary. Lake Herăstrău, Lake Floreasca, Lake Tei, and Lake Colentina are among the most significant.

Bucharest is located on the Romanian Plain’s south-eastern corner, in a territory that was formerly covered by the Vlăsiei forest, which was destroyed to make way for a fertile flatland. Bucharest, like many other towns, is generally said to be constructed on seven hills, akin to Rome’s seven hills. Mihai Vodă, Dealul Mitropoliei, Radu Vodă, Cotroceni, Spirei, Văcărești, and Sf. Gheorghe Nou are Bucharest’s seven hills.

Bucharest is the economic and industrial heart of Romania. Citizens and businesses in Bucharest pay over one-third of all national taxes.

Following a period of relative stagnation in the 1990s, the city’s strong economic growth has revived infrastructure and resulted in the construction of retail malls, residential estates, and high-rise office buildings.

The economy of Bucharest is concentrated on industry and services, with services gaining in prominence in the previous 10 years. Bucharest is home to the headquarters of 186,000 businesses, including virtually all of Romania’s major corporations.

In Bucharest, foreign grocery brands including as Carrefour, Cora, and METRO operate. Every year, new supermarkets and hypermarkets appear throughout the city, resulting in a retail boom.

Luxury brands like as Louis Vuitton, Hermes, Gucci, Armani, Hugo Boss, Prada, Calvin Klein, Rolex, Burberry, and many more can be found in Bucharest. Since the late 1990s, malls and big retail centers such as AFI Palace Cotroceni, Sun Plaza, Băneasa Shopping City, Plaza Romania, Unirea Shopping Center, and Liberty Center have been erected. Traditional shopping arcades and marketplaces, such as the one in Obor, may be found.