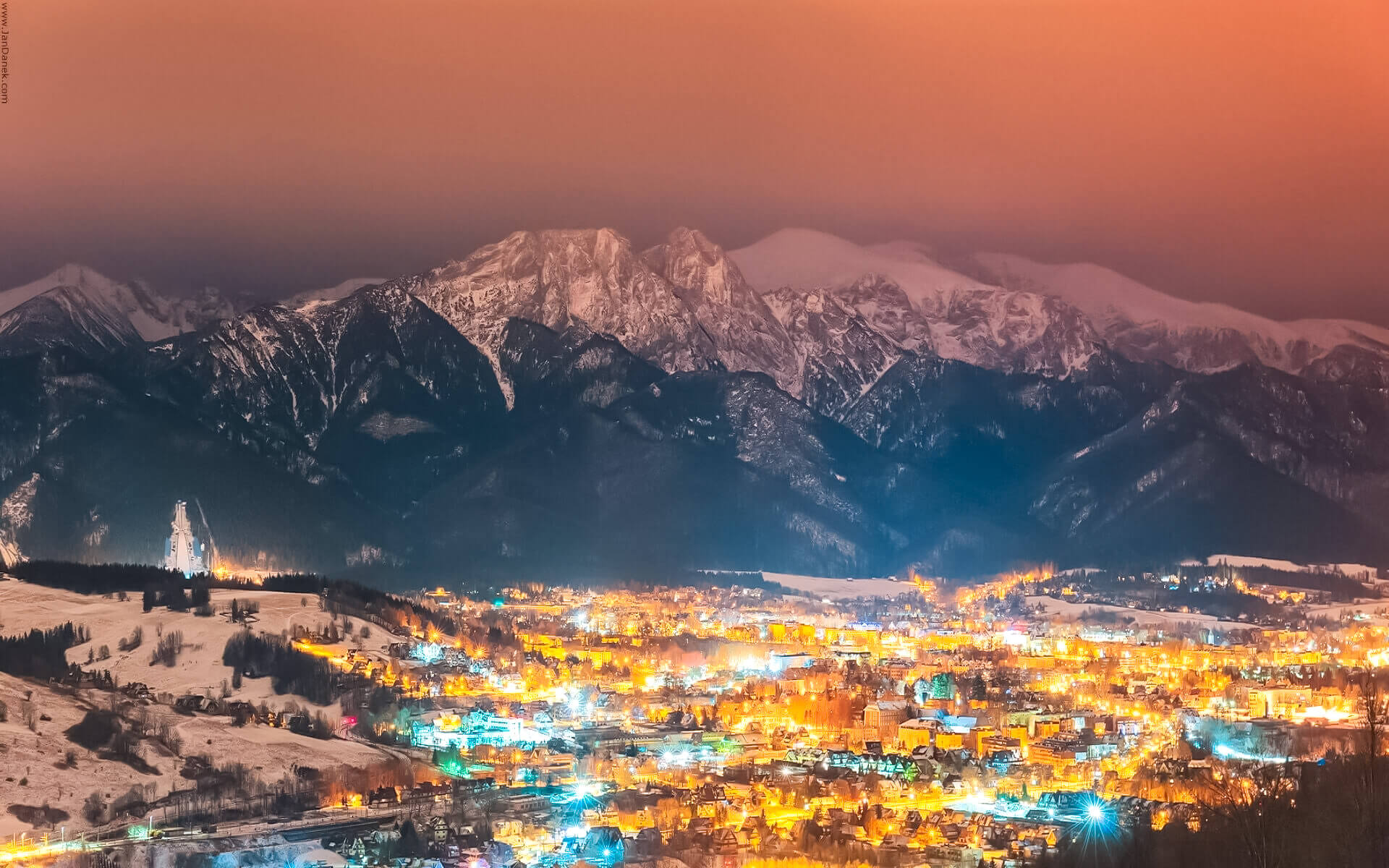 It is ideal for unwinding in between winter activities, hiking adventures, and mountain climbs. As Poland’s tallest city, it provides spectacular vistas and is an ideal starting place for outdoor pursuits. Apart from its stunning surroundings, it is also noted for its distinctive architecture and the culture of the Tatra highlanders, who are known for their vibrantly colored attire, distinct speech, folk dance, and traditional food.

For many years, the village at the foot of Mount Giewont has been one of the most popular summer and winter leisure destinations; there is something for everyone here. Mountain hikers of all abilities are encouraged along tourist hiking routes, while scenery enthusiasts may select between observation places such as the Krupowa lowlands or the summits of Antaówka or Gubaówka, from where the panorama of the high and western Tatras can be appreciated. Mountain hikes may be followed by a trip to the Aquapark in Zakopane.

You will not be disappointed if you enjoy concerts, exhibits, and theater. There isn’t a week that goes by without someone inviting you to an opening night at one of the numerous galleries and studios, or to a performance at the Witkacy Theatre. After satisfying the cultural self, it’s worth heading to one of the regional pubs and restaurants to refuel for the next intense day in Zakopane, a location where you can’t be bored!

Zakopane is readily accessible by bus or rail. You may get from any major Polish city with any of them. The car route passes via Zakopianka, which is well-known for its traffic bottlenecks. Skiers and snowboarders will discover There are several well-prepared slopes in Zakopane, including T-bar, chair, and gondola lifts. The most well-known locations are Kasprowy Wierch, Gubaówka, and Polana Szymoszkowa. There are several inns and taverns offering local specialties in ski resorts, both at the base and at the summit of slopes. Ski schools and ski equipment rentals are available near the lifts. The tourist infrastructure is quite well established. Zakopane has a wide range of lodging options at varying rates and standards.

When To Visit Zakopane?

JANUARY: The days are short and chilly, but the skiing is generally excellent. Schoolchildren enjoy their winter vacation during the turn of January and February, resulting in massive throngs of visitors and skiers everywhere in town and on slopes. Skiers prefer the end of February and the whole month of MARCH.

APRIL Mount Kasprowy is still covered with snow. In addition, hundreds of small crocuses bloom in the Tatra clearings throughout this month. MAY is a lovely springtime month. In JUNE, Zakopane quietens down, the days are long and mainly bright, and the mountain pathways welcome exhausted travellers.

The summer months of JULY and AUGUST are the busiest. The simpler paths get highly busy, and on bright days, there are lines of people waiting to climb the most popular summits. In the summer, the town comes alive with cultural and recreational activities, the most notable of which is the Mountain Folklore Festival, which has been held in the third week of August for over 40 years.

SEPTEMBER is an excellent month for hiking vacations since the days are still long enough, the weather is typically pleasant, and there are no more holiday crowds. OCTOBER COULD BE BOTH SUNNY AND COLD, WITH THE FIRST SNOWFALLS IN THE MOUNTAINS. NOVEMBER is a time for relaxation after a hectic tourist season. Some ski slopes have been open and fully groomed for skiers and snowboarders since the beginning of December.

Christmas in Zakopane is a one-of-a-kind experience. The village is wonderfully decked, generally with a thick layer of freshly fallen snow. Midnight Mass is welcomed at little wooden chapels along mountain routes. The New Year is celebrated outdoors with hundreds of bonfires lit up around the town. New Year’s Eve parties are held at pensions, hotels, and restaurants. At this time of year, the traditional sleigh rides KULIG are highly popular; horse pulled sleighs with lanterns can be seen and horse bells can be heard all across town.

Every year, around 2,500,000 tourists visit Zakopane. Winter sports activities popular among Zakopanes visitors include skiing, snowboarding, ski jumping, snowmobiling, sleigh rides, snowshoe treks, and ice skating. During the summer, tourists come to conduct sports like as hiking, climbing, biking, and horseback riding on the Tatras mountain, which has several paths. Tourists ride quads and dirt bikes, which may be rented. Swimming and boat trips on the Dunajec River are popular activities. Many visitors come to explore góral culture, which is rich in its distinct cuisine, dialect, architecture, music, and clothing styles. Zakopane is notably popular during the winter holidays, which are celebrated in traditional fashion with dances, decorated horse-drawn sleighs known as kuligs, and roast lamb.

A walk through the town’s main street, Krupówki, is a favorite tourist activity. It is surrounded by shops, restaurants, carnival attractions, and street entertainers.

During the winter and summer seasons, the Krupówki street becomes congested with visitors who visit stores and restaurants. In the summer, there is a local market along the Krupówki strip. The market vendors offer a wide range of items, including leather jackets, traditional góral attire, fur coats, shoes, and handbags. Venders also offer items like as the well-known smoked sheep cheese Oscypek, as well as fruits, vegetables, and meats. There are also several kiosks selling various Zakopane items.

Zakopane is well-known for its nightlife. People are usually strolling about town at night, checking out the various taverns and dancing clubs. The majority of these pubs and dance clubs can be found on Krupowki Street. In Zakopane, there are the following bars: Paparazzi, Cafe Piano, Anemone, Anemone, Cafe Antrakt, Literatka, Winoteka Pod Berlami, and Karczma u Ratownikow. Vavaboom, Finlandia Arctic, Genesis, Rockus, Morskie Oko, and Cocomo Go Go Club are all dance clubs in Zakopane.

Zakopane was featured in Andrzej Wajda’s film Man of Marble (Czowiek z marmuru), which introduced the town to a global audience.

The mountain sequences in the Bollywood film Fanaa were shot in and around Zakopane.

Zakopane is well-known for its superb skiing conditions. Skiing has been popular here for over a century, which is one of the reasons it has been dubbed the “cradle of Polish skiing” as well as the “Winter Capital of Poland” at the same time.

It has a variety of skiing options, ranging from basic slopes for novices to steep and challenging slopes for the more daring and expert skiers. There are now roughly 50 different ski lifts accessible, although the number is continually growing.

The best skiing conditions may be found in the Mount Kasprowy region. Kunice has a cable vehicle that takes you all the way to the summit. On its slopes, there are two chairlifts: Goryczkowa and Gsienicowa. Here, the ski season often lasts until early May. Gubaówka hill also has a well-known skiing facility. There is a funicular that takes you to the top of the hill, and there are a couple T-bar lifts farther up. There are floodlights and snow generating devices on the premises. Polana Szymoszkowa is another facility with great skiing conditions (next to the Mecure Kasprowy hotel). The slope is also illuminated and equipped with snowmaking equipment. There are two chairlifts in operation. Mount Nosal and Harenda are other popular destinations, both of which are illuminated and artificially snowy. It has a few hundred T-bar lifts and a chairlift. Novices may also ski on Koziniec, which has a lighting system and snowmaking infrastructure, although there are many more similar spots open to beginners across the town and surrounding region. Skiing is available at the surrounding settlements of Poronin, Bukowina Tatrzaska, and Biaka Tatrzaska.

Ski touring is ideal at Gubaówka and Magura Witowska. Because of the high elevations, they are tranquil and isolated areas where snow lasts far longer than everywhere else. Cross-country skiers can discover cross-country ski trails near Mount Krokiew (close to the ski jumps). There are some ski touring opportunities in the Tatra mountains as well.

Those who do not have their own equipment may simply hire it from one of the many ski rentals, and those who want to learn to ski can find certified skiing instructors on every hill.

Zakopane has also been a popular destination for professional skiers. In 1911, the first skiing tournament in Poland was organized in Zakopane, attracting 150 athletes from various nations. Simultaneously, ski jumping events have been organized, and it is Nordic skiing that has made Zakopane famous across the globe. Professional skiers from all around the globe have visited the town throughout the years.

The surrounding mountains and high heights are major elements determining local weather and climate. The average yearly temperature is about +5 degrees Celsius. The hottest month is July, with an average temperature of +15 degrees, while the coldest month is January, with an average temperature of -6 degrees. The average winds are light and blow from the west and south-west. Local fen wind, also known as halny, is a common phenomena in the fall, winter, and early spring. It is a rather warm and dry wind that blows from the south, from the direction of the mountains, at speeds that often surpass 100 km/h. It frequently causes a lot of damage and causes snow to melt fast. Halny often lasts a few hours to three or four days and has a negative impact on people’s moods. The average annual rainfall and snowfall is 1000 mm. The months with the most rainfall are June and July, which are also the months with the most thunderstorms. Snow often falls around November and melts in March or April. The finest skiing conditions in the mountains are in late winter or early spring, in March, April, or even as late as May. This is when the snow cover thickens the most.

September and October provide longer periods of pleasant and bright weather. Hiking is the most pleasurable activity at the time. The months of January and February are often distinguished by chilly yet bright winter weather. Temperature inversion often occurs, with temperatures a few degrees warmer in the top section of the mountains than in the lowlands.