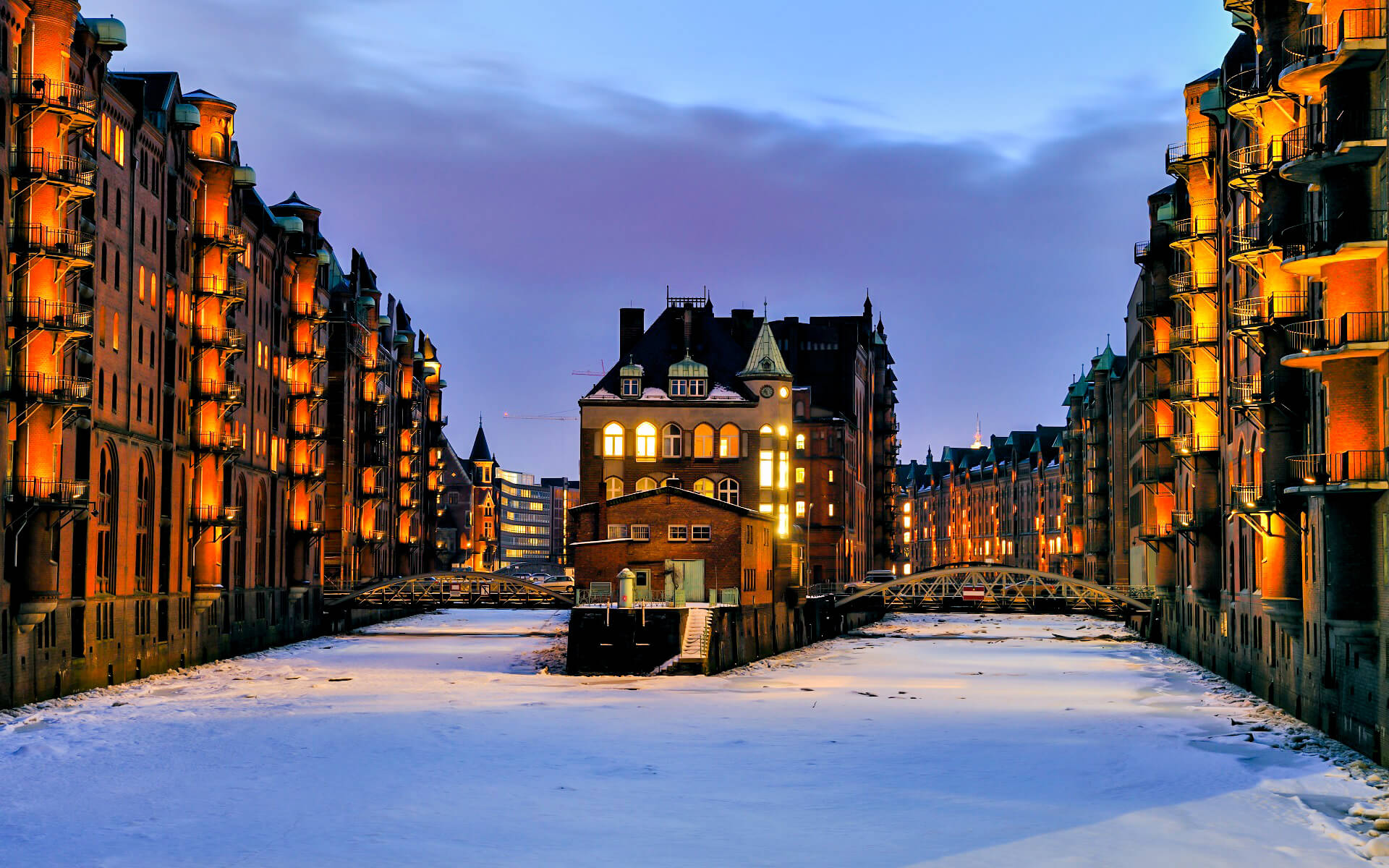 Hamburg (Free and Hanseatic City of Hamburg) is Germany’s second biggest city and the European Union’s eighth largest. It is the second-smallest German state in terms of land area. It has a population of about 1.7 million people, while the Hamburg Metropolitan Region (which includes portions of the neighboring Federal States of Lower Saxony and Schleswig-Holstein) has a population of more than 5 million. The city is located on the Elbe River.

The formal name reflects its history as a medieval Hanseatic League member, a free imperial city of the Holy Roman Empire, a city-state, and one of Germany’s 16 states. It was a completely independent state prior to Germany’s unification in 1871. Prior to the 1919 constitutional reforms, the civic republic was dominated by a class of hereditary great burghers known as Hanseaten.

Hamburg is a transportation center and Europe’s second biggest port, as well as a wealthy city. It has evolved into a media and industrial hub, including Airbus, Blohm + Voss, and Aurubis factories and facilities. Norddeutscher Rundfunk, as well as publishers such as Gruner + Jahr and Spiegel-Verlag, are foundations of Hamburg’s strong media business. For decades, Hamburg has been an important financial center, and it is home to the world’s second oldest bank, Berenberg Bank.

The city is a popular tourist attraction for both domestic and international tourists; in 2015, it was rated 16th in the world for livability.

In July 2015, UNESCO designated the Speicherstadt and Kontorhausviertel ensemble as a World Heritage Site.

Hamburg is home to around 40 theaters, 60 museums, and 100 music venues and clubs. More than 18 million people attended concerts, exhibits, theaters, cinemas, museums, and cultural events in 2005. The cultural industry, which includes music, performing arts, and literature, employed over 8,552 taxable enterprises (average size 3.16 workers). There are five innovative firms for every thousand citizens (as compared to three in Berlin and 37 in London). Hamburg participated in the European Green Capital Award system and was named European Green Capital for 2011.

In 2007, the city had over 3,985,105 tourists, including 7,402,423 overnight stays. The tourist business employs over 175,000 people full-time and generates almost €9 billion in revenue, making it a significant economic force in the Hamburg Metropolitan Region. Hamburg boasts one of Germany’s fastest-growing tourist businesses. Overnight stays in the city climbed by 55.2 percent between 2001 and 2007 (Berlin +52.7 percent, Mecklenburg-Western Pomerania +33 percent).

A typical Hamburg visit includes a tour of the city hall and the majestic St. Michaelis church (known as the Michel), as well as visits to the ancient warehouse neighborhood (Speicherstadt) and the harbour promenade (Landungsbrücken). These sites of interest are linked by sightseeing buses. Because Hamburg has one of the biggest harbors in the world, many tourists take one of the harbour and/or canal boat trips (Große Hafenrundfahrt, Fleetfahrt) that depart from the Landungsbrücken. Museums are also popular tourist locations.

The Reeperbahn neighborhood in St. Pauli is Europe’s biggest red light district, including strip clubs, brothels, pubs, and nightclubs. Hans Albers, a singer and performer, is closely identified with St. Pauli, and in the 1940s created the neighborhood’s unofficial song, “Auf der Reeperbahn Nachts um Halb Eins” (“On the Reeperbahn at Half Past Midnight”). Early in their careers, the Beatles spent time on the Reeperbahn. Others enjoy the relaxed neighborhood Schanze, with its street cafés, or a BBQ on one of the Elbe’s beaches. Carl Hagenbeck created Hamburg’s famed zoo, Tierpark Hagenbeck, in 1907 as the first zoo with moated, barless enclosures.

The oceanic climate (Cfb) of Hamburg is affected by its closeness to the shore and marine air masses that originate over the Atlantic Ocean. Wetlands nearby also have a marine moderate climate. Snowfall patterns have changed dramatically over the last several decades: whereas considerable precipitation occurred in the late 1970s and early 1980s, the winters of the 2000s were comparatively warm, with little or very little snowfall.

Hamburg is located on the Jutland Peninsula, between Continental Europe to the south and Scandinavia to the north, with the North Sea to the west and the Baltic Sea to the north-east. It is located at the junction of the Elbe, Alster, and Bille rivers. The city center revolves on the Binnenalster (“Inner Alster”) and Außenalster (“Outer Alster”), two lakes built by damming the River Alster. Hamburg also includes the island of Neuwerk and two other neighboring islands, Scharhörn and Nigehörn, in the Hamburg Wadden Sea National Park.

The neighborhoods of Neuenfelde, Cranz, Francop, and Finkenwerder are part of the Altes Land (old land) area, which is Central Europe’s biggest continuous fruit-producing region. The Hasselbrack, at 116.2 metres (381 feet) AMSL, is Hamburg’s highest point in Neugraben-Fischbek.

The gross domestic product (GDP) in 2007 was €85.9 billion. The city has a comparatively high employment rate, with over 120,000 enterprises employing 88 percent of the working-age population. Employees earned an average of €30,937 per year.

Contrary to what one would expect from a city with such a global outlook and media presence, Hamburg does not offer a lot of free WiFi hotspots. This is owing to unusual German law, which Hamburg’s senate chose to challenge in late 2014, with the objective of offering free wireless Internet access at least in the city center by 2020.

Until then, free WiFi is available at major railway stations (particularly the Hamburg-Altona and Hamburg-Hauptbahnhof) as well as select cafés and restaurants. Please keep in mind that not all gastronomy establishments provide free WiFi; double-check before you sit down to prevent disappointment. Another option is to just purchase a German prepaid SIM card; as of 2015, 1GB can be purchased for as little as EUR 10, and 5GB for as little as EUR 20. If you don’t want to carry two phones or replace the SIM card in your normal phone, you might purchase a separate WiFi gadget to insert the card into.