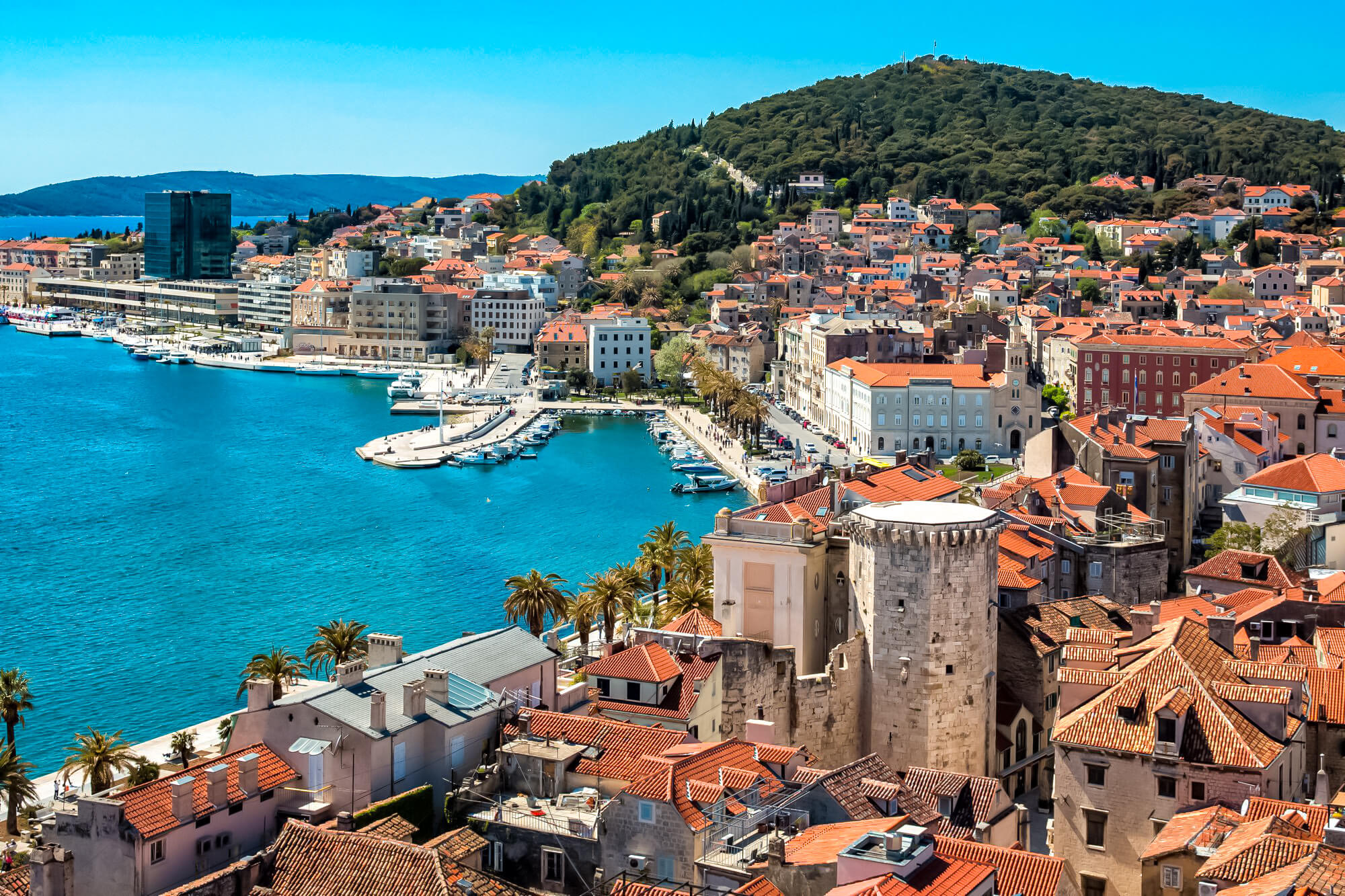 Split is Croatia’s second-biggest city and the major city in the Dalmatia region. It is located on the Adriatic Sea’s eastern bank and is centered around Emperor Diocletian’s Roman Palace. Split’s larger territory encompasses the nearby beach cities as well as a central peninsula and its surrounds. The city serves as a connection between various Adriatic islands and the Apennine peninsula, serving as an intraregional transportation hub and a popular tourist destination.

Split is one of the region’s oldest cities. The city was established as the Greek colony of Aspálathos (Ao) in the 4th century BC, some 2,400 years ago, and is typically thought to be little over 1,700 years old, dating from the erection of Diocletian’s Palace in 305 CE. It rose to prominence in 650 CE, when it superseded Salona as the old capital of the Roman province of Dalmatia: after the Sack of Salona by the Avars and Slavs, the Roman refugees settled in the fortified Palace of Diocletian. Split became a Byzantine city, eventually falling under the suzerainty of the Byzantine client, the Republic of Venice, and the Croatian Kingdom, with the Byzantines maintaining nominal control. Split was a free city during most of the High and Late Center Ages, trapped in the middle of a power struggle between Venice and the King of Hungary for control of the Dalmatian towns.

Venice finally triumphed, and Split remained a Venetian city, a highly defended enclave surrounded by Ottoman territory, until the early modern era. In the Morean War of 1699, the city’s hinterland was taken from the Ottomans, and in 1796, when Venice fell to Napoleon, the Treaty of Campo Formior gave the city to the Habsburg Monarchy. The Treaty of Pressburg included it into the Napoleonic Kingdom of Italy in 1805, and the Treaty of Schönbrunn incorporated it directly into the French Empire as part of the Illyrian Provinces in 1809. It was subsequently handed to the Austrian Empire after Napoleon’s defeat in 1814, and the city remained a part of the Austrian Kingdom of Dalmatia until 1918, when Austria-Hungary fell apart and Yugoslavia was formed. The city was occupied by Italy during World War II, then liberated by the Partisans following Italy’s defeat in 1943. It was re-occupied by Germany, who handed it over to its puppet state of Croatia. In 1944, the Partisans captured the city once again, and it became part of the postwar Federal Yugoslavia’s Croatian republic. During the Croatian War of Independence in 1991, Croatia seceded from Yugoslavia.

Split is the seat of the Split-Dalmatia county in Central Dalmatia, Croatia. The city was founded around the Diocletian palace (a palace/fort erected for the retiring Roman emperor Diocletian) years ago, where the inhabitants sought safety. The Roman walls, squares, and temples can still be seen as you walk around Split’s old center.

Split has a various nicknames, including “the most beautiful city in the world” and “Mediterranean flower,” due to its excellent environment, which has 2,800 hours of sunshine each year. Because so many notable Croatian athletes were born in Split, the city was dubbed “The Sportiest City in the World” by locals. The football club Hajduk is the most popular sporting institution. The club’s colors and emblem have been painted all around the city. Torcida, Europe’s oldest supporters organisation, founded in 1950, is in charge of this. The Dalmatian dog and a donkey are the city’s icons, in addition to the bell tower of St. Duje. Because of the donkey’s previous importance in field labor and transportation through the Dalmatian highlands, locals hold it in high respect.

Split’s winters are moderate, with temperatures above 0°C, although despite the traditional belief that the city only gets snow once every 30 years, at least one snowy day occurs virtually every year, typically in January or early February. Expect major traffic delays if you visit Split on a day when there has been substantial snowfall.

Split has a climate that is halfway between humid subtropical (Cfa) and Mediterranean (Csa), since only one summer month receives less than 40 millimetres (1.6 in) of rainfall, preventing it from being categorized as either humid subtropical or Mediterranean. Summers are hot and relatively dry, while winters are pleasant and moist (though the north wind may make winters seem chilly). Bura and its windchill factor – for example, if the air temperature is 5 degrees Celsius (41 degrees Fahrenheit) and a strong bura is blowing, it feels like -10 degrees Celsius (14 degrees Fahrenheit). More than 820 mm of rain falls on average each year (32.28 in). July is the warmest month, with typical high temperatures of roughly 30 degrees Celsius (86 degrees Fahrenheit). The coldest month is January, with an average low temperature of 5 °C (41 °F). November is the wettest month, with about 113 mm (4.45 in) of precipitation and 12 rainy days. The driest month is July, with a total precipitation of roughly 26 mm (1.02 in). The rainiest season is winter, however it may rain in Split at any time of year. Snow is uncommon; the months of December and January have averaged one snowy day since records started, while February has averaged two. Split experienced an abnormally big quantity of snow in February 2012, causing serious traffic disruptions. Split has around 2,600 hours of sunlight every year.

Split is located on a peninsula between the Gulf of Katela’s eastern end and the Split Channel. In the western side of the peninsula, the Marjan hill (178 m) rises. The ridges Kozjak (779 m) and Mosor (1339 m) divide the city from the hinterland and defend it from the north and northeast.

The biggest shipyard in Croatia is Brodosplit. It employs over 2,300 people and has produced approximately 350 vessels, including container ships, bulk carriers, dredgers, off-shore platforms, frigates, submarines, patrol boats, and passenger ships. Eighty percent of the ships manufactured are sold to foreign shipyards.

The new A1 highway, which connects Split to the rest of Croatia’s road network, has boosted economic activity and investment, with new enterprises springing up in the city center and its wide suburbs. In July 2005, the complete route was opened. Today, the city’s economy is mostly based on commerce and tourism, with certain older businesses like as food (fishing, olive, and wine production), paper, concrete, and chemicals seeing a resurgence. The Croatia Boat Show has been held in Split every year since 1998.

Internet cafés may be found throughout the city’s historic center.

There are numerous additional Internet cafés near the railway station, directly north of the waterfront. Ubuntu Linux is provided by one.

In the People’s Square, near to the Lacoste shop, there is free WiFi. Look for “Split Hotspot” in the search box.