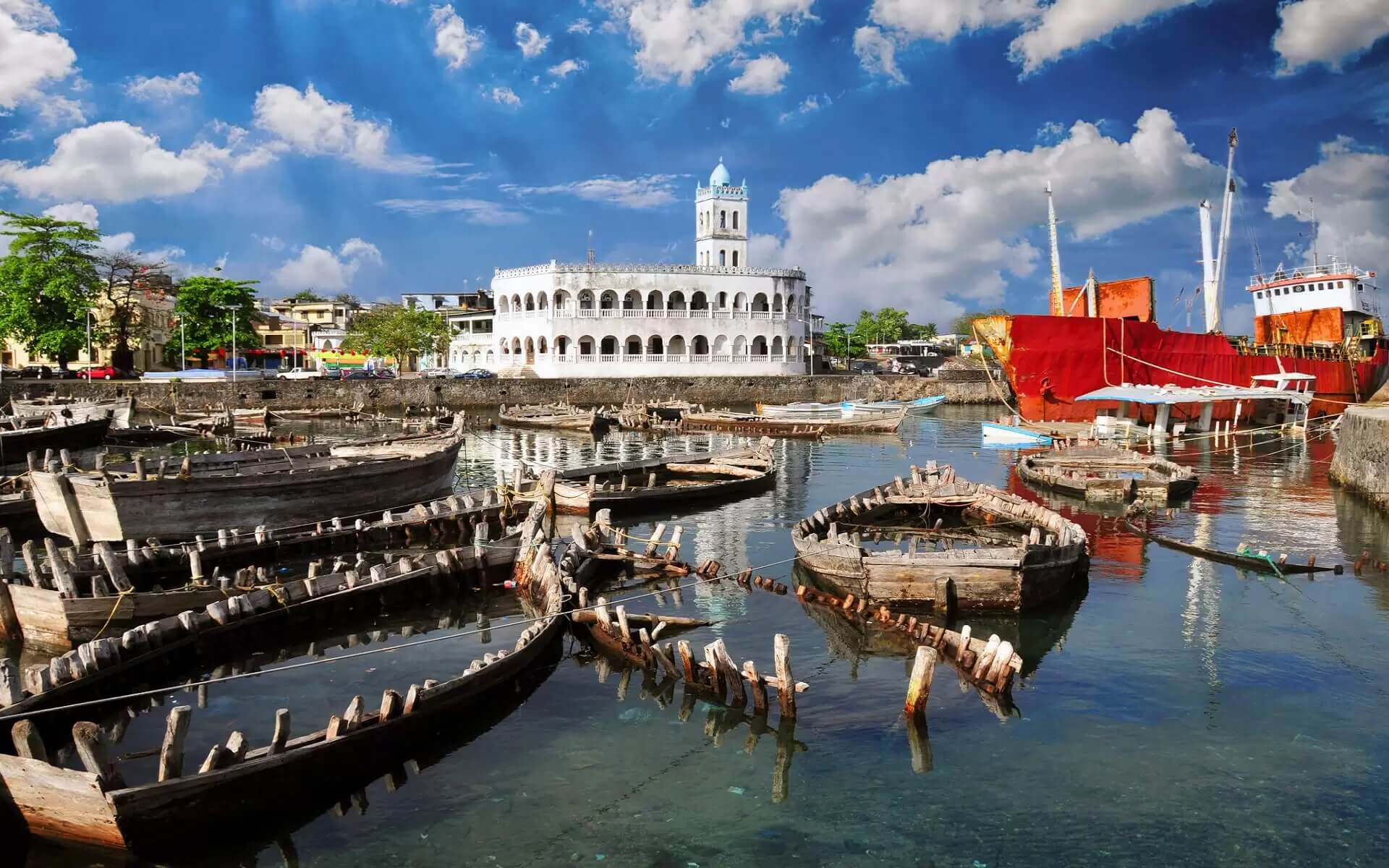 The Comoros are the third-smallest African nation by area, with 1,660 km2 (640 sq mi) omitting the disputed island of Mayotte. Excluding Mayotte, the population is projected to be 798,000 people. The archipelago is known for its varied culture and history as a country founded at a crossroads of many cultures. The archipelago was initially settled by Bantu speakers from East Africa, who were later joined by Arab and Austronesian immigrants.

It was a part of the French colonial empire in the nineteenth century before gaining independence in 1975. Since its declaration of independence, the country has had more than 20 coups or attempted coups, with numerous leaders of state killed. Along with this continual political instability, the Comoros have the greatest economic inequality of any nation, with a Gini coefficient of more than 60%, and rank in the worst quartile on the Human Development Index. In 2008, almost half of the population was living below the international poverty level of US$1.25 per day.

Comorian, Arabic, and French are the official languages of the Union of the Comoros. The bulk of the population practices Islam.

The country is made up of three large islands and several smaller islands, all of which are part of the volcanic Comoros archipelago. The largest islands are usually known by their French names: Grande Comore (Ngazidja) in the northwest, Mohéli (Mwali), and Anjouan in the southeast (Nzwani). Furthermore, the country claims a fourth major island, southeastern-most Mayotte (Maore), however Mayotte voted against independence from France in 1974, has never been ruled by an independent Comoros government, and remains under French administration (currently as an overseas department). France has blocked UN Security Council proposals that would recognize Comorian sovereignty over the island. In addition, Mayotte became an overseas department and a region of France in 2011 after a resoundingly successful vote.

The Comoros is the only country to be a member of the African Union, Francophonie, Organization of Islamic Cooperation, Arab League (of which it is the southernmost member, being the only Arab League member fully within the Southern Hemisphere), and Indian Ocean Commission.

The Comoros Archipelago is comprised of three main islands: Ngazidja (Grande Comore), Mwali (Mohéli), and Nzwani (Anjouan), as well as many smaller islets. Although the islands are officially recognized by their Comorian names, foreign sources continue to use their French names (given in parentheses above). Moroni, the capital and biggest city, is situated on Ngazidja. With no physical boundaries, the archipelago is located in the Indian Ocean, in the Mozambique Channel, between the African coast (nearest to Mozambique and Tanzania) and Madagascar.

It is one of the world’s smallest nations, with an area of 2,034 km2 (785 sq mi). The Comoros also claims 320 square kilometers (120 square miles) of territorial waters. The islands’ innards range from high mountains to modest hills.

Ngazidja is the biggest island in the Comoros Archipelago, with almost the same size as the other islands combined. It is also the most recent island, thus its soil is rocky. The island’s two volcanoes, Karthala (active) and La Grille (dormant), as well as the absence of suitable ports, are distinguishing features. Mwali is the smallest of the four main islands, with its capital at Fomboni. Nzwani, whose capital is Mutsamudu, has a triangle form due to three mountain ranges – Sima, Nioumakélé, and Jimilimé – originating from a central peak, Mount N’Tingui (1,575 m or 5,167 ft).

Volcanic activity created the islands of the Comoros Archipelago. Mount Karthala, an active shield volcano on Ngazidja, is the country’s highest peak, standing at 2,361 meters (7,748 feet) (2,362 m) It is home to the Comoros’ biggest area of vanishing rainforest. Karthala is one of the world’s most active volcanoes, with a small eruption in May 2006 and previous eruptions as recently as April 2005 and 1991. 40,000 people were evacuated during the 2005 eruption, which lasted from April 17 to April 19, and the crater lake in the volcano’s 3 by 4 km (1.9 by 2.5 mi) caldera was devastated.

The Comoros also claims the Îles Éparses or Îles éparses de l’océan Indien – Glorioso Islands, which include Grande Glorieuse, Île du Lys, Wreck Rock, South Rock, Verte Rocks (three islands), and three unidentified islets – as one of France’s overseas districts. Before 1975, the Glorioso Islands were governed by the colonial Comoros and are therefore sometimes considered part of the Comoros Archipelago. Banc du Geyser, a former island in the Comoros Archipelago that is now underwater, is physically situated in the Îles Éparses but was acquired by Madagascar as unclaimed territory in 1976. The Comoros and France continue to see the Banc du Geyser as part of the Glorioso Islands and therefore as part of their respective exclusive economic zones.

The climate is typically tropical and moderate, with the two primary seasons distinguished by the amount of rain they get. The average temperature in March, the hottest month in the rainy season (called kashkazi/kaskazi [meaning north monsoon], which runs from December to April), is 29–30 °C (84–86 °F), and an average low of 19 °C (66 °F) in the cool, dry season (kusi (meaning south monsoon), which runs from May to November). Cyclones are uncommon in the islands.

The Comoros, with a population of less than a million people, is one of the world’s least populous nations, but it is also one of the most densely inhabited, with an average of 275 persons per square kilometer (710/sq mi). In 2001, 34 percent of the population was classified as urban, although this figure is projected to rise as rural population growth slows and total population growth remains relatively strong.

Almost half of the Comoros’ population is under the age of 15. Moroni, Mutsamudu, Domoni, Fomboni, and Tsémbéhou are major urban hubs. In France, there are between 200,000 and 350,000 Comorians.

The Comoros islands are mostly of African-Arab heritage. There are also Malagasy (Christian) and Indian (primarily Ismaili) minorities, as well as minorities derived from early French immigrants. Chinese people may also be found in certain areas of Grande Comore (especially Moroni). The Comoros are home to a tiny white minority of French with additional European (Dutch, British, and Portuguese) heritage. Following independence in 1975, the majority of French people fled.

Sunni Islam is the main religion, with up to 98 percent of the people practicing it. Roman Catholicism is practiced by a minority of the Comoros’ population, mostly by immigrants from metropolitan France.