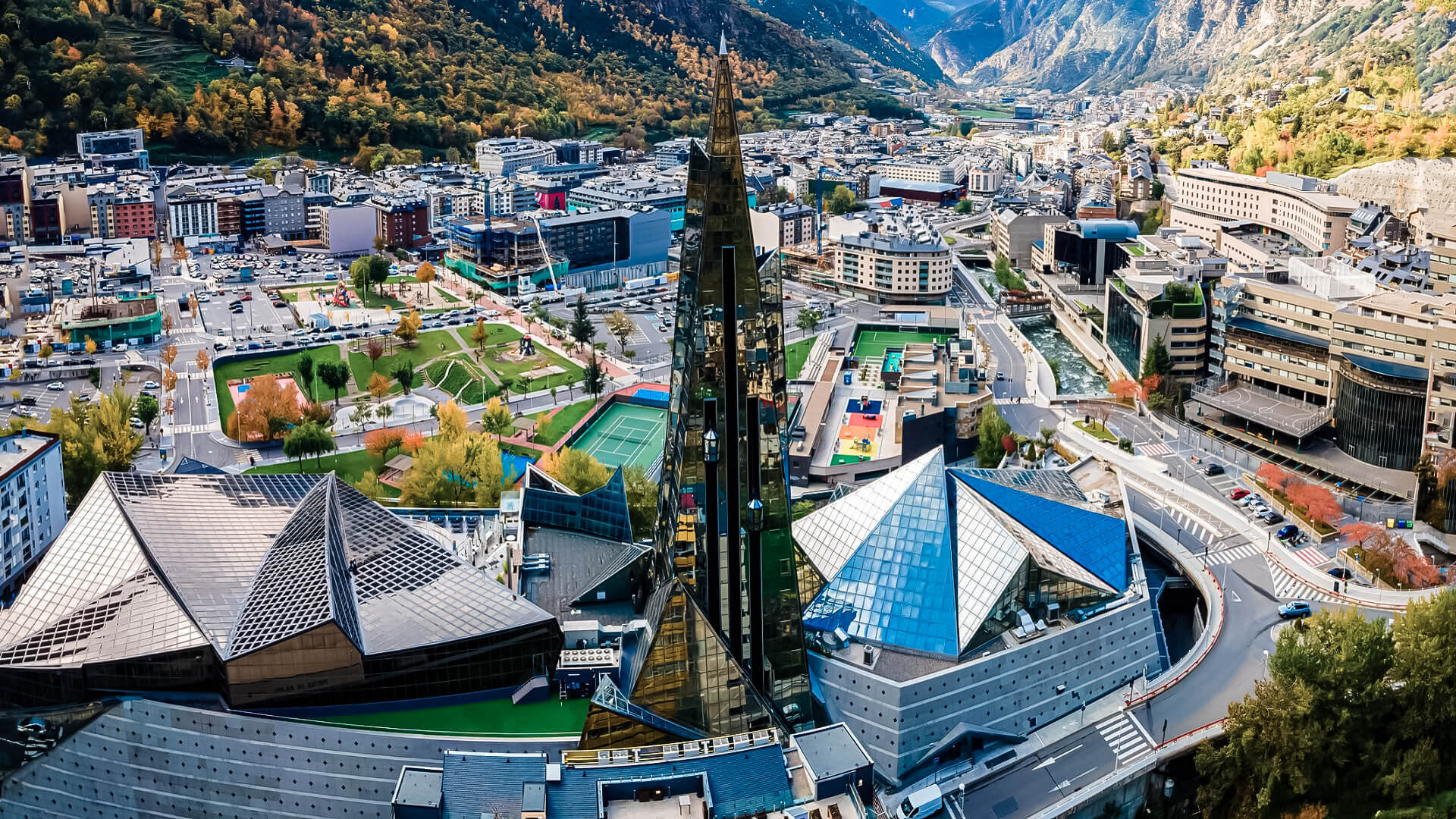 Andorra, commonly known as the Principality of the Valleys of Andorra, is a sovereign landlocked microstate in Southwestern Europe, situated in the eastern Pyrenees mountains and surrounded by Spain and France. The current principality was established in 1278 as a result of a charter granted in 988. It is referred to as a principality since it is a monarchy led by two Co-Princes: the Roman Catholic Bishop of Urgell in Spain and the President of France.

Andorra is Europe’s sixth-smallest country, with an area of 468 km2 (181 sq mi) and a population of about 85,000 people. Its capital, Andorra la Vella, is Europe’s highest capital, standing at 1,023 metres (3,356 feet) above sea level. Catalan is the official language, although Spanish, Portuguese, and French are all widely spoken.

Andorra’s tourist industry serves an estimated 10.2 million visitors each year. Despite the fact that it is not a member of the European Union, the euro is the official currency. Since 1993, it has been a member of the United Nations. According to The Lancet, the inhabitants of Andorra had the greatest life expectancy in the world in 2013, at 81 years.

Andorra is mostly made up of steep mountains due to its position in the eastern Pyrenees mountain range, with the highest peak being the Coma Pedrosa at 2,942 metres (9,652 ft). The average elevation of Andorra is 1,996 metres (6,549 ft). These are divided by three small Y-shaped valleys that merge into one when the major stream, the Gran Valirariver, exits the nation for Spain (at the lowest point of Andorra, 840 m or 2,756 ft). Andorra has a total land area of 468 km2 (181 sq mi).

Andorra is part of the Atlantic European province of the Circumboreal Region within the Boreal Kingdom. According to the WWF, Andorra’s land is part of the Pyrenees conifer and mixed woods ecoregion.

Andorra features both an alpine and a continental climate. Because of its greater elevation, it receives more snow in the winter, has lower humidity, and is somewhat cooler in the summer.

Two-thirds of inhabitants do not have Andorran nationality and are thus unable to vote in communal elections. Furthermore, they are not permitted to be elected president or to hold more than 33% of a privately owned company’s capital stock.

Andorra’s population is mostly Roman Catholic (88.2 percent). Our Lady of Meritxell is their patron saint. Though it is not an official state religion, the constitution recognizes a unique connection with the Catholic Church and grants it certain specific rights. The Anglican Church, the Unification Church, the New Apostolic Church, and Jehovah’s Witnesses are among the other Christian groups. North African immigrants make up the majority of the tiny Muslim community. Andorra has a tiny Hindu and Bahá’s population, as well as around 100 Jews.

Tourism, the backbone of Andorra’s small but prosperous economy, contributes for approximately 80% of GDP. An estimated 10.2 million visitors visit Andorra each year, drawn by the country’s duty-free status as well as its summer and winter resorts. Andorra’s comparative advantage has lately diminished as the economies of neighboring France and Spain have opened up, allowing for more product availability and reduced tariffs.

Tourism from ski resorts, which total approximately 175 km (109 mi) of ski terrain, is one of the major sources of revenue in Andorra. Currently, the sport attracts over 7 million people and generates an estimated 340 million euros each year, supporting 2000 direct and 10000 indirect employment.

With its tax haven status, the banking industry also contributes significantly to the economy (the financial and insurance sector accounts for approximately 19 percent of GDP). Five banking groups, one specialized credit organization, eight investment undertaking management entities, three asset management firms, and 29 insurance companies, 14 of which are subsidiaries of international insurance companies authorized to operate in the principality, make up the financial system.

Agricultural output is limited—only 2% of the land is arable—and the majority of food must be imported. Tobacco is cultivated locally in certain areas. Domestic sheep rearing is the most important livestock activity. The majority of manufacturing production is comprised of cigarettes, cigars, and furniture. Natural resources of Andorra include hydroelectric electricity, mineral water, wood, iron ore, and lead.

Andorra is not a member of the European Union, but it has a unique relationship with it that allows it to be regarded as an EU member for trade in manufactured goods (no tariffs) and as a non-EU member for agricultural products. Andorra lacked its own currency and relied on both the French franc and the Spanish peseta in financial operations until 31 December 1999, when both currencies were replaced by the euro, the EU’s single currency. Until December 31, 2002, coins and notes in both the franc and the peseta were legal currency in Andorra. Beginning in 2014, Andorra negotiated the issuance of its own euro coins.

Andorra has always maintained one of the lowest unemployment rates in the world. It was 2.9 percent in 2009.

Andorra has traditionally benefitted from its position as a tax haven, with all income generated solely via import duties. However, during the European sovereign-debt crisis of the twenty-first century, its tourist industry experienced a downturn, which was exacerbated by a decrease in Spanish goods prices, which undercut Andorran duty-free shopping. This resulted in an increase in unemployment. A 10% corporate tax was implemented on January 1, 2012, followed by a 2% sales tax a year later, which generated slightly over 14 million euros in its first quarter. On May 31, 2013, it was reported that Andorra planned to legislate for the implementation of an income tax by the end of June, against the backdrop of growing discontent among EU members with the presence of tax havens. The declaration came after a meeting in Paris between Antoni Marti, the Head of Government, and François Hollande, the French President and Prince of Andorra. Hollande praised the decision as part of Andorra’s efforts to “bring its taxes in line with international norms.”

By planeAndorra does not have any airports. La Seu d'Urgell Airport (IATA: LEU) is located 12 kilometers (7 miles) to the south. The airport, which is controlled by the Catalan government, serves as the primary hub for Air Andorra and Andorra Airlines. Scheduled and charter flights have been operating...

If you just have a few days in Andorra, the local bus service run by Cooperativa Interurbana Andorrana, S.A. allows you to see most of the major settlements.There are eight major bus routes, or 'lnies,' which all travel through Andorra La Vella. The price ranges from €1.20 to €3...

Ski ResortsThe majority of these resorts were originally tiny mountain towns that grew in recent years as a result of skiing. In recent years, the resorts have merged such that your ski ticket now includes access to neighboring regions. As a consequence, two major alpine skiing regions have emerged:...

Andorra's currency is the euro. It is one of many European nations that utilize the Euro. All euro banknotes and coins are legal tender across the EU.One euro is made up of 100 cents.The euro's official sign is €, and its ISO code is EUR. The cent does not...

InternetAndorra is a well-connected nation that has embraced the Internet. The Internet has almost as many subscribers as landline phones. Free public wifi is accessible in many large cities, and many eateries provide it as well.Postal servicesAndorra is reliant on the postal networks of Spain and France. Both have...

Catalan is the official and historic language. As a result, the culture is Catalan, with its own distinctiveness.Folk dances such as the contrapàs and marratxa may still be seen in Andorra, particularly in Sant Julià de Lria. Andorran folk music is comparable to that of its neighbors, but it...

In Andorra, there isn't much danger from other people, but be careful on the mountains. Don't go too high until you know what you're doing.Drivers are advised to avoid crossing back into France if the Spanish side of the Pyrenees has had lovely bright sunlight all day and the...