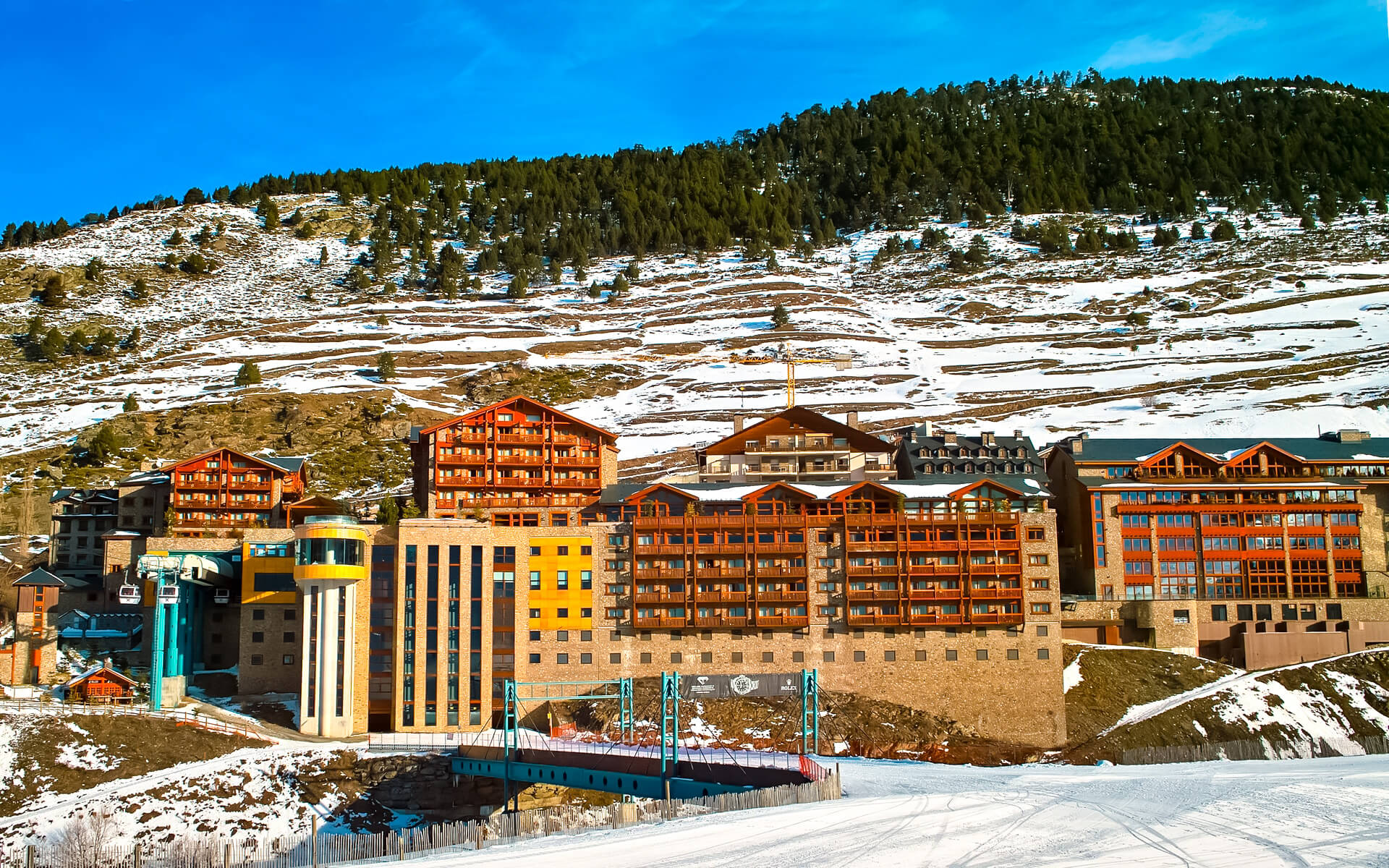 Soldeu and El Tarter are located in the parish (administrative division) of Canillo, some 17 kilometers northeast of Andorra’s capital, between Andorra La Vella and the French border at Pas de la Casa (2085m). Soldeu and El Tarter (neighbor settlements) are active, excellent value for money, contemporary and welcoming, and have some of the greatest skiing and snowboarding facilities in Andorra. During the summer, Soldeu is popular with hikers and golfers who enjoy the picturesque environment. The weather in Soldeu changes considerably in the winter, with great snow conditions giving good terrain for skiing and snowboarding.

Andorra’s ski capital is Soldeu. At a base height of 1,800m in Grandvalira, Andorra’s largest ski zone, Soldeu is a lovely hamlet and active ski resort that is much less rowdy than adjacent Pas de la Casa.

The Grandvalira, which includes Pas de la Casa, Soldeu, and El Tarter, is Andorra’s biggest, tallest, and most popular ski area. El Tarter is the more traditional of the two villages, whereas Soldeu is the bigger and livelier of the two. Despite being only around the corner from Pas de la Casa, Soldeu and El Tarter have a considerably more peaceful and family friendly air, and they have effectively removed the villages from Andorra’s cheap and cheerful heavy partying image that it developed in the 1990s.

The resorts are now presenting themselves as a real alternative to the higher Alpine destinations, and we find it difficult to disagree. With over 200 kilometers of slopes, a dizzying assortment of off-piste activities, and a growing reputation for freestyle and freeriding, there is more than enough to keep everyone engaged for a week’s vacation.

The majority of the off-slope activities and facilities are concentrated around Soldeu’s main street, whilst El Tarter is more residential, making it ideal for a peaceful family vacation. Both communities remain reasonably tiny (particularly when compared to some of the Alps’ monstrosities), and with lifts and runs finishing right in the center, you’ll never be far from your hotel (or a bar!) at the end of the day.

Transfers are on the lengthy side, averaging 3 12 hours, but you’ll make up for lost time when you reach in resort, and you’ll quickly come to appreciate the fast lift system and absence of crowds. It’s also a wonderful spot to learn to ski. All of the local ski schools have large English and antipodean contingents, so youngsters learning to ski for the first time will feel completely at home.

Soldeu really has something for everyone. There are over 60 green and blue ski slopes as well as dedicated beginner zones at Soldeu and El Tarter, so there are plenty of pistes for both beginners and advanced skiers and snowboarders to enjoy. Intermediate and experienced skiers will enjoy the 210km of various slopes over the enormous ski domain, including 38 red pistes and 22 black pistes, as well as exploring the 6 separate ski sectors. The route and variety of hills between Soldeu and Pas de la Casa are spectacular.

El Tarter boasts a massive freestyle park with a wide variety of kickers, rails, boxes, and features. For convenient access, there is a chairlift and a drag lift that run up beside the park. The El Tarter snow park has a superb park personnel that maintains the freestyle sections in good condition and ready for the professional contests that take place throughout the season.

Snowboarders will like the diversity of slopes available at the Grandvalira ski resort, as well as the park, boardercross, and freeride zones.

The ideal time to ski at Soldeu is between December and April. Snowfall is often excellent at Grandvalira, with snow bases peaking at roughly 200cm in March. Over 1 billion Euros has been invested in recent years over the Grandvalira ski domain to enhance ski lifts, build new facilities, and expand snow cannon coverage (now 65 percent of the ski area).

Because the Pyrenees have a shorter winter, the ideal time to visit Soldeu-El Tarter (and Andorra in general) is generally at the height of the season. The snow is at its finest between January and March, and you won’t see as many people as you would in the Alps. Recent advancements in snowmaking facilities guarantee that the snow tends to stick around for longer these days, and if the snow becomes a little iffy later in the season, remember to take your sunnies and some sunscreen. With a reputation for having some of the greatest weather in Europe, you’ll be tempted to just pop open a cold one and spend the day soaking up the rays.

Families in Soldeu and El Tarter

Soldeu-El Tarter is one of the greatest in the business. Book the whole family into a low-cost ski package and spend the week improving swiftly and, more importantly, having fun on the slopes.

The ski schools in Soldeu and El Tarter are well-known for their excellent British-run courses, so anybody learning for the first time will feel perfectly at home.

There is a big expanse of cruisey blue lines just above Soldeu to gain confidence on, and if more experienced skiers want a challenge on some of Andorra’s highest pistes, the Grandvalira is theirs to wander (watch out for the Avet World Cup slope and El Tarter’s snowpark).

Keep a look out for special family discounts in the resort – in past years, the ticket office and ski school collaborated to give low packages for 6-12 year olds, and under 6s may occasionally obtain a free lift pass if you present ID at the ticket office.

The nurseries in Soldeu and El Tarter cater to 2-4 year olds with an indoor play space and supervised snow activities, while the Snow Garden club introduces 4-5 year olds to the snow with enjoyable ski instruction and outdoor play. The ski school educates children aged 6 to 11, and children above the age of 12 may sign up for snowboard training if they wish to learn something new.

When you want to go away from Grandvalira’s 200km+ of skiing, Snowpark El Tarter (the largest park in the Pyrenees) and the Encamp freeride area should be more than enough.

With the largest ski region in Andorra to explore, Soldeu and El Tarter are ideal locations for a low-cost group ski vacation. Beginners can find lots of simple blues and tuition with British instructors, while more experienced skiers and snowboarders will find over 200km of pistes, three snowparks (the largest in the nation), and specifically designated freeride zones.

El Tarter is the smaller and calmer of the two settlements, whereas Soldeu boasts a wider range of pubs and restaurants: The Harp is all you’d expect from a real Irish tavern, while the Aspen is open until the early hours of the morning. We have a large range of hotels in both villages, and they’re a wonderful alternative for parties that want the solitude of their own rooms but large shared spaces to relax in. Self-catering is another alternative that keeps prices low and allows the week to be flexible enough to meet everyone’s specific demands. If your company is large enough, rent a catered chalet and rule the roost, with six days of sit-down meals taken care of.

If you plan on bringing non-skiers along for the journey, they should have enough to do. A half-hour bus trip brings you to Andorra’s capital city, Andorra La Vella, for duty-free shopping and historical monuments such as the 9th century Església de Santa Coloma and the 16th century Casa de la Vall (now used for parliament).