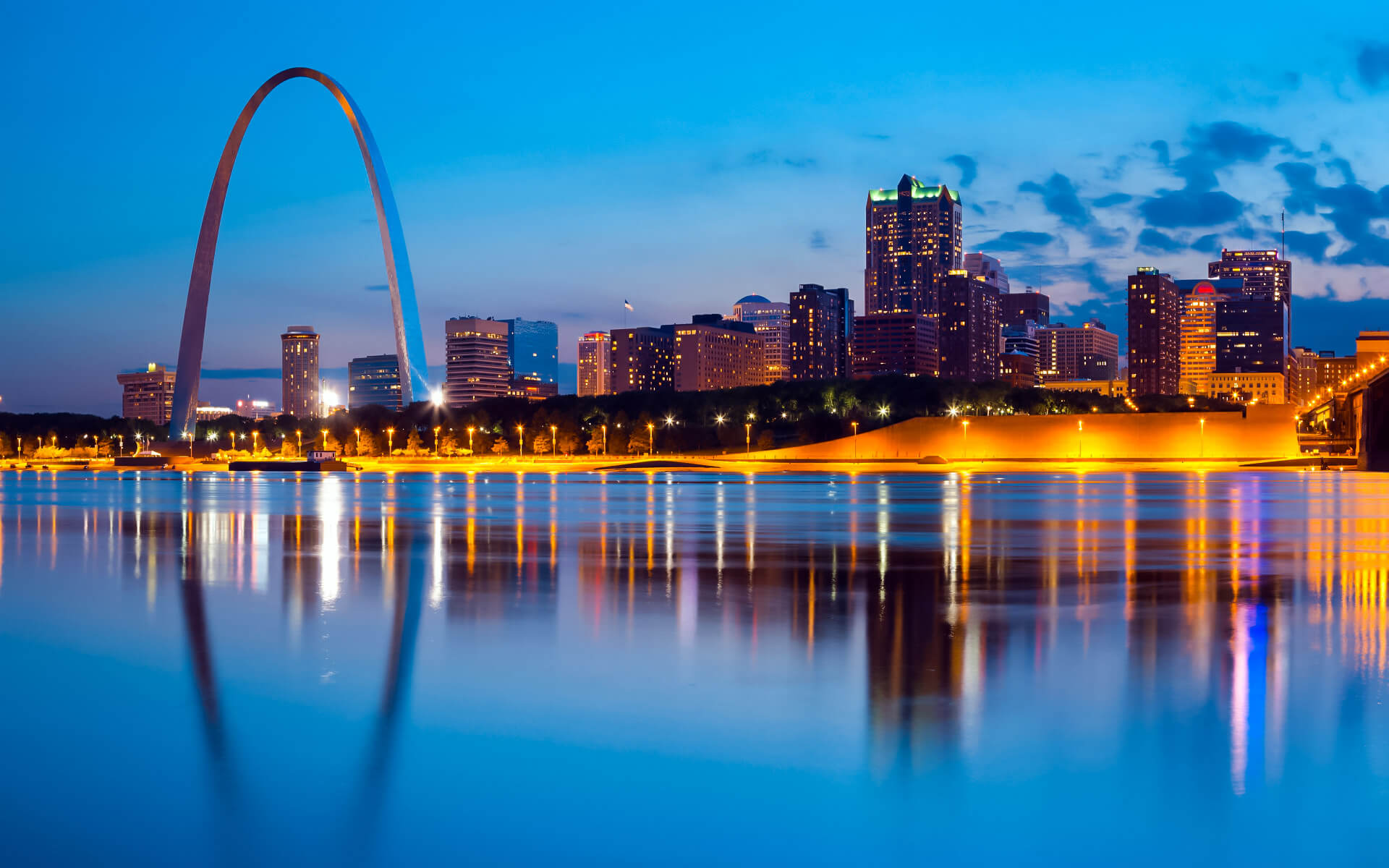 St. Louis is a self-contained metropolis and inland port in the United States of America’s state of Missouri. The city grew along the Mississippi River’s western bank, which serves as Missouri’s boundary with Illinois. St. Louis had a population of 319,294 in 2010 and 315,685 in 2015, making it the 60th-most populated city in the United States and the second-largest city in Missouri after Kansas City. With an estimated population of 2,916,447, the St. Louis metropolitan area is the biggest in Missouri and the nineteenth largest in the United States. St. Louis was established in 1764 by fur merchants Pierre Laclède and Auguste Chouteau and was named after France’s Louis IX. Claimed first by the French, who settled mostly east of the Mississippi River, the land around the city was given to Spain after France’s loss in the Seven Years’ War. It relinquished its territory east of the Mississippi to the victorious Kingdom of Great Britain. From 1762 until 1803, the region that is now Missouri was part of Spanish Louisiana; the French convinced King Charles IV of Spain to relinquish Louisiana to France in 1800, but the Spanish remained to administer the country until the Louisiana Purchase in 1803.

St. Louis emerged as a prominent port on the Mississippi River when the United States acquired this land in the Louisiana Purchase. St. Louis was the fourth-largest city in the United States in the late nineteenth century. In 1877, it seceded from St. Louis County, establishing itself as an independent city with its own governmental borders. It was the site of the Louisiana Purchase Exposition and Summer Olympics in 1904. Immigration has surged, and the city is now home to the world’s biggest Bosnian community outside of their motherland.

St. Louis’ economy is based on service, manufacturing, commerce, freight transportation, and tourism. The city is home to many Fortune 500 companies, including Anheuser-Busch, Express Scripts, Peabody Energy, Ameren, Ralcorp, Monsanto, and Sigma-Aldrich, in addition to a sizable medical and scientific population. St. Louis is home to two major sports teams: the Major League Baseball’s St. Louis Cardinals and the National Hockey League’s St. Louis Blues. The city is often associated with the 630-foot-tall (192 m) Gateway Arch in Downtown St. Louis.

St. Louis, the Gateway City, epitomizes the contemporary Midwestern city. Missouri’s second-largest city is dynamic yet relaxed, crowded but manageable, and historically significant but still relevant. The city’s designers have built a visually pleasing metropolis, with ample green space nestled among historic and modern structures and framed by the gorgeous Mississippi and Missouri rivers. And above it all stands the Gateway Arch, the world’s highest man-made structure.

St. Louis is a cultural mecca that is surprisingly affordable. Only Washington, D.C., among American cities, boasts more free attractions for visitors and locals alike. Hotels, restaurants, and even parking garages are not subject to the premium price associated with other major cities. Although sometimes ignored, St. Louis may be (and frequently is!) a cheap, instructive, and enjoyable family vacation destination!

The city is named after France’s King Louis IX. St. Louis is affectionately referred to as The Gateway to the West. The settlement served as the last major halt for pioneers on route to the Pacific coast. Due to its location at the junction of the Mississippi and Missouri rivers, the city also played a significant role throughout the steamboat period. St. Louis was purchased from France by the United States in 1803 as part of President Thomas Jefferson’s Louisiana Purchase. The formal transfer of authority from Spain occurred at a ceremony dubbed “Three Flags Day.” The Spanish flag was down on March 8, 1804, and the French flag was raised. On March 10, the French flag was replaced with the one of the United States of America. St. Louis held the World’s Fair and the Summer Olympic Games in 1904. Many of St. Louis’s parks, structures, and nicer residences were constructed during this time period. While few, if any, surviving inhabitants attended the Fair, it had a significant role in the city’s contemporary growth.

Prior to Detroit being the automotive hub of the United States, St. Louis was the leading manufacturer of vehicles in the early twentieth century. Many of the old warehouses and factories remain in Midtown and Downtown, but the majority have been transformed into loft residences, stores, and restaurants. In the early 1900s, St. Louis also had a thriving apparel manufacturing business, concentrated on Washington Avenue downtown. As was the case with the car sector, the remaining vestiges of the garment manufacturing industry may be seen in freshly renovated warehouses that now house new enterprises and loft apartments. St. Louis started its shift from a manufacturing and industrial economy to a worldwide recognized center for research in Medicine, Biotechnology, and other disciplines in the late twentieth century. St. Louis is home to companies such as Monsanto, Centene, Solae, Energizer, Enterprise Rent-A-Car, Edward Jones, Wells Fargo Advisors (previously A.G. Edwards), and Anheuser-Busch/Inbev. AT&T and Bank of America both have significant regional operations here. Washington University in St. Louis and Saint Louis University, two prominent private research institutions, are critical components of the local economy and society.

St. Louis is actually a metropolis of communities, each with a unique taste and culture of its own. Within the City of St. Louis, there are 79 government-designated neighborhoods, several of which have organizations and councils that wield broad influence over development and subsidies from the highest to the lowest local levels. Certain areas have streets lined with large stone homes erected as palaces for visiting heads of state during the 1904 World’s Fair and now inhabited by some of the city’s wealthiest families and people. Other areas are largely middle- and working-class, with a 200-year-old cultural identity. Today, the majority of them continue to exist as strong, coherent communities for their citizens.

Without mountains or huge bodies of water to help regulate the climate, St. Louis suffers temperature extremes on both ends of the spectrum. Winter cold from December to March, as well as Summer heat from June to September, may be hard on the untrained body. The Mississippi River makes this region humid, despite the normally mild weather. At any time of year, storms may occur. July and August are the warmest and most humid months, whereas January and February are chilly with snow on occasion. Normal temperatures vary from 21°F to 90°F (-6°C to 32°C), however summer highs of 100°F and winter lows of 0°F (38°C and -18°C) are not unusual.

St. Louis has a total area of 66 square miles (170 km2), of which 62 square miles (160 km2) is land and 4.1 square miles (11 km2) is water (6.2 percent). (While not displayed on typical city maps, the city owns the property near its airport, which is serviced by the city’s fire department and other departments, and serves as an exclave of St. Louis.) The city is mostly constructed on bluffs and terraces that rise 100–200 feet above the Mississippi River’s western banks in the Midwestern United States, just south of the Missouri-Mississippi confluence. The majority of the land is covered by a rich, gently sloping plains with low hills and large, shallow valleys. Both the Mississippi and Missouri rivers have carved out extensive valleys with broad flood basins.

The region is underlain by Mississippian limestone and dolomite, and portions of the city are karst in nature. This is especially true of the region south of downtown, which is densely forested and home to several sinkholes and caverns. Although the majority of the city’s tunnels have been sealed, many springs can be seen along the riverbank. The city previously mined coal, brick clay, and millerite ore. The dominating surface rock, known as St. Louis limestone, is utilized in building as dimension stone and rubble.

The River des Peres is located near the city of St. Louis’s southern border (which separates it from St. Louis County). It is almost the only river or stream inside the municipal boundaries that is not fully subterranean. In the 1920s and early 1930s, the majority of the River des Peres was channelized or submerged. The river’s lower segment had some of the greatest flooding during the Great Flood of 1993.

The Mississippi River, which divides Missouri and Illinois, is the city’s eastern border. Except for a few spots where the river has altered its course, the Missouri River marks the northern boundary of St. Louis County. The Meramec River runs along the majority of its southern border.