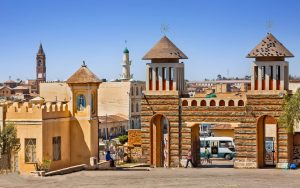 EritreaAsmaraHow To Travel To Asmara

Asmara International Airport As of 2008, Lufthansa serviced Frankfurt three times weekly; Yemenia Airways served Sanaa twice weekly; Egyptair served Cairo twice weekly; and Saudi Arabian Airlines served Jeddah/Riyadh twice weekly. Eritrean Airlines does not operate any flights as of January 2010. Nasair, a private-state joint venture airline located in Massawa, serviced a few regional cities like as Jeddah, Nairobi, Dubai, and Khartoum, as well as local airports Assab and Massawa, as of January 2010. If you do not have a local resident ID, you must pay an airport departure tax of US$20 or €15 in foreign currencies.

If you enter the country without a visa and have an Eritrean ID card in addition to a foreign passport, you must register with the Immigration and Nationality office in Asmara within seven working days after your arrival.

Both Eritrea and Ethiopia retain significant military forces along the border, and all border crossings into Ethiopia from Eritrea remain blocked.

If you're only in Asmara for a short time, the best thing to do once you've finished touring in the city is to travel to the outskirts, where the landscape is at the very least breathtaking. Unless you are from a high altitude location, you will require a few of...

Gold and silver jewelry are inexpensive in Asmara and are unquestionably a steal by global standards. The same goes for frankincense and myrrh (if you have any use for them). Otherwise, most visitors purchase local home-spun and gold-thread embroidered cotton clothes, traditional goat-skin rugs, olivewood sculptures, clay coffee-pots, and other...

Asmara's nightlife is frequently seen as calmer than that of most other nation capitals, however there is a decent selection of local bars. Prostitution is legal and widespread. Mocambo, Downtown (Look for the basement).  Warsai. It's a bit out of the way and a little sleazy.Asmara Palace Hotel's Green Pub. On Wednesday, Friday, and...