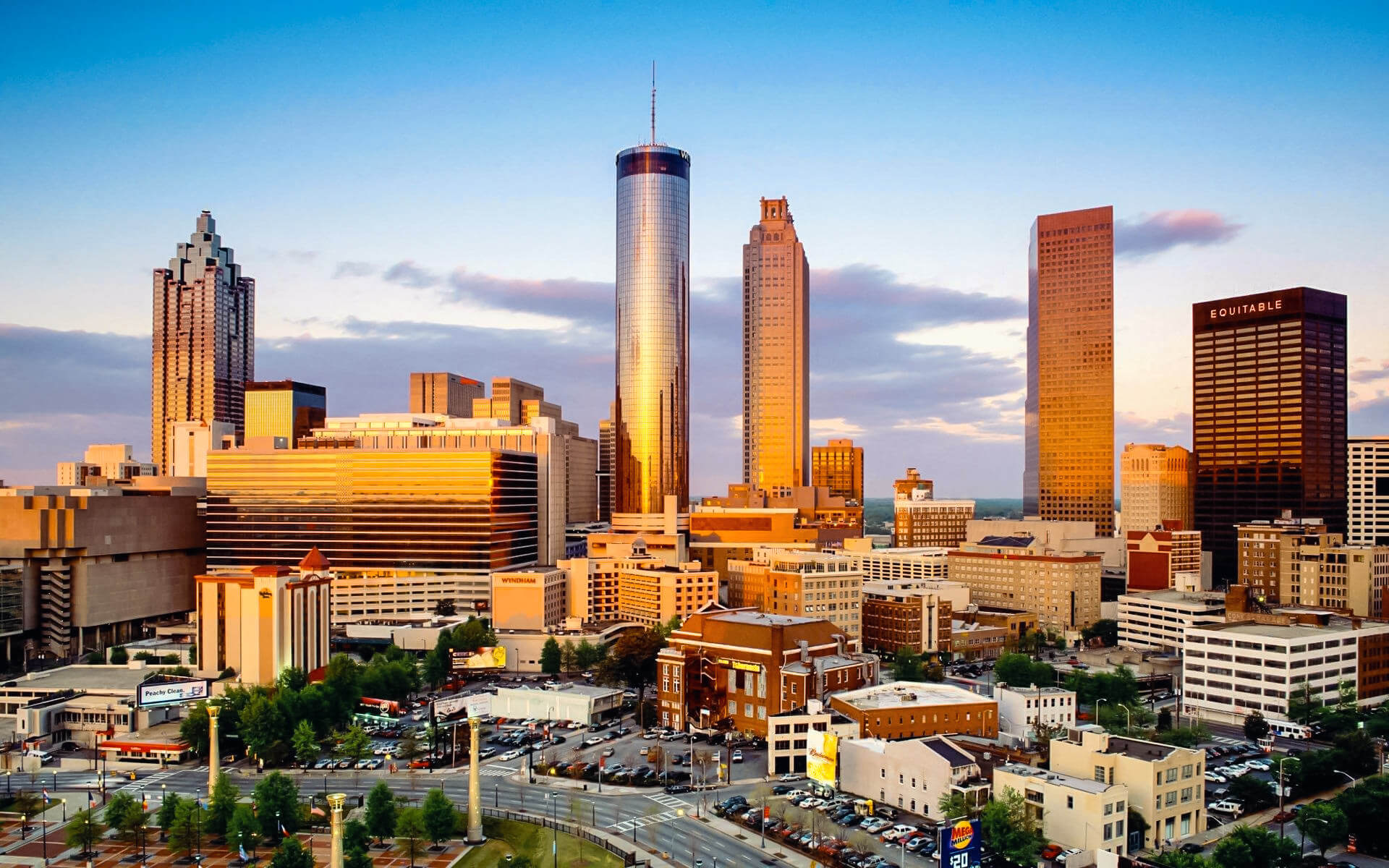 Atlanta was founded in 1837 at the crossroads of two railroad lines, and it emerged from the ashes of the American Civil War to become a national commercial hub. Atlanta achieved worldwide notoriety in the decades after the Civil Rights Movement, when the city gained the moniker “too busy to hate” for the progressive ideas of its inhabitants and officials. Atlanta serves as the principal transportation hub for the Southeastern United States, connecting the region through roadway, train, and air, with Hartsfield–Jackson Atlanta International Airport serving as the world’s busiest airport since 1998.

Atlanta is a “global city” or a “alpha-city,” having a substantial effect on trade, finance, research, technology, education, media, art, and entertainment. With a gross domestic output of $270 billion, it ranks 36th in the world and 8th in the United States. Atlanta’s economy is considered broad, with logistics, professional and business services, media activities, and information technology serving as significant industries. Atlanta’s topography is characterized by undulating hills and extensive tree cover. The revitalization of Atlanta’s neighborhoods, sparked originally by the 1996 Summer Olympics, has accelerated in the twenty-first century, transforming the city’s demographics, politics, and culture.

Atlanta is the forerunner of the New South, retaining the Old South’s beauty and grace. It is a city that successfully combines southern traditions with svelte modernity. Atlanta had a population of 420,000 inside city boundaries and 5.3 million throughout the metro region as of the 2010 Census. Atlanta has an abundance of peach trees and sweet tea, but it also has three distinct skylines and the world’s busiest airport. Atlanta has been destroyed by fire and rebuilt; it has seen the horrors of war and endured the misery of droughts and floods. Atlanta, though, is possibly more adept at rebirth and durability than any other metropolis. Atlanta hosted the 1996 Centennial Olympic Games, gave birth to the civil rights movement’s greatest figure (Martin Luther King Jr.), is the state of Georgia’s adored capital, and has established itself as the lasting leader of the American South.

Atlanta’s best attractions include an eclectic blend that is certain to appeal to everyone and provide enough diversity to keep even the most adventurous tourist occupied. The most exhibits are concentrated in the Centennial Park Area, where three of Atlanta’s most popular attractions are situated within two blocks of one another: The World of Coca-Cola tells the story of the world’s most iconic brand, with plenty of samples to ensure comprehension; across the street is the Georgia Aquarium, the world’s largest aquarium by volume of water, where you can swim with the world’s largest fish, the whale shark; and across the street is the CNN Center and Studio Tour, which provides a behind-the-scenes look at what it takes to run one of the country’s leading news organizations.

For those more interested in history, the Martin Luther King, Jr. National Historic Site in Sweet Auburn has the inspirational leader’s birthplace, last resting place, the church where he once spoke, as well as a museum and monument devoted to his gigantic accomplishments. Civil War enthusiasts may appreciate the 100-year-old Atlanta Cyclorama in adjacent Grant Park, which depicts the Battle of Atlanta in a gigantic, continuous circle painting. The Atlanta History Center in Buckhead has the nation’s biggest collection of Civil War relics, as well as a sizable display commemorating the 1996 Centennial Olympic Games.

Atlanta is located on the Piedmont Plateau, about 700–1100 feet (220–330 meters) above sea level. Thus, the city is somewhat cooler than other parts of the southern United States, which undoubtedly aided the city’s expansion prior to the arrival of air conditioning.

Atlanta is subjected to a broad variety of temperatures. Winter temperatures are generally temperate to warm, although cold fronts may bring minor snow accumulations and lows sometimes reach the teens. However, days are often in the low to mid-fifties (10°C) and nights in the low to mid-thirties (0°C). Although ice storms are very unusual, they are not unheard of. Summers are steamy and humid, with temperatures regularly exceeding 90°F (32°C), garnering the city the moniker “Hotlanta.” Late winter and early spring get the most precipitation, while summer sees frequent afternoon thunderstorms. The finest seasons to visit are spring and fall. During hurricane season (June to November), the area is often impacted by remnants of hurricanes that flow out from the Gulf, bringing heavy rainfall and sometimes strong gusts.

Atlanta has a land area of 134.0 square miles (347.1 km2) and a water area of 0.85 square miles (2.2 km2). Atlanta is located in the Appalachian foothills, and at 1,050 feet (320 meters) above mean sea level, it is the highest metropolitan metropolis east of the Mississippi River. Atlanta is located on the Eastern Continental Divide, which means that precipitation falling on the divide’s south and east sides flows into the Atlantic Ocean, while rainwater falling on the divide’s north and west sides flows into the Gulf of Mexico. Atlanta is located on a hill south of the Chattahoochee River, which is located within the ACF River Basin. The river’s natural ecosystem is maintained in part by the Chattahoochee River National Recreation Area, which is located on the city’s extreme northern outskirts.

With a $304 billion economy, the Atlanta metropolitan area is the eighth biggest in the US and the seventeenth largest in the globe. Corporate activities account up a significant sector of Atlanta’s economy, with several businesses establishing regional, national, or worldwide headquarters in the city. Atlanta is home to the country’s third highest concentration of Fortune 500 firms, including The Coca-Cola Company, The Home Depot, Delta Air Lines, AT&T Mobility, Chick-fil-A, UPS, and Newell-Rubbermaid. Over 75% of Fortune 1000 businesses have operations in the Atlanta metropolitan area, and around 1,250 international organizations have offices in the region. Numerous firms are attracted to Atlanta due to the city’s educated workforce; over 43% of individuals in the city of Atlanta have a college degree, compared to 27% nationally.

Atlanta was founded as a railroad town, and logistics continues to be a significant part of the city’s economy to this day. Atlanta is a significant rail junction and is home to Norfolk Southern and CSX’s large classification yards. Since its inception in the 1950s, Hartsfield-Jackson International Airport has Atlanta International Airport has been a critical engine of the city’s economic development. Delta Air Lines, the city’s biggest employer and the third largest in the metro region, runs the world’s largest airline hub at Hartsfield-Jackson, contributing to the airport’s status as the world’s busiest in terms of passenger traffic and aircraft operations. Atlanta has developed into a center for diplomatic missions, in part owing to the airport; as of 2012, the city has 25 general consulates, the seventh-highest concentration of diplomatic missions in the United States.

Atlanta’s economy is likewise heavily reliant on the media. The city is a significant hub for cable television programming. Ted Turner built the Cable News Network (CNN) and Turner Broadcasting System (TBS) headquarters in Atlanta. The city is home to Cox Enterprises, the country’s third-largest cable television provider and publisher of more than a dozen major American newspapers. The Weather Channel is located in Cobb County, Georgia, and is owned by NBCUniversal, Bain Capital, and The Blackstone Group.

Atlanta’s economy has been disproportionately damaged by the 2008 financial crisis and ensuing recession, garnering a rating of 68th out of 100 American cities in a September 2014 survey due to a high unemployment rate, dropping real income levels, and a depressed property market. Between 2010 and 2011, Atlanta had a 0.9 percent decline in employment and a 0.4 percent increase in income. Though unemployment had decreased to 7% by late 2014, it remained higher than the national average of 5.8%. Atlanta’s housing market has suffered as well, with house values plummeting by 2.1 percent in January 2012 to depths not seen since 1996. In February 2012, the average house price in Atlanta plummeted 17.3 percent year over year, the greatest yearly decline in the index’s history for any city. Home values have plummeted, prompting some experts to declare Atlanta to be the worst housing market in the nation. Nonetheless, Atlanta was included on Forbes magazine’s list of the Best Places for Business and Careers in August 2013.