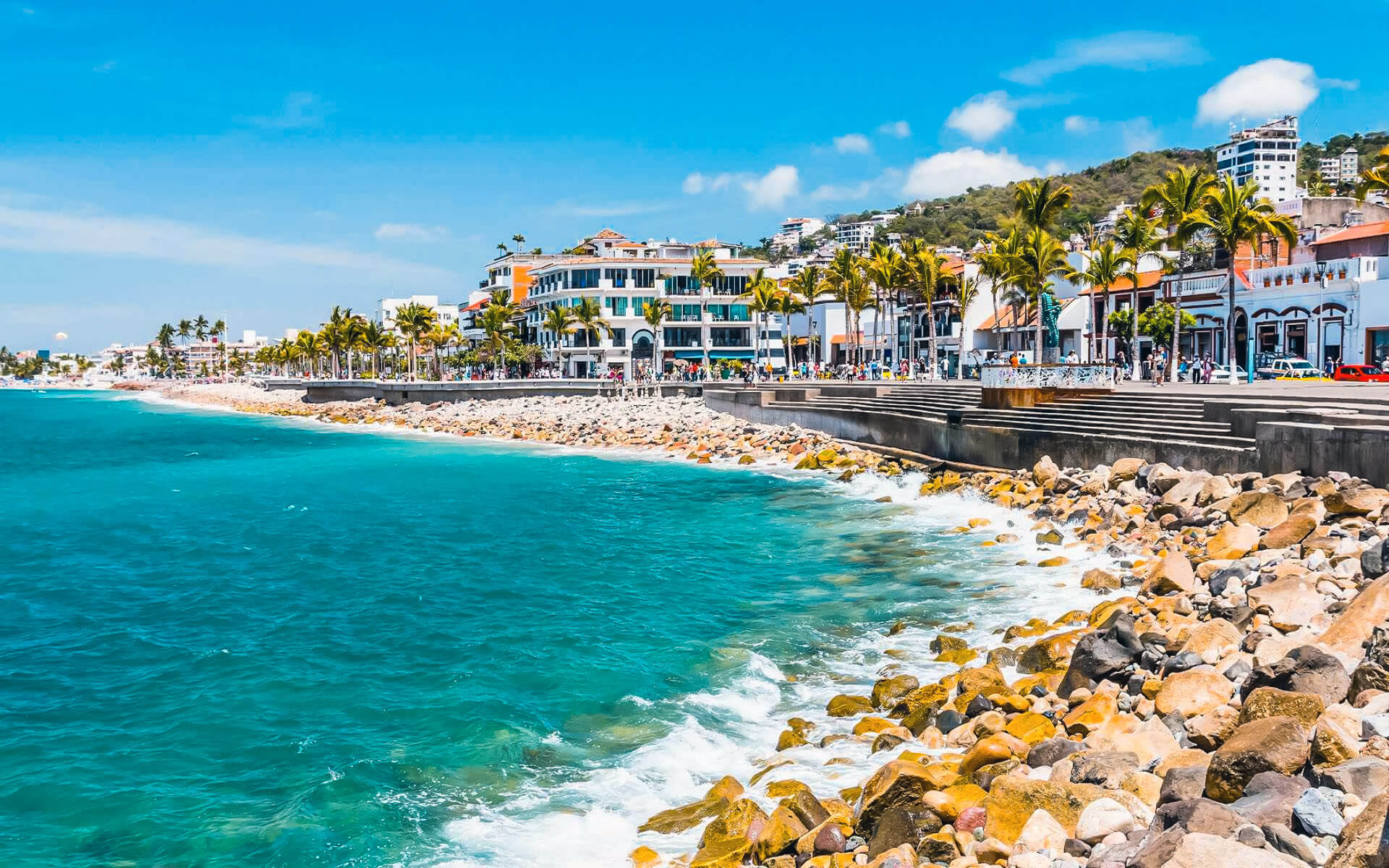 Puerto Vallarta is a Mexican beach resort city located on the Bahia de Banderas on the Pacific Ocean. Puerto Vallarta’s population was 255,725 according to the 2010 census, making it the fifth-biggest city in the state of Jalisco and the state’s second-largest urban agglomeration after the Guadalajara Metropolitan Area. The City of Puerto Vallarta serves as the administrative headquarters of the Municipality of Puerto Vallarta, which encompasses the municipal as well as population areas located beyond the city limits and stretching from Boca de Tomatlán to the Nayarit border (the Ameca River). The city is situated at 20°40′N 105°16′W (20°40′N 105°16′W). The municipality has a 502.19-square-mile area (1,300.7 km2). To the north, it shares a border with the state of Nayarit’s southwest region. To the east, it is bounded by Mascota and San Sebastián del Oeste; to the south, it is bounded by Talpa de Allende and Cabo Corriente.

Puerto Vallarta is a city and renowned tourist destination on Mexico’s Pacific Coast.

Around the Bay, stunning beaches, verdant rainforests, and cascading waterfalls provide several adventure options, while five-star resorts, world-class shopping, and gourmet restaurants delight even the most discerning guest. Stretching from Old Town’s south end to central downtown, the Malecon, a recently enlarged and restored promenade along the coast, passes through a variety of stores, restaurants, and hotels and is often visited by mimes, breakdancers, clowns, and painters.

Puerto Vallarta people are quite courteous and typically prepared to assist with directions and other needs. South of the River Cuale, Old Village Vallarta (or the Zona Romantica zone) seems more like a Mexican town than a tourist trap.

English is widely spoken, yet destination costs are higher than in many other parts of Mexico for tourists. Puerto Vallarta is quite congested during the holidays; if your vacation to Mexico falls on a major holiday, consider visiting Mexico City or Guadalajara instead. Cities are deserted as Mexicans and tourists go to the beaches.

Puerto Vallarta was once known as La ciudad más amigable del mundo (The World’s Most Friendly City), as the sign proclaims upon arriving from Nayarit. Today, the city’s environment is more analogous to tourist-heavy destinations like Cancun and Acapulco due to the presence of countless sidewalk salesmen selling timeshares and tequila, although the city’s image has remained mostly unaffected.

Tourism has grown rapidly in Puerto Vallarta over the years and now accounts for 50% of the city’s economic activities. Puerto Vallarta’s prime season for foreign visitors runs from late November through March (or later depending on the timing of the college Spring Break period in the USA.) The city is particularly popular among people of the western United States due to the city’s proximity to Los Angeles, San Francisco, Seattle, Denver, and Phoenix. Additionally, the city attracts visitors from western Canada, since it offers a number of direct scheduled and charter flights from western Canadian cities.

Puerto Vallarta is also a very popular tourism destination for domestic visitors. It is a favorite weekend getaway for Guadalajara locals (tapatos), as well as a popular national vacation destination during Semana Santa (the week before Easter) and Christmas. Additionally, Acapulco has seen an increase in drug-related violence in recent years, and as a result, Puerto Vallarta has absorbed a large portion of the Mexico City resort holiday industry (Acapulco has long been a common destination for tourists from Mexico City).

Puerto Vallarta has grown in popularity as a retirement resort for seniors from the United States and Canada. This tendency has resulted in a condominium boom in the city.

Puerto Vallarta’s tremendous development in visitor traffic has resulted in quick growth in hotel and rental unit building. This expansion has extended beyond the municipal borders into neighboring state of Nayarit’s Nuevo Vallarta. The region is one of the most rapidly expanding in the Americas.

Guadalajara and Acapulco were popular holiday destinations in the 1980s and 1990s for gay men and lesbians from Mexico City and, more specifically, the United States and Canada. However, Puerto Vallarta has evolved into Mexico’s top vacation town in the years afterwards, serving as a kind of satellite gay space for its larger sister Guadalajara, much what Fire Island is to New York City and Palm Springs is to Los Angeles. It is currently termed the “San Francisco of Mexico” as the most hospitable and gay-friendly resort in the country. Initially quite conservative, the municipal government has become increasingly supportive in recognizing and accepting the LGBT tourism segment and in supporting LGBT events such as the Vallarta gay pride celebrations, which began in 2013 and are now held annually on the weekend preceding Memorial Day in the United States. It has a thriving gay culture concentrated on the city’s south-side Zona Romántica, which includes hotels and resorts, as well as several bars, nightclubs, and a gay beach on the main coast. Puerto Vallarta has been dubbed Latin America’s top gay beach resort, with local authorities estimating a 5% rise in visitors in 2013.

Puerto Vallarta is situated on a small coastal plain at the base of the Sierras Cuale and San Sebastián, both of which are part of the Sierra Madre Occidental. To the north, the plain spreads, reaching its maximum width around the Ameca river. Three rivers originate in the Sierra and travel across the region. The Cuale, the Pitillal, and the Ameca are the rivers that go south to north. Additionally, a number of arroyos connect the Sierra to the coastal plain. Many of these rivers’ and arroyos’ valleys are populated. Additionally, construction has extended up the slopes from the coastal plain.

The city proper is divided into four distinct areas: the hotel zone to the north, Olas Altas – Col Zapata to the south of the Cuale river (recently dubbed Zona Romantica in some tourist brochures), the Centro to the west of the hotel zone, and a number of residential areas to the east of the hotel zone. The town’s oldest portion is located in the Col. Centro neighborhood near the chapel of Our Lady of Guadalupe, particularly on Hidalgo street.

Puerto Vallarta, like most of North America’s west coast, is prone to earthquakes, albeit Puerto Vallarta is often spared the direct consequences of earthquakes located farther south. In 1995, an earthquake off the coast of Colima rocked the Roman Catholic Church’s crown.

Almost half of the workforce is engaged in tourism-related enterprises, which include hotels, restaurants, personal services, and transportation. However, the municipality’s agricultural, industrial, and commercial sectors remain robust.