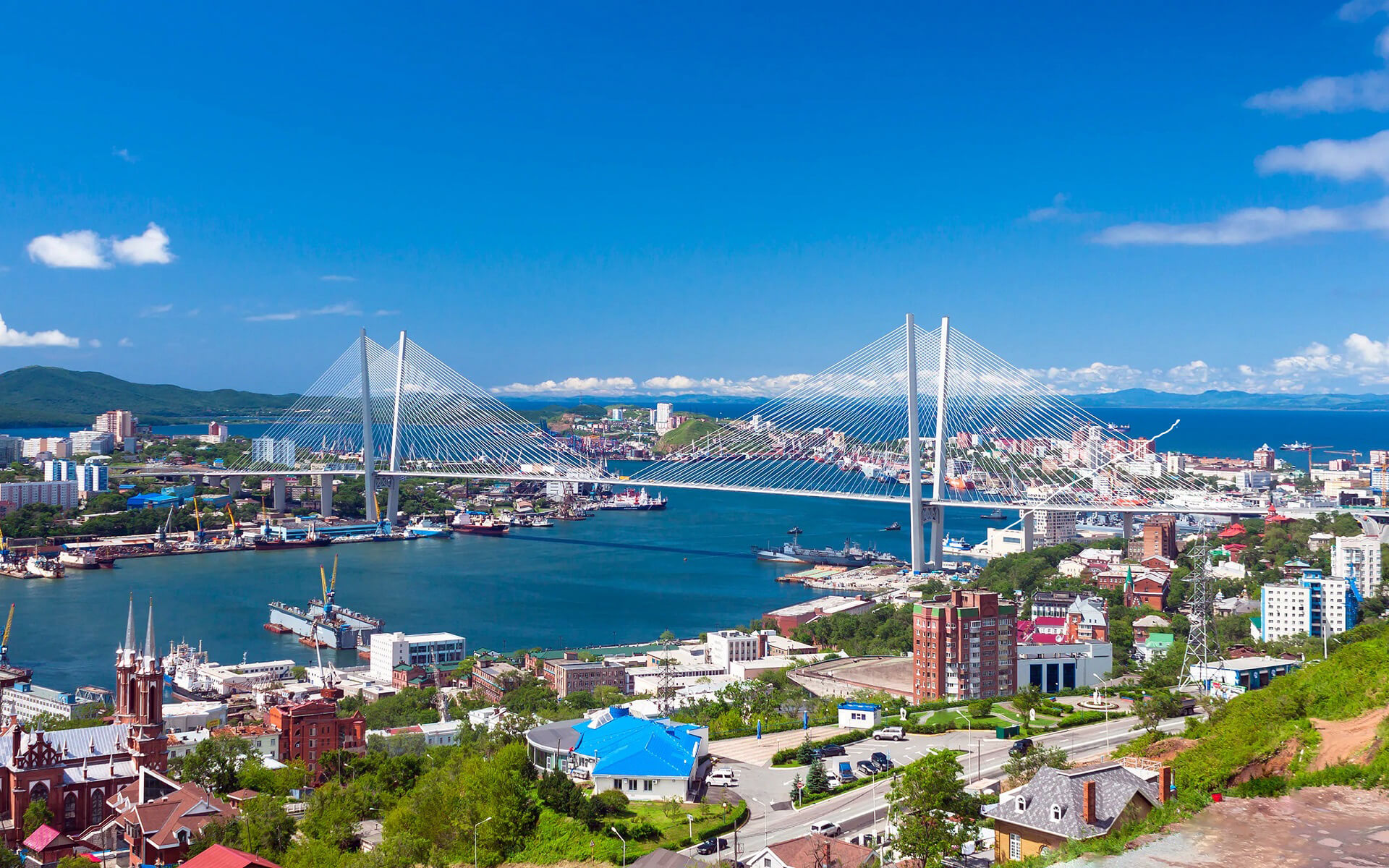 Vladivostok is a Russian city and the administrative headquarters of Primorsky Krai, situated at the tip of the Golden Horn Bay, close to Russia’s borders with China and North Korea. In 2016, the city had a population of 606,653.

Vladivostok is the Russian Pacific Fleet’s home port, surrounded by the Amursky Gulf to the west, the Ussuriysky Gulf to the east, and Golden Horn Bay to the south. The Eastern Bosphorous strait separates the city from its southernmost half, Russkiy Island; there are two smaller, lightly inhabited islands, Reineke and Popov. From its inception as a military base in 1860, the city was granted porto-franco status, which fostered international trade and prosperity.

Vladivostok is a Russian city. It is the Trans-Siberian Railway’s eastern end. Some visitors come here at the conclusion or beginning of their Trans-Siberian journey. However, it has enough attractions and atmosphere to keep you entertained for a few of days.

During the Soviet period (from 1958 to 1992), Vladivostok was closed to visitors and was only recently reopened to tourists. The city center, on the water’s edge, features broad boulevards lined with beautiful, century-old buildings; majestic, deteriorating, and in desperate need of a scrub. Further out, on the steep hills overlooking the bay, similarly deteriorating Soviet blocks interspersed with modern high-rise structures house the majority of the city’s inhabitants.

Beautiful oak trees surround the city, which, together with Nakhodka, might serve as a starting point for weekend bus journeys to winter ski slopes or summer water falls. When the lotus flowers bloom in August, a few lotus lakes attract campers and forest lodgers.

Vladivostok has a humid continental climate influenced by the monsoon (Köppen climatic classification Dwb), with warm, humid, and rainy summers and cold, dry winters. Winters are significantly colder than a latitude of 43 degrees north should suggest given its low height and coastal position, with a January average of 12.3 °C (9.9 °F) due to the effect of the Siberian High. Because the marine impact is significant in the summer, the yearly climate is rather cool considering the location. On the other end, Vladivostok’s annual mean temperature of roughly 5 °C (41 °F) is around ten degrees cooler than places on the French Riviera on a comparable coastal latitude in Europe. Winters, in particular, are roughly twenty degrees cooler than on the most temperate coasts this far north.

Temperatures in winter may fall below 20 °C (4 °F), but moderate bursts of weather can increase daytime temperatures above freezing. From December through March, the average precipitation, mostly in the form of snow, is roughly 18.5 millimeters (0.73 in). Individual snowfalls are low over the winter, with a maximum snow depth of about 5 centimeters (2.0 in) in January. Clear, bright days are prevalent in the winter.

Summers are hot, humid, and wet as a result of the East Asian monsoon. August is the hottest month, with an average temperature of +19.8 °C (67.6 °F). The majority of the precipitation in Vladivostok falls during the summer months, with several days getting precipitation. Cloudy days are generally frequent, and when there is rain, humidity is high, reaching up to 90% in July and August.

The city is situated at the southernmost tip of the Muravyov-Amursky Peninsula, which is about 30 kilometers (19 miles) long and 12 kilometers (7.5 miles) broad.

Mount Kholodilnik, at 257 meters, is the highest peak (843 ft). Eagle’s Nest Hill is often referred to be the city’s highest point; however, with a height of just 199 meters (653 ft), or 214 meters (702 ft) according to some sources, it is merely the highest point in the downtown area, not the whole city.

The import of Japanese vehicles is a key employment and source of money for the city’s residents. In addition to salespeople, the sector employs repairmen, fitters, import clerks, and shipping and railway businesses. The dealers in Vladivostok sell 250,000 automobiles every year, with 200,000 traveling to other areas of Russia. Every third worker in the Primorsky Krai is involved in the vehicle import sector in some way. The Russian government has made efforts in recent years to boost the country’s auto sector. This has included hiking duties on imported automobiles, which has hampered the car import sector in Vladivostok. To make amends, Prime Minister Vladimir Putin ordered that one of Sollers’ factories be relocated from Moscow to Vladivostok. The relocation was completed in 2009, and the plant currently employs around 700 locals. In 2010, it is expected to build 13,200 automobiles in Vladivostok.

The main post office is across Aleutskaya from the railway station. The first level of the post office has Internet connectivity. In the town center, there are a few Internet cafés.

ATMs are widely available, and the majority are linked to worldwide banking networks. Aside from that, many hotels feature exchange offices, albeit some have exchange rates that are clearly slanted in their favor. Banks are the most apparent currency exchange option. There will also be unscrupulous money changers at Sportivnyaya Harbor.