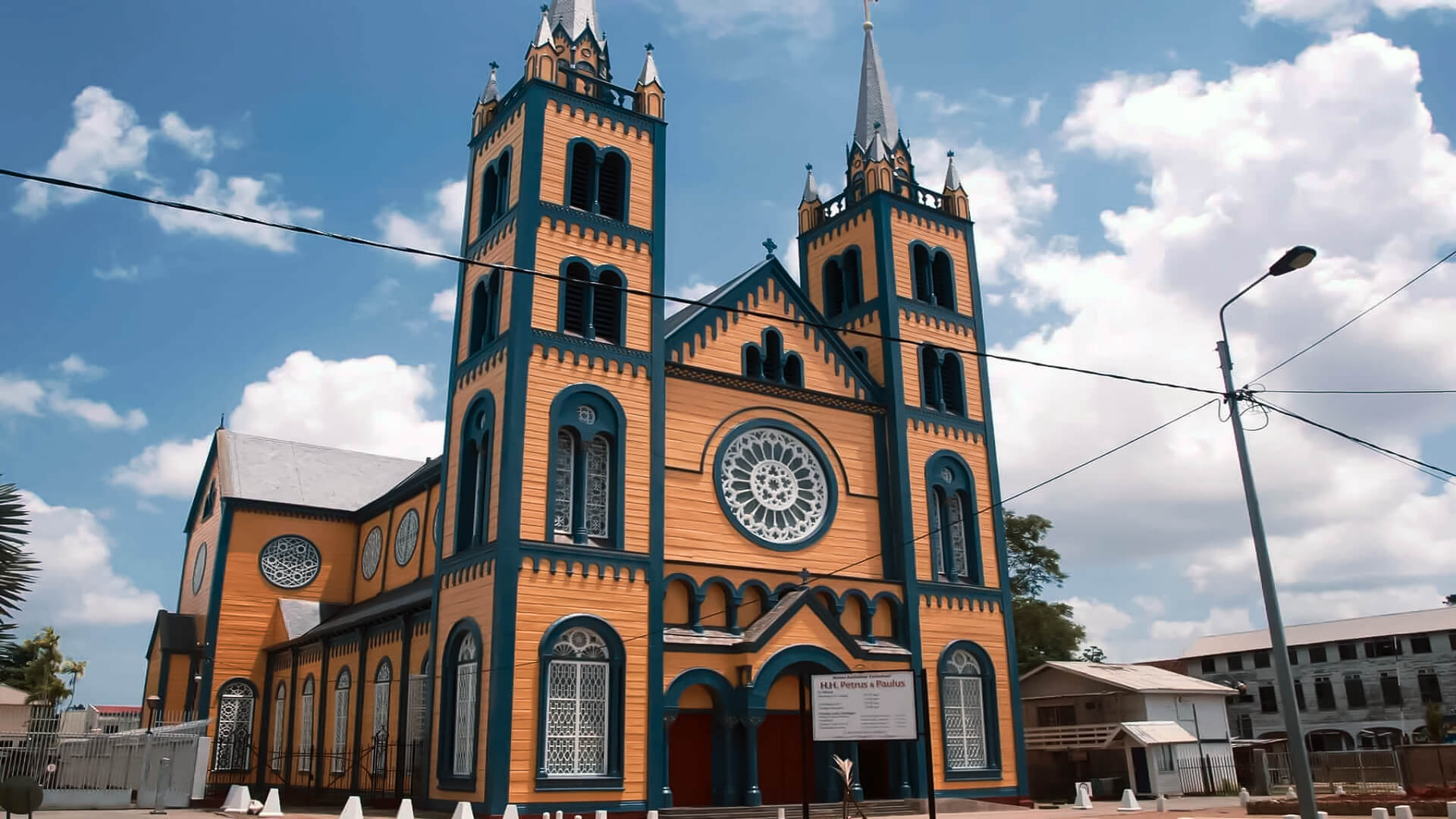 Suriname, formally the Republic of Suriname, is a sovereign state located on South America’s northeastern Atlantic coast. It is bounded on the east by French Guiana, on the west by Guyana, and on the south by Brazil. It is the smallest nation in South America, with little under 165,000 km2 (64,000 sq mi). Suriname has a population of about 566,000 people, the most of whom reside on the country’s north coast, in and around Paramaribo, the capital and biggest city.

Suriname was long inhabited by a variety of indigenous civilizations before falling under Dutch control in the late 17th century. The nation became a component country of the Kingdom of the Netherlands in 1954. Suriname gained independence from the Kingdom of the Netherlands on 25 November 1975, while retaining strong economic, diplomatic, and cultural connections to its former colonizer. Its indigenous peoples have been more vocal in demanding land rights and advocating for the preservation of their native lands and ecosystems.

Suriname is a culturally Caribbean nation and a Caribbean Community member (CARICOM). While Dutch is the official language of government, business, the media, and education, Sranan is a commonly used lingua franca based on English. Suriname is the only country outside of Europe where the majority of the people speaks Dutch. Suriname’s population is one of the most varied in the world, including a wide range of ethnic, religious, and linguistic groupings.

Suriname is South America’s smallest sovereign nation. It is mainly located on the Guiana Shield, between latitudes 1° and 6°N and longitudes 54° and 58°W. The nation is split into two geographical areas. The northern, lowland coastal region (approximately above the Albina-Paranam-Wageningen line) has been farmed, and it is home to the majority of the inhabitants. The southern portion of Suriname is made up of tropical rainforest and sparsely populated savanna near the border with Brazil, accounting for about 80% of the country’s land area.

Suriname has an extremely hot and rainy tropical climate, and temperatures do not change greatly throughout the year. It is located 2 to 5 degrees north of the equator. The average relative humidity is between 80% and 90%. The average temperature fluctuates between 29 and 34 degrees Celsius (84 to 93 degrees Fahrenheit). Because to the high humidity, actual temperatures might feel up to 6 degrees Celsius (11 degrees Fahrenheit) hotter than the reported temperature. The year is divided into two wet seasons: April to August and November to February. It also has two dry seasons, which last from August to November and from February to April.

Suriname has a population of 541,638 people according to the 2012 census. Surinamese society is distinguished by its high degree of variety, with no one ethnic group constituting a majority. This is the result of centuries of Dutch dominance, which resulted in repeated periods of forced, coerced, or voluntary migration by different nations and ethnic groups from all over the globe.

East Indians are the most numerous ethnic group, accounting for 27 percent of the population. They are the descendants of 19th-century Indian contract laborers, mostly from the contemporary Indian states of Bihar and Eastern Uttar Pradesh, which border Nepal. Surinamese Maroons, whose ancestors were mainly fugitive slaves who fled to the interior, are the second biggest group at 21.7 percent; they are split into five major groups: Ndyuka (Aucans), Kwinti, Matawai, Saramaccans, and Paramaccans. Surinamese Creoles, a hybrid race descended from African slaves and mainly Dutch Europeans, account for 15.7% of the population. Javanese make approximately 14% of the population and, like East Indians, are mainly descended from laborers hired from the former Dutch East Indies’ island of Java (modern Indonesia). 13.4% of the population is of mixed ethnic origin.

Other significant groups include the Chinese, who numbered over 40,000 as of 2011 and were descended from 19th-century contract workers and some recent migration; Levantines, primarily Maronites from Lebanon and Jews of Sephardic and Ashkenazi origin, whose center of population was the community of Jodensavanne; and Brazilians, many of whom were laborers mining for gold.

A tiny but important group of Europeans remain in the nation, accounting for approximately 1% of the population. They are mostly descended from Dutch 19th-century immigrant farmers known as “Boeroes” (derived from boer, the Dutch term for “farmer”) and, to a lesser extent, from other European communities such as Portuguese from Madeira. After South Africa gained independence in 1975, the majority of Boeroes fled.

The Akurio, Arawak, Kalina (Caribs), Tiriyó, and Wayana are the major indigenous tribes, accounting for 3.7 percent of the population. They are mostly concentrated in the districts of Paramaribo, Wanica, Marowijne, and Sipaliwini.

Suriname’s capital, Paramaribo, and the coast are home to the overwhelming majority of the country’s population (about 90 percent).

In the years running up to Suriname’s independence in 1975, people were given the option of becoming Surinamese or Dutch citizens, which resulted in a huge exodus to the Netherlands. This movement persisted in the early aftermath of independence, throughout military administration in the 1980s, and for mostly economic reasons lasted into the 1990s. As of 2013, the Surinamese community in the Netherlands totaled 350,300, compared to about 566,000 Surinamese in Suriname.

Suriname’s religious composition, like its ethnic makeup, is diverse and reflects the country’s multiculturalism. According to the 2012 census, almost half of the population (48.4 percent) was Christian, 21.6 percent were Roman Catholic, 11.18 percent were Pentecostal, 11.6 percent were Moravian, and the rest were of various other Protestant faiths.

Hindus were the second-largest religious group in Suriname, accounting for 22.3 percent of the population, the third-highest percentage of any Western Hemisphere nation behind Guyana and Trinidad & Tobago. The Indo-Surinamese people is home to almost all Hindu adherents. Muslims make up 13.9 percent of the population, the highest percentage in the Americas, and are mainly of Javanese and, to a lesser extent, Indian ancestry.

Other religious groupings include Winti, an Afro-American religion followed mostly by Maroons; Javanism, a syncretic faith embraced by certain Javanese Surinamese; and numerous indigenous folk traditions that are often absorbed into one of the major faiths (usually Christianity). A bit more than 10% of the population is irreligious or has not declared a faith.

Suriname’s democracy became stronger following the tumultuous 1990s, and the country’s economy became more diverse and less reliant on Dutch financial aid. Mining for bauxite (aluminium ore) remains a significant source of income, and the discovery and exploitation of oil and gold has significantly increased Suriname’s economic independence. Agriculture, particularly rice and bananas, continues to be a significant component of the economy, while ecotourism is creating new economic possibilities. Suriname’s pristine rain forest covers more than 80% of its land area; with the creation of the Central Suriname Nature Reserve in 1998, Suriname signaled its commitment to the protection of this valuable resource. The Central Suriname Nature Reserve was designated a UNESCO World Heritage Site in 2000.

Suriname’s economy is driven by the bauxite sector, which accounts for more than 15% of GDP and 70% of export profits. Rice, bananas, and shrimp are other important exports. Suriname has just lately begun to utilize some of its substantial oil and gold deposits. A quarter of the population is employed in agriculture. Suriname’s economy is heavily reliant on trade, with the Netherlands, the United States, Canada, and Caribbean nations, namely Trinidad and Tobago and the islands of the former Netherlands Antilles, serving as major trading partners.

After taking office in the autumn of 1996, the Wijdenbosch administration terminated the previous government’s structural adjustment program, saying it was unjust to the poorest segments of society. As existing taxes expired and the government failed to adopt new tax options, tax revenues dropped. The distribution of fresh Dutch development money had been stopped at the end of 1997, as Surinamese The Dutch government’s ties with the United States have worsened. In 1998, economic growth slowed due to declines in the mining, building, and utilities industries. Excessive government spending, inadequate tax collection, a bloated civil service, and decreased foreign assistance all led to the budget imbalance, which was projected to be 11 percent of GDP in 1999. The government attempted to offset the deficit via monetary expansion, which resulted in a significant rise in inflation. Suriname takes longer than almost any other nation in the world on average to register a new company (694 days or about 99 weeks).