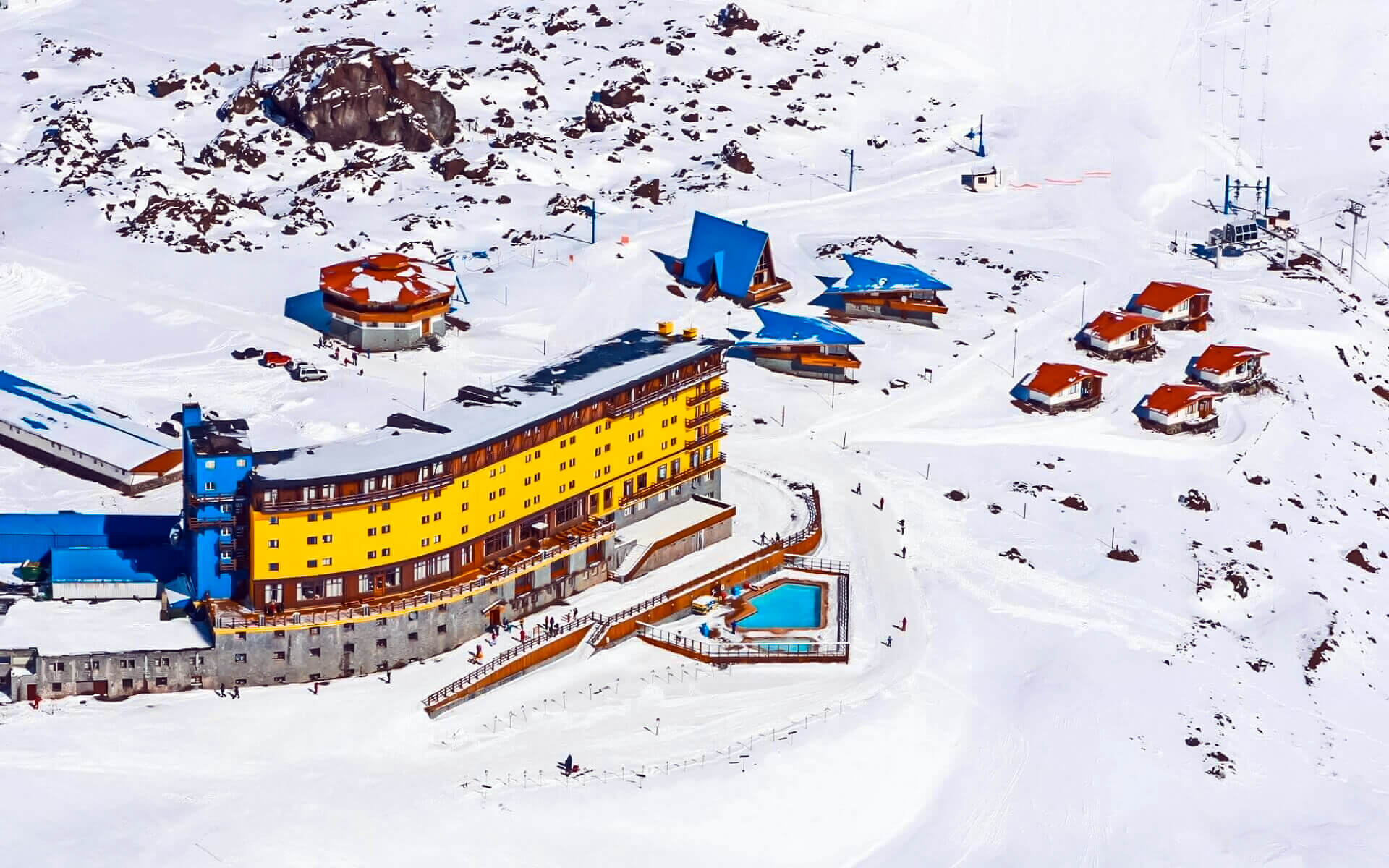 Portillo is a South American ski resort situated in Chile’s Andes highlands. It is located in the Valparaso Region, near the city of Los Andes, and 160 kilometers (100 miles) by car from Santiago. Portillo is the oldest and most well-known ski resort in South America. Portillo is located on the rim of Inca Lake and is adored by advanced/expert skiers for its steep, off-piste terrain, excellent climbing, and snow that may persist for days. With just one hotel and no town, the atmosphere encourages skier friendship, and the emphasis is equally on skiing and snowboarding as it is on living off the slopes.

In 1966, Portillo, Chile became the first South American resort to hold the World Skiing Championships. The ski resort’s reputation expanded further in 1978, when the 200km/h speed barrier was broken at Portillo, and the ski resort remains famous among skilled skiers who frequent Portillo for the very steep slopes.

For 60 years, Portillo has provided a one-of-a-kind experience to ski and snowboard lovers. Portillo is a tourist attraction for all ages, thanks to its remarkable skiable terrain, natural beauty, and plenty of services and apres ski activities. It has ski slopes for all abilities, 14 lifts, trained instructors dedicated to assisting tourists in enjoying skiing and snowboarding, and a welcoming atmosphere. To make the trip even more enjoyable, tourists in Portillo should avoid waiting in line for the elevators.

With a maximum capacity of 450 passengers and around 480 employees, the service is customized, pleasant, and kind.

Portillo is devoid of towns and villages. Portillo’s ski resort amenities are mostly contained inside the hotel, and given the hotel’s social environment, the experience has been compared to that of a cruise liner. The dining area serves communal meals, and other amenities include a bar, nightclub, gym, cinema, and the hotel’s famed outdoor pool and jacuzzis. There are about as many staff members as clients, which results in a very personalized and attentive service, notably in the dining area.

Portillo is a particularly family-friendly resort, including daycare and a children’s ski school (which offers group instruction in English), as well as a variety of recreational programs for children.

At over 10,000 feet, Portillo offers the ideal ski in/ski out accommodation. There are just 450 beds available in three different types of Portillo lodging. This comprises dorm beds at the Inca Backpackers Lodge, shared rooms at the Octagon Lodge, and hotel rooms at the Hotel Portillo. Generally, accommodations are booked on a Saturday-to-Saturday basis and include four meals per day and lift tickets. Here are some further details on the Portillo ski packages (Portillo ski weeks).

While a few day travelers remain in Los Andes, the majority of guests take advantage of the entire Ski Portillo experience.

Portillo ski resort receives an average yearly snowfall of 7.4 metres (about 25 feet). Snow storms are often brief and powerful, followed by bluebird days that allow for full appreciation of the breathtaking panoramas. Due to the location and height, the snow is sometimes dry, but the riding is spectacular. At other times, Portillo’s snow quality is poor, and several runs are either closed or very sloppy.

The Ski School offers a separate children’s program. Kid’s Camp is a weekly program for children aged three to six years old that introduces them to skiing and encourages them to enjoy their time on the snow. Lessons for children have been conveniently scheduled to coincide with parent involvement in their own Ski School group. Complimentary childcare is offered for children up to the age of six, and for a modest fee, private nighttime babysitting is available.

Throughout the season, there are Free Kids’ Weeks during which any parent may bring one of their children aged 12 or younger for free (this includes room, skiing and meals). A timetable of activities for young children and teenagers is created by an entertainment staff for the hours after skiing, both in the afternoons and nights.

Portillo is a safe place for children since all activities and entertainment are confined inside a single enormous hotel complex. The massive Games Room has pool tables, ping pong tables, and electronic games, a high school-style gymnasium with planned soccer, basketball, and volleyball tournaments, a heated outdoor pool, a theater, and a variety of other activities.

Children should not miss the Sol de Portillo Guest Race, which takes place on a Thursday and concludes with a prize giving ceremony in the hotel’s Living Room.

Portillo’s main dining room occupies the whole second level and accommodates around 500 people. It is steeped in history and retains an aura of respectable formality, with nice yet casual attire being the norm. Men are no longer obliged to wear dinner jackets, although decent casual attire is suggested for meals. Due to South America’s more formal culture than North America, baseball hats and T-shirts worn in the Dining Room may be insulting to many of the other visitors from Argentina, Chile, Peru, or Brazil. The nicest tables are located near the enormous picture windows that overlook the Inca Lake. Make sure to sample the tap water; it is among the finest in South America. Chileans enjoy an exceptional range of seafood, from delectable salmon and sea bass to king crab, shrimp, and scallops, owing to Chile’s tremendously vast coastline. Cooks cook a variety of shellfish, including locos (abalone), the world’s only edible barnacle, machas (similar to razor clams), mussels, and “shoe-sized” mussels, using a range of recipes, the most prevalent of which are soups, both hot and cold. Another source of pride for Chileans is their wine, and Portillo’s menu has over 50 varieties. Four meals are offered daily, with supper served late according to Chilean tradition. Guests used to dining early are encouraged to consume something during the tea hour and then dine later. On the first level, the self-service café serves Inca Lodge guests, day visitors, and ski personnel. The self-service menu offers homestyle fare four times a day. Tio Bob’s (Uncle Bob’s) is Garganta’s slopeside eatery. The views are breathtaking, and the restaurant is seldom packed at noon due to hotel guests dining in the Dining Room. The cuisine has grilled meats, an enticing salad bar, and fresh fruit, all washed down with Chilean wine. Tio Bob’s is also a favorite nighttime private party destination, complete with a starlit chairlift ride that adds an amazing depth to the event. La Posada, a tiny tavern located just across the highway from the hotel, is where Portillo’s crew congregates and is said to be the place to go for a “down n’ dirty dance fiesta.” The gatherings are most lively in La Posada in mid-September, when Chileans celebrate their independence with chicha, a handmade wine, and the cueca dance, which the males practice between themselves or with any girl brave enough to join them. Pisco Sours is a delectable Chilean wine created from moscatel grapes that everyone should experience during their visit in Portillo.

Portillo is intended for easy socializing and enjoyment, with a variety of entertainment, activities, and amenities to keep tourists occupied after a day on the slopes. The focus is firmly on relaxation and well-being, with regular aerobics and yoga courses. The fitness center has a weight room and an outdoor heated pool. A sauna and massage are fantastic ways to unwind fatigued muscles, and a beauty salon is the ideal setting for total self indulgence. The Living Room’s plush vintage sofas make it an ideal spot for reading, playing chess, or just relaxing by the fire. The theater boasts a wide variety of films, The Bar has live music and bands every night, the sun deck serves as a social hub, and there is a cyber café with nine computers where you can view your photographs, visit the web, or send a few e-mails. Airmail takes between 5 and 7 days to deliver letters and postcards to North America and Europe. The swimming pool is a must-see in the afternoon, while the Games Room draws fans of pool, ping pong, and computer games. The entertainment crew organizes and leads afternoon children’s games. The monthly torchlight procession is followed by supper, live music in the bar, and a Goodbye Disco Party, which is sometimes themed, so bring a colorful costume.

Portillo is a snowboarder’s paradise, with 100% of the terrain above the tree line. Each year, an increasing number of bikers arrive in Portillo. Surfers from Peru and Brazil, members of the Extreme Team, and visitors from the United States all contribute to Portillo’s reputation as a location to test your limits amid an unusual collection of riders. Heli-skiing trips may be organized upon request. The novice area is conveniently located near the hotel, and Canarios seems to be a popular choice for most beginners, while cruisers and intermediates favor Juncalillo for its undulating slopes across valleys. The bottom segment, Los Tuneles, runs via two lengthy tunnels that the government was forced to construct above the road due to the ski run’s proximity! The pistes are groomed nightly, while the more severe terrain retains its natural snowfall. To ski or snowboard Portillo, it is advisable to begin on the Juncalillo side in the morning. From a bed at the Inca Lodge, you can watch the dawn as the light down the east-facing hill, finally reaching the Roca Jack, the first run to soften in the early morning sun. Garganta, located just north of the Plateau chairlift, is another suggested difficult line; it begins in a small steep slope and then expands out into a huge bowl. Every Thursday, there are generally some nice moguls on Plateau, as well as free timed courses and Guest races, with the award presentation taking place later that evening in the Hotel’s Living Room.