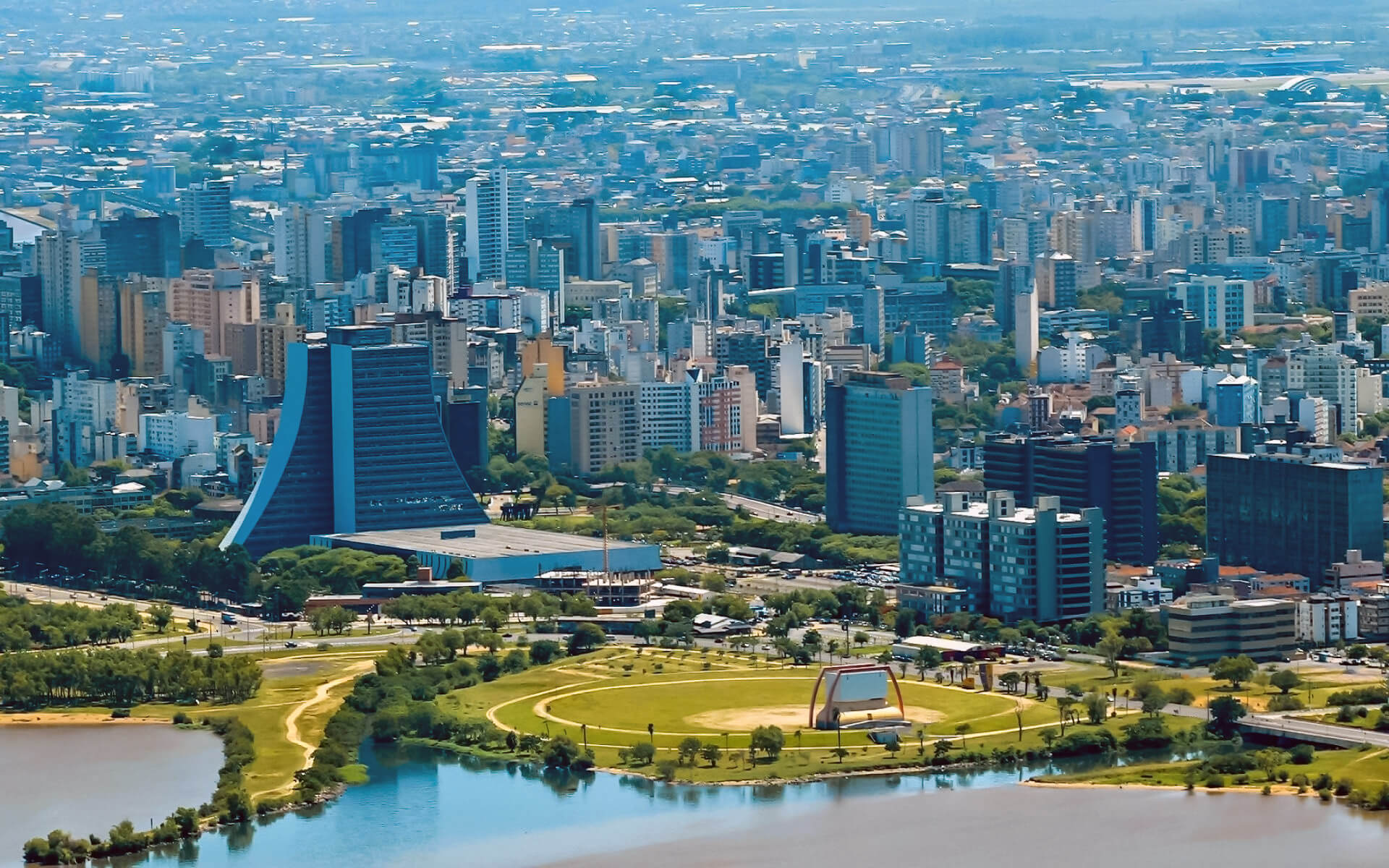 Porto Alegre is the state capital and biggest city of Rio Grande do Sul in Brazil. Founded in 1769 by Manuel Seplveda, it is the tenth most populous city in the nation, with 1,509,939 residents (2010), and the center of Brazil’s fourth biggest metropolitan area, with 4,405,760 inhabitants (2010). The city is Brazil’s southernmost capital city.

Porto Alegre was established in 1769 by Manuel Jorge Gomes de Seplveda, who used the alias José Marcelino de Figueiredo to conceal his identity; however, the official date is 1772, when the act was signed by Portuguese immigrants from the Azores. The great bulk of the people is descended from Europeans.

The settlement is located on the eastern bank of the Guaba River (also known as a lake), where five rivers meet to create the Lagoa dos Patos (Lagoon of the Ducks), a massive freshwater lagoon navigable by even the biggest ships. This five-river intersection has developed into a significant alluvial port as well as the country’s primary industrial and economic hub.

Porto Alegre hosted the World Social Forum in recent years, an effort of numerous non-governmental groups. The city gained notoriety as the first to use participatory budgeting. In 2006, the World Council of Churches convened its ninth assembly in Porto Alegre. Porto Alegre has also hosted one of the world’s biggest free software conferences, FISL, since 2000.

The neighborhood is home to attractions such as the Piratini Palace, which serves as the state government’s seat of government, the Porto Alegre Botanical Garden, the Moinhos de Vento Park, the Public Market, and Farroupilha Park.

In Brazil, Porto Alegre is well-known for its eclectic nightlife. The city’s clubs, pubs, bars, and restaurants cater to a variety of tastes and budgets, ranging from inexpensive, typical beer-and-bite at a corner bar to all-night raves and nightclubs. A block of pubs, restaurants, and clubs is located in Porto Alegre’s “SoHo” neighborhood.

Numerous bars, some with live music, are located across and next to the Parque Farroupilha and near the Federal University. The various Centros do Tradiço Gacha in Porto Alegre host traditional meals, music, and dance events throughout the year.

Because Porto Alegre is situated in the subtropical zone, it has a humid subtropical climate (Köppen climate classification Cfa). Precipitation is abundant and consistent throughout the year. Summer temperatures often exceed 32 °C (90 °F), and the season is quite uncomfortable due to excessive humidity. A subtropical climatic zone is defined by summers that are hot and humid and winters that are moderate. Precipitation occurs in significant volumes throughout the year in the majority of places. Summer rainfall is mostly caused by thunderstorms and the rare tropical cyclone.

The city has the most seasonal variation and temperature extremes of any Brazilian capital. The highest latitude is one explanation for this, as is the presence of 14 hours of daylight in December and 10 hours in June. Occasionally, the population is dangerously exposed to exceptionally high levels of UV radiation.

Winter is warm, windy, wet, and highly variable, all of which are characteristics of this time of year. Winter temperatures typically vary between 10 °C (50 °F) to 19 °C (66 °F). On the coldest days of the year, the temperature may go slightly below zero, as it did in 2012, when it reached 3 degrees Celsius (27 degrees Fahrenheit) (according to AccuWeather; unofficial). Snow is very infrequent and is often mistaken with sleet.

Porto Alegre is situated in southeastern Brazil near the northern end of the vast coastal lagoon, Lagoa dos Patos. The settlement is located on the east bank of the Rio Guaiba, whose estuary produces the massive freshwater lagoon known as Lagoa dos Patos. Additionally, it serves as the state capital of Rio Grande do Sul, Brazil’s southernmost state.

Porto Alegre has a lengthy beachfront along the Guaba Lake and a landscape marked by 40 hills. In the lake, a wide body of water, a labyrinth of islands facing the city forms an archipelago with a unique environment that provides habitat for an abundance of animals. The metropolitan area has 28% of Rio Grande do Sul’s natural vegetation, with 9,288 species. Among them are several trees that are remnants of the Atlantic Forest. Fauna is very diverse, particularly on islands and in the highlands. The Portoalegrense surrounds are densely forested, with several parks, squares, and woodland lanes.

Located at the confluence of five rivers, it has developed into a significant alluvial port as well as one of Brazil’s primary industrial and economic hubs. Porto Alegre exports products from the fertile agricultural and pastoral hinterland, including soybeans, leather, canned beef, and rice, to destinations as far afield as Africa and Japan.

According to SENAES (National Office of Solidarity Economy), a solidarity economy is defined as an ensemble of economic activities characterized by collaboration, self-management, economic viability, and solidarity. The office recognized 14,954 solidary firms in Brazil in 2005, including 85 in Porto Alegre.

Gerdau, Petroleo Ipiranga, Zaffari, and RBS are just a few of the major businesses in Porto Alegre. General Motors (GM) has been operating in Gravata, in the Metropolitan Region, since 2000. There is also a Petrochemical Pool in this Region, but in Triunfo, and Dell Computers has constructed a facility in Eldorado do Sul. In the health sector, three hospitals are regarded to be among the greatest in Latin America: Hospital Moinhos de Vento, a private, JCAH-accredited facility; Santa Casa de Misericordia Hospital; and Clinicas Hospital, a public facility. The latter are university-affiliated referral hospitals serving the Brazilian southeastern region. Commerce is a significant economic activity, with several shopping complexes (like Praia de Belas Shopping, Shopping Iguatemi and the smaller though posh Shopping Moinhos). The Porto Alegre Metropolitan Region is centered on shoe manufacturing (near Novo Hamburgo) and petrochemical sectors, as well as services.

The Electronics Technology Center (CEITEC) in the city, which is focused on the research and manufacture of application-specific integrated circuits (ASICs), announced the establishment of Latin America’s first integrated circuit design center today. To develop cutting-edge semiconductor products for high-volume markets in Latin America and beyond. CEITEC S.A. will propel Latin America’s electronics sector forward by capitalizing on Brazil’s regional influence, leadership, and economic power. The business plans to hire 60 engineers to build RFID, digital media, and wireless communication chips for its manufacturing plant, which is now ramping up for production. The Brazilian government has invested around US$210 million in total. The business is pursuing a fab-lite approach, with the goal of manufacturing analog/digital chips at its Porto Alegre plant. The company’s in-house design center, which employs over 100 engineers.

The rural hinterland produces a diverse range of agricultural and pastoral goods, including beef and skins, wool, rice, beans, cashews, avocados, wheat, grapes, and tobacco. Lumber is harvested from forests. The city’s industries are mostly focused on processing these items, including meat packing, lard refining, leather tanning, shipbuilding, and the manufacture of textiles, metallurgical goods, electrical and communications equipment, plastics, medicines, perfume, beer, and chemicals. Additionally, there are steel mills, an oil port, and a petrochemical complex located here. Electricity is generated by a coal mine in adjacent So Jerônimo and a hydroelectric facility in Salto. The city is home to several corporate and financial enterprises, as well as an educational institution.