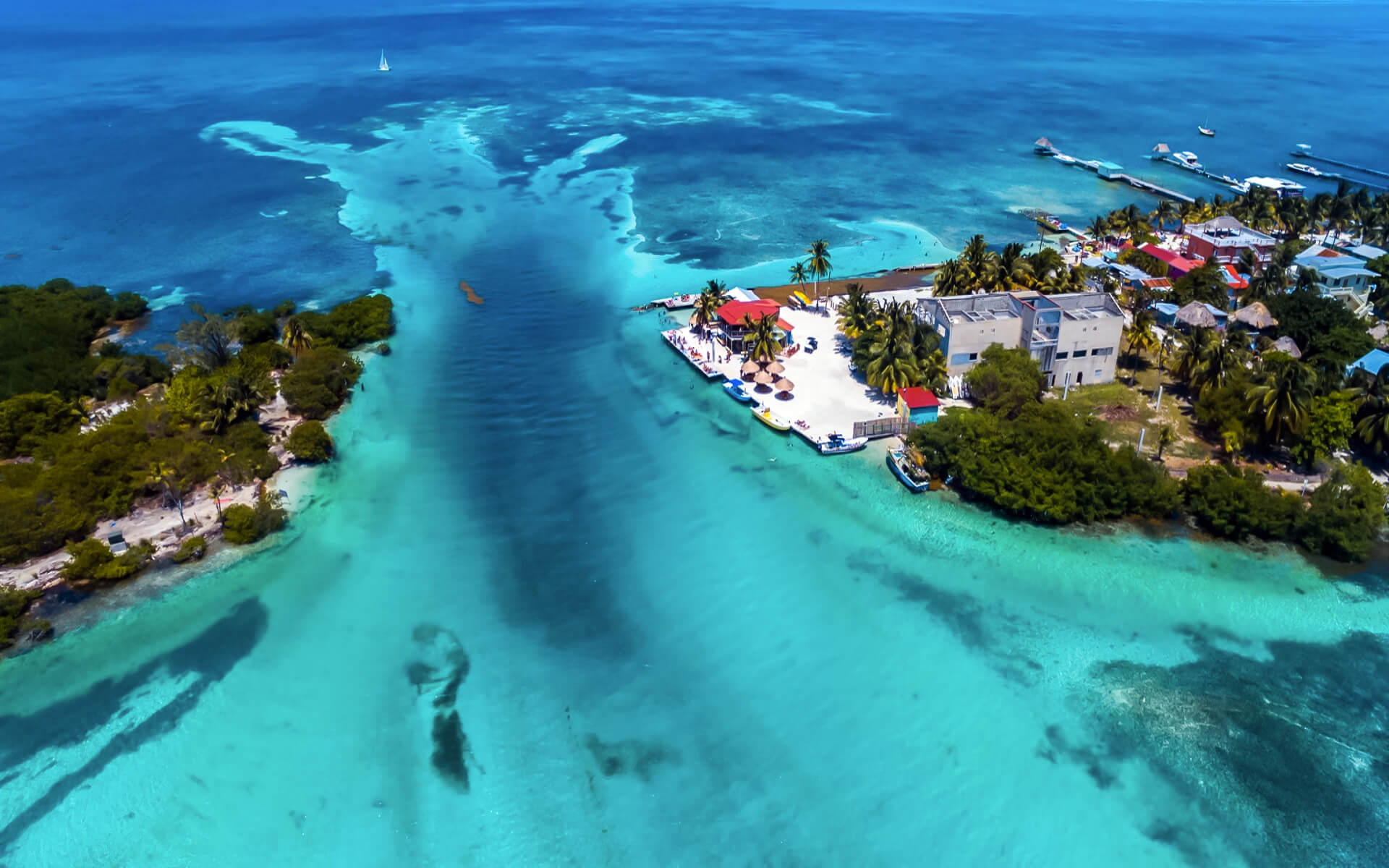 Caye Caulker is a tiny limestone coralisland in the Caribbean Sea off the coast of Belize, extending roughly 5 miles (8.0 km) north to south and less than 1 mile (1.6 km) east to west (east to west). Caye Caulker Village is the name of the island’s settlement.

Caye Caulker is about 20 miles (32 kilometers) north-northeast of Belize City and may be reached by high-speed water taxi or small aircraft. In recent years, the island has grown in popularity among backpackers and other travelers. There are around 30 modest hotels as well as a few restaurants and stores.

Caye Caulker is a favorite destination for backpackers and budget travelers because to its (relatively) low costs, laid-back atmosphere, and variety of restaurants and bars. There aren’t really any beaches to speak of, but there are plenty of docks scattered around the island where you can pull up a plastic chair and soak up the rays, or hang out at one of the ocean front restaurants, or walk down to “The Split,” a popular swimming area, and if you’re feeling thirsty, The Lazy Lizard Bar is just a couple steps away from the water.

Mestizo, Garifuna, and Creole cultural influences may be found throughout the area.

The island is just a sand bar on top of a limestone shelf. Below the Caye, in the limestone, lies an underwater cave known as Giant Cave. A small lagoon between 6 inches (150 mm) to 14 feet (4.3 m) deep meets the Belize Barrier Reef to the east of the settlement. The reef in front of the settlement is known as a dry reef, with the reef visible at the surface, but the coral farther north is known as a deep reef, with the reef lying beneath 2 to 8 feet (0.61 to 2.44 m) of water. Windsurfers frequent this location.

The Split, a tiny canal, splits the island in two. Some claim that the Split was formed by Hurricane Hattie, which ravaged Belize City in 1961, however this is a hoax. Villagers who hand dug it maintain that it is mostly man-made. Ramon Reyes, the Village Council Chairman at the time, recalls that he and others dug the stream by hand after Hurricane Hattie uncovered a few inches deep entrance. This created a navigable waterway between the island’s west and east edges, initially meant for dugout boats. The increasing flow of tidal water has naturally excavated the entrance to a depth of 20 feet (6.1 m), allowing bigger vessels to pass through. The natural erosion continues to this day, threatening the waterway’s delicate sand banks.

Prior to tourism, the island’s major business was fishing. The island is located in the center of natural fish migratory pathways and feeding areas for conch and lobster. During WWII, fisherman on the island salvaged wreckage from torpedoed ships in the Caribbean that washed ashore. Rubber bales were the most profitable. The fishing business is estimated to sustain around 80 households on the island.

The island’s tourist industry is expanding.

Tourism began on the island circa 1964, with just a few weekend tourists from the mainland Belleview Hotel, hauled out by a local boat named ‘Sailfish,’ constructed by a schoolteacher next to the then Teachers House. The first visitors were largely Belizeans working for the government. Dr. Hildebrand of the University of Corpus Christi began coming each winter with a Marine Biology Expedition of around 24 students in 1969. Backpackers arrived to the island at the same time, but only by fishing sailboat, and there was no lodging. The tourist sector was pioneered by the Alamina, Reyes, and Marin families, and the first scuba diving instruction and tours began in the late 1960s.

Tourists grew increasingly frequent as speedboats became available in the 1970s. Hippies passing through the island on their way to Isla Mujeres, Tulum, Caye Caulker, Tikal, and Lake Atitlan in Guatemala were on the so-called “Gringo Trail” (many of them making use of the easily available marijuana). Word of mouth spread the reputation.

Today, the village’s diverse economy includes lobster, fish, and tourism. Internet e-commerce is increasing slowly. Recent storms had a significant impact on lobster fishery as well as the flora. The island’s environment is gradually reverting to pre-storm conditions. The island is quickly becoming a mecca for artists and musicians. There are a few up and coming lyrical artists on the island, such Alexander Joseph, commonly known as “Bobbo youngster,” and ILYA Rosado, a.k.a. “ILLA-G,” who have created a local islander fan following with their rap and reggae style music.

Caye Caulker Airport’s tiny aircraft and asphalt-paved airstrip may look insignificant to tourists used to jet airliners and huge concrete runways, but the barrier island system supports a vibrant network of air transportation with a variety of journey times. There is a regular water taxi service offering transportation to and from the island for customers who prefer a route more typically used by residents. Taxis are accessible at the main Belize City airport. The speedboats utilized can transport up to 50 persons. The boat normally has two or three powerful engines and travels in 45–50 minutes.

Walking is the primary form of transportation on the island. The trails are nicely marked, and traversing the island takes no more than 20 minutes. Bicycles and golf carts are also widely available and may be leased. Visitors who are prone to sunburn should exercise care since the island is completely made of white coral sand, and reflected sunlight may induce minor sunburns even in the shade. The island is also a popular launch point for scuba diving trips to the Great Blue Hole, with several expeditions each week.

The island’s name was spelt “Cay Corker” on early British maps. La Aguada was traditionally known for its abundant supply of exposed fresh water, and one idea maintains that this island was a favorite stop for seafarers to replace and cork water bottles. Cayo Hicaco, which means “the island of the cocoplum,” is the island’s Spanish name. Caye Caulker might be an anglicized version of Cayo Hicaco. Another explanation is that vessels were caulked in the sheltered cove of La Ensenada on the island’s western side, thus the name “Caulker.”

Caye Caulker’s recent history started with the arrival of Mestizo immigrants from the Mexican Caste Wars. With a small population, food may be produced using sustainable agricultural practices. The coconut and fishing industries grew to be key economic drivers on the island. Even today, a few of the older ladies prepare coconut oil for their personal use and to sell, while the coconuts themselves are normally harvested and sent to the mainland.