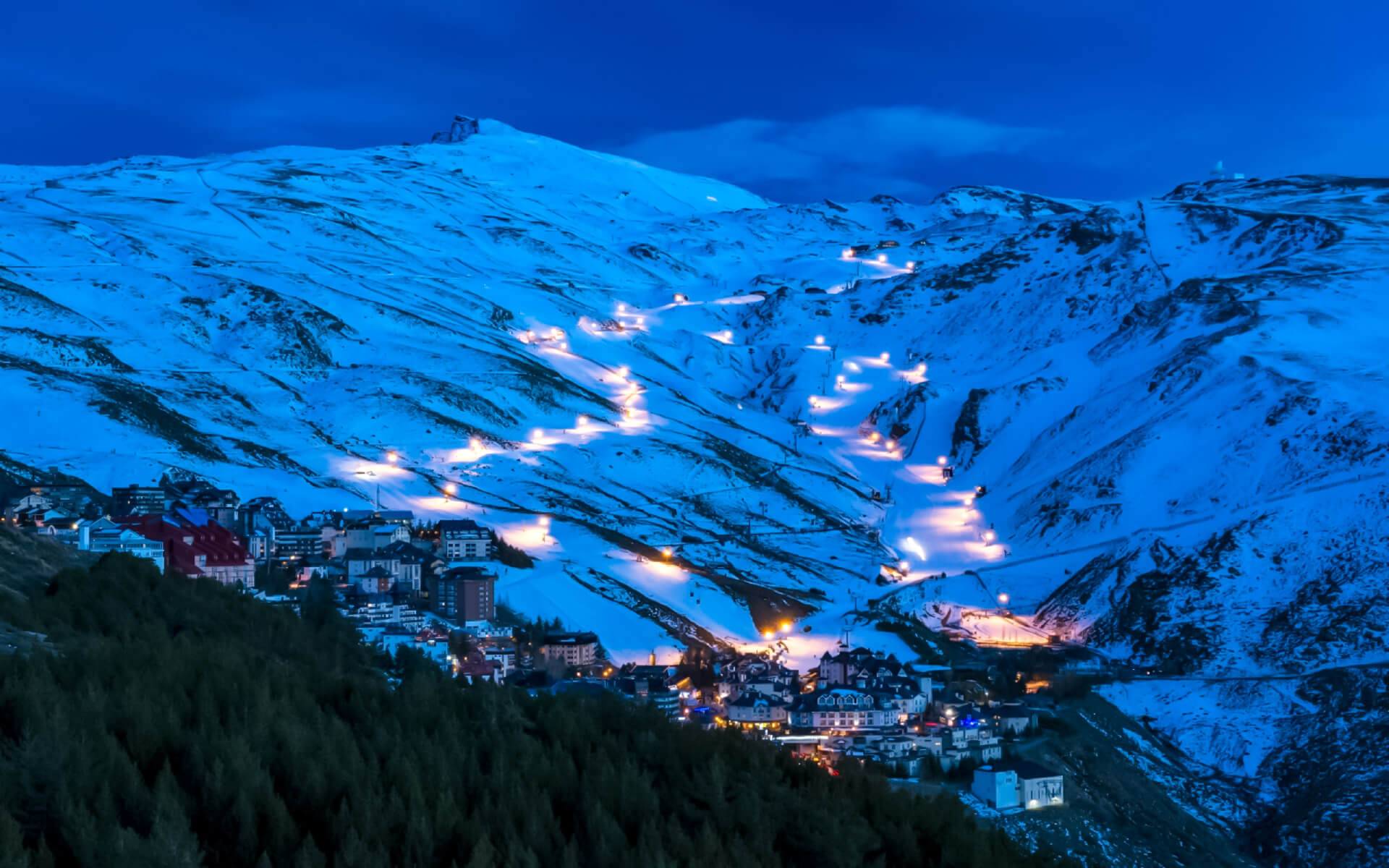 The Sierra Nevada (Spanish for “snowy mountain range”) is a mountain range in Andalucia, Spain, that includes the provinces of Granada, Málaga, and Almeria.

Sierra Nevada is the highest and most snow-sure ski resort in Spain. The ski region boasts the largest concentration of peaks over 3000 meters in the nation, making it ideal for early and late season skiing. The resort’s base is located at 2100 meters, while the summit station is located at 3300 meters. There are around 120 pistes of varied difficulty, totaling 106 kilometres.

It is well-known for its exceptional facilities and fantastic environment, with runs above the forest line and small novice trails. In addition, there are some great off-piste alternatives for specialists.

Sierra Nevada is a famous tourist destination because its high peaks allow skiing at one of Europe’s most southerly ski resorts, in a region recognized for its mild temperatures and ample sunlight. Its slopes are home to the city of Granada, as well as Almeria and Málaga.

The Sierra Nevada National Park encompasses a portion of the range. The area has also been designated as a biosphere reserve. At a height of 2,800 meters, the Sierra Nevada Observatory and the IRAM radiotelescope are situated on the mountain’s northern slopes (9,200 ft).

Veleta, Laguna de las Yeguas, Borreguiles, Loma Dlar, Parador y Ro are the six ski areas in the resort. There are 30 lifts and 103 pistes (2 Gondolas, 15 Chairlifts, 5 Surface Lifts, and 8 Magic Carpets) (16 green, 35 blue, 43 red, 9 black). The total ski area is 94.8 km. The lift has a capacity of 49545 skiers per hour. Mirlo Blanco, a Snow park and Activity Area, is also available in Sierra Nevada. From December through April, the ski season is in effect.

There is a terrific selection of routes accessible around the resort to accommodate all levels of ability, ranging from a beginners’ section to runs that demand extensive expertise. Beginners will be happy with the well-kept greens and blues on offer at Sierra Nevada, although the resort is perhaps best suited for intermediates. The long reds (the longest is 6.5 kilometers long and flows from the peak of Veleta mountain at 3398 meters down to the town at 2,150 meters. There will be various obstacles for advanced skiers, including a men’s downhill world cup run.

In addition, the area has three ski schools, which are ideal for individuals who wish to learn the sport but are unsure where to begin. The Monachii region is advised for those wishing to enhance their present abilities, while professionals can contemplate taking on the Valeta II down to Borreguiles.

The ski season here runs from December to April, and the conditions are spectacular, with well-groomed routes across the area. Remember to pack your suntan lotion, since this is Europe’s sunniest resort. And don’t be concerned about the sun effecting the snow conditions; Sierra Nevada is virtually totally covered by a sophisticated artificial snow-making system.

Sierra Nevada has a Mediterranean to subarctic climate (Dsc) owing to its high elevation and little summer precipitation, according to the Köppen climate classification. With typical temperatures around 10 °C (50 °F) between June and September to avoid subarctic categorization, the climate at a somewhat lower elevation is continental highland climate. At a slightly lower elevation than that classification area, where February means average temperatures above 3 °C (27 °F), it falls into the normal cool-summer Mediterranean classification, transitioning to the hot-summer variety in surrounding lowland areas. As a result, the Sierra Nevada climate is a highland cooled-down version of a conventional Mediterranean climate. Summer and winter daytime temperatures are around 12° C lower than in Granada, with variances considerably higher in spring as the Sierra Nevada takes longer to warm up for the brief summers. In May, daily highs in Sierra Nevada are approximately 4 °C (39 °F), with an average of 24 °C (75 °F) in Granada. The annual temperature of 3.9 °C (39.0 °F) is much lower than that of Granada (15.7 °C (60.3 °F) and coastal Málaga (18.5 °C (65.3 °F).

Apres ski, restaurants and other activities in Sierra Nevada

There’s much to do away from the slopes, including saunas, a gym, snowmobile, sleigh rides, and lots of shopping. Après-ski is vibrant and traditional Spanish, which means partying into the early hours, and there are plenty of pubs and clubs to choose from.

Visitors visiting Sierra Nevada may pick from a variety of wonderful bars, including outstanding club nights such as Crescendo, Vaya, and Chimenea.

Furthermore, guests may enjoy a variety of snowsports, such as creative skiing, hiking, and adventure skiing, with lots of incredible equipment available for rent. Additionally, if you come during the week, you may encounter much fewer people than on weekends.

Granada, at the foot of the Sierra Nevada Mountains, is just a 30-minute drive away. The views extend all the way to the Mediterranean beaches in the south and the plains in the northeast. You may even combine a ski vacation in Sierra Nevada with a beach vacation! The Costa del Sol is two hours’ drive from the resort.