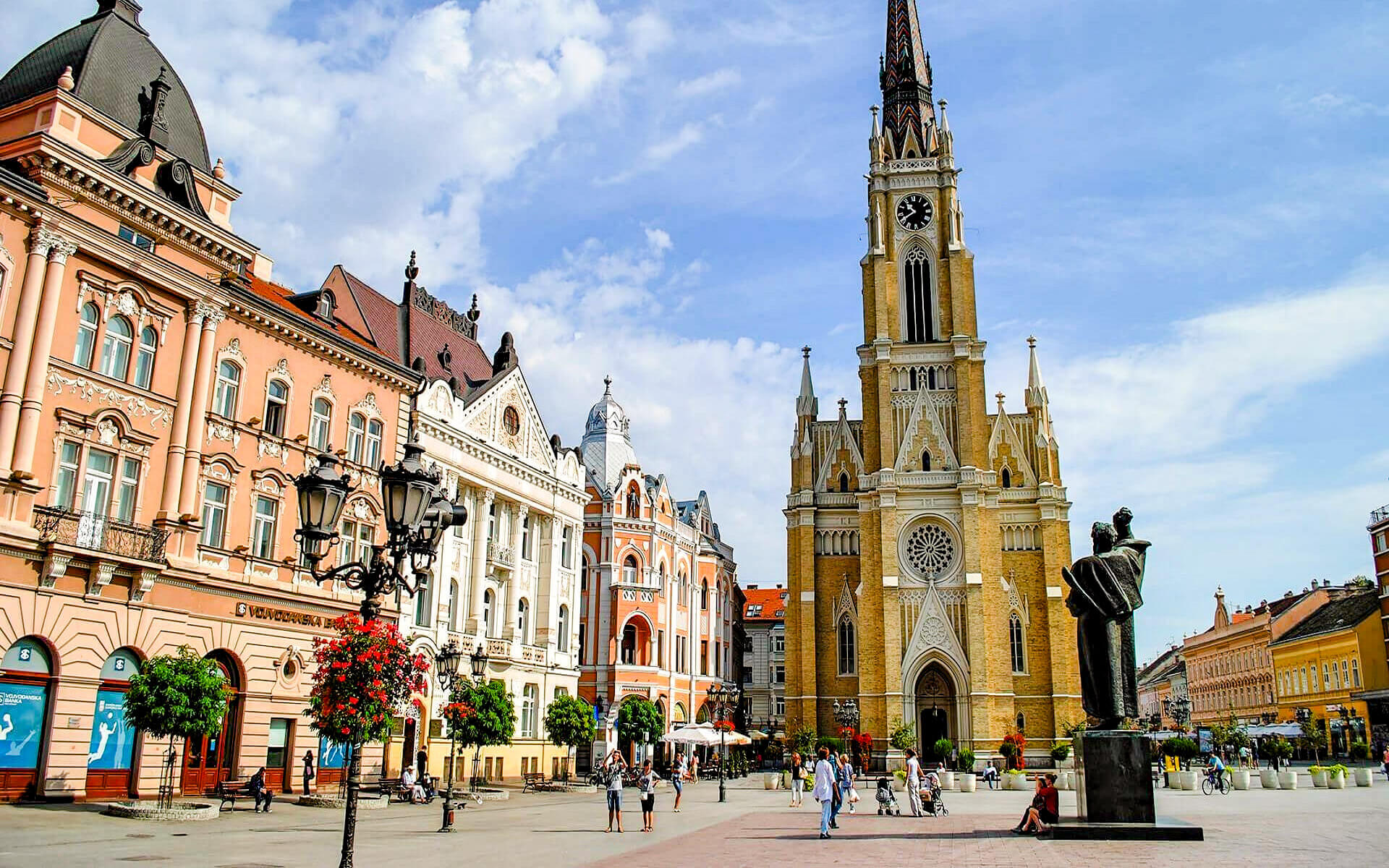 Novi Sad is the capital of the Vojvodina province and the administrative center of the South Bačka District in Serbia. It is situated in the southern portion of the Pannonian Plain, on the boundary of the Bačka and Srem areas, on the Danube river’s banks, facing the northern slopes of Fruška Gora mountain.

Novi Sad was founded in 1694 by Serb merchants who established a colony across the Danube from the Petrovaradin castle, a vital military position for the Habsburgs. It became a prominent commerce and industrial center, as well as a center of Serbian culture throughout the 18th and 19th centuries, giving it the epithet “Serbian Athens.” The city was extensively damaged during the 1848 Revolution, although it was later rebuilt. Novi Sad is now a significant industrial and financial hub in Serbia, as well as a major cultural center.

Since 2000, the number of visitors visiting Novi Sad has gradually increased. Every year in early July, during the annual EXIT music festival, the city is overrun with young people from all over Europe. Over 200,000 people attended the event in 2008, putting Novi Sad on the map of summer festivals both in Europe and abroad. Aside from the EXIT festival, the Novi Sad Fair brings many business people to the city; in May, the city hosts the largest agricultural exhibition in the area, which attracted 600,000 visitors in 2005. There is also a tourist port at Varadin Bridge in the city center that welcomes Danube river cruise vessels from all around Europe.

The Petrovaradin Fortress, which overlooks the city and offers picturesque views of the city, is the most well-known building in Novi Sad. Aside from the fortress, there is also the ancient area of Stari Grad, which has several monuments, museums, caffes, restaurants, and stores. There is also a National Park of Fruška Gora nearby, around 20 kilometers (12 miles) from the city center.

Novi Sad is Serbia’s second cultural center (after Belgrade), and municipal authorities are working to make the city more appealing to a variety of cultural events and music performances. Since 2000, Novi Sad has hosted the EXIT festival, the largest music summer festival in Serbia and the vicinity, as well as Serbia’s sole festival of alternative and contemporary theatre. Other notable cultural events include the Zmaj Children Games, the Days of Brazil – Novi Sad Samba Carnival, the International Novi Sad Literature Festival, Sterijino pozorje, the Novi Sad Jazz Festival, and many more. Apart from the Serbian National Theatre, the most notable theatres include the Youth Theatre, the Cultural Centre of Novi Sad, and the Novi Sad Theatre. The Novi Sad Synagogue also hosts a number of cultural events throughout the city. Offset of the Serbian Academy of Science and Art, Library of Matica Srpska, Novi Sad City Library, and Azbukum are among the city’s other cultural institutions. The city is also home to Vojvodina’s cultural institutions, including the Vojvodina Academy of Sciences and Arts and the Vojvodina Archive, which has numerous records from Vojvodina going back to 1565.

The city contains a number of museums and galleries, both public and private. The most well-known museum in the city is the Museum of Vojvodina, which was created in 1847 by Matica srpska and has a permanent collection of Serbian culture and life in Vojvodina throughout history. The Museum of Novi Sad in Petrovaradin Fortress has a permanent collection of fortress history.

Matica Srpska Gallery is the city’s largest and most prestigious gallery, with two locations in the city center. There is also The Gallery of Fine Arts – Rajko Mamuzić Gift Collection and The Pavle Beljanski Memorial Collection, which has one of the largest collections of Serbian art from the 1900s to the 1970s.

Novi Sad has a four-season temperate continental climate. Autumn lasts longer than spring, with lengthy intervals of sunshine and warmth. Winter is not as harsh, with an average of 22 days of sub-zero temperatures and 25 days of snowfall. The coldest month is January, with an average temperature of 1.9 °C (28.6 °F). Spring is often brief and wet, while summer comes suddenly. The lowest temperature ever recorded in Novi Sad was 30.7 degrees Celsius (23.3 degrees Fahrenheit) on January 24, 1963, while the highest temperature ever recorded was 41.6 degrees Celsius (106.9 degrees Fahrenheit) on July 24, 2007.

The breeze from the east-southeast The area climate is characterized by Košava, which winds from the Carpathians and delivers bright and dry weather. It mainly blows throughout the fall and winter, with intervals of 2–3 days. Košava’s average speed is 25 to 43 kilometres (16 to 27 mi) per hour, however particular strokes may exceed 130 km/h (81 mph). It may produce snowdrifts in the winter when accompanied by snowstorms.

The settlement is located on the Danube’s S-shaped meander, which is just 350 meters wide under the Petrovaradin rock. A stretch of the Danube-Tisa-Danube Canal runs through the city center and joins into the Danube. The city’s major section is located on the Danube’s left bank, in the Bačka region, while minor parts, Petrovaradin and Sremska Kamenica, are located on the right bank, in the Srem (Syrmia) region. The city’s Baka side is located on one of the southernmost low points of the Pannonian Plain, whereas the Fruka Gora side (Syrmia) is a horst mountain. The Danube’s alluvial plains are well-formed, particularly on the left bank, which is 10 kilometers (6 miles) from the river in some places. A substantial portion of Novi Sad is built on a fluvial terrace with elevations ranging from 80 to 83 meters (262 to 272 feet). Except in the Ribnjak area, the northern section of Fruška Gora is made up of huge landslide zones that are not active (between Sremska Kamenica and Petrovaradin Fortress).

Novi Sad is a typical town in Central Europe. Because the city was nearly completely devastated during the 1848/1849 revolution, there are only a few structures from before the 19th century, therefore architecture from the 19th century dominates the city center. Old tiny dwellings used to dominate the cityscape around the center, but they are being replaced by new multi-story skyscrapers.

Novi Sad is the economic center of Vojvodina, Serbia’s most fertile agricultural area. The city is also one of the most important economic and cultural centers in Serbia and the former Yugoslavia.

Novi Sad was always a moderately developed city in Yugoslavia. Its GDP per capita was 172 percent of the Yugoslav average in 1981. In the 1990s, the city (together with the rest of Serbia) was badly impacted by an internationally enforced trade embargo and the Yugoslav dinar’s hyperinflation. The embargo and mismanagement of the economy cause the degradation or collapse of once-powerful industrial conglomerates such as Novkabel (electric cable business), Pobeda (metal industry), Jugoalat (tools), Albus and HINS (chemical industry). The oil refinery, situated northeast of town (together with the thermal power plant), near the community of Šangaj, is almost the only feasible existing big facility.

Novi Sad’s economy has largely recovered from that time, and it has risen rapidly since 2001, moving from an industry-driven to a tertiary-sector-driven economy. Privatization procedures of state and society-owned industries, as well as strong private incentives, boosted the district’s proportion of privately held corporations to more than 95 percent, and small and medium-sized enterprises dominated the city’s economic growth.

The Statistical Office of Serbia issued a list of the most developed municipalities in Serbia at the end of 2005, ranking Novi Sad seventh in terms of national income, after certain Belgrade municipalities and Bečej, with 201.1 percent more than the Serbian average.