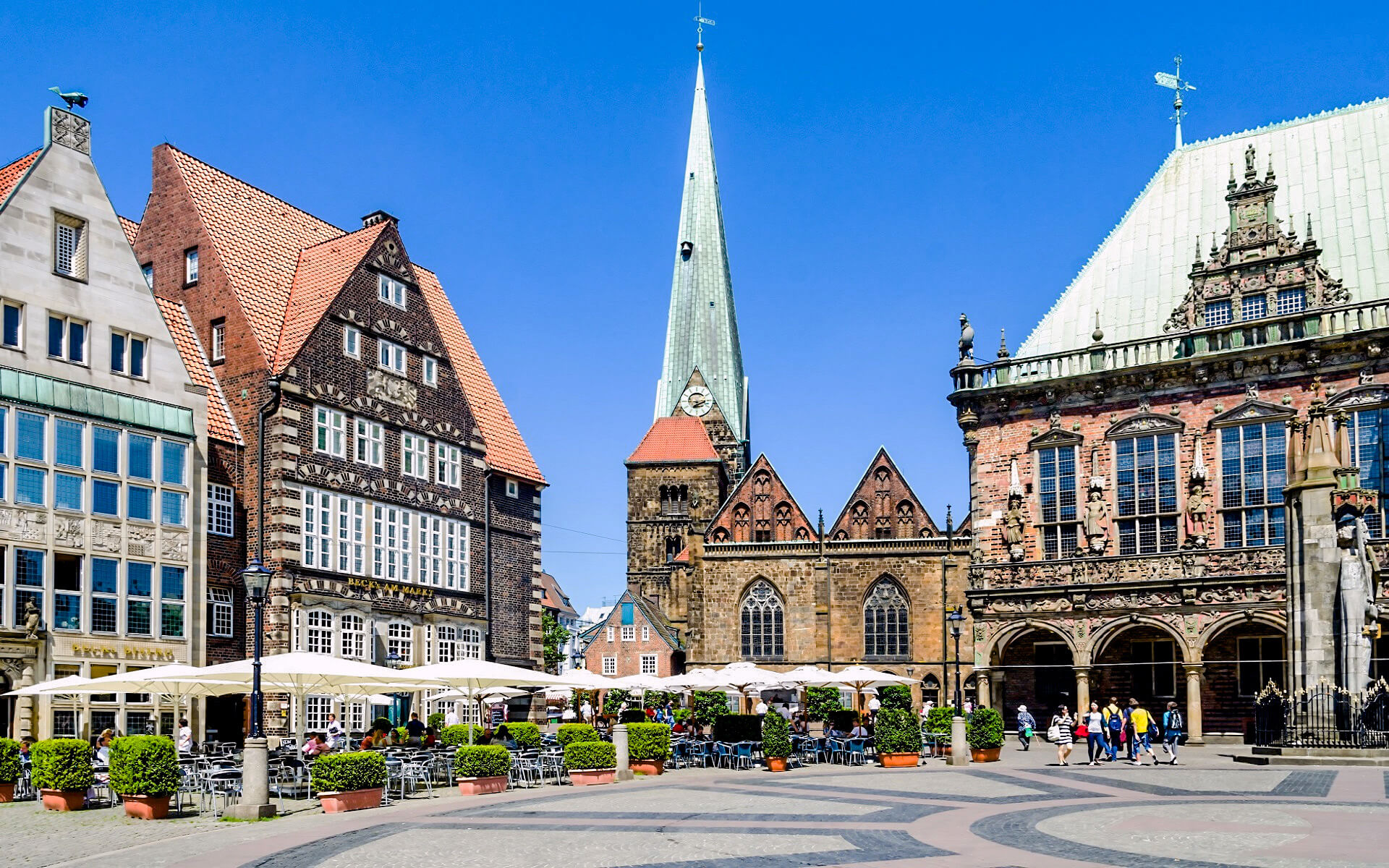 Bremen is a Hanseatic city in northern Germany that is part of the state Free Hanseatic City of Bremen, or just Bremen.

Bremen, a commercial and industrial city with a significant port on the River Weser, is part of the Bremen/Oldenburg Metropolitan Region, which has a population of 2.4 million people. Bremen is the second most populated city in Northern Germany and the tenth most populous city in Germany.

Bremen is a prominent cultural and economic center in northern Germany. Bremen has scores of historical galleries and museums, ranging from antique sculptures to significant art museums like the Übersee-Museum Bremen. Bremen is known as a working-class city. Bremen also has a considerable number of global corporations and industrial facilities. Hachez chocolate and Vector Foiltec are two companies based in Bremen. Werder Bremen, a four-time German football champion, is also situated in the city.

Bremen lies about 60 kilometers (37 miles) south of the mouth of the Weser on the North Sea. The two form the state of the Free Hanseatic City of Bremen, with Bremerhaven right on the mouth (official German name: Freie Hansestadt Bremen).

Among the most recent tourism attractions are:

Due to its closeness to the North Sea coast and temperate marine air masses that flow in with the typically westerly winds from the Atlantic Ocean, Bremen has a mild oceanic climate (Köppen climatic classification Cfb). However, continental air masses may prevail at any time of year, resulting in heat waves in the summer and protracted spells of frost in the winter. In general, extremes are uncommon in Bremen, with temperatures as low as 15 °C (5.0 °F) and as high as 35 °C (95.0 °F) occurring only every few of years. The record high temperature was 37.6 degrees Celsius (99.7 degrees Fahrenheit) on August 9, 1992, while the record low temperature was 23.6 degrees Celsius (10.5 degrees Fahrenheit) on February 13, 1940. Despite being some distance from the main North Sea, Bremen has a somewhat broader temperature range than Bremerhaven, which is situated near the mouth of the Weser.

Average temperatures have steadily increased in recent decades, resulting in a 0.6 °C (1 °F) increase in the mean annual temperature between the 1961–90 and 1981–2010 reference periods. As in much of Germany, 2014 was the hottest year on record, with an average temperature of 11.1 °C (52.0 °F), making Bremen the second-warmest German state after Berlin in 2014. While Bremen is situated in the rather foggy northern portion of Germany, average sunlight hours have increased significantly over the previous decades, particularly in the months of April, May, and July, leading the annual mean to climb by 62 hours between the two reference periods stated above. This trend has persisted over the previous ten years, which have seen an average of 1614 hours of sunlight, 130 hours greater than the worldwide reference period of 1961–90. Nonetheless, the winters remain exceedingly bleak by worldwide standards, with December averaging just one hour of sunlight (out of the seven astronomically possible) each day, a trait that Bremen shares with the majority of Germany and its neighboring nations.

Precipitation is reasonably evenly distributed throughout the year, with a modest rise in summer owing mostly to convective precipitation, i.e. showers and thunderstorms. Snowfall and the duration of snow cover are vary; although some years have little snow accumulation, there has lately been a string of extraordinarily snowy winters, with the record year 2010 reporting 84 days with a snow cover. Nonetheless, snow accumulations of more over 20 centimetres (8 in) are rare, with the record being 68 centimetres (26.8 in) on February 18, 1979.

Bremen’s hottest months are June, July, and August, with average high temperatures ranging from 20.2 to 22.6 °C (68.4 to 72.7 °F). The coldest months are December, January, and February, with average low temperatures ranging from 1.1 to 0.3 degrees Celsius (30.0 to 32.5 degrees Fahrenheit). Autumn remains pleasant far into October, as is typical of its seaside position, but spring comes later than in the country’s southern regions.

Bremen is located on both banks of the Weser River, about 60 kilometers (37 miles) upstream of its estuary on the North Sea and its transition to the Outer Weser at Bremerhaven. The “Middle Weser” becomes the “Lower Weser” opposite Bremen’s Altstadt, and the river has been made navigable to ocean-going boats from the vicinity of Bremen’s port. The Weser Marshes are located on the left bank of the Lower Weser, through which the Ochtum runs, while the Elbe-Weser Triangle is located on the right side. The downstream tributaries of the Weser are the Lesum and its tributaries, the Wümme and Hamme, as well as the Schönbecker Aue and Blumenthaler Aue.

The municipal territory of the city is about 38 kilometers (24 miles) long and 16 kilometers (9.9 miles) broad. Bremen is the thirteenth biggest city in Germany in terms of area, and the second largest city in northwest Germany after Hamburg, and the tenth largest in Germany overall.

Bremen, after Hamburg, is the region’s second development center. It is part of Airbus SAS’s manufacturing network, and it is where the wing units for all widebody Airbus aircraft are equipped, as well as tiny sheet metal components are manufactured. Another focus is structural assembly, which includes metal landing flaps. The construction of the landing flaps (high lift systems) is done here as part of the Airbus A380 manufacturing process. Before the A400M military transport aircraft is delivered to Spain, the fuselage portion (except the cockpit) is pre-assembled.

Bremen, Germany’s second biggest Airbus facility, employs about 3,100 people. Bremen is responsible for the design and construction of high-lift systems for Airbus aircraft wings as part of the Centre of Excellence – Wing/Pylon. The project office, technology engineering, flight physics, system engineering, structure development, verification testing, structural assembly, wing outfitting, and ultimate delivery to the final assembly line are all formed here. In addition, as part of the Centre of Excellence – Fuselage and Cabin, Bremen produces sheet metal elements such as clips and thrust crests for all Airbus aircraft.

Bremen is home to an EADS Astrium factory as well as the headquarters of OHB-System, the European Union’s first and third space firms.

Mercedes-Benz also has a plant in Bremen that produces the C, CLK, SL, SLK, and GLK models.

Beck’s and St Pauli Girl beers are made in Bremen by Beck & Co. When Bremen’s port was the “key to Europe,” the city boasted a significant number of wine importers, but that number has since shrunk to a mere few. Aside from that, there is another connection between Bremen and wine: exceptional wines were made here about 800 years ago. The world’s biggest wine cellar is situated in Bremen (below the city’s main plaza), and it was previously estimated to house over a million bottles, but it was looted by occupying troops during WWII.