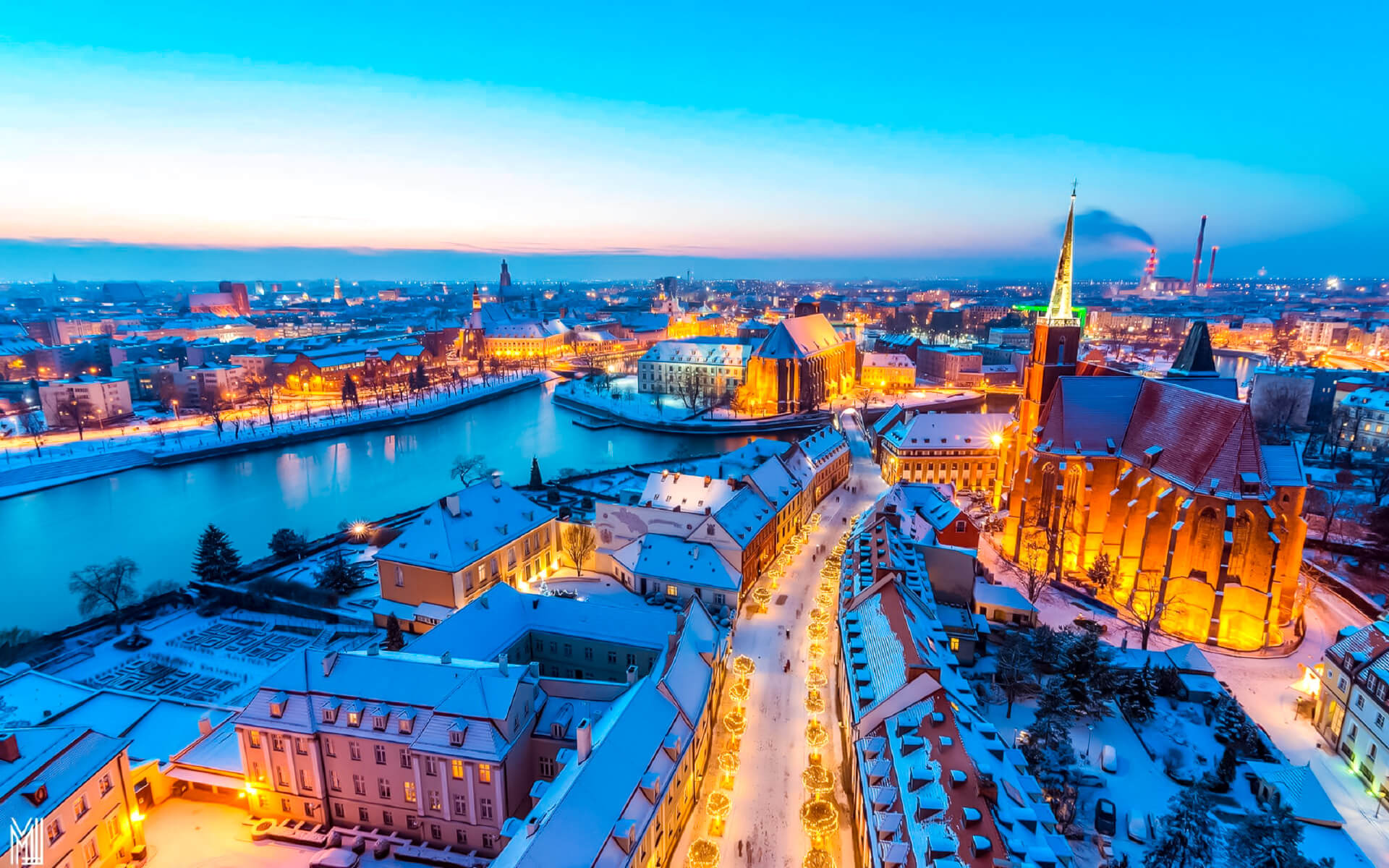 Wrocław is the most populous city in western Poland. It is located on the Oder River in Central Europe’s Silesian Lowlands, about 350 kilometers (220 miles) from the Baltic Sea to the north and 40 kilometers (25 miles) from the Sudeten Mountains to the south. Wrocław is the ancient capital of the Polish provinces of Silesia and Lower Silesia. It is the capital of the Lower Silesian Voivodeship nowadays. It has been a part of the Kingdom of Poland, Bohemia, Hungary, the Austrian Empire, Prussia, and Germany at different periods throughout history. As a consequence of post-World War II boundary modifications, it became a part of Poland in 1945. Wroclaw has a population of 635 759 people in 2015, making it Poland’s fourth-largest city.

According to GaWC, Wroclaw is a worldwide metropolis with a high sufficiency and living level. In 2015, it was ranked among 230 cities worldwide in the consulting firm Mercer’s “Best City to Live” list, and it was the only Polish city in this ranking to be recognized as a city expanding at the business core.

In 2016, the city was designated as a European Capital of Culture as well as the World Book Capital. In addition, in 2016, Wroclaw will host the Theatre Olympics, World Bridge Games, and European Film Awards, as well as the IFLA Annual Conference and World Games in 2017.

The Tourist Information Centre (Polish: Centrum Informacji Turystycznej) is situated in building No.14 on Market Square.

On the market, there is free wireless Internet (Wi-Fi) access.

LANDMARKS AND POINTS OF INTEREST

Wrocław’s oldest neighborhood is Ostrów Tumski. It was historically known as the Cathedral Island between the forks of the Oder River, and it housed the Wrocław Cathedral, which was erected in the mid-tenth century.

The Old Town Hall is prominently shown in the 13th century Main Market Square (Rynek). The St. Elisabeth’s Church (Bazylika w. Elbiety) with its 91,46 m tower and viewing deck is located in the north-west corner of the market square (75 m). The Shambles, located north of the church, has the Monument of Remembrance of Animals for Slaughter (pl). Salt Square (now a flower market) is situated in the market square’s southwest corner. The St. Mary Magdalene Church (Koció w. Marii Magdaleny), built in the 13th century, is located near the plaza, between Szewska and Aciarska streets.

The Centennial Hall (Hala Stulecia; German: Jahrhunderthalle), constructed by Max Berg in 1911–1913, was designated a UNESCO World Heritage Site in 2006.

Sailing on tiny passenger watercraft on the Oder is a popular way to view the sites, as is touring the city on antique trams or the converted open-topped vintage bus Jelcz 043. Seeking for Wroclaw’s dwarfs is another intriguing approach to explore the city. The adjacent Mount Ślęża is a renowned tourist attraction.

Wroclaw is home to 401 millionaires, or those with an annual income of more over one million PLN (as per 2014).

The city has had a growing high-tech industry since the beginning of the twenty-first century. The Wrocław Technology Park is home to many high-tech companies, including Baluff, CIT Engineering, Caisson Elektronik, ContiTech, Ericsson, Innovative Software Technologies, IBM, IT-MED, IT Sector, LiveChat Software, Mitsubishi Electric, Maas, PGS Software, Technology Transfer Agency Techtra, and Vratis. There are factories of LG (LG Display, LG Electronics, LG Chem, LG Innotek), Dong Seo Display, Dong Yang Electronics, Toshiba, and many other companies, primarily from the electronics and home appliances sectors, in Biskupice Podgórne (Community Kobierzyce), as well as the Nowa Wie Wrocawskafactory and distribution center of Nestlé Purina and factories of a few other enterprises.

Engine Business was created between 2013 and 2015. Over 250 enterprises from approximately 60 different sectors are located in Wrocław Industrial Park. The American corporation UTC Aerospace Systems has a research and development facility in Wrocław called the Global Engineering Centre.

The city is home to the Wrocław Research Centre EIT+, which houses everything from geological research facilities to the unusual and Lower Silesian Cluster of Nanotechnology.

Wrocław is home to the headquarters of the following banks: Crédit Agricole Bank of Poland, Bank Zachodni WBK, Euro Bank, and Santander Consumer Bank, as well as finance and accounting centers for Volvo, Hewlett-Packard, KPIT Cummins, UPS, GE Money Bank, and Credit Suisse. The city has the most leasing firms and debt collection agencies in the nation, including the biggest European Leasing Fund.

DHL, FedEx, and UPS have logistics hubs in Wrocław.

Because of its closeness to the borders with Germany and the Czech Republic, Wrocław and the Lower Silesia area are important import and export partners with these nations.