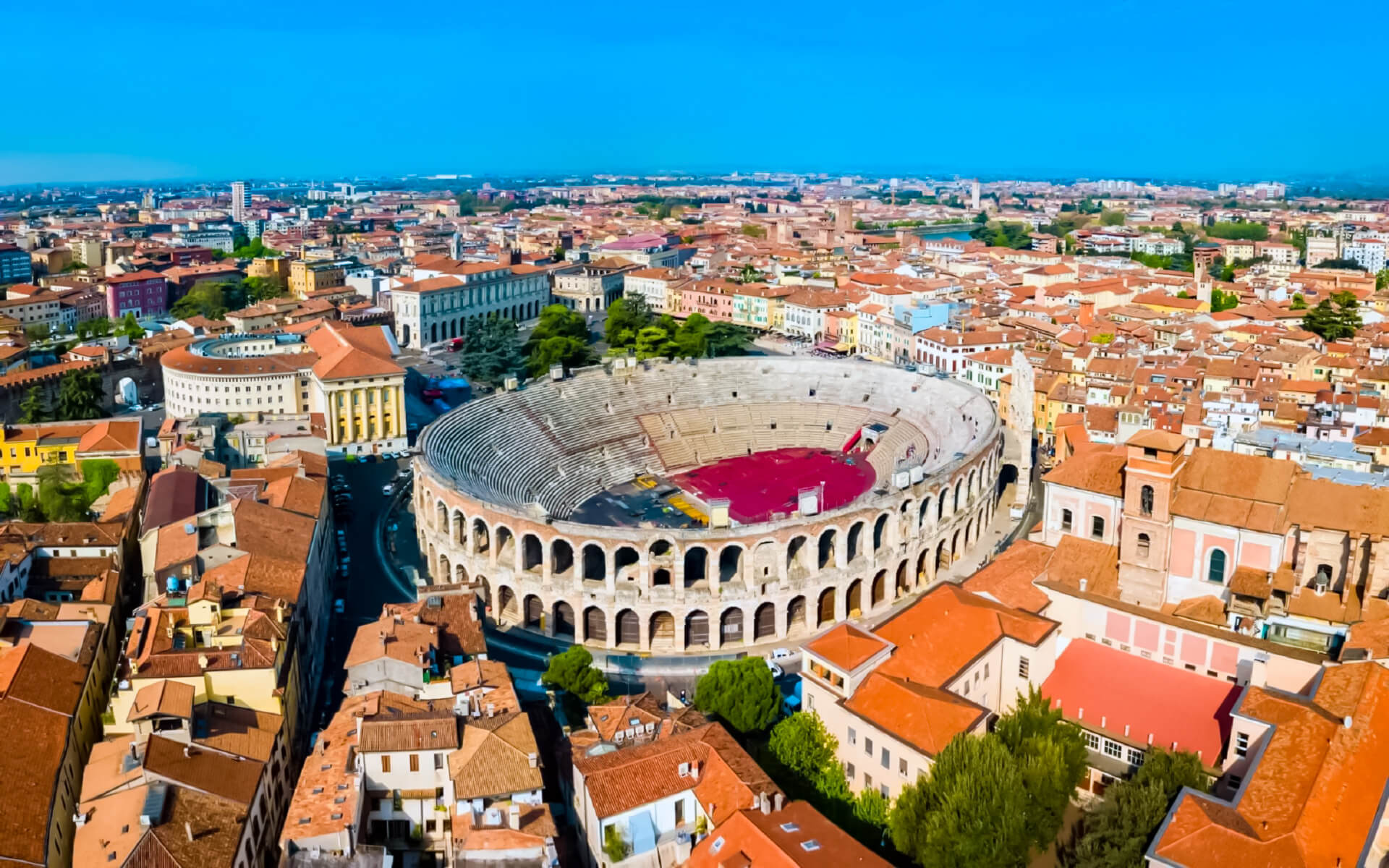 Verona is a city on the Adige river in Veneto, northern Italy, with a population of over 265,000 people and one of the region’s seven provincial capitals. It is the region’s second biggest city municipality and the third largest in northeast Italy. Verona’s metropolitan area is 1,426 km2 (550.58 sq mi) in size and has a population of 714,274 people. Because of its artistic past and various yearly fairs, plays, and operas, such as the lyrical season in the Arena, the historic amphitheatre erected by the Romans, it is one of the most popular tourist sites in northern Italy.

Verona is the setting for three of Shakespeare’s plays: Romeo and Juliet, The Two Gentlemen of Verona, and The Taming of the Shrew. UNESCO designated the city as a World Heritage Site due to its urban organization and architecture.

Verona is a historic city in the Veneto region of north-eastern Italy with a population of roughly a quarter of a million people. It is well known as the location for Shakespeare’s Romeo and Juliet, and it is on the UNESCO World Heritage list.

Despite its proximity to the more famous tourist attraction of Venice, many people believe Verona to be a more easygoing and enjoyable location to visit.

Verona has been designated a UNESCO World Heritage Site due to the richness and significance of its numerous historical structures. In the early Middle Ages, Verona kept numerous old Roman structures that were no longer in use, but most of these, as well as much of its early medieval edifices, were destroyed or severely damaged by the earthquake of 3 January 1117, which resulted in a huge Romanesque reconstruction. Versus de Verona, written during the Carolingian period, is a significant account of Verona in the early medieval age.

The Roman military encampment in what is now the city center intended to grow via the cardines and decumani, which cross at right angles. This construction has been preserved to the current day and may be seen from the air. The initial map has not been altered as a result of further development. Though the Roman city, with its basalt-paved roadways, is largely concealed from view, it still remains almost whole approximately 6 m below the surface. The basements of most palazzi and buildings are constructed on Roman relics and are seldom accessible to tourists. Cangrande I and Cansignorio della Scala I, lords of Verona, recreated Piazza delle Erbe, near the Roman forum, utilizing material (such as marble blocks and sculptures) from Roman baths and palaces.

Verona is well-known for its Roman amphitheatre, the Arena, which is located on the city’s main square, Piazza Bra. It was built about 30 AD and is the third biggest in Italy after Rome’s Colosseum and Capua’s arena. It is 139 metres long and 110 metres broad, with 44 levels of marble seats that can accommodate 25,000 spectators. The ludi (shows and gladiator games) staged inside its walls were so well-known that they drew people from far beyond the city’s borders. The present two-story façade is really the internal support for the tiers; just a sliver of the original three-story outer perimeter wall in white and pink Valpolicella limestone survives. The inside is quite spectacular and almost intact, and it is still used for public events, fairs, theater, and open-air opera during beautiful summer evenings.

There are also a number of other Roman remains in the town, such as the Verona Roman Theatre. This theatre was erected in the first century BC, but it fell into usage over time and was eventually demolished to make way for dwellings. Andrea Monga, a rich Veronese, acquired all the homes that had been erected above the theatre over time in the 18th century, dismantled them, and rescued the monument. The Ponte di Pietra (“Stone Wall Bridge”), another Roman structure that has survived to the present day, is not far away.

The Arco dei Gavi (Gavi Arch) was erected in the first century AD and is notable for having the name of the builder (architect Lucius Vitruvius Cordone) etched on it, which is unusual in Belle Epoque architecture. It previously straddled the city’s principal Roman route, today known as the Corso Cavour. It was destroyed in 1805 by French forces and reconstructed in 1932.

The Porta Borsari, an archway at the end of Corso Porta Borsari, is nearby. The facade of a 3rd-century gate in the old Roman city fortifications. The inscription dates from 245 AD and shows the name of the city as Colonia Verona Augusta. Corso Porta Borsari, the route that runs through the gate, is the Roman city’s original Via Sacra. It is now flanked by many Renaissance palazzi and the historic Church of Santi Apostoli, only a few metres from Piazza delle Erbe.

Porta Leoni is a 1st century BC remnant of what was once a Roman city gate. A considerable section of it is still surviving as part of a medieval building’s wall. The street itself is an open archaeological site, with the old Roman roadway and entrance foundations visible a few feet below the current street level. The gate, as viewed from there, comprises a tiny court defended by towers. Before entering or leaving the city, carriages and passengers were examined here.

Verona has a humid subtropical climate typical of Northern Italy’s interior plains, with scorching summers and chilly, humid winters, despite the fact that Lake Garda’s almost-Mediterranean climate has a little impact on the city. The relative humidity is high all year, particularly in the winter, when it generates fog, mostly from dark till late morning, but this phenomena has been less common in recent years.

Melbourne is the capital and most populous city of Victoria, as well as the second most populated city in Australia and Oceania. The word...
Read more

Buenos Aires is Argentina’s capital and biggest city, as well as the country’s second-largest metropolitan region. It is situated on the southeastern coast of the...
Read more

Malé is the capital and the most populated city of the Maldives. It is also one of the world’s most densely inhabited cities, with...
Read more

Hvar is a Croatian Adriatic Sea island situated off the Dalmatian coast, between the islands of Bra, Vis, and Korula. The island of Hvar,...
Read more

Port Vila, Vanuatu’s capital and biggest city, is situated on the island of Efate. Port Vila is Vanuatu’s economic and commercial center, located on the...
Read more

Jakarta is the capital and biggest city of Indonesia (though it is officially a province), as well as one of the world’s most populated...
Read more
Travel tips