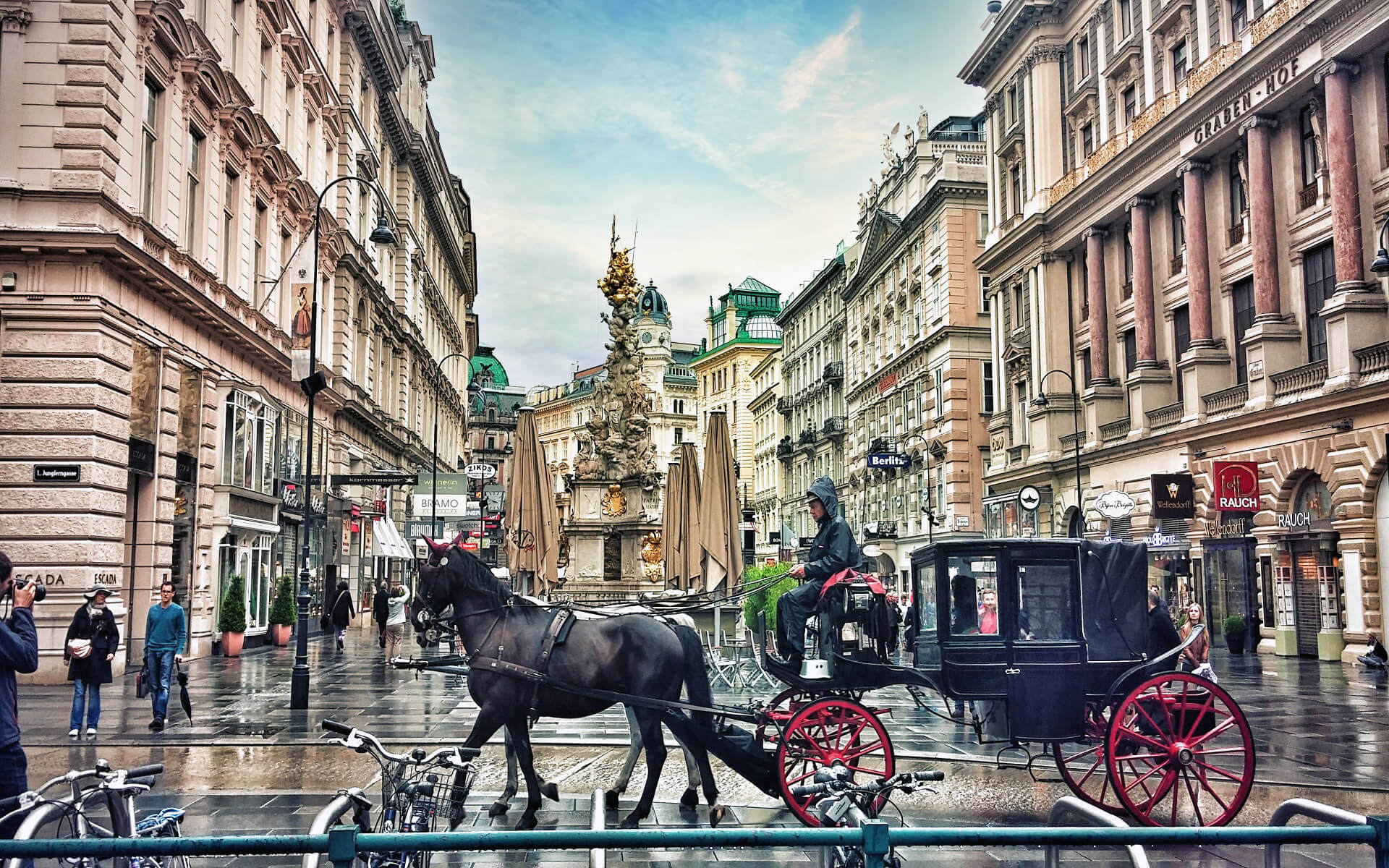 Vienna is Austria’s capital and biggest city, with a population of around 1.8 million (2.6 million including the metropolitan region), as well as its cultural, economic, and political center.

It is well-known for its excellent living standards, casual but sophisticated lifestyle, and vibrant musical scene.

The thing about Vienna is that it has always been a large city – as the former home of the Habsburg court and its various empires, it has always housed a large population and enjoyed a privileged position, being home to many artists, particularly composers such as Beethoven, Haydn, Liszt, Mozart, and Schubert. It was the world’s biggest German-speaking city for a long time until being eclipsed by Berlin. The UNESCO World Heritage List includes the huge historic city center of Vienna, which is packed with monuments representing the city’s imperial history.

Many significant international organizations, like the United Nations and OPEC, are headquartered in Vienna. The city is located in eastern Austria, near the borders of the Czech Republic, Slovakia, and Hungary.

Vienna is well-known for its high standard of living. In a 2005 assessment of 127 international cities, Vienna was named top among the most habitable city in the world.

Vienna was the world’s number one location for international congresses and conventions between 2005 and 2010. Every year, around 3.7 million visitors visit.

The royal palaces of Hofburg and Schönbrunn (also home to the world’s oldest zoo, Tiergarten Schönbrunn) and the Riesenrad on the Prater are major tourist attractions. The Burgtheater, the Wiener Staatsoper, the Lipizzaner horses at the spanische Hofreitschule, and the Vienna Boys’ Choir are among the cultural attractions, as are visits to Vienna’s Heurigen suburb Döbling.

There are several prominent places linked with composers who resided in Vienna, such as Beethoven’s many apartments and grave at Zentralfriedhof (Central Cemetery), Vienna’s biggest cemetery and the last resting place of many notable individuals. Mozart is buried at the Habsburg Gardens and the St. Marx Cemetery (where his grave was lost). St. Stephen’s Cathedral, the Deutschordenskirche, the Jesuitenkirche, the Karlskirche, the Peterskirche, Maria am Gestade, the Minoritenkirche, the Ruprechtskirche, the Schottenkirche, St. Ulrich, and the Votivkirche also attract big audiences.

The Hundertwasserhaus, the United Nations headquarters, and the view from the Donauturm are also modern attractions.

Vienna is located at the crossroads of oceanic and humid continental climates.

Vienna is situated in northeastern Austria, in the Vienna Basin, at the easternmost extension of the Alps. The original settlement was south of the flowing Danube, where today’s inner city is located, but the city now covers both banks of the river. The elevation varies from 151 to 542 meters (495 to 1,778 ft). The city has a total size of 414.65 square kilometers (160.1 square miles), making it Austria’s biggest city by area.

Vienna is one of the richest areas in the European Union, accounting for 25.7 percent of Austria’s GDP in 2013 with a gross regional product of EUR 47,200 per capita. It is equivalent to 159 percent of the EU average. From 2012 to 2015, the city rose in the ranking of the most economically powerful cities, reaching number nine on the list.

The service industry is Vienna’s most significant economic sector, accounting for 85.5 percent of total value added. Industry and commerce account for 14.5 percent of gross value added, whereas agriculture accounts for 0.07 percent and hence plays a minimal part in local added value. The cultivation and production of wines inside the city limits, on the other hand, has a high socio-cultural importance. Trade (14.7 percent of added value in Vienna), scientific and technology services, real estate and housing operations, and manufacture of commodities are the most prominent business sectors. In 2012, Vienna contributed over 60% of Austria’s outgoing and incoming foreign direct investments, demonstrating Vienna’s importance as an international center for local and foreign enterprises.

Since the collapse of the Iron Curtain in 1989, Vienna’s role as a gateway to Eastern Europe has grown: 300 worldwide corporations have their Eastern European headquarters in Vienna and its surroundings. Hewlett Packard, Henkel, Baxalta, and Siemens are among them. Due to the city’s historical significance as the center of the Habsburg Empire, companies in Vienna have broad relationships and competencies in doing business with Eastern Europe. The number of multinational enterprises in Vienna continues to grow: 159 international firms opened offices in Vienna in 2014.

Since 2004, roughly 8,300 new businesses have been established in Vienna. The bulk of these businesses are involved in industry-oriented services, wholesale commerce, information and communications technology, and new media. Vienna is working hard to promote itself as a startup hotspot. Since 2012, the city has hosted the annual Pioneers Festival, the biggest start-up event in Central Europe, which takes place in Hofburg Palace and attracts over 2.500 international participants. Tech Cocktail, an online start-up platform, has named Vienna sixth among the top ten start-up cities in the world.

Check that your smartphone is not using roaming data, since this can result in a hefty fee, particularly if you are not from the EU.

In Vienna, there are several generally free wifi hotspots in pubs, restaurants, and cafés. Locally, Wifi is referred to as WLAN or Wireless LAN. Those who are connected to the Freewave Wi-Fi network may be discovered on this page. MuseumsQuartier offers free wireless internet access. Except for the first district, there are a plethora of internet cafés. Many phone booths include touch-screen media terminals (with internet access), and most of the material about Vienna is free. If you want to travel locations outside of the city and do not want to be without internet, it is best to get a prepaid 3G-simcard (all carriers provide fast 3G service, even in rural and isolated parts of Austria) and insert it into your smartphone or internet USB stick. Download speeds are typically in the 5-6 Mbit/sec range, with upload speeds in the 2-3 Mbit range (for HSDPA). The monthly cost of mobile internet ranges from 4 euros (1GB) to 15 euros (unlimited) (August 2011). A1 a1.at has the greatest 3G coverage in rural regions. HSDPA, HSPA+, and LTE are all available in Vienna.

FLINK provides Austrian travelers with the first rentable mobile hotspots. Deliver your hotspot to any place in Vienna. Throughout your travel, you’ll have access to a fast, dependable, and unlimited Internet connection with no data roaming.

FM4, the local public radio station geared at young people, used to be an English-language channel and still broadcasts a lot of programming in English, including news. 91.0 FM or 103.8 FM

Austrian television is nearly entirely in German. The national public broadcaster ORF provides minimal programming in numerous Slavic languages as well as Hungarian. There are several worldwide English-language channels to choose from.

The Austrian Times is a newspaper that publishes Austrian news in English. The Vienna Review examines local topics in more detail. International papers may be found in a variety of places. Because of its brown tone, the Monday issue of the local daily Der Standard has a New York Times supplement that may be discovered immediately in coffee shops and elsewhere.

Zimbabwe, formally the Republic of Zimbabwe, is a landlocked sovereign state in southern Africa, sandwiched between the Zambezi and Limpopo rivers. It is bounded...
Read more

Kampala, The City of Seven Hills is the capital metropolis of Uganda and, by far, the country’s biggest conurbation and sole genuine city. It...
Read more

Mostar is a city in Bosnia and Herzegovina that was formerly one of the most ethnically diverse cities in the nation but is now...
Read more

Monza is a city and comune in the Lombardy region of Italy, some 15 kilometers (9 miles) north-northeast of Milan, on the River Lambro,...
Read more
Winter destinations