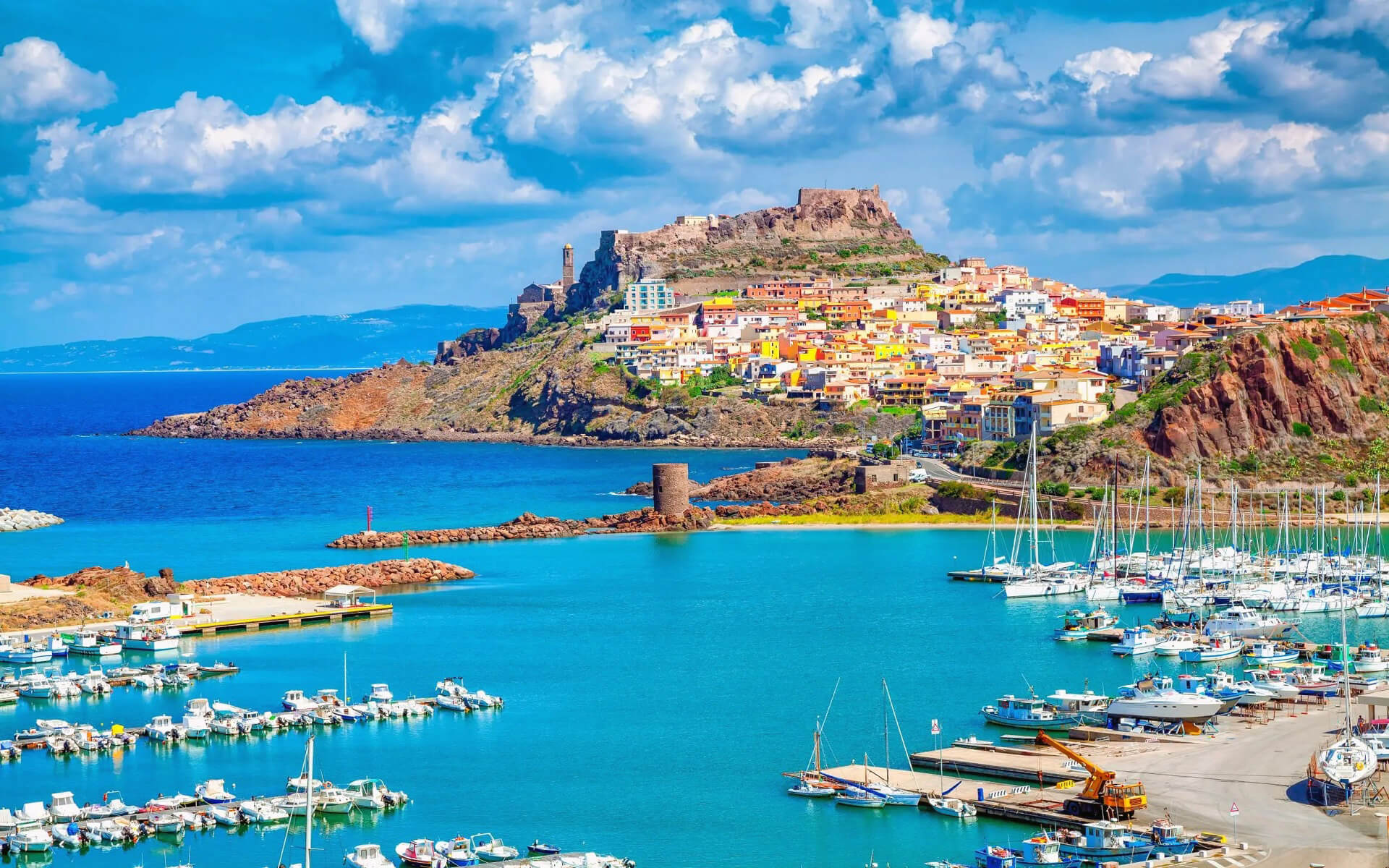 Sardinia (Sardegna/Sardigna) is the Mediterranean Sea’s second biggest island, located between the Balearic Islands and the Italian peninsula, south of Corsica. It is an Italian autonomous region.

Sardinia is the fourth least populous region in Italy, with a population density of 69/km2, little more than a third of the national average. In the recent past, the population distribution was unusual in comparison to other Italian seaside districts. In reality, contrary to popular belief, with the exception of the fortified towns of Cagliari, Alghero, Castelsardo, and a few others, most urban settlement has occurred predominantly in subcoastal regions and towards the center of the island, rather than along the coast. The periodic Saracen attacks throughout the Middle Ages, followed by Barbary raids until the early 19th century (making the coast insecure), large pastoral activity inland, and the marshy environment of the coastal plains are all historical causes for this (reclaimed definitively only in the 20th century). With the growth of beach tourism, the situation has shifted; currently, all of Sardinia’s main urban centers are situated around the coastlines, while the island’s interior is sparsely inhabited.

It has Italy’s lowest total fertility rate (1.087 births per woman) and the second-lowest birth rate (which is already one of the lowest in the world). When combined with the rapid aging of the population (people over the age of 65 accounted for 18.7 percent of the population in 2009), rural depopulation is a major issue: between 1991 and 2001, 71,4 percent of Sardinian villages lost population (32 more than 20% and 115 between 10% and 20%), with over 30 of them on the verge of becoming ghost towns. Nonetheless, the general population has grown due to a significant influx of immigrants, mostly from the Italian mainland, Eastern Europe (particularly Romania), Africa, and Asia.

Along with Italian (Italiano), Sardinians speak one of the dialects of Sardinian (Sardu), which is regarded by many researchers to be one of the most conservative Romance languages; it is not, by any means, an Italian dialect and is often viewed as an insult by locals. There are other linguistic minorities within the main one, where Sardinian has long vanished or is poorly understood: in Gallura and Sassari, they speak Corsican, whose local variety is known as Gallurese (Gadduresu), and a transitional dialect between medieval Tuscan and Sardinian (Sassaresu), in Alghero Catalan (Alguerés), and on San Pietro Island, a Ligurian dialect (Tabarch Nowadays, as a direct result of the Italian government’s island-wide assimilation policy, Sardinians generally speak Italian with a distinct accent as their mother tongue, which is displacing indigenous languages, especially when addressing people they do not know, even if they are speaking with other Sardinians. Outside of the cities, English is not widely spoken, with the exception of perhaps the young; you might have better luck in the cities with another Neo-Latin language, especially with people older than 50 years, but expect nothing but Italian (often combined with the Sardinian language or one of the dialects listed above).

Sardinia, with its characteristic Mediterranean beauty, is mostly popular for swimming, boating, windsurfing, trekking, climbing, and camping, with coastal regions becoming overcrowded, particularly in August, the hottest month. The interior life of the island away from the tourist traps takes longer to comprehend and necessitates peeling back the layers of obvious Italianization. After all, the ancient Nuragic culture of Sardinia, which left stone monuments that may still be seen today, predates even the Etruscan civilization of mainland Italy by several hundred years.

Sardinia has a Mediterranean climate for the most part. It is, nevertheless, greatly affected by the closeness of the Gulf of Genoa (barometric low) and the Atlantic Ocean. Because Sardinia is somewhat big and mountainous, the weather is not consistent; the east, in particular, is dryer, but strangely experiences the heaviest rainstorms: in Autumn 2009, it poured more than 200 mm (8 inches) in Siniscola in a single day. Even at low elevations, the western coast is rainy (for instance Iglesias, elevation 200 m, average annual precipitation 815 mm against 750 mm for London).

Sardinia is Italy’s sole territory of Hercynian origin; in fact, the southwest is much older (Cambrian). Sardinia’s mineral richness are the result of intense hydrothermalism during the Permo-Triassic period. Erosion has taken its toll on the region’s heights, as it has on the rest of Hercynian Europe, since the orogeny. The Sardinia-Corsica block began to split from mainland Spain 30 million years ago and slanted toward its current location. The island is neither seismic nor volcanic.

Sardinia is the Mediterranean Sea’s second biggest island (24090 square kilometers [9300 square miles]); only Sicily is bigger. The island is dominated by the Gennargentu Range (which culminates at Punta La Marmora, 1834 m [6017 ft], Sardinia’s highest elevation), as well as the Monte Limbara, Monte di Ala’, and Monte Rasu ranges (all below 1500 m [4900 ft]); isolated are the Sulcis-Iglesiente hills (1236 m [4055 ft]) of Southwestern Sardinia Plains are few and far between, with the exception of the Campidano Plain from Oristano to Cagliari, which separates the main hill system from the Sulcis-Iglesiente, and the Nurra Plain in the northwest (between Sassari, Alghero, and Porto Torres), which was once a mining district and heavily forested but is now mostly given over to pasture. In the 1940s, malaria was still endemic in Sulcis proper (in the far Southwest) (but eradicated since). Cagliari’s surroundings are equally flat and swampy, with salt extraction being a significant business.

The coasts are mainly rocky and tall, particularly throughout the eastern half; nevertheless, big beaches may be found in the north and northeast (Logudoro and Gallura), south (from Teulada to Pula), and southwest (Sulcis-Iglesiente). Aside from the infamous Strait of Bonifacio, which connects Corsica and Sardinia, the surrounding water is fairly deep at short distances from the coast.

The population is tiny (a little more than 1 650 000 people in 2010), with a high concentration in Cagliari (one-third of the total population) and Sassari (one-fifth); Olbia is the only other town with more than 50 000 people. Alghero, Nuoro, Oristano, Carbonia, and Iglesias are some of the other towns. Sardinia, along with the Valle d’Aosta area on the French border, has Italy’s lowest population density.

The Sardinian economy, however, is restricted by high transportation and power prices, which are double those of the continental Italian regions and quadruple that of the EU average. Sardinia is the only Italian region that produces an excess of electricity and exports it to Corsica and the Italian mainland: in 2009, the new submarine power cable Sapei went into operation, connecting the Fiume Santo Power Station in Sardinia to the converter stations in Latina, on the Italian peninsula; and since 1965, the SACOI is another submarine power cable that connects Sardinia to Italy, crossing Corsica. The GALSI undersea gas pipeline would have connected Algerian gas to the Italian mainland through the island.

Sardinia is home to three major banks: the Banco di Sardegna and the Banca di Sassari, both situated in Sassari; and the Banca di Credito Sardo, based in Cagliari, which was acquired by parent firm Intesa Sanpaolo in 2014.

The unemployment rate in the fourth quarter of 2008 was 8.6 percent; by 2012, it had risen to 14.6 percent. Its increase was caused by the global financial crisis, which impacted Sardinian exports, which were primarily centered on refined oil, chemical goods, as well as mining and metallurgical items.

Sardinia has the potential to become a tax haven, with the whole island territory exempt from customs charges, VAT, and fuel excise taxes; since February 2013, the town of Portoscuso has been the first free trade zone.

Article 12 of the Sardinian Statute, as amended by the regional parliament in October 2013: “The territory of the Autonomous Region of Sardinia is situated beyond the customs line and creates a Free Trade Zone surrounded by water; entry points include seaports and airports. The Sardinian Free Trade Zone is governed by European Union and Italian legislation, which are also in effect in Livigno, Campione D’Italia, Gorizia, Savogna d’Isonzo, and the Region of Aosta Valley “..

Rotterdam is a Dutch city in South Holland, situated in the Rhine–Meuse–Scheldt river delta on the North Sea. Its history dates back to 1270,...
Read more

Davao City is a densely populated city on the Philippine island of Mindanao. It has a population of 1,632,991 inhabitants as of the 2015...
Read more

Bandung is the capital of West Java province in Indonesia and the country’s third largest city by population, with over 2.4 million people, and...
Read more

Sihanoukville, commonly known as ‘Kompong Som’ (Khmer: កំពង់សោម), is a seaside city in Cambodia and the seat of Sihanoukville Province. It is situated at...
Read more

Cannes is a city on France’s French Riviera. It is a commune in the region of Alpes-Maritimes in France, and it is the location...
Read more
Unusual places