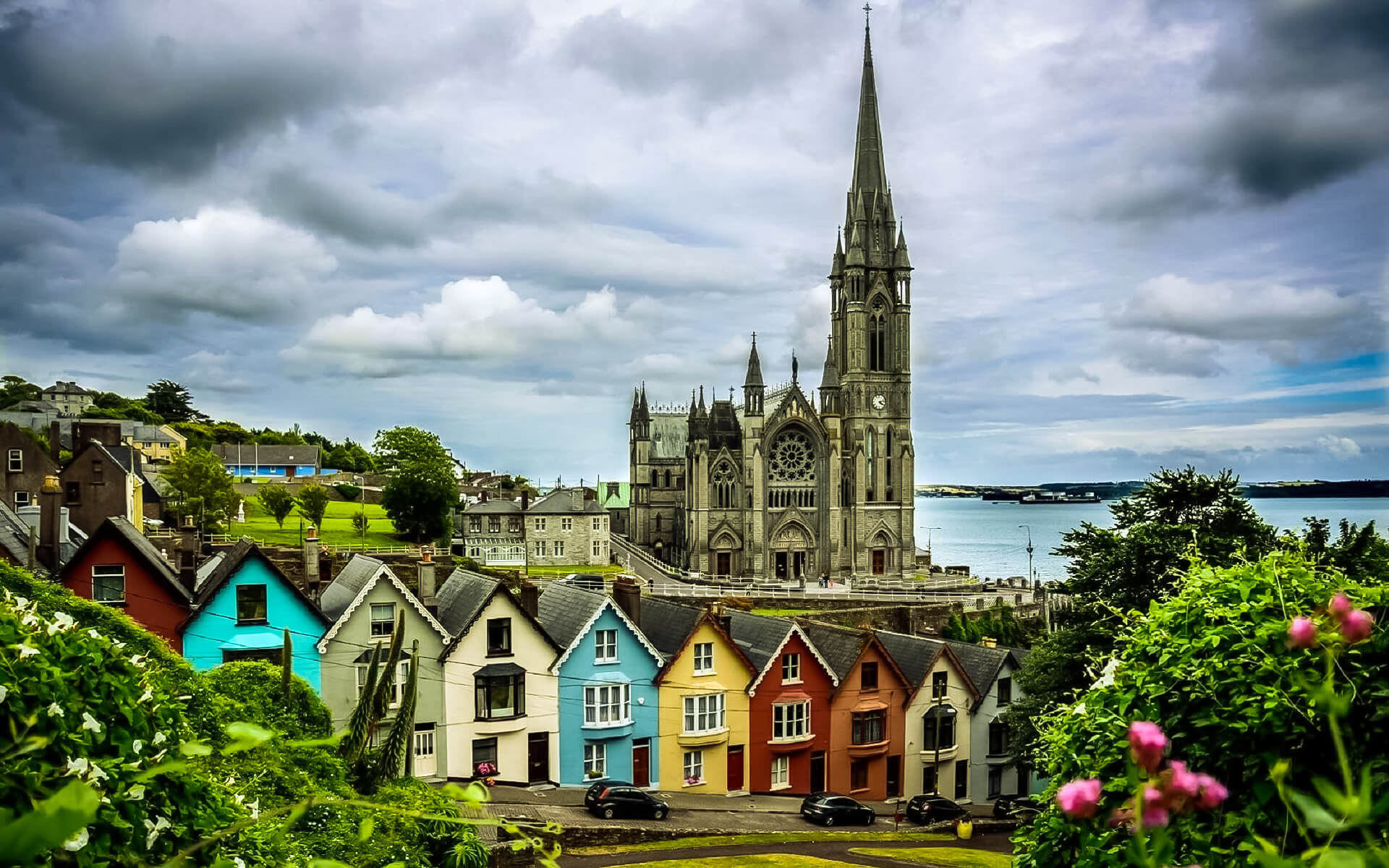 Cork is a city in Ireland, situated in the province of Munster in the South-West Region. It is the second biggest city in the state and the third most populated on the island of Ireland, with a population of 119,230. The population of the wider Metropolitan Cork region (which includes a number of satellite towns and suburbs) exceeds 300,000 people. The city was named the European Capital of Culture in 2005.

The city is situated on the River Lee, which breaks into two channels near the city’s western end, dividing the city center. They re-join at the eastern end, where quays and docks along the river banks stretch out to Lough Mahon and Cork Harbour, one of the world’s biggest natural harbours.

The city’s nickname “the renegade city” stems from its support for the Yorkist cause during the English Wars of the Roses in the 15th century. Corkonians sometimes refer to the city as “the true capital,” referring to its position as the center of anti-treaty troops during the Irish Civil War.

Cork has a number of architecturally significant structures dating from the Middle Ages to the Modern Era. The Red Abbey is the sole significant Medieval relic. The city has two cathedrals: St. Mary’s Cathedral and Saint Fin Barre’s Cathedral. St Mary’s Cathedral, often known as the North Cathedral, is the city’s Catholic cathedral and was built in 1808. Its prominent tower was built in the 1860s. St Fin Barre’s Cathedral, the most prominent of the two, serves the Protestant religion. It stands atop the ruins of an ancient cathedral. Under the leadership of architect William Burges, construction started in 1862 and was completed in 1879.

St. Patrick’s Street, the city’s major boulevard, was renovated in the mid-2000s and is noted for the design of the buildings along its pedestrian-friendly path. It is dominated at its northern end by the Father Mathew statue. Its curving form is due to the fact that it was once a conduit of the River Lee that was built over on arches. The General Post Office is located on Oliver Plunkett Street, on the site of the Theatre Royal, which was erected in 1760 and burnt down in 1840. In 1850, the English circus owner Pablo Fanque established an amphitheatre on the site, which was then converted into a theatre and, finally, into the current General Post Office in 1877. The Grand Parade is a tree-lined boulevard lined with offices, boutiques, and financial organizations. The South Mall is the ancient financial district, with some banks whose interiors date from the nineteenth century, such as the Allied Irish Bank, which was originally an exchange.

Many of the city’s buildings are in the Georgian style, however there are a few newer iconic structures, such as the County Hall tower, which was formerly the highest building in Ireland until it was surpassed by another Cork City skyscraper, The Elysian. The prominent sculpture of two men, known locally as ‘Cha and Miah,’ stands outside County Hall. Across the river from County Hall is Ireland’s longest structure; constructed in the Victorian era, Our Lady’s Psychiatric Hospital has been refurbished and transformed into Atkins Hall, named after its architect, William Atkins.

Cork’s most renowned structure is the Shandon Church Tower, which dominates the city’s north side. It is generally considered as the city’s icon. The north and east sides are encased in red sandstone, while the west and south sides are clad in the region’s main stone, white limestone. A weather vane in the shape of an eleven-foot fish rests atop the structure.

Cork City Hall, another remarkable limestone structure, replaced the old one, which was burnt during the War of Independence by the Black and Tans in an action known as the “Burning of Cork.” As a gesture of peace, the UK government paid for the construction of this new edifice in the 1930s.

Elizabeth Fort, the Cork Opera House, Christ Church on South Main Street (now the Triskel Arts Centre and the original site of an early Hiberno-Norse church), St Mary’s Dominican Church on Popes Quay, and Fitzgerald’s Park to the west of the city, which houses the Cork Public Museum, are also noteworthy. The grounds of University College Cork, through which the River Lee runs, the angling lake known as The Lough, the Women’s Gaol at Sundays Well (now a history site), and the English Market are among famous tourist destinations. This covered market goes back to 1610, and the current structure was built in 1786.

There were also two significant commercial breweries in the city until April 2009. The Beamish and Crawford brewery on South Main Street closed in April 2009, and production was moved to the Murphy’s brewery in Lady’s Well. This brewery makes Heineken for the Irish market as well. The Franciscan Well brewery also serves the local market with a range of lagers, ales, and stouts. Food and Wine Magazine named it the “Best Microbrewery in Ireland” in May 2008.

If you’re in Cork City on a Friday night and want to appreciate the city’s pub culture, the Cork City Pub Crawl is a terrific way to do it. It’s a pub crawl/tour/party organized by active local youngsters with the goal of generating a buzz or a bit of craic among Cork City’s visitors and residents. Every Friday, it begins at 20:00 outside the GPO on Oliver Plunkett St. and takes the group to four pubs and a club in Cork. There is a €10 fee, but it saves you money since it includes at least one shot of jaegermeister, one shot of whiskey/tequila, two shots of apple sourz, and admission to the club. The group is a dynamic mix of locals and travellers who are all eager for a good time.

Cork’s climate, like that of the rest of Ireland, is moderate oceanic and varied, with ample rainfall and few temperature extremes. Plant Hardiness Zone 9b applies to cork. Met Éireann operates a climatological weather station at Cork Airport, which is located a few kilometers south of the city. It should be noted that the airport is located at an elevation of 151 meters (495 feet), and temperatures between the airport and the city may sometimes change by a few degrees. Smaller synoptic weather stations may also be found at UCC and Clover Hill.

Temperatures below 0 degrees Celsius (32 degrees Fahrenheit) or over 25 degrees Celsius (77 degrees Fahrenheit) are uncommon. Cork Airport receives a yearly average of 1,227.9 millimetres (4.029 ft) of precipitation, the majority of which is rain. The airport reports an average of 7 days of hail and 11 days of snow or sleet every year, but only 2 days of lying snow. Because to the city’s low elevation and the moderating effects of the harbor, lying snow happens rather seldom in the city. There are 204 “rainy” days every year on average (more than 0.2 millimetres (0.0079 in) of rainfall), with 73 days having “heavy rain” (more than 5 millimetres (0.20 in)). Cork is also a foggy city, with an average of 97 days of fog each year, with fog being most prevalent in the mornings and throughout the winter. Despite this, Cork is one of Ireland’s sunniest cities, with an average of 3.9 hours of sunlight per day and just 67 days with no “recordable sunshine,” most of which occur during and around winter.

Cork’s retail sector consists of a combination of contemporary, state-of-the-art shopping malls and family-owned small stores. Department stores cater to all budgets, with high-end boutiques on one end of the market and low-cost retailers on the other. Many Cork suburbs have shopping centers, including Blackpool, Ballincollig, Douglas, Ballyvolane, Wilton, and Mahon Point. Others may be found in the city center. These include the recently finished building of two big malls, The Cornmarket Centre on Cornmarket Street and “Opera Lane” off St. Patrick’s Street/Academy Street. The Grand Parade project, on the site of the old Capitol Cineplex, was authorized for 60,000 square feet (5,600 m2) of retail space, with construction set to begin in 2016. St. Patrick’s Street is Cork’s principal retail street and, behind Dublin’s Grafton Street, the most expensive street in the nation per square metre. This region has been damaged by the post-2008 slump, with several shop premises available for rent as of 2015. Oliver Plunkett St. and Grand Parade are two further retail streets in the city center. Cork is also home to some of the country’s finest department stores, with the city laying the groundwork for retailers such as Dunnes Stores and the defunct Roches Stores. Mahon Point Shopping Centre is located just outside of the city center.

Cork City is the industrial hub of Ireland’s south. Its primary business is pharmaceuticals, with Pfizer Inc. and the Swiss corporation Novartis being major employers. Viagra is the most well-known product of the Cork pharmaceutical industry. Cork is also Apple Inc.’s European headquarters, with over 3,000 employees working in production, R&D, and customer care. Logitech and EMC Corporation are two more major IT employers in the region. Three hospitals are also among the city’s top 10 employers.

The city is also home to the Heineken Brewery, which produces Murphy’s Irish Stout, as well as the neighboring Beamish & Crawford brewery (which was purchased by Heineken in 2008). The city’s Ferrero plant produces 45 percent of the world’s Tic Tac sweets. For many years, Cork was home to Ford Motor Company, which produced automobiles in the docklands region till closing in 1984. Henry Ford’s grandfather was from West Cork, which was one of the primary motivations for establishing the Cork manufacturing site. However, technology has supplanted the traditional industrial firms of the 1970s and 1980s, with people now working in the city’s various I.T. centers – including Amazon.com, the online retailer, which has set up shop at Cork Airport Business Park.