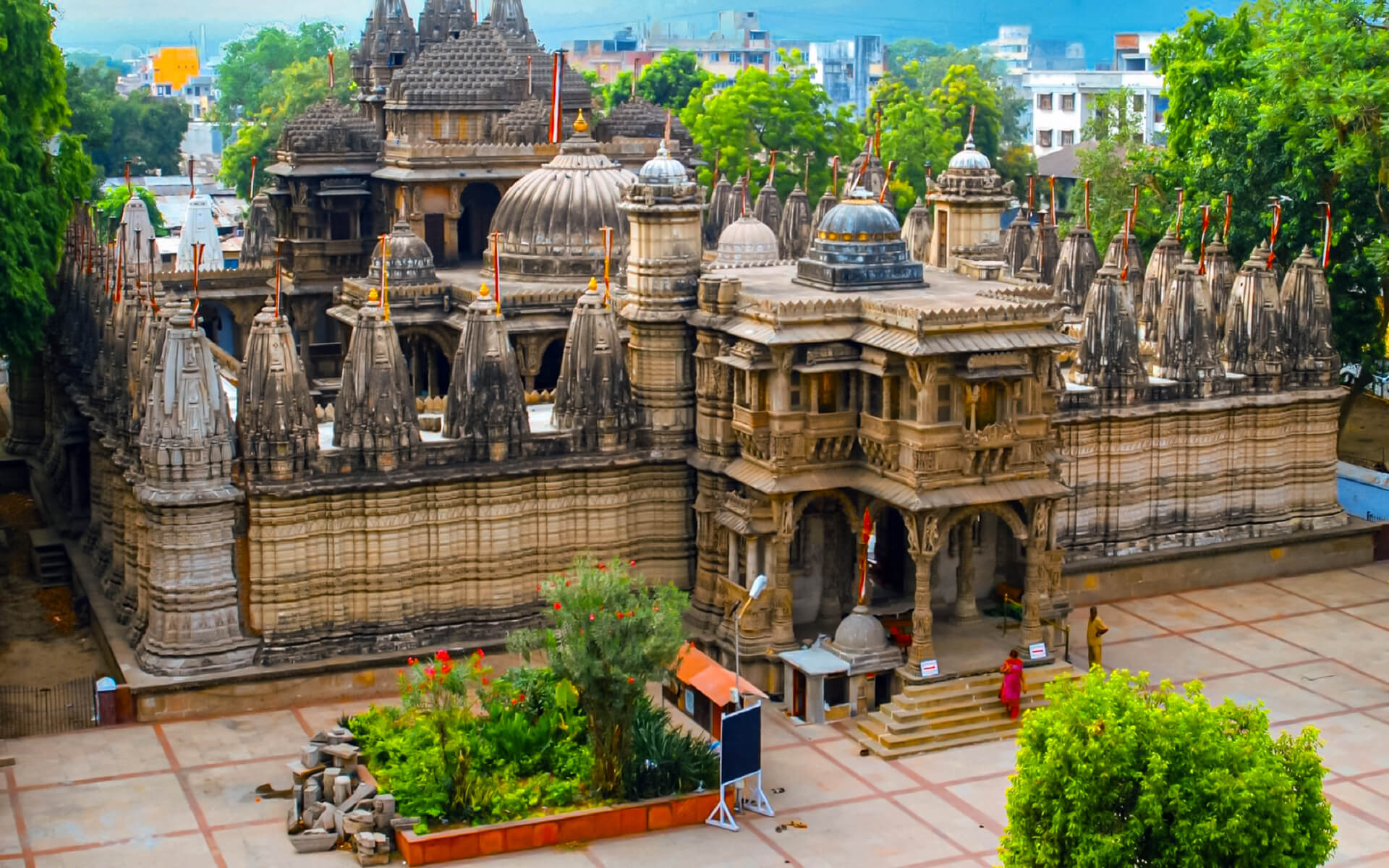 Ahmedabad is Gujarat’s biggest city and former capital. It is the administrative center of the Ahmedabad district as well as the location of the Gujarat High Court. It is India’s sixth biggest city and seventh largest metropolitan region, with a population of more than 6.3 million and an extended population of 7.2 million. Ahmedabad is situated on the banks of the Sabarmati River, 30 kilometers (19 miles) from Gandhinagar, the state capital.

Ahmedabad has grown as a vital commercial and industrial center in India. It is India’s second biggest cotton grower, and its stock market is the country’s second oldest. Cricket is a prominent sport in Ahmedabad, which is home to the Sardar Patel Stadium, which seats 54,000 people. The consequences of India’s economic liberalization have shifted the city’s economy toward tertiary sector activities like as commerce, communication, and construction. Ahmedabad’s growing population has boosted the building and housing sectors, culminating in the recent rise of skyscrapers.

It was named third on Forbes’ list of the fastest developing cities of the decade in 2010. The Times of India named Ahmedabad the greatest city in India to live in in 2012. Ahmedabad’s estimated gross domestic output in 2014 was $119 billion.

Ahmedabad has been chosen as one of 100 Indian towns to be transformed into smart cities as part of Prime Minister Narendra Modi’s flagship Smart Cities Mission.

Ahmedabad, India’s sixth biggest city, with a population of 6.5 million people. Although it is the commercial center of one of India’s most rich states, Gujarat, it is not the state capital, which is located 30 kilometers to the north in Gandhinagar.

Ahmedabad exemplifies both a materialistic mindset and a spirituality of self-renunciation. Ahmedabad, India’s fastest developing city, is a center for information technology, education, and industry. The city’s historical sites include Bhadra Fort, Shaking Minarets, and Teen Darwaza. Kankaria Lake and Vastrapur Lake are two spots where you may enjoy the beauty of nature. If you wish to experience the colorful side of this region, go during one of Ahmedabad’s big festivals: Uttarayan and Navratri are two of the most well-known festivals, which are celebrated with tremendous fervor and gusto. The winter season is regarded as the most ideal time to visit the city.

The Stepwell at Adalaj and the Rani Mosques are two of Ahmedabad’s ornately carved medieval structures (dedicated to Rani Sipri and Rani Rupmati). It also has a plethora of outstanding museums and art galleries. Modern office buildings and shopping malls dot the newly constructed neighborhoods.

Gujaratis are also well-known for their hospitality and tourism in the state.

Summer begins in mid-March and lasts until mid-June. On a hot, bright day in May, the temperature would be 34-44°C (93-111°F). It is not recommended to come during the summer. When the monsoon arrives in mid-June, the city transforms into a wonderful place. You’ll be able to sample the city’s many monsoon specialties, such as boiled or roasted corn meals on roadside kiosks, as well as other unique local cuisine. During this season, there are also certain well-known Hindu holidays, such as Rakshabandhan (or Rakhi) and Janmastami – the birth date of Lord Krishna. Floods may occur at any moment. Winter is the ideal time to visit the city since the average temperature is 5-20°C (41-68°F).

Ahmedabad is located in western India at 23.03°N 72.58°E, 53 metres (174 ft) above sea level on the banks of the Sabarmati river in north-central Gujarat. It has a total size of 464 km2 (179 sq mi). In the summer, the Sabarmati regularly dried up, leaving just a little trickle of water, and the city is located in a sandy and arid environment. However, with the completion of the Sabarmati River Front Project and Embankment, the waters of the Narmada River have been channeled to the Sabarmati, allowing the river to flow all year, hence alleviating Ahmedabad’s water woes. The continuous growth of the Rann of Kutch threatens to exacerbate desertification in the city region and across the state; however, the Narmada Canal network is projected to ameliorate this issue. The city is relatively level, with the exception of the minor hills of Thaltej-Jodhpur Tekra. Within the municipal borders, there are three lakes: Kankaria, Vastrapur, and Chandola. Kankaria, located near Maninagar, is an artificial lake built in 1451 by the Sultan of Delhi, Qutb-ud-din Aybak.

The town is classified as seismic zone 3 on a scale of 2 to 5, according to the Bureau of Indian Standards (in order of increasing vulnerability to earthquakes).

The Sabarmati divides Ahmedabad into two physically separate eastern and western areas. The historic city, which contains the major town of Bhadra, is located on the river’s eastern bank. This area of Ahmedabad is distinguished by densely packed bazaars, a pol system of tightly crowded buildings, and a plethora of places of worship. It contains the major railway station, the main post office, and various Muzaffarid and British-era structures. During the colonial time, the city expanded to the western bank of Sabarmati, aided by the building of Ellis Bridge in 1875 and, subsequently, the comparatively contemporary Nehru Bridge. The western section of the city is home to educational institutions, contemporary structures, residential neighborhoods, retail malls, multiplexes, and new commercial districts centered on routes like Ashram Road, C. G. Road, and Sarkhej-Gandhinagar Highway.

Ahmedabad’s gross domestic output was predicted to be US$119 billion in 2011. As of June 2012, the RBI classified Ahmedabad as the seventh biggest deposit and credit center in the country. The textile and garment industries attracted significant capital investment in the nineteenth century. Ranchhodlal Chhotalal established the first Indian textile factory, the Ahmedabad Spinning and Weaving Company Limited, on 30 May 1861, followed by the development of a succession of textile factories such as the Calico Mills, Bagicha Mills, and Arvind Mills. By 1905, the city had around 33 textile mills. During World War I, the textile sector flourished fast and profited from the impact of Mahatma Gandhi’s Swadeshi movement, which encouraged the purchasing of Indian-made products. For its textile industry, Ahmedabad was known as the “Manchester of the East.” The city is India’s top supplier of denim and one among the country’s major exporters of gemstones and jewelry. The car sector is also vital to the city; after Tata’s Nano project, Ford and Suzuki are intending to create facilities near Ahmedabad, and the Peugeot groundbreaking ceremony has already taken place.

The Ahmedabad Stock Market, situated in the city’s Ambavadi district, is the country’s second oldest stock exchange. The city is home to two of India’s largest pharmaceutical businesses, Zydus Cadila and Torrent Pharmaceuticals. The city is home to the corporate headquarters of the Nirma group of businesses, which operates a significant number of detergent and chemical industrial plants. The Adani Group, a worldwide trade and infrastructure development firm, also has its headquarters in the city. The Sardar Sarovar Project of dams and canals has increased the city’s supply of drinkable water and energy. Ahmedabad’s information technology sector has grown dramatically, with corporations like as Tata Consultancy Services constructing operations there. Cyberoam, India’s premier cyber-security organization, also maintains an R&D center in Ahmedabad. In a 2002 NASSCOM assessment of the “Super Nine Indian Destinations” for IT-enabled services, Ahmedabad was placed fifth out of the top nine most competitive cities in the country. Students and young skilled employees from the rest of India have been drawn to the city’s educational and industrial establishments. Other notable Indian corporations based in Ahmedabad include Rasna, Wagh Bakri, Nirma, Cadila Pharmaceuticals, and Intas Biopharmaceuticals. Ahmedabad is India’s second biggest cotton textile center, behind Mumbai, and Gujarat’s largest. There are now several cotton production plants in and around Ahmedabad. Textiles are one of the city’s key industries. Gujarat Industrial Development Corporation has purchased land in Ahmedabad’s Sanand taluka for the development of three new industrial parks.

India’s international dialing code is +91. The area code for the region is 79. As a result, +91 79 must be prefixed to any phone number.

Foreign people must produce a photocopy of their passport, an Indian visa page, a passport-sized picture, and evidence of residency in India to purchase a SIM card.