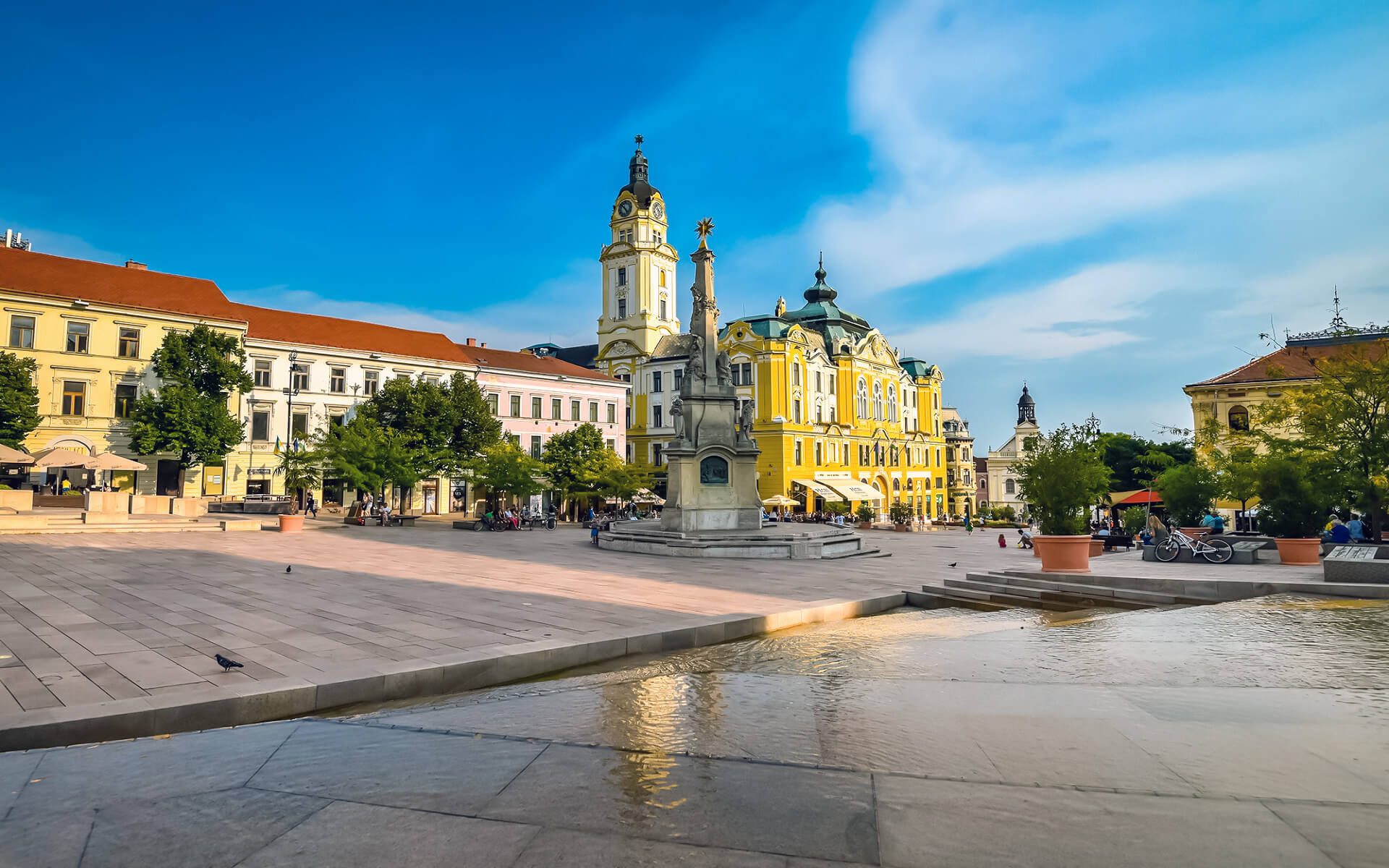 Pécs is Hungary’s fifth biggest city, situated on the slopes of the Mecsek mountains in the country’s south-west, close to the border with Croatia. It serves as the administrative and economic hub of Baranya County. Pécs is also the seat of the Pécs Roman Catholic Diocese.

The city of Sopianae was constructed by Romans in the early second century in an area inhabited by Celts and Pannoni tribes. By the fourth century, it had grown to become the capital of Valeria province and an important early Christian settlement. This period is represented by the early Christian necropolis, which was designated a UNESCO World Heritage Site in December 2000.

Steven I established its episcopate in 1009, and Louis I the Great established Hungary’s first university at Pécs in 1367. (The biggest university, with over 34,000 students, is still located in Pécs.) Bishop Janus Pannonius, a brilliant humanist poet, transformed Pécs into one of the country’s culture and artistic centers. Pécs has a significant history from the 150-year-long Ottoman rule, such as the Pasha Qasim the Victorious Mosque on Széchenyi Square.

Pécs has always been a heterogeneous city with numerous cultural layers coated with distinct ideals from its two thousand year history. Hungarians, Croats, and Swabians coexist peacefully despite economic and cultural polarization. In 1998, Pécs was awarded the UNESCO Prize Cities for Peace for preserving minorities’ traditions, as well as for its tolerant and helpful attitude toward refugees fleeing the Balkan Wars. In 2007, Pécs was ranked third, while in 2008, it was ranked second in the category of cities with 75,000 to 200,000 people (The LivCom Awards).

Pécs was chosen as the European Capital of Culture in 2010, sharing the honor with Essen and Istanbul. “The Borderless City” is the city’s slogan. After acquiring the title, a period of considerable renovation began in the city. Renewed public spaces, streets, squares, and neighborhoods were planned, as well as new cultural centers, a music theater, a new library and center, and a cultural district.

Pécs (PEH-ch) is a town in Hungary’s southwest. Pécs is the administrative and economic center of the county of Baranya. The city has a Mediterranean feel to it and is a treasure trove of science, arts, and sacrality. It has well-known and beautiful eras. Several Roman, Middle Ages, Turkish occupancy, and middle-class development values are erected on top of or close to one another, such as Gothic, Renaissance, and Baroque dwelling houses, Christian churches and Islamic places of worship, djamis and minarets, baths, and public structures.

Pécs is situated in Central Europe, in the Carpathian Basin, in a southern Hungarian county, and is the administrative headquarters of Baranya. It is bounded on the north by Mecsek and on the south by a plain. Pécs has a long mining history. Mecsek dolomitic water is well-known for its high mineral density at steady poise.

Pécs is a city in Hungary near the Croatian border. Its southern portion is quite flat, while its northern portion lies on the slope of the Mecsek mountain. It has a very pleasant temperature since it is located on the outskirts of a still-thriving wooded region. During the hot summer evenings, Mecsek’s chilly air rushes down to clear the city’s air.

Pécs is accessible from the south. Mecsek rises 400–600 meters above the 120–130-meter-high Pécsi plain. Jakab-hill is 592 meters high in western Mecsek, Tubes is 612 meters high just above Pécs, and Misina is 535 meters high. Higher portions of the city, namely Pécsbánya, Szabolcsfalu, Vasas, and Somogy, rise to 200–250 m. Graveyards had retreated to a relatively restricted region. Wooded regions often begin at a height of roughly 300 m. Mecsek is separated into various valleys, which play an important role in improving the city’s climate in the absence of lakes and rivers. Waters flowing down from Mecsek are collected by Pécsi Water and channeled beneath the east-west rail route, finally reaching the Danube.

Pécs, being in the heart of an agricultural region, is a natural center for local goods. It had a coal mine and even a Uranium mine till a few years ago. Several factories survive, although many struggled to adapt following the collapse of the Iron Curtain. The city’s contemporary high-tech economy is gradually developing, with Elcoteq, a Finnish electronics manufacturing business, being the city’s biggest industrial employment. Pécs is home to a nationally (and, to a lesser degree, globally) renowned porcelain factory. The Zsolnay Porcelain has a unique ridecent finish known as “eozin.” Zsolnay Porcelain tiles cover one of the walls of a local McDonald’s restaurant (on Main Square) (as well as the walls and roofs of several public buildings). The Pécsi Sörfzde (Pécs Brewery) is one of Hungary’s four major breweries, producing a unique beer that is not strained before bottling. Pécs is also well-known for its leather industry.

Broadband Internet connection is widely available. It is common to locate free Internet connection (wifi) in downtown areas. Customers may use free wifi at most cafés and bars. Look for “wifi” signage; you may have to ask for the password, but if you consume, it will be readily supplied.

Doha is the capital and largest city of the state of Qatar. Doha has a population of 956,460 people living in the city limits. The...
Read more

Barcelona is the capital city of Catalonia in the Kingdom of Spain, as well as the country’s second most populated municipality, with a population...
Read more

Koper is a city in southern Slovenia, along with the other Slovenian coastal towns of Ankaran, Izola, Piran, and Portorož, on the country’s 47-kilometer...
Read more

Sapporo is the fourth most populous city in Japan and the major city on the northern Japanese island of Hokkaido. It is the capital...
Read more