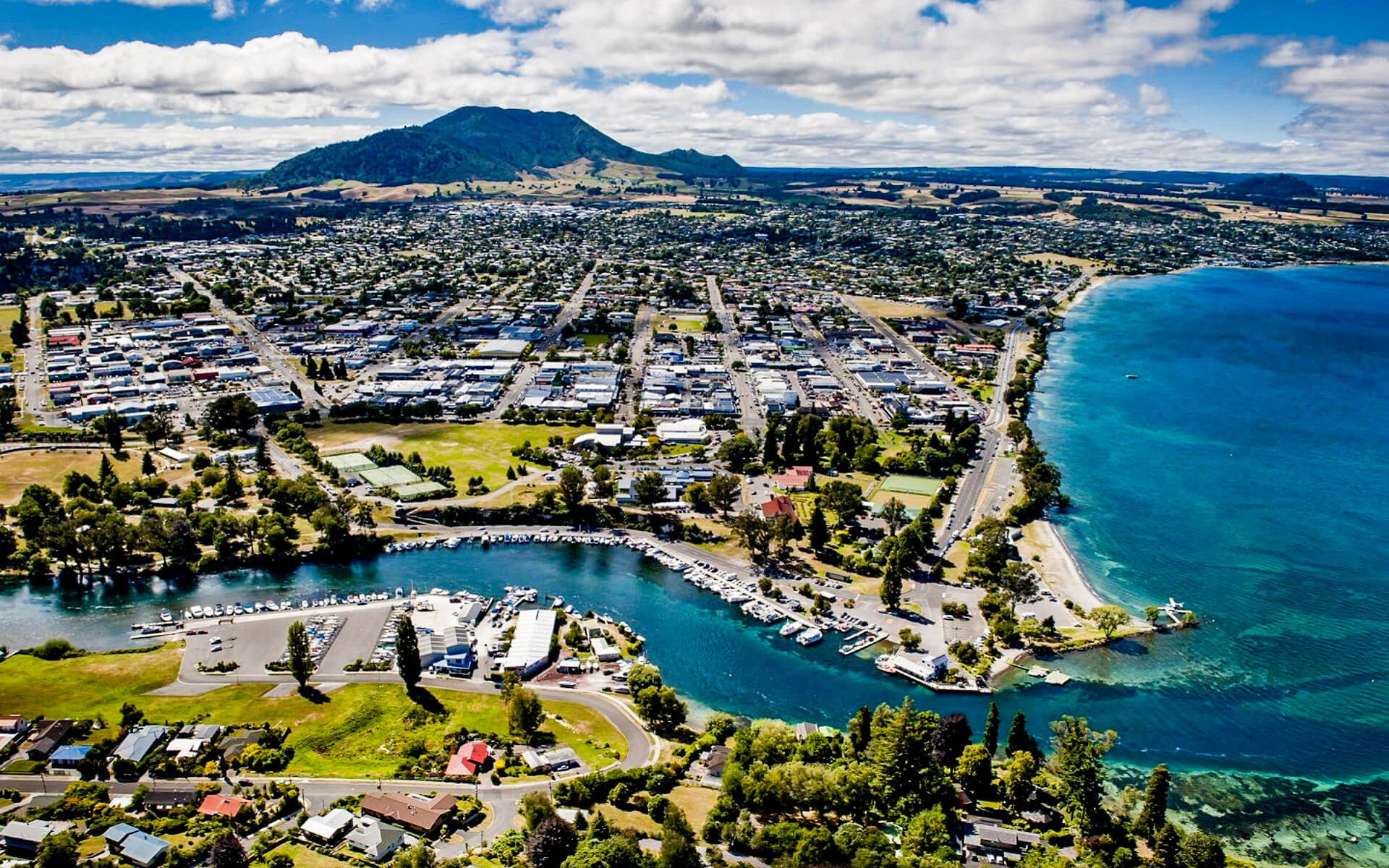 Taupo is a town in the heart of New Zealand’s North Island, on the shores of Lake Taupo. It is the administrative center of the Taupo District Council and is located in the southern Waikato Region.

Taupo’s population is 23,700 people (June 2015 estimate). Taupo was originally established as a borough in 1953, but since 1989 it has been governed by the Taupo District Council, which encompasses both Taupo and the surrounding hinterland. Regardless, it is sometimes referred to as a city. It is New Zealand’s 20th biggest urban area and the second-largest in the Waikato Region (behind Hamilton).

The popular name for the town is Taupo, which is an abbreviated form of its full name, Taupo-nui-a-Tia. Taup-nui-a-Tiameans “the huge cloak of Tia” in Mori, where Tia is the name of the lake’s discoverer.

Taupo is a town in New Zealand’s central North Island on the northern bank of Lake Taupo, the country’s biggest lake. It is designed to be constructed around the lake’s exit into the Waikato River, the country’s longest river.

It is a popular tourist destination because of the lake, boating, trout fishing, geothermal sights, waterfalls, outdoor sports, and closeness to the highest mountains on the North Island.

The Lake Taupo region is built on a volcanic plateau. The lake, which is famous for its trout fishing and boating, fills the caldera of one of the world’s greatest super-volcanoes, in a still active geological zone. Around 26,000 years ago, the lake region was a volcano that erupted in a massive explosion, ejecting around 800 cubic kilometers of debris and spreading it throughout the central North Island, establishing the Volcanic Plateau. After filling with water from the surrounding hills, the resultant depression formed Lake Taupo. It last exploded over 1,800 years ago, painting the sky above China and Rome crimson.

When compared to other sections of the North Island, Taupo has a chilly and windy climate. This is because the town is situated inland, resulting in the buildup of dry air, which causes severe frost throughout the winter. Snowfall in Taupo, on the other hand, is uncommon. Taupo’s summer climate is warm, with highest average temperatures reaching 23 degrees and lowest average temperatures reaching 10 degrees.

Taupo is situated in the northeast corner of Lake Taupo, New Zealand’s biggest lake, where it empties into the Waikato River. The river passes through the beautiful Huka Falls, which are located a short distance north of town. Taupo is a center of volcanic and geothermal activity, and various hot springs suited for swimming may be found nearby. Mount Tauhara is six kilometers (4 miles) to the east.

Significant hot springs may be found to the northeast. Extremophile microorganisms that thrive in very hot conditions may be found in these springs.

Taupo is located on a section of State Highway 1 that runs parallel to State Highway 5. It is located 53 kilometers north of Turangi. It is one of the few New Zealand centres that has never been connected to the rail network.

Kinloch, a tiny but rising satellite town with a Jack Nicklaus-designed golf course, lies 20 kilometers west along the lake.

Taupo is a popular tourist destination, especially in the summer, since it provides panoramic views of Lake Taupo and the volcanic highlands of Tongariro National Park to the south. It provides a variety of tourist activities such as skydiving, jet boating, and paragliding.

Taupo serves a variety of nearby plantation pine woods, including the world’s biggest man-made forest, as well as allied businesses. On Centennial Drive, about 3 kilometers north-east of town, is a big sawmill.

Internet cafés and wireless hotspots are accessible throughout the city center, as well as hotels, restaurants, pubs, and clubs, making it quick and easy to connect to the Internet.