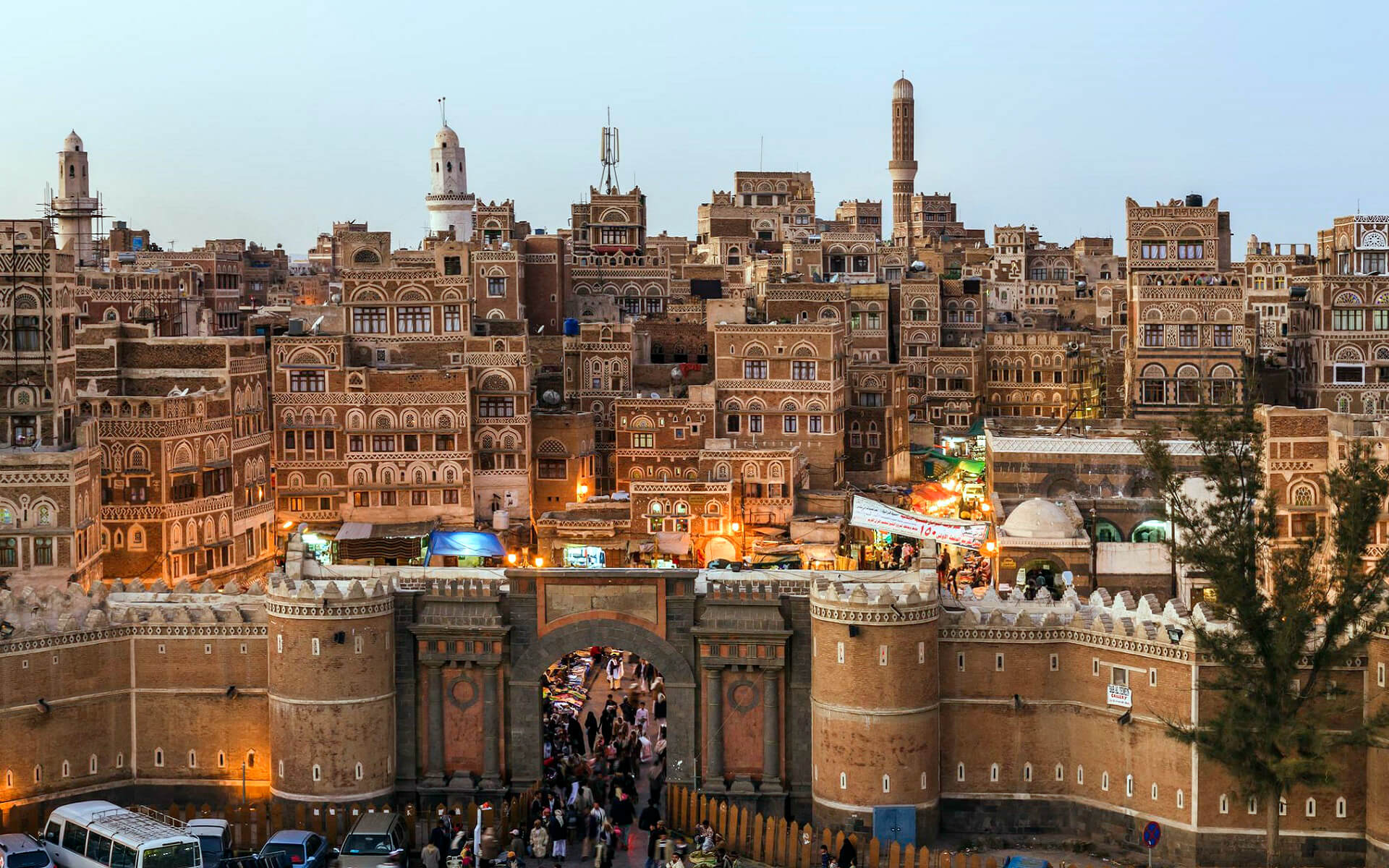 Sana’a is Yemen’s capital, nestled in the Yemeni Mountains, and is usually the first stop for visitors to the country.

According to the Yemeni constitution, Sana’a is the country’s capital, but the seat of the internationally recognized government was relocated to Aden in the wake of the 2014–15 Yemeni coup d’état. President Abd Rabbuh Mansur Hadi proclaimed Aden the temporary capital in March 2015.

Sana’a, one of the world’s oldest continually inhabited cities (the others being Jericho, Damascus, and Aleppo), is claimed to have been created by Shem, Noah’s son. As a consequence, the city has earned the unusual moniker “Sam City.”

Sana’a will start surprise you as soon as you step out of the airport. The jambiya, a distinctive Yemeni dagger, is worn by all police officers and citizens. Even little infants are adorned with daggers. Because of consuming qat leaves, everyone gets a swelled cheek. Because of the consistently painted windows and walls, all buildings outside the airport seem the same.

The historic fortified city has been inhabited for over 2,500 years and is home to numerous surviving architectural masterpieces. The United Nations designated it a World Heritage Site in 1986. Efforts are being made to preserve some of the oldest structures, like the Samsarh and the Great Mosque of Sana’a, which are over 1,400 years old. The old city is surrounded by historic clay walls that reach 9–14 metres (30–46 ft) high and has more than 100 mosques, 12 hammams (baths), and 6,500 dwellings. Many of the homes are many floors tall and have flat roofs, like antique skyscrapers. They have complex friezes, beautifully carved frames, and stained-glass windows.

Suq al-Milh (Salt Market), one of the most famous attractions, sells salt as well as bread, spices, raisins, cotton, copper, ceramics, silverware, and antiquities. The 7th-century Jami’ al-Kabir (Great Mosque) is one of the world’s oldest mosques. The Bb al-Yaman (Yemen Gate) is a well-known access point into the city walls that dates back over 1,000 years.

Al Madina is a business district in the ancient city that is quickly developing. There are various boutiques and restaurants in addition to three huge hotels. There are three parks in the neighborhood, as well as the President’s mansion.

Sana’a has a fairly moderate desert environment, which is quite unique.

Sana’a receives roughly 200 mm of precipitation per year on average.

However, because of its high height, temperatures are far more temperate than in many other Arabian Peninsula towns. In actuality, average temperatures in Sana’a stay pretty stable throughout the year, with January being the coldest month and July being the hottest.

The city is seldom subjected to excessive heat or cold. During the winter, however, temperatures in certain regions of the city may drop to approximately 15 °F or 20 °F (9 °C or 7 °C). Frost is common in the early winter mornings, and there is a minor wind chill in the city at higher elevations, making the frigid mornings very harsh, with low humidity. During the day, the sun heats the city to the upper 60s °F (15-20 °C) and low 70s °F (21-26 °C), however the temperature drops dramatically when night falls.

Because to its position in the Sana’a basin and varying altitudes around the city, the city has several microclimates that vary from district to district.

Summers are hot and may cool off quickly at night, particularly after rain. During the months of July and August, Sana’a gets half of its yearly rainfall.

Sana’a had a mining industry in the past. Onyx, chalcedony, and cornelian were mined in the hills around Sana’a. The city was also famed for its metalwork, which the British regarded as “famous” in the early twentieth century but has since fallen out of favor. The British characterized Sana’a in 1920 as “fully stocked with fruit and grapes, and has excellent water.”

Sana’a, Yemen’s capital city, has 40% of its employment in the public sector. Trade and manufacturing are two other major sources of formal employment in the city. Sana’a, like many other developing-world cities, has a sizable informal sector, which is estimated to account for 32% of nongovernmental employment. However, although there are more jobs in Sana’a than in other cities in Yemen, there is also more poverty and unemployment. It is estimated that 25% of Sana’a’s work force is jobless.