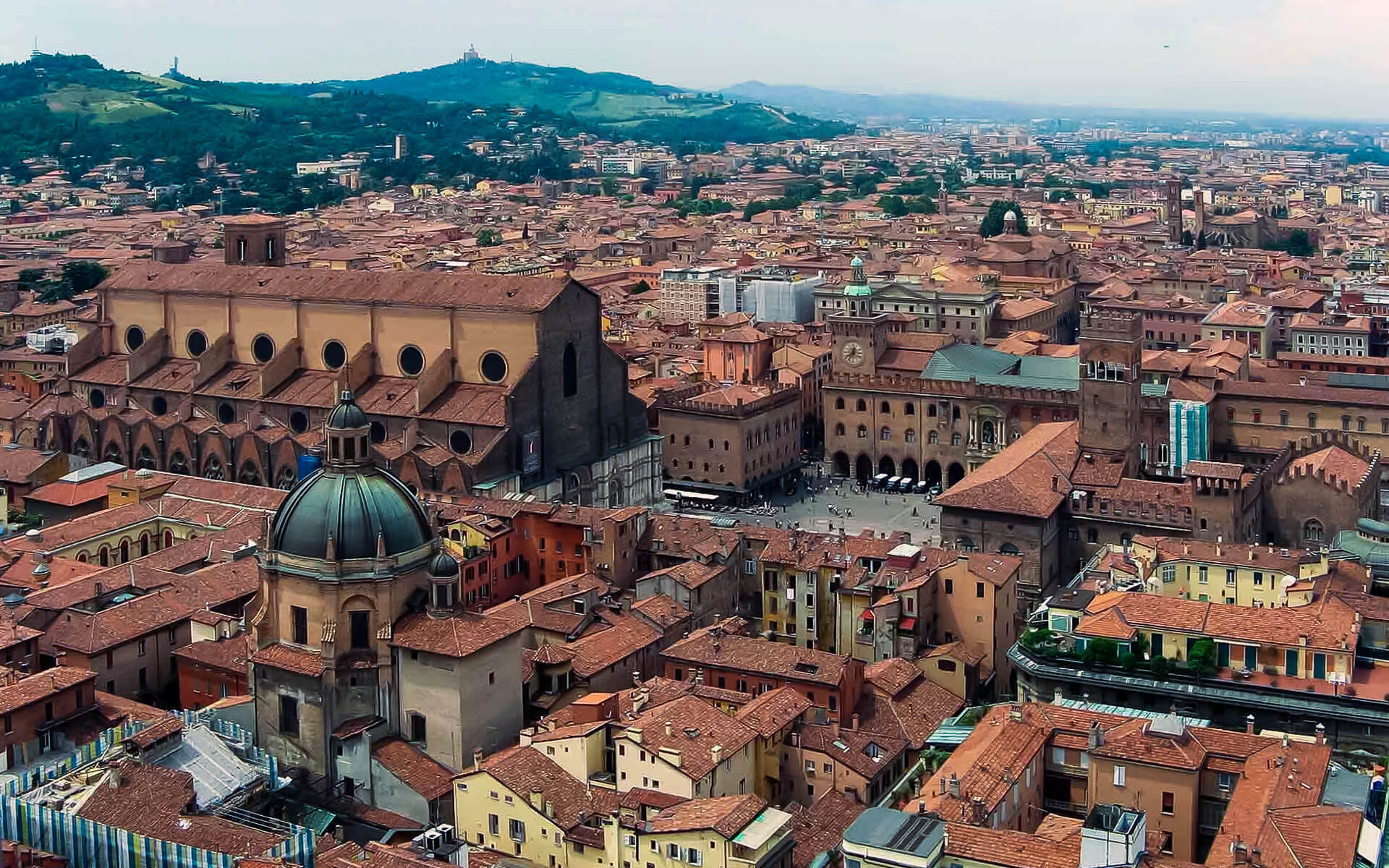 Bologna is the biggest city (and capital) in Italy’s Emilia-Romagna Region. It is the seventh most populous city in Italy, lying in the centre of a one-million-person metropolitan region (legally recognized by the Italian government as a città metropolitana).

The earliest villages were constructed about 1000 BC. The city was an urban center under the Etruscans (Velzna/Felsina) and the Celts (Bona), then the Romans (Bononia), and again in the Middle Ages as a free municipality (for one century it was the fifth largest European city based on population). Bologna is home to the world’s oldest university, the University of Bologna, which was established in 1088. Thousands of students enhance the city’s social and cultural life. Bologna, famous for its towers and long porticoes, has a well-preserved historical center (one of the largest in Italy) thanks to a careful restoration and conservation policy that began at the end of the 1970s, on the heels of serious damage caused by urban demolition at the end of the 19th century as well as wars.

An important cultural and artistic center, its significance in terms of landmarks can be attributed to a diverse mixture of monuments and architectural examples (medieval towers, antique buildings, churches, the layout of its historical center) as well as works of art resulting from a first-rate architectural and artistic history. Bologna is also a major transportation crossroads for Northern Italy’s roads and railroads, and it is home to numerous key mechanical, electrical, and nutritional businesses. According to the most current statistics from the European Regional Economic Growth Index (E-REGI) of 2009, Bologna ranks first in Italy and 47th in Europe in terms of economic growth rate.

Bologna is home to a number of prominent artistic, economic, and political institutions, as well as one of Europe’s most stunning trade fair areas. In 2000, it was named European Capital of Culture, and in 2006, it was designated a UNESCO “city of music.” Bologna, along with 45 other towns from across the globe, was chosen to participate in the Universal Exposition of Shanghai 2010. Bologna is also one of the richest cities in Italy, often rating as one of the top cities in the nation in terms of quality of life: in 2011, it rated first out of 107 Italian cities.

Bologna is well-known for its food (la cucina Bolognese). It is also regarded as a progressive and well-managed city. Many Italians regard it as second only to Venice in terms of beauty, and it undoubtedly possesses one of the biggest and best maintained ancient cores among Italian cities. Its architecture is notable for its use of terracotta reds, burnt oranges, and bright yellows, giving rise to the epithet “Bologna la rossa” (Bologna the red). The vast town center, which is distinguished by kilometers of elegant covered walkways known as “porticos,” is one of Europe’s best-preserved.

Bologna is home to the continent’s oldest university, which was established in 1088. A significant proportion of its population is made up of out-of-town university students. Like other Italian university towns, it is disfigured in areas by extensive graffiti on its old buildings.

Until the late nineteenth century, when a large-scale urban renewal project was undertaken, Bologna was one of Europe’s few remaining large walled cities; to this day, and despite suffering significant bombing damage in 1944, Bologna’s 350 acres (141.64 ha) historic center is Europe’s second largest, containing an immense wealth of important medieval, renaissance, and baroque artistic monuments.

Bologna developed as an Etruscan and subsequently Roman colony along the Via Emilia; the Via Emilia still runs straight through the city under many names such as Strada Maggiore, Rizzoli, Ugo Bassi, and San Felice. Because of its Roman past, the principal streets of Bologna, which are now mostly pedestrianized, adhere to the grid design of the Roman town. The ancient Roman walls were replaced by a high medieval system of fortifications, the vestiges of which may still be seen today, and then by a third and final set of ramparts erected in the 13th century, many elements of which still exist today. Out of up to 180 medieval defense towers erected in the 12th and 13th centuries before the establishment of consolidated urban authority, just around twenty survive. The most renowned of Bologna’s towers are the central “Due Torri” (Asinelli and Garisenda), whose unique leaning shapes have become a beloved emblem of the city.

The cityscape is further enhanced by the city’s famed exquisite and wide porticoes. In all, there are over 38 kilometers (24 miles) of porticoes in the city’s ancient center (about 45 kilometers (28 miles) in the city proper), allowing you to wander for great distances while being protected from the weather.

The Portico di San Luca is arguably the longest in the world. It connects Porta Saragozza (one of the twelve gates of the ancient Middle Ages walls that encircled a 7.5 km (4.7 mi) section of the city) with the Sanctuary of the Madonna di San Luca, a church begun in 1723 on the site of an 11th-century edifice that had already been enlarged in the 14th century, prominently located on a hill (289 metres (948 feet)) overlooking the town and one of Bologna’s The meandering 666 vault arcade, over four kilometers (3,796 m) long, successfully connects San Luca, as the church is generally known, to the town center. Its porticos shelter the customary procession, which has brought a Byzantine image of the Madonna and Child ascribed to Luke the Evangelist down to the Bologna Cathedral every year since 1433 during Ascension week.

Annual precipitation ranges between 450 mm (18 in) to 900 mm (35 in), with the bulk falling in the spring and autumn. Snow and significant snowfalls occur on occasion throughout the winter; the most recent big occurrence occurred in February 2012, when about a meter of snow fell on the city.

Bologna is at its finest from March/April to October, when it is nice and there is a lot of outside drinking and eating or just relaxing in squares like Piazza Santo Stefano and Piazza Maggiore. However, it may become quite hot and muggy in July and August. Many businesses and restaurants are closed in August, as is the situation across most of Italy throughout the summer.

Winter might be very cold, but Bologna is especially lovely in the two weeks before Christmas. Cloudless blue skies are common in January and February, but the clear weather is frequently the coldest: bring a coat, scarf, cap, and gloves.

Bologna is located at the confluence of the Reno and Savena river basins on the border of the Po Plain, at the foot of the Apennine Mountains. Because Bologna’s two major watercourses go straight to the sea, the city is located outside of the River Po’s drainage basin. The Province of Bologna spans from the western tip of the Po Plain to the Tuscan-Emilian Apennines on the border with Ferrara. The town center is 54 meters (177 feet) above sea level, although elevation within the municipality varies from 29 meters (95 feet) in Corticella to 300 meters (980 feet) in Sabbiuno and the Colle della Guardia. The Province of Bologna runs from the Po Plain into the Apennines; the province’s highest point is the summit of Corno alle Scale (near Lizzano in Belvedere), which rises 1,945 metres (6,381 ft) above sea level.

Bologna is a major railway and highway hub in Italy. Bologna’s economy is distinguished by a thriving industrial sector, which has historically been built on the transformation of agricultural and zootechnical goods (Granarolo, Segafredo Zanetti). It also has a substantial financial, insurance (Unipol), and retail (Coop Italia, Conad) activity, as well as machinery (Coesia), vehicles, footwear, textile, engineering, chemical, printing, and publishing sectors. The city’s Fiera District (exhibition center) is one of the biggest in Europe, hosting major annual international expos in the car sector (Bologna Motor Show), ceramics for the construction industry (International Exhibition of Ceramic Tiles and Bathroom Furnishings), and food industry. Furthermore, several important firms in the fields of automobiles (Lamborghini), motorcycles (Ducati), mechanics, food, tobacco, and electronics, as well as important retail and wholesale trade (the “Centergross” in Argelato, established in 1973), and one of the largest Italian food processing companies, have their headquarters in the Bologna urban area (Conserve Italia).

Irkutsk is a city in Russia and the administrative headquarters of Irkutsk Oblast. It is one of the major cities in Siberia. Irkutsk was established...
Read more
Uncategorized

Turku is a city on Finland’s southwest coast, near the mouth of the Aura River, in the Southwest Finland area. Turku as a town...
Read more

Vilnius, Lithuania’s capital and biggest city, with a population of 542,664. Vilnius is the second biggest city in the Baltic republics and is situated...
Read more

Egypt conquered the lands of current South Sudan and the Republic of Sudan under the Muhammad Ali Dynasty, and the areas were afterwards administered...
Read more
Winter destinations