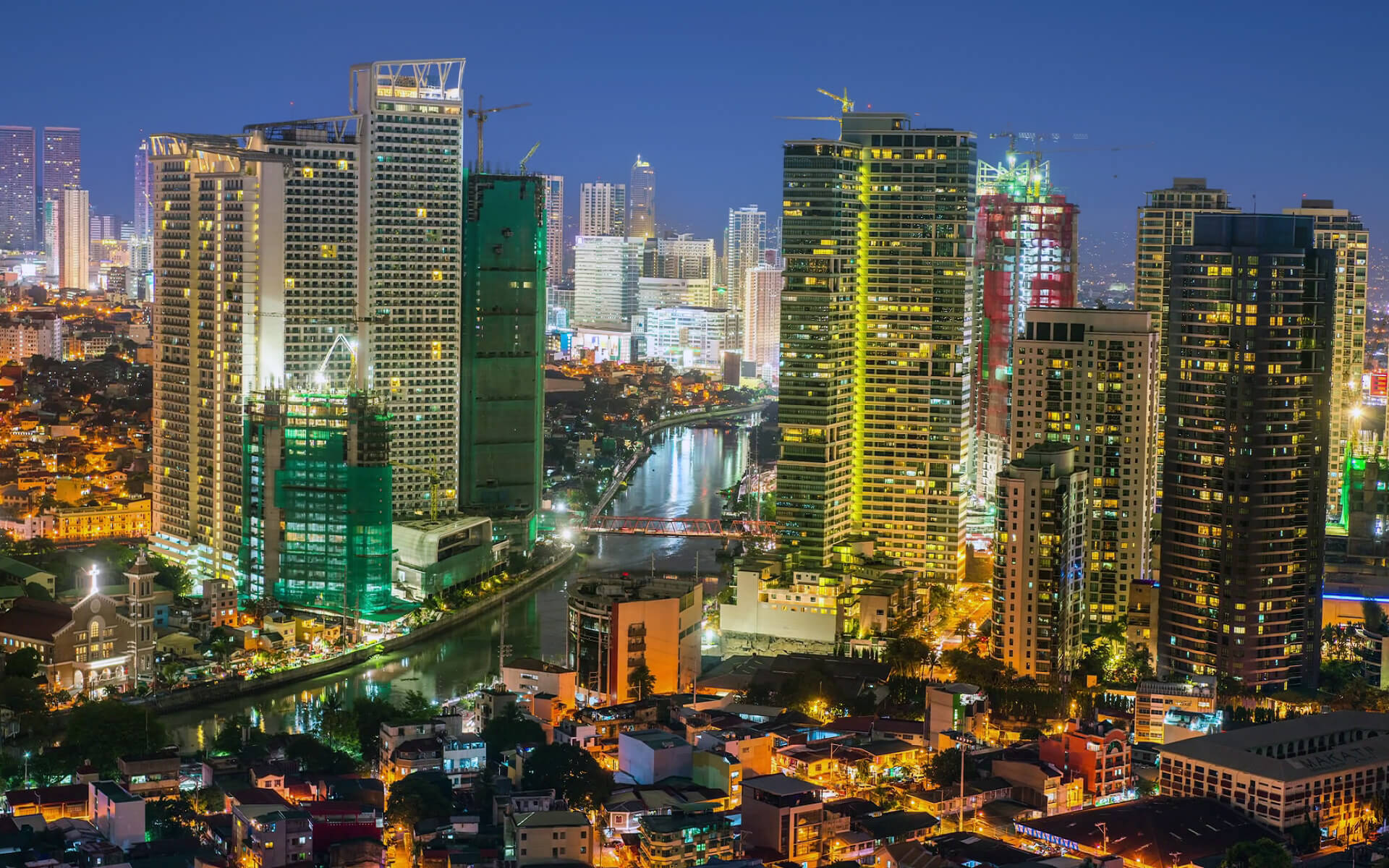 Makati, formally the City of Makati (Filipino: Lungsod ng Makati), is one of the sixteen cities that comprise Metro Manila in the Philippines. Makati is situated in the middle of Metro Manila, inside the circle of 14′40′′ °north and 121′3′′ °E.

Makati is the Philippines’ financial capital, with the biggest concentration of global and local firms in the country. Makati is home to major banks, enterprises, retail shops, and foreign embassies. The Philippine Stock Exchange’s largest trading floor is located on Ayala Avenue in the city. Makati is also well-known as a major cultural and entertainment center in Metro Manila.

Makati is the 17th-largest city in the Philippines, with a population of 582,602, and the 41st most densely populated city in the world, with 19,336 residents per square kilometer. Despite having a population of just half a million, the city’s daytime population is believed to be more than one million on a normal working day due to the enormous number of people that come to the city to work, shop, and conduct business.

Makati City, or simply Makati, is located in the core of Manila’s large metropolitan area. The city is recognized for its upmarket shopping malls, as well as high fashion labels, restaurants, and hotels, and it is home to a large number of rich Filipinos. Makati is regarded as the financial, commercial, and economic capital of the Philippines, as well as the location of the “Philippine Stock Exchange” (PSE).

The city has a tropical monsoon climate, according to the Köppen climate classification system. Makati, like the rest of the Philippines, is totally inside the tropics. Because to its near to the equator, the temperature range is quite narrow, seldom falling below 20 °C (68 °F) or rising over 38 °C (100 °F). However, humidity levels are often high, making it seem considerably warmer. It features a distinct, if brief, dry season from January to May and a comparatively long rainy season from June to December.

Makati City continues to be the wealthiest local government unit (LGU) in the Philippines in terms of revenue from local sources and per capita income. As of the end of 2012, Makati has about 62,000 registered commercial businesses in financial services, wholesale/retail, services, real estate, export/import, and manufacturing. Makati also has the most BPO offices in Metro Manila, with 1,159 firms as of today, as well as the most PEZA-accredited IT Parks and Buildings. Since the implementation of its new Revenue Code in 2006, the Makati City Government has not raised its tax rates. The city has been deficit-free for the last 26 years.

The Makati Central Commercial Center is a developed business district in the city (CBD). EDSA, Gil Puyat Avenue, Arnaiz Avenue, and Chino Roces Avenue around it. It mostly consists of Legazpi Village, Salcedo Village, the Ayala Center, and portions of Bel-Air Village.

The Ayala Triangle is a Makati CBD sub-district that includes the area between Ayala Avenue, Makati Avenue, and Paseo de Roxas, as well as the structures on those streets. The triangle is home to a slew of international corporations, banks, and other big corporations. There are also a few upmarket stores, restaurants, and a park named Ayala Triangle Gardens in the vicinity. Ayala Avenue and Paseo de Roxas are also notable for being the old runways of Nielson Field, Metro Manila’s principal airport in the 1930s.

The Philippine Stock Exchange’s main trading floor is located at Ayala Tower One and the historic Makati Stock Exchange Building, both on Ayala Avenue.

The Makati Business Club is made up of over 800 chief executive officers and senior executives from about 450 of the Philippines’ biggest and most active firms.

The PBCom Tower, Gramercy Residences in Century City, and G.T. International Tower are among the highest buildings in Metro Manila and the Philippines.

The 259-meter-tall PBCom Tower on Ayala Avenue is the country’s highest structure. The Philippine Bank of Communications, or PBCom, has its headquarters here. Since 2001, the PBCom Tower has been officially listed as the highest structure in the Philippines. It has a total height from the ground to the architectural top of 259 meters (850 feet), 52 floors, and an 8-level radio tower.

Makati is one of Metro Manila’s most well-known retail districts. Around the city, there are several shopping malls with foreign and local retail stores, high-end boutiques, eating establishments, and entertainment facilities.

The Ayala Center, situated in the Makati CBD, is a large commercial property run by Ayala Land. The area is well-known for its diverse retail, entertainment, and cultural attractions, making it the city’s major shopping and cultural district. It is a sprawling walkable complex with high-end malls housing theaters, local and foreign stores, homegrown restaurants, and multinational food franchises. Greenbelt,Glorietta, Park Square, and The Link are among the retail complexes situated in the Ayala Center. The Ayala Center also has three department stores: SM Makati, Rustan’s, and The Landmark.

The Rockwell Center, in addition to the Ayala Center, is a famous retail complex in Makati. It is the location of the Power Plant Mall. Popular open-air community markets include the Salcedo Saturday Market and the Legazpi Sunday Market. Organic goods, speciality foods, fruits, vegetables, seafood, gourmet items, and antiques are available at these markets.