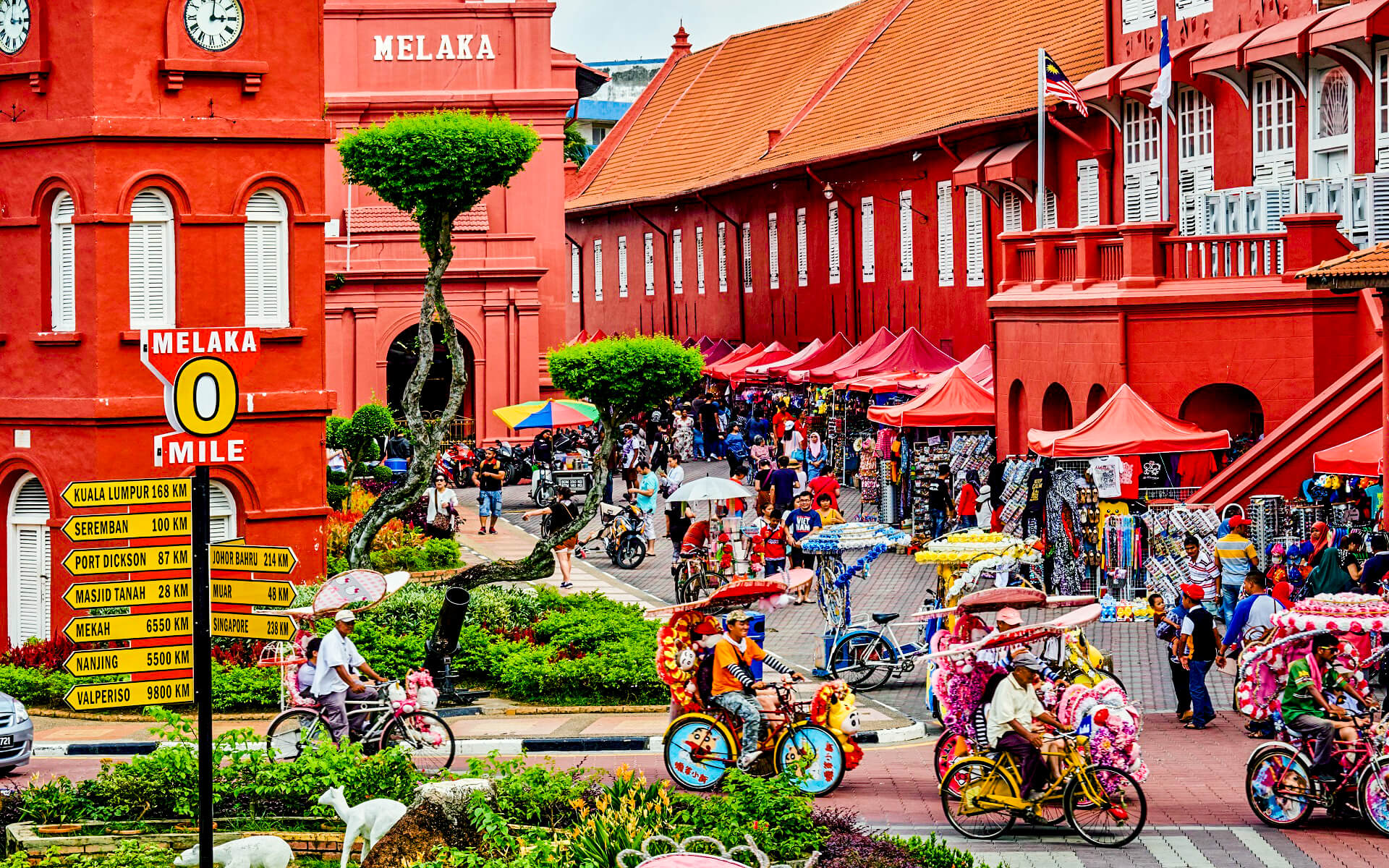 Malacca City is the capital city of Malaysia’s Malacca state. It has a population of 484,885 people in 2010. It is one of the oldest Malaysian towns in the Malacca Strait, having flourished as a profitable entrepôt throughout the Malacca Sultanate’s reign. The current city was built by Parameswara, a Sumatran prince who fled to the Malay Peninsula after Srivijaya was defeated by the Majapahit. Following the foundation of the Malacca Sultanate, the city attracted merchants from the Middle East, South Asia, and East Asia, as well as the Portuguese, who wished to control the Asian trade route. After Portugal seized Malacca, the city became a flashpoint as the sultanates of Aceh and Johor sought to seize power from the Portuguese.

Following a series of conflicts between these regions, Aceh’s authority waned, but Johor survived and increased its control over area previously lost to Aceh in Sumatra when Johor collaborated with the Dutch who came to establish dominion over Java and the Maluku Islands. The Johor-Riau Empire, however, was separated into the sultanates of Johor and Riau-Lingga owing to royal internal warfare between the Malay and Bugis. When the British arrived to establish their foothold on the Malay Peninsula, this split became permanent. The Dutch, who already felt threatened with the presence of the British, started conquering the Riau-Lingga Sultanate along with the rest of Sumatra, while Johor fell under British control after the signing of the Anglo-Dutch Treaty in 1824.

When the British succeeded in expanding their authority over the Malay Peninsula, the city quickly became a development region under the British Empire’s Straits Settlements. The Japanese invaded in World War II and controlled the region from 1942 to 1945, halting growth and rising affluence. Many of the city’s population were seized and forced to build the Death Railway in Burma during the occupation (present-day Myanmar). Following the battle, the city was restored to the British and continued to serve as Malacca’s capital. The city-position state’s as a capital endured until Malaysia’s creation in 1963, and it was designated a UNESCO World Heritage Site in 2008, along with George Town in Penang, for its lengthy history.

The city of Malacca’s economy is heavily focused on tourism. As the state’s economic center, it also hosts a number of international conferences and trade fairs. The settlement is situated along the Maritime Silk Road, which China proposed in 2013. A Famosa, Jonker Walk, Little India, Portuguese Settlement, Stadthuys, Maritime Museum, Christ Church, Malacca Sultanate Palace Museum, Malacca Zoo, and Taming Sari Tower are among the tourist attractions in and around Malacca.

Modern-day Malacca is a lively ancient city with a distinct historical and cultural background as the capital of a great Malay kingdom before to colonial administration, as well as following Portuguese, Dutch, and British domination. In July 2008, UNESCO designated the city center, together with Georgetown, Penang, as a World Heritage Site.

Malacca’s weather is hot and humid all year, with rainfall that varies in severity depending on the season. It is one of Malaysia’s driest cities, with an annual rainfall of just under 2,000 mm (79 in), whereas other regions in Peninsular Malaysia get an average of approximately 2,500 mm (98 in). Malacca, on the other hand, has no dry season since monthly rainfall averages more than 100 mm (3.9 in). According to the Köppen climatic classification system, Malacca has a tropical rainforest climate (Af). Malacca may be visited all year due to its reasonably consistent weather. Temperatures typically vary from 30 °C (86 °F) to 35 °C (95 °F) during the day and from 27 °C (81 °F) to 29 °C (84 °F) at night, however temperatures may drop during periods of severe rainfall. Malacca’s yearly rainfall is often lower than Malaysia’s annual rainfall. After a hot and humid day, it frequently rains in the evening.

The city is situated on both banks of the Malacca River near its mouth, which flows into the Malacca Straits. The city is around 152 kilometers from Kuala Lumpur, Malaysia’s capital, and 245 kilometers from Singapore. It has risen in size as a result of large-scale land reclamation, particularly in the south. Its physical characteristics include flat and gently sloping plains spanning from its shore.

The city’s historic core is situated along the former shoreline, and it comprises St Paul’s Hill, A Famosa, and the Dutch Square on the right (eastern) side of the river, and the old Chinatown on the left (western) bank. The Chinese Hill (Bukit Cina), which has a big historic Chinese cemetery, was once situated to the northeast of the city but is now encircled on all sides by modern structures.

Since the heyday of the Malacca Sultanate, the city has thrived as a prosperous entrepôt, ranking among Venice, Cairo, and Canton. Malacca had grown into a cosmopolitan metropolis with a long-standing European history by the time the European invasion began. The advent of Chinese merchants and coolies during the Sultanate period, as well as European colonialism, provided a significant boost to the economy, particularly under the administrations of the Dutch and the British. Due to its historical treasures and melting pots of cultural influences, which drew many local and international visitors to visit the city, tourism has been more prominent than the primary-based business in contemporary times, which has also contributed to the state economy’s revenue. Aside from its strategic position on the maritime Silk Road, the city profited from China’s and India’s development as international economic giants. The Malacca Worldwide Trade Centre has held various national, regional, and international conferences, congresses, and trade fairs. The Malacca state government began developing a new economic development area in the central city center called as the Hang Tuah Trade Centre in early 2016, which would include trade centers, higher education, hotel, and business.