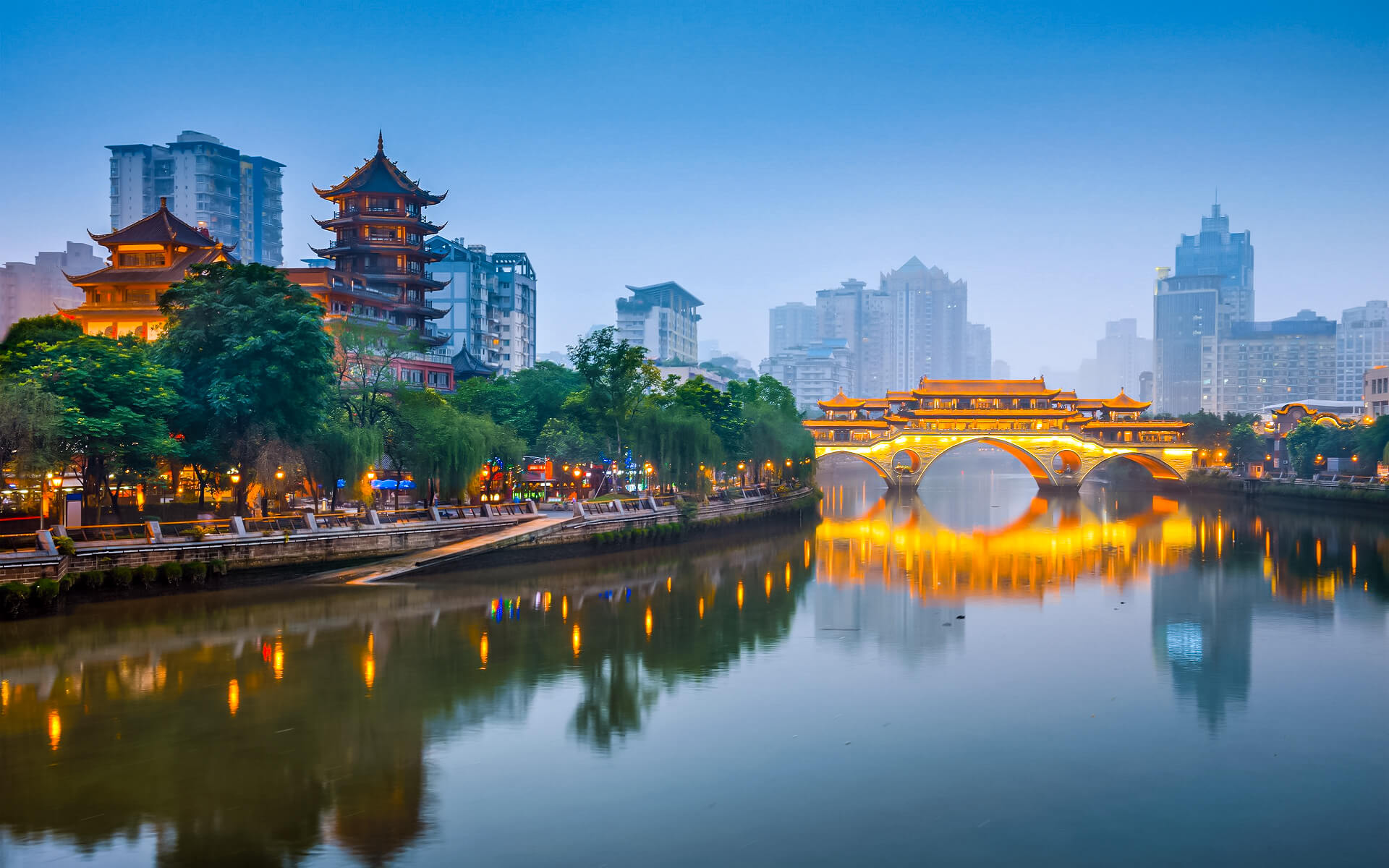 Chengdu, traditionally romanized as Chengtu, is a large city in Western China and the provincial capital of Sichuan province in Southwest China. It has administrative standing as a sub-provincial government. The administrative area has a population of 14,427,500 people, with a city population of 10,152,632. Chengdu is China’s fifth-most populated agglomeration, according to the 2010 census, with 10,484,996 people living in the built-up (or metro) region, which includes Guanghan City in Deyang and Xinjin County. Chengdu is one of Western China’s most major economic, financial, commercial, cultural, transportation, and communication hubs. Chengdu Shuangliu International Airport is one of the world’s top 30 busiest airports, while Chengdu Railway Station is one of China’s top six rail hubs. Chengdu is also home to a slew of multinational businesses and more than a dozen consulates. Due to the high demand in Western China, more than 260 Fortune 500 businesses have opened operations in Chengdu. China Daily ranked it as China’s fourth-most livable city in 2006.

Chengdu is situated in the lush Chengdu Plain, which is also known as the “Country of Heaven”, which is commonly translated as “The Land of Abundance.” The Jinsha site implies that during the period of the foundation of the state of Shu, prior to its absorption by Qin in 316 BC, Chengdu became the hub of the bronze age Sanxingdui civilization.

Chengdu is situated in China’s Sichuan Province, on the outskirts of the Red Basin’s rich plains. Chengdu is known as the “Land of Milk and Honey” because of its agricultural abundance. The Funan river runs through the city, but boat transportation, which was prevalent until the 1960s, has all but disappeared.

The metropolitan region is organized into five districts and twelve counties, with a population of almost 14 million people. Chengdu has a reputation for being a “lazy” city that values culture and leisure, and as a consequence of this and its abundance of green space, it is considered one of China’s most livable megacities. It has a thriving nightlife scene and a vast city center with numerous new western-style structures.

The city is flanked to the east by tiny mountains and situated in the Red Basin, thus summers are hot and humid. Furthermore, the slopes of the huge Tibetan Plateau and the breathtakingly picturesque mountains of west Sichuan are an hour to the west.

Don’t expect to obtain a tan in this city since it is known for its lack of sunshine.

Chengdu has a humid subtropical climate affected by monsoons that is mostly pleasant and humid. It has four different seasons, with modest rainfall concentrating mostly in the summer months, and is devoid of both hot summers and cold winters. In the winter, the Qin Mountains (Qinling) to the north buffer the city from harsh Siberian winds, making the brief winter milder than in the Lower Yangtze. In January, the 24-hour daily mean temperature is 5.6 °C (42.1 °F), and although snow is uncommon, there are a few frosty episodes each year. Summers are hot and humid, although not to the level that they are in the Yangtze basin’s “Three Furnaces” cities of Chongqing, Wuhan, and Nanjing. In July and August, the 24-hour daily mean temperature is approximately 25 °C (77 °F), with afternoon highs sometimes reaching 33 °C (91 °F); prolonged heat, as seen in most of eastern China, is uncommon. Rainfall occurs throughout the year, but is most abundant in July and August, with relatively little in the colder months. Chengdu also has one of the lowest annual sunlight totals in the country, with less sun per year than parts of Northern Europe, and most days are gloomy, even when there is no rain. This is particularly true during the winter, when the weather is often drab and dismal, exacerbating the bad air quality. The city gets 1,073 hours of bright sunlight each year, with monthly percent potential sunshine ranging from 16 percent in December to 38 percent in August. Autumn (October–November) is brighter and warmer throughout the day than spring (March–April). The yearly average temperature is 16.14 degrees Celsius (61.1 degrees Fahrenheit), with extremes ranging from 5.9 degrees Celsius (21 degrees Fahrenheit) to 37.3 degrees Celsius (99.1 degrees Fahrenheit).

Chengdu is situated on a broad plain with elevations varying from 450 meters to 720 meters.

The high and steep Longmen Mountain to the northwest, and the Qionglai Mountains to the west, both of which surpass 3,000 meters (9,800 feet) in height and contain Miao Jiling (5,364 meters, 17,598 feet) and Xiling Snow Mountain (5,164 m, 16,942 ft). A big primeval forest with substantial biological resources and a giant panda habitat may also be found in the western mountainous region. The low Longquan Mountain is east of Chengdu, while the west bordering region of the hilly terrain of the middle reaches of the Min River, an area marked by multiple converging rivers, is west of Chengdu. Because to its lush soil, pleasant temperature, and unique Dujiangyan Irrigation System, Chengdu has been renowned as “the Abundant Land” from ancient times.

Chengdu is situated on the Chengdu Plain, on the western side of the Sichuan Basin, with plains dominating the landscape. The prefecture’s latitude varies from 30° 05′ to 31° 26′ N, while its longitude extends from 102° 54′ to 104° 53′ E, spanning 192 kilometers (119 miles) east to west and 166 kilometers (103 miles) south to north and administers 12,390 square kilometers (4,780 square miles) of territory. Deyang (NE), Ziyang (SE), Meishan (S), Ya’an (SW), and the Ngawa Tibetan and Qiang Autonomous Prefecture are all nearby prefectures (N). The Jin, Fu, and Sha Rivers run through the city, which is situated at a height of 500 meters (1,600 feet). The geography gets more complicated outside of the local metropolitan area: to the east, the Longquan Range and the Penzhong Hills  to the west, the Qionglai Mountains, which climb to 5,364 m (17,598 ft) in Dayi County. The lowest point in Chengdu Prefecture is in Jintang County, at 378 meters (1,240 feet).

Chengdu has been recognized by China’s state council as the country’s western logistics, commerce, finance, scientific, and technology center, as well as a transportation and communication hub. It is also a vital industrial and agricultural hub.

According to a report published by the State Information Center in 2010 based on research conducted by Nobel Laureate Dr. Robert Mundell and celebrated Chinese economist Li Yining, Chengdu has become a “engine” of the Western Development Program, a benchmark city for the investment environment in inland China, and a major leader in new urbanization.

Twelve Fortune 500 firms built offices, branches, or operation centers in Chengdu in 2010, the most in recent years, including ANZ Bank, Nippon Steel Corporation, and Electricite De France. Meanwhile, Fortune 500 businesses that have created headquarters in Chengdu, including as JP Morgan Chase, Henkel, and GE, have boosted their investments and expanded their presence in Chengdu. By the end of 2010, Chengdu had over 200 Fortune 500 firms, putting it #1 in Central and Western China in terms of the number of Fortune 500 enterprises. There are 149 international corporations and 40 local companies among them.

Chengdu has risen to the top of China’s investment destinations, according to the 2010 AmCham China White Paper on the State of American Business in China.

Numerous large-scale firms support Chengdu’s core sectors, which include machinery, automobiles, medicine, food, and information technology. In addition, a growing number of high-tech businesses from outside Chengdu have established themselves there.

Chengdu is quickly becoming one of Central and Western China’s most popular investment destinations. By October 2009, 133 multinational corporations with subsidiaries or branch offices in Chengdu were among the world’s 500 biggest corporations. Intel, Cisco, Sony, and Toyota, who have assembly and manufacturing bases in Chengdu, as well as Motorola, Ericsson, and Microsoft, which have R&D facilities in Chengdu, are among these MNEs. Chengdu’s proposal to build a national bio-industry base has been officially accepted by the National Development and Reform Commission. Chengdu’s government has announced an intention to develop a 90 billion CNY biopharmaceutical industry by 2012. China’s aerospace industry has started work on a high-tech industrial park in the city that will focus on space and aviation technologies. The local government hopes to recruit both foreign and domestic service outsourcing enterprises, and to establish itself as a well-known service outsourcing hub in China and throughout the globe.

The country code for China is 86. The area code for Chengdu is 28. There are coin-operated pay phones everywhere across Chengdu, and calling cards may be obtained from a variety of retailers. Local landline phone numbers in Sichuan are eight digits long, but cellular phone numbers are eleven digits long and begin with 13, 15, or 18.

Internet connectivity is available in most guesthouses and at low-cost internet cafés across town. Look for the Web-character and the Bar-character in the Chinese name for an internet cafe:

On the second floor of the Xinnanmen Bus Station, only 100 meters from the Traffic Hotel, there is a huge Internet café. The connection is quick, and the access time is 2/hour.

Foreigners are frequently unable to use public internet cafés because registration requires a Chinese ID card, which foreigners do not have. This is not an issue at hotels or guesthouses.