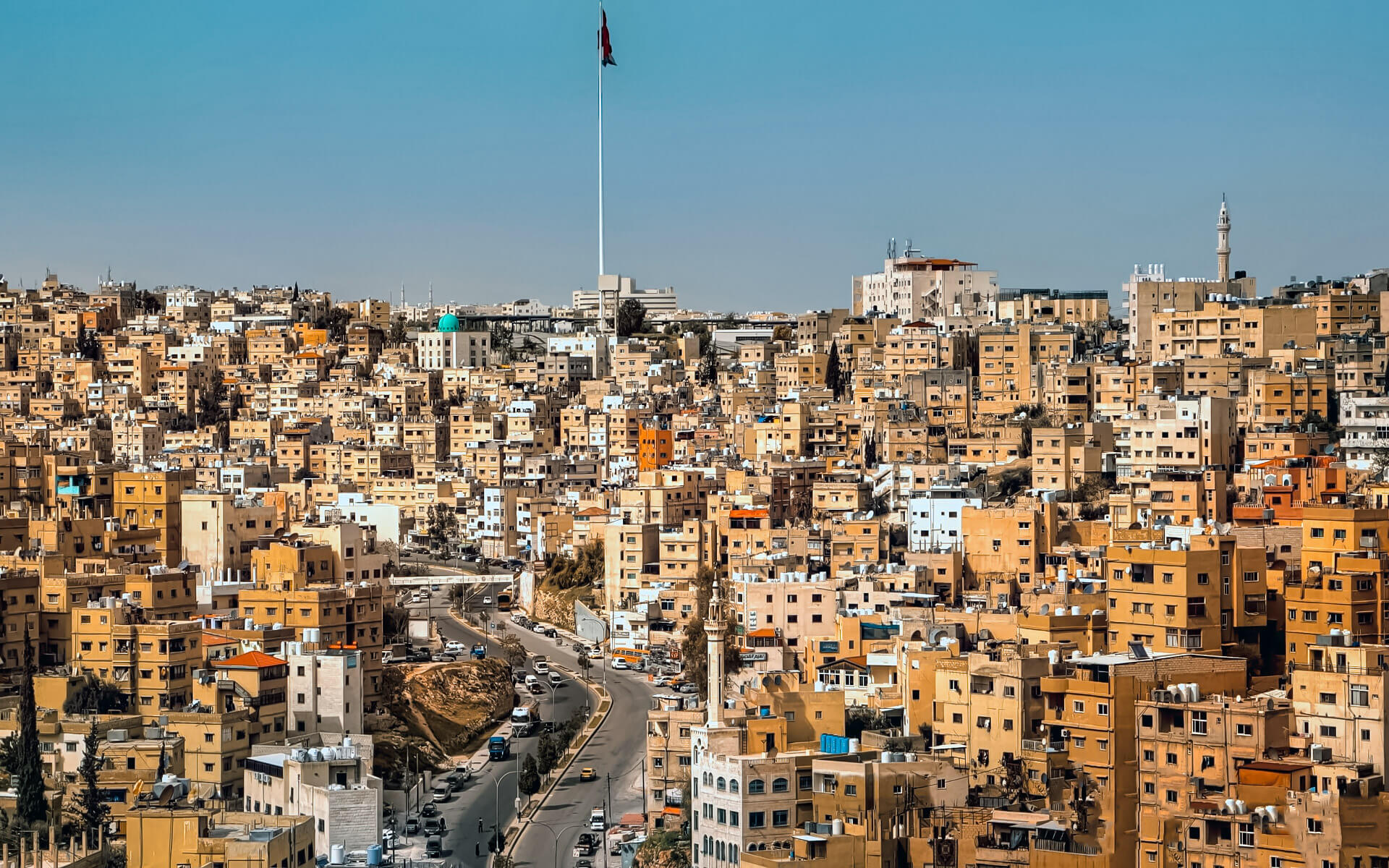 Amman is Jordan’s capital and most populated city, as well as the country’s economic, political, and cultural hub.

Amman is the administrative center of the Amman Governorate and is located in north-central Jordan. It has a population of 4,007,526 people and covers an area of 1,680 square kilometers (648.7 sq mi).

The city, along with Doha, is one of the most preferred sites in the Arab world for international firms to establish regional headquarters, behind only Dubai. These three cities are predicted to garner the lion’s share of multinational business activity in the area during the next ten years.

Amman is now regarded as one of the most open and westernized Arab towns. It is a popular tourist site in the area, especially with Arab and European visitors.

Amman is an excellent base for seeing the nation and, contrary to common assumption, has a few objects of interest to the tourist. The city is typically well-equipped for visitors, somewhat well-organized, and the inhabitants are quite pleasant.

Although barely visible from the air above Amman, the city has several surprises in store for visitors. If one asks, one may find anything in Amman. Visit Amman’s Roman Amphitheatre, study at Jordan University, or relax at a beautiful hotel. Jordan has a plethora of shopping centers. With new building in Abdali, a high-end visitor may dine at the most upscale restaurant, study at the American University of Jordan, stay in a five-star hotel, or buy in enormous malls all within a few yards of one another in a few years. Much less is being done to appeal to the budget visitor, while (as of early 2011) urban beautification is taking place in the city center (old town), which is being cleaned up and made more pedestrian-friendly.

Amman is undergoing a huge (some would say reckless) transformation from a tranquil town to a busy city, some of whose neighborhoods seem hell-bent on imitating Dubai. Amman’s roads have a reputation for being steep and narrow in some of the city’s less developed areas, although the city now boasts state-of-the-art motorways and paved avenues. The steep slope and high traffic continue to make it difficult for walkers and the occasional bike. The city is dotted with new resorts and hotels, and there is much for visitors to see and do. Use Amman as a jumping-off point for trips to adjacent Jordanian towns and communities.

Amman is regarded as one of the Arab world’s most liberal and westernized towns. The city has grown in popularity with Western expats and college students seeking to live, study, or work in the Middle East or the Arab world in general.

The city’s culinary culture has evolved beyond shawerma shops and falafel places to include a wide range of prominent western restaurants and fast-food outlets, including Asian fusion restaurants, French bistros, and Italian trattorias. Among Western expats and Persian Gulf visitors, the city has become known for its exquisite eating scene.

Amman now has nightclubs, music bars, and shisha lounges, transforming the city’s reputation as the conservative capital of the monarchy. Jordan’s youthful population is shaping the country’s booming new nightlife culture. In addition to the many drinking and dancing establishments on the social circuit of the city’s wealthy population, Amman features cultural entertainment events such as the annual Amman Summer Festival. Souk Jara is a Jordanian annual weekly flea market that takes place every Friday throughout the summer. Abdoun Circle is a significant hub of the city’s nightlife, with clubs strictly adhering to a “couples only” policy. Sweifieh is Amman’s unofficial red-light district, housing the majority of the city’s nightclubs, pubs, strip-clubs, massage parlors, and other adult entertainment facilities. Many pubs and bars can be found in Jabal Amman and Jabal al-Weibdeh, making the region famous among bar hoppers.

There are several nightclubs and pubs across the city, particularly in West Amman. As of 2011, Jordan has 77 registered nightclubs (excluding bars and pubs), the majority of which were in Amman. In Amman, there are 222 licensed liquor outlets.

Because to its location in the highlands near the Mediterranean climatic zone, Amman has a semi-arid climate.

Summers are pleasantly hot and windy; nevertheless, one or two heat waves may occur.

Spring is short and warm, with highs reaching 28 degrees Celsius (82 degrees Fahrenheit). Spring generally begins in April or May and lasts around a month.

Winter typically begins around the end of November and lasts until early to mid-March. Temperatures are normally at or below 17 degrees Celsius (63 degrees Fahrenheit), with snow occurring once or twice a year.

Amman features severe microclimate instances, and practically every region has its unique weather. Locals are aware that certain boroughs, such as the northern suburb of Abu Nser, are among the coldest in the city and may see frost, while other milder districts, such as Marka, may provide significantly warmer temperatures to its residents at the same time.

Amman is located on the East Bank Plateau, an upland with three main wadis running through it.

The city was originally constructed on seven hills. Amman’s geography is characterized by mountains. The city’s most major areas are called for the hills or mountains on which they are built. The elevation in the region varies from 700 to 1,100 meters (2,300 to 3,600 ft). Al-Salt and al-Zarqa are to the northwest and northeast, respectively, Madaba is to the west, and al-Karak and Ma’an are to the southwest and southeast, respectively, of Amman.

One of Amman’s few surviving springs currently delivers water to the Zarqa River.

Jordan’s banking industry is one of the country’s most important economic pillars. Despite the Arab world’s upheaval and economic hardships as a consequence of the Arab Spring revolutions, Jordan’s banking industry grew in 2014. There are now 25 banks in the industry, 15 of which are registered on the Amman Stock Exchange. Amman is the headquarters of the multinational Arab Bank, one of the major financial organizations in the Middle East, with over 600 branches in 30 countries across five continents. Arab Bank owns 28 percent of the Amman Stock Exchange and is the exchange’s highest-ranked entity in terms of market capitalization.

Amman is the fourth most visited Arab city and the ninth most expensive for foreign visitors. In 2011, over 1.8 million visitors visited Amman and spent over $1.3 billion in the city.

The development of Queen Alia International Airport exemplifies the Greater Amman Municipality’s significant investment in the city’s infrastructure. The recent building of a public transit system and a national railway, as well as road expansion, are designed to alleviate the traffic produced by the city’s millions of yearly visitors.

Amman is establishing itself as a commercial center. The city’s skyline is constantly changing due to the advent of new constructions. Following the 2003 Iraq War, Amman saw a huge increase in commerce. Jordan’s principal airport, Queen Alia International Airport, is situated south of Amman and serves as a hub for the country’s national carrier, Royal Jordanian, a significant regional airline.

According to a Dunia Frontier Consultants research, Amman, Doha, Qatar, and Dubai, United Arab Emirates are the preferred centers for multinational firms operating in the Middle East and North Africa area.