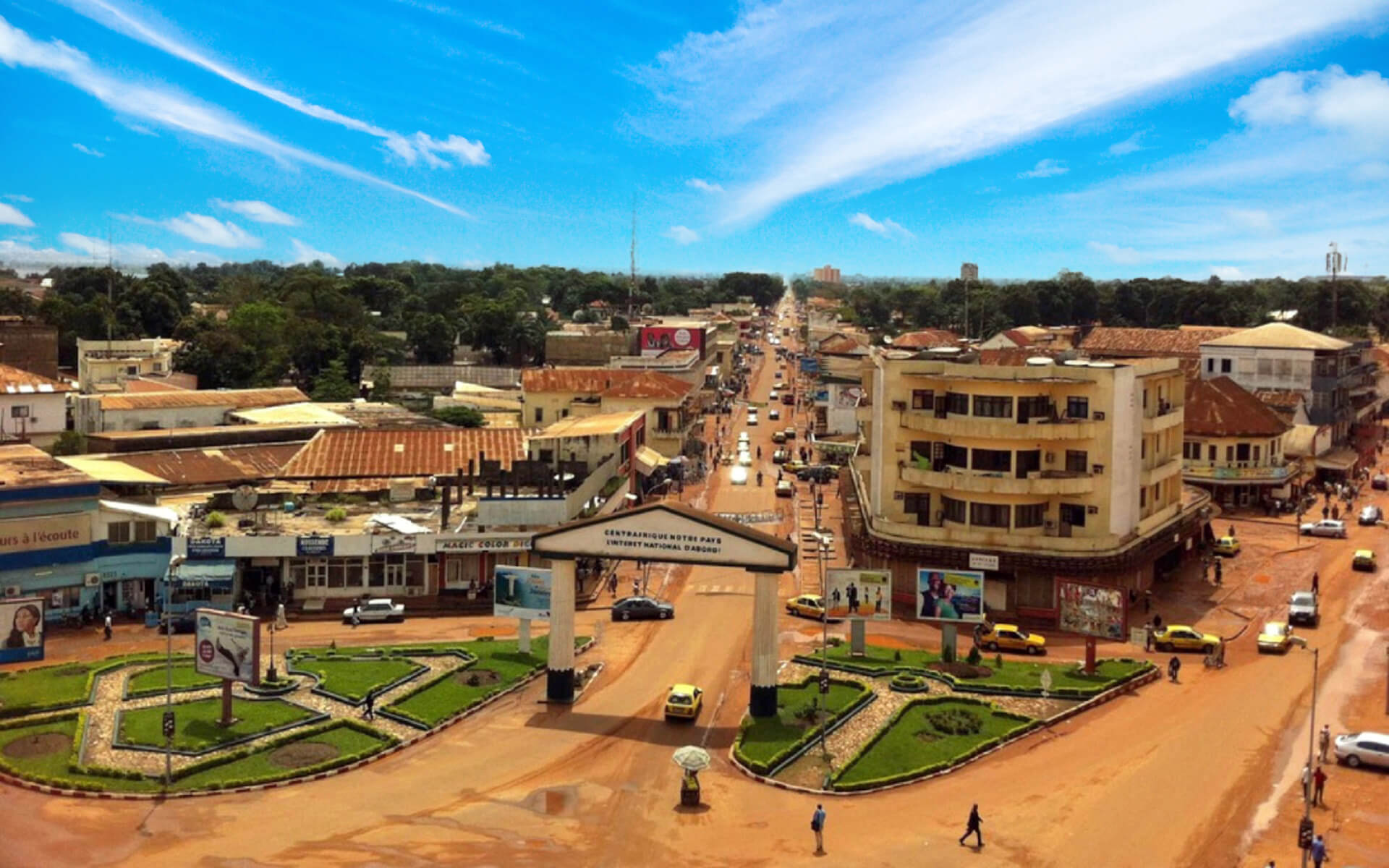 The capital of the Central African Republic is Bangui (pronounced bang-EE). Bangui is located on the Ubangi River’s northern bank, right below a set of rapids that restrict large commercial shipping farther upriver, towards the country’s southern border. The navigable Ubangi River swings steeply south past Bangui and joins to the Congo River as its primary northern tributary just south of the Equator at Brazzaville. The river divides the Central African Republic from the Democratic Republic of the Congo (DRC). Zongo, a Congolese village, is located across the river from Bangui.

Because the Central African Republic is located just north of the Equator, daily maximum temperatures seldom dip below 30°C throughout the year. From May through October, the rainy season is in full swing. Bangui is somewhat hotter and wetter than the northern portions of the nation due to its location in the south of the country and proximity to the Equator.

The Central African Republic is located close north of the Equator, with average daily temperatures of at least 30 degrees Celsius. Bangui, in the south of the nation near the Equator, is significantly hotter and wetter than the north. The climate is tropical savanna (Köppen: Aw), with dry winters. The warm season runs from 23 January to 18 March, whereas the cold season is from 20 June to 27 August, with plenty of rain and thunderstorms. The city is surrounded by lush tropical rainforests on both sides of the river. Several of its neighborhoods are located in low-lying regions that are subject to flooding on a regular basis. In June and July 2009, severe rains displaced 11,000 people.

Bangui is located on the country’s southern border on the northern bank of the Ubangi River, right below a set of rapids that prevent substantial commercial vessels from proceeding upriver. It is the only large city on the river, with a total area of 67 square kilometers (26 sq mi). With beautiful green hills as a background, the navigable Ubangi River swings abruptly south beyond Bangui and links to the Congo River as its primary northern tributary just south of the equator at Brazzaville. The boundary between the Central African Republic and the Democratic Republic of the Congo is marked by the Ubangi River. Zongo, a Congolese village, is located across the river from Bangui. The river runs east of Bangui’s downtown area. The river’s discharge is three times greater during the rainy season than it is the rest of the year. In the 1970s, the city was also known as La Coquette (the lovely city).

The city core has a massive arch dedicated to Bokassa, as well as the presidential palace and the major market, all close to the river. The residential area’s core, 5 kilometers (3.1 miles) north, features the main market and much of the nightlife. Many people in the suburbs live in Kodros, which are made of mud bricks and have a thatched roof.

Bangui is the epicenter of the Bangui Magnetic Anomaly, one of the world’s greatest crustal anomalies and Africa’s largest.” It has the shape of a massive elliptical with a center point at 6 degrees north and 18 degrees east, measuring 700 kilometers (430 miles) by 1,000 kilometers (620 miles). The northern, southern, and center anomalies are the three components or segments that make up the anomaly. The magnetic equator runs right through the center of the feature. The origins of the trait remain unknown, despite the fact that it is frequently recorded.

Bangui is the administrative, trade, and commercial capital of the country. During WWII, the nation got wealthy as rubber, cotton, coffee, uranium, and diamond exports surged. Following the war, the employment of locals in mainstream administration resulted in the construction of the country’s infrastructure, which encouraged commerce while stalling the country’s independence movement.

Diamond output increased significantly under David Dacko’s administration, which lasted from 1960 to 1966. This happened when a statute permitting local residents to mine for diamonds removed the monopoly of the French concessionary firms. Diamonds became the country’s primary export when Dacko established a diamond cutting plant in Bangui. However, by the conclusion of his five-year term, widespread corruption and financial mismanagement had resulted in underpaid labor and public unrest. In 1966, Bokassa gained control in a military coup. When new institutions were formed in the city, Bangui became the primary focus for social and cultural activities in the area. However, political unrest in the country, widespread corruption, and President Bokassa’s autocratic authority, which was centered in the city, resulted in an economic slump in the 1970s, which was compounded by a drop in worldwide prices for the country’s key exports. This resulted in widespread poverty and warfare, which was exacerbated by migrants fleeing problematic neighboring nations.

Bangui had its first bank in 1946, when the Bank of West Africa opened a branch there. The city was traditionally a key center for ivory commerce, and Arab dealers controlled it. Textiles, food, beer, shoes, and soap are among the things made in Bangui. Cotton, rubber, lumber, coffee, and sisal are the principal exports. As a result of the prolonged conflict, unemployment in the city hovered at 23% in 2001. The national penitentiary for males, Ngaragba Central Prison, is situated in Bangui. It held 476 prisoners as of 2007, with bad jail conditions recorded.

Users may access the internet at internet cafés in town using their own laptop computers. The download speeds are acceptable, and the costs are affordable. MOOV offers GPRS/EDGE internet connection using USB sticks at affordable pricing across Bangui and the rest of CAR.

If correctly setup, MOOV and Orange phones can connect to GPRS/Edge networks. At PKZero’s communications offices, configuration is offered for free. EDGE speeds are typical, however they may decay to G. The Bangui center has GPRS, however it fades off around PK12.

The airport servicing Bangui is Bangui M'Poko International Airport (BGF). It's around 7 kilometers (4 miles) northwest of Bangui. The airport handled 53,862 passengers in 2004. Douala, Tripoli, Paris (once a week), Brazzaville, Yaoundé, Cotonou, and N'Djamena are all served.All European (and possibly most other) travelers need a visa,...

The colonial town design of Bangui has been preserved, with broad boulevards leading to the central market place. Boganda Museum, Bangui Zoo, and the Presidential Palace, previously the Bokassa Palace, are among Bangui's attractions. The Roman Catholic Archdiocese of Bangui is headquartered at Notre-Dame Cathedral. Traditional musical instruments, weaponry,...

The city boasts a large French expat population, which has resulted in one of Africa's greatest ice cream parlors, a supermarket that offers foreign (mostly French) delicacies like as foie gras, and a fantastic Italian restaurant.The cuisine of the Central African Republic is known as Centrafrican, and the Bangui...