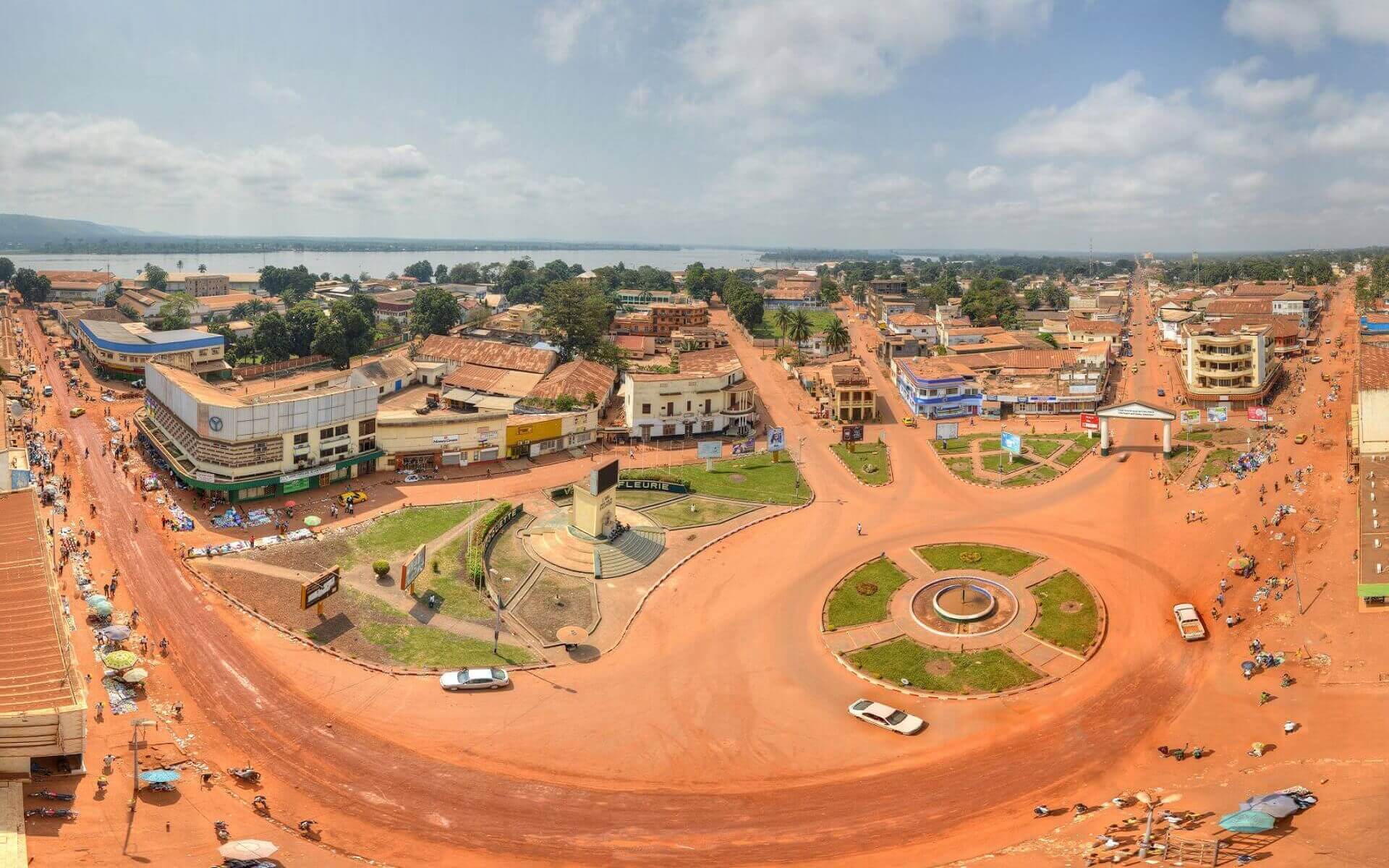 The CAR is mostly made up of Sudano-Guinean savannas, but it also has a Sahelo-Sudan zone in the north and an equatorial forest zone in the south. The nation is divided into two thirds by the Ubangi River basin (which goes into the Congo), and the other third by the Chari River basin, which flows into Lake Chad.

Although the Central African Republic has been inhabited for millennia, the nation’s current borders were defined by France, who controlled the region as a colony beginning in the late nineteenth century. The Central African Republic was controlled by a series of authoritarian dictators after achieving independence from France in 1960; by the 1990s, aspirations for democracy led to the first multi-party democratic elections in 1993. Ange-Félix Patassé was elected president, but was deposed by General François Bozizé in a coup in 2003. The Central African Republic Bush War began in 2004, and despite peace treaties in 2007 and 2011, warfare erupted between several factions in December 2012, resulting in ethnic and religious cleansing of the Muslim minority and significant population displacement in 2013 and 2014.

Despite having considerable mineral deposits and other resources, such as uranium reserves, crude oil, gold, diamonds, cobalt, timber, and hydropower, as well as large amounts of arable land, the Central African Republic is one of the world’s poorest countries. According to the Human Development Index (HDI), the country ranked 187th out of 188 countries in 2014, with the second lowest level of human development.

In general, the climate is tropical. The northern regions are prone to harmattan winds, which are hot, dry, and dusty. Desertification has occurred in the northern areas, while the northeast is desert. The rest of the nation is vulnerable to floods from neighboring rivers.

The Central African Republic was ranked the nation least impacted by light pollution in the November 2008 edition of National Geographic.

The Central African Republic is a landlocked country in the African continent’s heartland. Cameroon, Chad, Sudan, South Sudan, the Democratic Republic of the Congo, and the Republic of the Congo border it. The nation is located between the latitudes of 2° and 11°N and the longitudes of 14° and 28°E.

Much of the land is flat or undulating plateau savanna 500 meters (1,640 feet) above sea level. The World Wildlife Fund’s East Sudanian savannaecoregion encompasses the majority of the northern part. There are scattered hills in the southwest areas, in addition to the Fertit Hills in the northeast of the CAR. The Yade Massif, a granite plateau with a height of 348 meters, is located in the northwest (1,143 ft).

The Central African Republic is the world’s 45th-largest nation, with 622,941 square kilometers (240,519 square miles). It is about the size of Ukraine.

According to the United Nations, about 11% of the population aged 15 to 49 is HIV positive. Only 3% of the nation has access to antiretroviral treatment, compared to 17% in neighboring countries Chad and the Republic of the Congo.

The country is split into more than 80 ethnic groups, each with its own language. The Baya, Banda, Mandjia, Sara, Mboum, M’Baka, Yakoma, and Fula or Fulani are the main ethnic groupings, with others including Europeans, primarily of French ancestry.

It is believed that forest covers up to 8% of the nation, with the densest areas usually found in the southern regions. The woods are extremely varied, with economically significant Ayous, Sapelli, and Sipo species among them. Deforestation occurs at a rate of approximately 0.4 percent per year, and lumber poaching is widespread.

In 2008, the Central African Republic has the lowest level of light pollution in the world.

The Bangui Magnetic Anomaly, one of the biggest magnetic anomalies on Earth, is centered in the Central African Republic.

The Dzanga-Sangha National Park is situated in a rain forest in the southwest. The nation is well-known for its forest elephants and western lowland gorillas. The Manovo-Gounda St Floris National Park in the north is densely inhabited with animals, including leopards, lions, cheetahs, and rhinos, and the Bamingui-Bangoran National Park in the northeast of CAR. Poachers, especially those from Sudan, have had a significant impact on the parks during the last two decades.

According to the 2003 national census, 80.3 percent of the population is Christian (51.4 percent Protestant and 28.9 percent Roman Catholic), with 15 percent Muslim. Indigenous belief (animism) is practiced as well, and many indigenous beliefs are integrated into Christian and Islamic practice. Religious tensions between Muslims and Christians, according to a UN director, are high.

The Republic’s per capita income is frequently listed as being around $400 per year, one of the lowest in the world, but this figure is based primarily on reported export sales and ignores the unregistered sale of foods, locally produced alcoholic beverages, diamonds, ivory, bushmeat, and traditional medicine. The informal economy of the Central African Republic is more significant to most Central Africans than the official economy. Poor economic growth and the country’s landlocked status impede export commerce.

The Central African Republic’s currency is the CFA franc, which is acknowledged across the former French West African nations and trades at a fixed rate to the Euro. Diamonds are the country’s most significant product, accounting for 40–55 percent of export earnings, although it is believed that between 30 and 50 percent of those produced each year are illegally exported.

The production and sale of food crops such as cassava, peanuts, maize, sorghum, millet, sesame, and plantain dominate agriculture. The yearly real GDP growth rate is somewhat more than 3%. The fact that the total production of cassava, the staple food of most Central Africans, ranges between 200,000 and 300,000 tonnes per year, while cotton, the main exported cash crop, ranges between 25,000 and 45,000 tonnes per year, demonstrates the importance of food crops over exported cash crops. Food crops are not exported in significant numbers, but they remain the country’s main cash crops, since Central Africans earn much more money from the periodic sale of excess food crops than from exported cash crops like cotton or coffee. Much of the nation is self-sufficient in food crops; however, the prevalence of the tsetse fly impedes cattle growth.

The Central African Republic is a member of the Organization for the Harmonization of Business Law in Africa (OHADA). In the 2009 World Bank Group report Doing Business, it was rated 183rd out of 183 in terms of ‘ease of doing economic,’ a composite score that takes into account laws that promote and those that hinder business activity.

According to the CIA World Factbook, about fifty percent of the population of CAR is Christian (Protestant 25 percent, Roman Catholic 25 percent), while 35 percent follow indigenous beliefs and 15 percent practice Islam.

Lutherans, Baptists, Catholics, Grace Brethren, and Jehovah’s Witnesses are among the missionary organizations active in the nation. While the majority of these missionaries are from the United States, France, Italy, and Spain, there are also many from Nigeria, the Democratic Republic of the Congo, and other African nations. When violence erupted between rebel and government troops in 2002–3, a large number of missionaries fled the country, although many have since returned to continue their work.

According to Overseas Development Institute research, religious leaders have mediated between communities and armed groups throughout the conflict that has lasted since 2012. They have also offered sanctuary for individuals in need.

By airBangui M'Poko International Airport is the country's sole international airport (and the only airport with scheduled flights) (IATA: BGF). There is no airline in Central Africa that provides regional connections or transfers to domestic aircraft. Air France is the sole airline that flies to Europe, traveling to Paris....

The country's official museum, the Musée Ethnograhique Barthélémy Boganda in Bangui, contains a good collection of indigenous instruments, weaponry, tools, and exhibits concerning local customs, religion, and architecture.Prehistoric rock drawings may be discovered in a variety of places, but Bambari has some of the finest.The "Chutes de Boali," a...

Visits and stays with Pygmy villages are likely the most appealing to the country's few visitors. Hunting with traditional weapons/devices, collecting medicinal herbs with the village ladies, participating in a night of music and dancing, and much more are all possible activities.Trek into the rainforest in search of gorillas,...

Food in Central African RepublicBangui offers a broad range of cuisines, including Chinese, Lebanese, French, and indigenous fare. Food at restaurants owned by foreigners is extremely costly, with prices ranging from $10 to $20 US per dish (or more). Local cuisine, on the other hand, may be costly depending...

The Central African Republic's music takes many diverse forms. Western rock and pop music, as well as Afrobeat, soukous, and other genres, have grown in popularity throughout the country. The sanza is a well-known instrument.Pygmies have a rich folk music heritage. A diverse rhythmic structure, as well as polyphony...

Early historyDesertification drove hunter-gatherer cultures south into the Sahel areas of northern Central Africa about 10,000 years ago, when some people settled and started farming as part of the Neolithic Revolution. Farming of white yam was followed by millet and sorghum, and around 3000 BC, the domestication of African...

Stay Safe in Central African RepublicNorthern regions are affected by hot, dry, dusty harmattan winds. Flooding is frequent.Bribes will be demanded by police at checkpoints; anticipate no less than USD5; there are many allegations that a journey from the Cameroon border to Bangui would cost hundreds of US dollars...