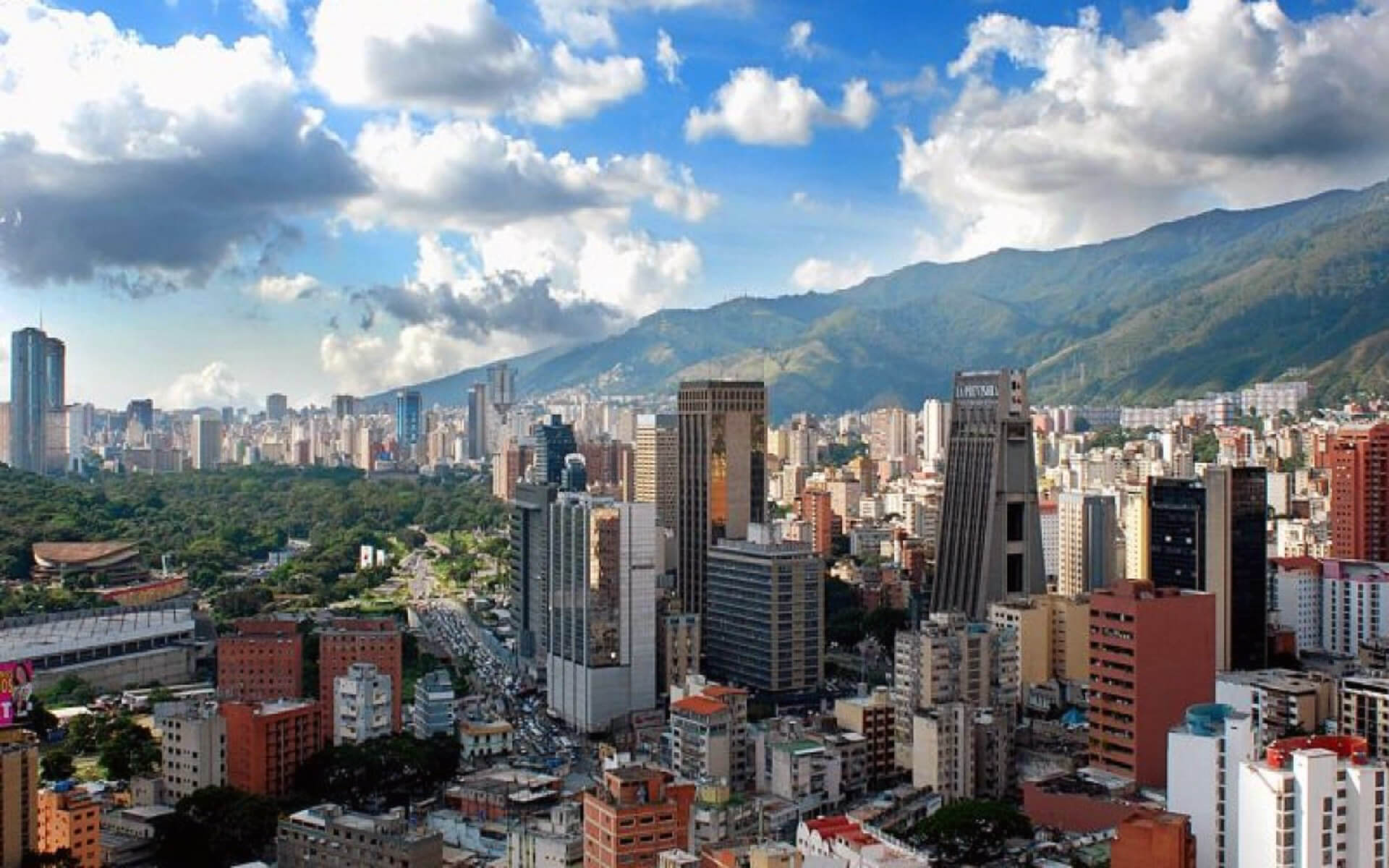 Caracas, formally Santiago de León de Caracas, is Venezuela’s capital city, the hub of the Greater Caracas Area, and the country’s biggest metropolis. Caracas is situated in the northern section of the nation along the Guaire River, following the contours of the small Caracas Valley on Venezuela’s coast mountain range (Cordillera de la Costa). Between 760 and 910 meters (2,490 and 2,990 feet) above sea level is good construction terrain. The valley lies next to the Caribbean Sea, separated from it by a steep 2,200-metre-high (7,200-foot) mountain range known as Cerro El vila; to the south, more hills and mountains exist.

The Metropolitan District of Caracas consists of five municipalities: Libertador, the main administrative division of the Venezuelan Capital District, and four additional municipalities located within Miranda State: Chacao, Baruta, Sucre, and El Hatillo. Libertador is home to numerous government facilities and serves as the Capital District (Distrito Capital). As of 2011, the Distrito Capital had a population of 2,013,366 residents, while the Caracas Metropolitan District had a population of 3,273,863 residents (2013). Caracas Metropolitan Region is predicted to have a population of 5,243,301.

The city is home to a variety of businesses, including service firms, banks, and shopping complexes. Apart from limited industrial activity in its metropolitan region, it has a predominantly service-based economy. Caracas is home to the Caracas Stock Exchange and Petróleos de Venezuela (PDVSA). PDVSA is Venezuela’s biggest enterprise. Caracas is also the cultural hub of Venezuela, with an abundance of restaurants, theaters, museums, and shopping malls. Caracas is home to many of Latin America’s highest structures.

Venezuela and its capital, Caracas, are said to have among of the world’s highest per capita murder rates, with 116 killings per 100,000 residents. The majority of homicides and other violent crimes remain unsolved. The impoverished areas that dot the hills around Caracas are always perilous.

Venezuela’s urban character may be gleaned mostly from a knowledge of Caracas, the country’s major city.

Caracas is not one of Venezuela’s most popular tourist sites, and visitors often avoid the capital city in order to explore the country’s incredible natural wonders. However, Venezuela’s capital may be an enthralling place to visit, with superb art, cuisine, and a vibrant nightlife.

Caracas is nestled in a lush valley, dominated by Mount Avila, a massive peak that divides the city from the Caribbean Sea and determines the majority of the city’s environment. It is a popular weekend destination for city inhabitants (known as Caraqueos) and is readily accessible through a highly modern cable car that connects the mountain base to the recently nationalized Waraira Repano park at the summit.

Caracas exemplifies the huge wealth disparities that define Venezuela’s economic condition. They vary from very impoverished “barrios” in the city’s western hills to the contemporary commercial center of El Rosal and even the opulent mansions in the city’s wealthy eastern districts.

The city’s streets and roads are always congested with automobiles, since Venezuela has the world’s cheapest fuel (about $0.12/gallon). Subsidized fuel and insufficient infrastructure have contributed to pollution and long traffic jams on almost all inner city highways. Caracas’ subway system, formerly regarded as one of the greatest in Latin America, is still efficient but sometimes congested and subject to delays.

Visitors should be informed that Caracas remains one of the world’s most dangerous cities, with significant sections practically off-limits to visitors. On weekends, murder counts of up to twenty are not unusual, therefore exercising care and common sense – particularly at night – is critical for a safe stay.

Caracas is a cosmopolitan city renowned for its cuisine. It has restaurants and pubs influenced by the cuisines of a variety of various nations and cultures, owing to the massive influx of immigrants from Europe and the Middle East after World War II.

Due to security concerns, the city is densely packed with “centros comerciales” and department shops, as well as prominent restaurants and nightclubs housed in tall malls. The city’s young, wealthy, and attractive congregate in the San Ignacio Mall to drink whiskey, and the “Las Mercedes” and “La Castellana” neighborhoods are also famous late-night hangout locations.

People often party until 4 or 5 a.m., so it’s best to grab a taxi before going out.

Caracas has a tropical savanna climate, according to the Köppen climatic classification (Aw). Caracas is also intertropical, with annual precipitation ranging from 900 to 1,300 millimeters (35 to 51 inches) in the city proper to 2,000 millimeters (79 inches) in certain areas of the Mountain range. While Caracas lies in the tropics, its height prevents temperatures from being nearly as high as they are in other tropical areas at sea level. The annual average temperature is roughly 23.8 °C (75 °F), with the coldest month (January) averaging 22.8 °C (73 °F) and the hottest month (July) averaging 25.0 °C (77 °F), resulting in a very modest annual thermal amplitude of 2.2 °C (4.0 °F). In December and January, dense fog may emerge, along with a sharp overnight temperature drop to 8 °C (46 °F). The indigenous people of Caracas refer to this strange weather as the Pacheco. Additionally, nighttime temperatures are typically substantially cooler (14 to 20 °C) than daytime highs and seldom exceed 24 °C (75 °F), resulting in quite comfortable evening temperatures. Hail storms occur in Caracas on an infrequent basis. Due to the city’s location in a narrow valley and the orographic activity of Cerro El vila, electrical storms are significantly more common, particularly between June and October. Caracas’s record extremes have been recorded to reach a low of 6 °C (43 °F) and a high of 35.5 °C (95.9 °F) at other city’s stations.

Caracas is totally confined inside a valley of Venezuela’s central range, separated from the Caribbean coast by about 15 kilometers (9 miles) of El vila National Park. The valley is quite tiny and somewhat uneven in shape; its elevation above sea level ranges between 870 and 1,043 meters (2,854 and 3,422 feet), with the historic zone at 900 meters (3,000 feet). This, along with the city’s fast population increase, has had a major effect on the city’s urban development. The highest point in the Capital District, which includes the city, is the Pico El vila, which stands at 2,159 meters (7,083 feet). The Guaire River, which runs through Caracas, drains into the Tuy River, which is also supplied by the El Valle and San Pedro rivers, as well as several tributaries that originate in El Vila. The city receives water from the La Mariposa and Camatagua reservoirs. Occasionally, the city is struck by earthquakes, most notably in 1641 and 1967.

Among the businesses found here are service firms, banks, and shopping malls. Apart from limited industrial activity in its metropolitan region, it has a predominantly service-based economy. Caracas is home to the Caracas Stock Exchange and Petróleos de Venezuela (PDVSA). The PDVSA is Venezuela’s biggest firm and is responsible for negotiating all international petroleum distribution and export agreements. The airline Viasa had its headquarters at the Torre Viasa throughout its existence.

Milla de Oro, situated north of the Baruta municipality and south of the Chacao municipality, is Caracas’ core business sector. It is one of the greatest financial districts in Latin America, home to several corporations and dominated by multiple high-rises. Plaza Venezuela, the Parque Central Complex, and El Recreo are all significant commercial areas.

The economy of Caracas is fueled by small and medium-sized industries. The city serves as the link between the metropolitan region and the rest of the nation, providing communication and transportation facilities. Chemicals, textiles, leather, food, iron, and wood products are all significant industries in Caracas. Additionally, there are rubber and cement industries. Its nominal GDP is 69 billion dollars, and its nominal GDP per capita is $24,000.

Numerous “Centros de Conexiones” are available for making local and international calls. Additionally, the number of internet cafés is increasing.