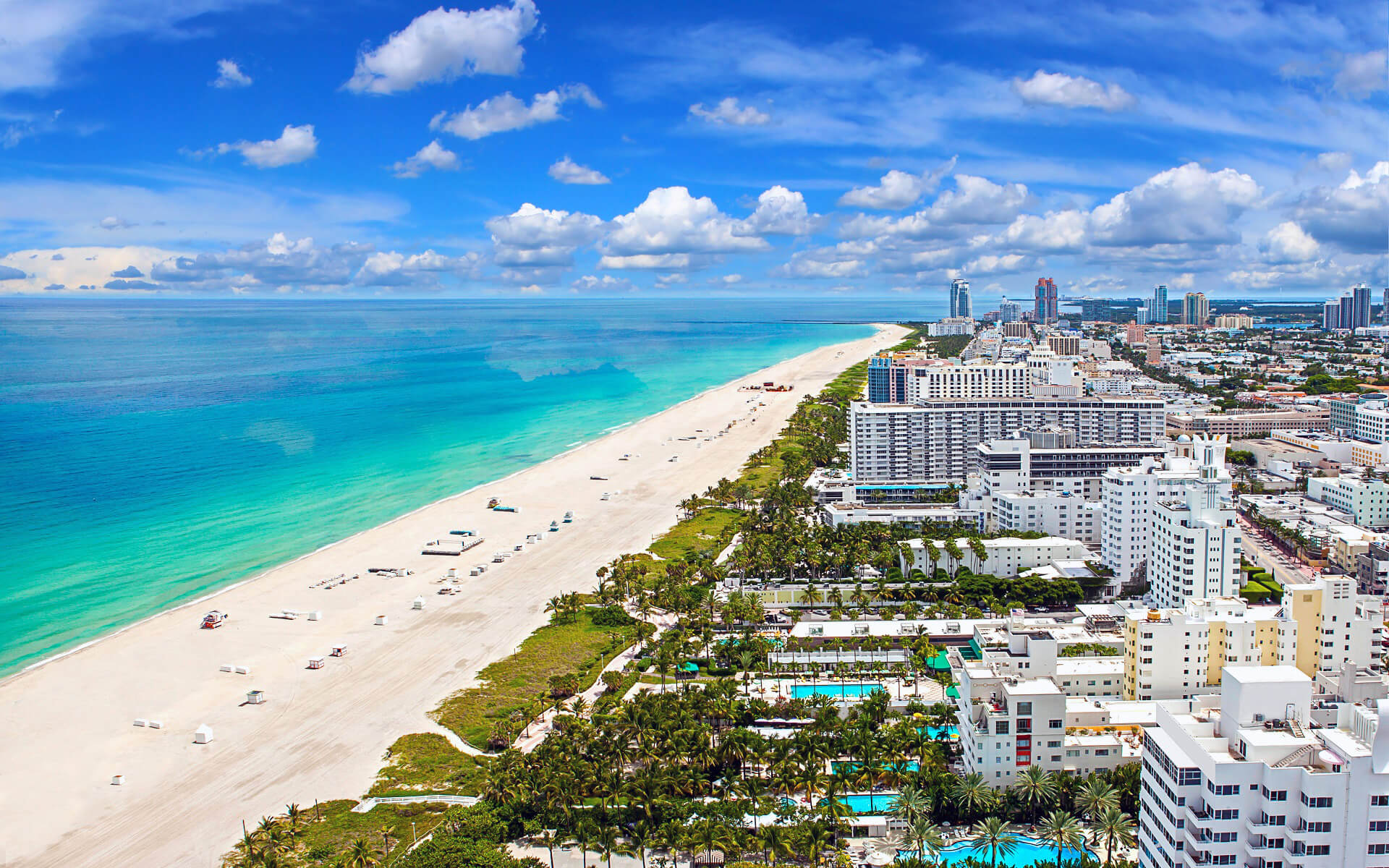 Miami Beach is a coastal resort city in the United States of America’s Miami-Dade County. On March 26, 1915, it was incorporated. The municipality is built on a series of natural and man-made barrier islands between the Atlantic Ocean and Biscayne Bay, which divides the Beach fromMiami. South Beach, which encompasses the southernmost 2.5 square miles (6.5 km2) of Miami Beach, combined with downtown Miami and the Port of Miami, together comprise South Florida’s commercial core. Miami Beach has a total population of 87,779 residents as of the 2010 census. Since the early twentieth century, it has been one of America’s preeminent beach resorts.

The Art Deco Historic District of Miami Beach was added to the National Register of Historic Places in 1979. The Art Deco District is home to the world’s biggest collection of Art Deco architecture, with hundreds of hotels, flats, and other buildings constructed between 1923 and 1943. The District is influenced by Mediterranean, Streamline Moderne, and Art Deco styles. The Historic District is defined on the east by the Atlantic Ocean, on the west by Lenox Court, on the south by 6th Street, and on the north by Dade Boulevard running beside the Collins Canal. Barbara Capitman, a former interior designer who now has a street named after her, spearheaded the effort to conserve the Art Deco District’s architectural legacy.

Miami Beach is a municipality in the state of Florida. This little barrier island near Miami was cleared of mangroves in the late 1800s to create space for a coconut field. In 1915, real estate investors established it as a city. For over a century, Miami Beach has been one of America’s preeminent beach resorts.

Miami Beach, like Miami, has a sizable Latin American population, and Spanish is often spoken in everyday conversation in numerous locations. English is, nonetheless, the preferred language, especially when interacting with companies and government. Spanglish, a mash-up of English and Spanish, is a very typical occurrence, with multilingual residents bouncing back and forth between the two languages mid-sentence. The indigenous Latin population is mostly composed of Cuban exiles (who have now become second and third generation residents), with South Americans from a variety of nations gaining footing. Additionally, there is a sizable Haitian population, and several signage and public announcements are in English, Spanish, and Creole.

Miami Beach has a long history as a cutting-edge arts destination, from the world-famous nightclubs of the 1950s to the thriving cultural scene of current South Beach. Today, Miami Beach’s entertainment, production, and artistic sectors are stronger than ever.

This magnificent city is home to art museums, ballet performances, cultural events, and entertainment. The Art Center at Lincoln Road hosts exhibits of performance art and offers lectures and workshops in areas such as photography, jewelry-making, and painting.

Miami Beach, despite its being north of the Tropic of Cancer, has a tropical climate, more precisely a tropical monsoon climate (Köppen Am), with hot humid summers and mild, comparatively dry winters. Miami Beach, with the exception of the Florida Keys, has the warmest winter climate in the United States (mainland). From November to April, the warm and sunny weather in Miami Beach and South Florida draws millions of visitors from across the globe. Sea surface temperatures vary from 74 to 86 degrees Fahrenheit in the winter through spring/summer/fall. Miami Beach boasts the warmest ocean surf in the continental United States each year.

Miami Beach, like most of Florida, has a distinct wet and dry season. The tropical rainy season lasts from May to September, and is marked by showers and late-day thunderstorms. November through April is the dry season, with few rains, plenty of sunlight, and low humidity. However, Miami Beach’s island position results in fewer convective thunderstorms, resulting in less rainfall in a given year than surrounding regions such as Miami and Fort Lauderdale. Miami Beach’s proximity to the Atlantic’s moderating impact results in cooler highs and warmer lows than inland locations of Florida. Apart from the Florida Keys (and Key West), Miami Beach is the only city in the continental United States to have never reported snow flurries in its weather records.

Miami Beach’s position on the Atlantic Ocean, close to the point where it meets the Gulf of Mexico, makes it very susceptible to hurricanes and tropical storms. Though direct hurricane strikes are uncommon (Miami has been directly hit by only two major hurricanes in recorded weather history – the 1926 Miami hurricane and Hurricane Cleo in 1964), the area has been indirectly impacted by hurricanes Betsy (1965), Inez (1966), Andrew (1992), Irene (1999), Michelle (2001), Katrina (2005), and Wilma (2005).

Apart from the current challenges associated with below-grade construction, certain regions of southern Florida, particularly Miami Beach, are starting to design for sea level rise and other future repercussions of climate change. This comprises a five-year, $500 million effort to construct 60 to 80 pumps, larger sea barriers, and physical elevation of road asphalt levels, as well as potential zoning and building code amendments that might ultimately result in upgrading current and historic sites. Certain roads in Miami Beach flood on sunny days during the annual king tides, though some argue this has been the case for decades, as portions of the western side of South Beach are nearly 0 feet (0 m) above normal high tide, with the city as a whole averaging only 4.4 feet (1.3 m) above mean sea level (AMSL). However, a recent research conducted by the University of Miami revealed that tidal flooding became much more prevalent in the mid-2000s. King tides in the autumn of 2015 surpassed expectations in terms of duration and height. Certain roadways and walkways have been elevated around 2.5 feet (0.76 m); the four first pumps installed in 2014 have a capacity of 4,000 US gallons per minute. Due to the porous nature of the earth and the limestone under the surface, traditional sea level rise and storm mitigation methods such as sea walls and dykes, such as those in the Netherlands and New Orleans, may not function in South Florida.