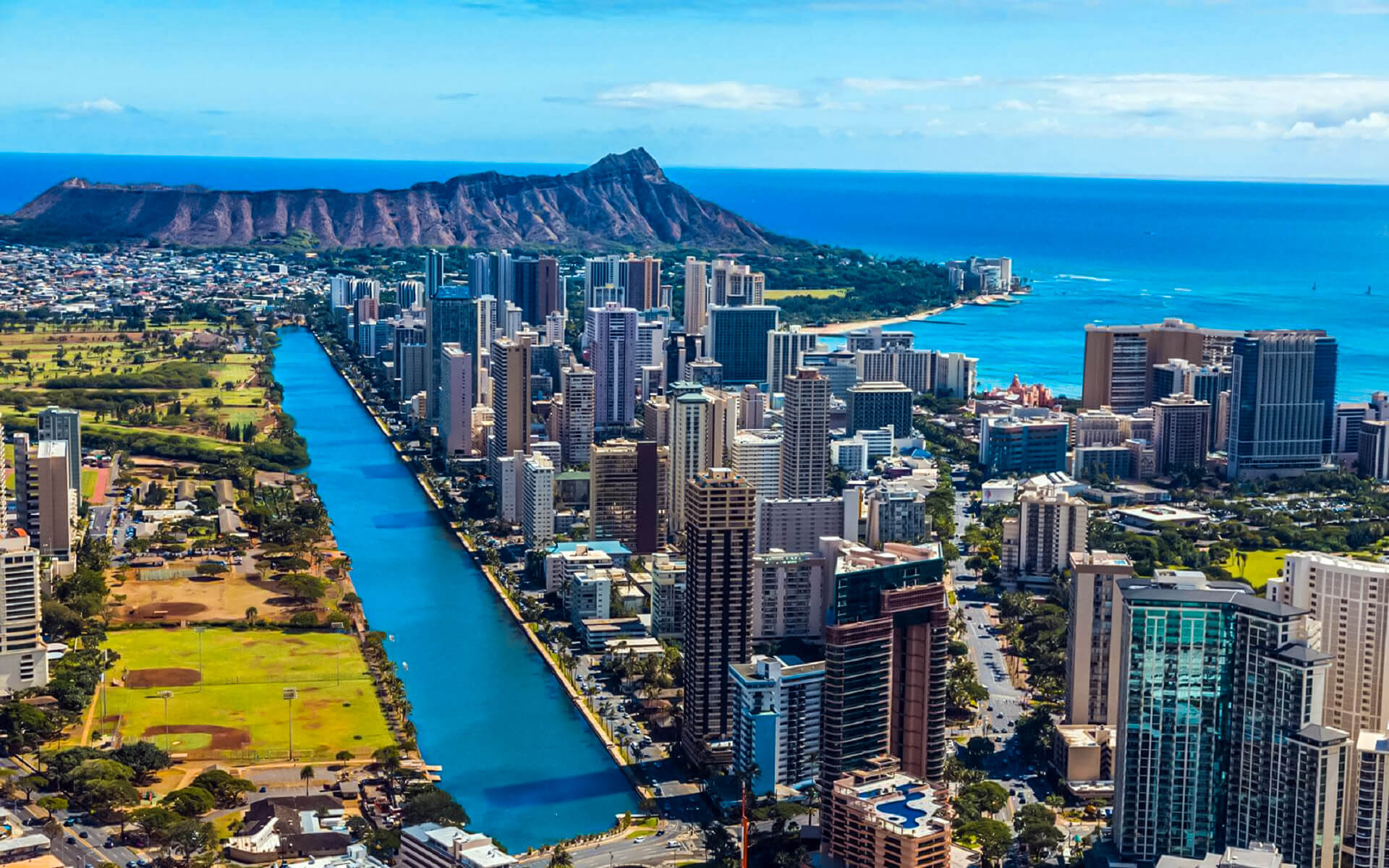 Honolulu is the state capital and the most populous city of Hawaii, located in the United States. On the island of Oahu, it is the county seat of the City and County of Honolulu. Honolulu is the principal entrance to Hawaii as well as a significant entry point into the United States. The city is also a significant worldwide corporate and military defense center, as well as the home of a broad range of east-west and Pacific culture, food, and customs.

Honolulu is Hawaiian for “sheltered harbor” or “calm port.” The original name was Kou, a district comprising the region approximately including the area from Nuuanu Avenue to Alakea Street and from Hotel Street to Queen Street, which is the hub of the current downtown sector. Since 1845, the city has served as the capital of the Hawaiian Islands, and it acquired historical significance during Japan’s assault on Pearl Harbor, which occurred near the city on December 7, 1941.

Honolulu was rated high on international livability rankings in 2015, and it was also regarded as the second safest city in the United States. It is also the most populous Oceanian city outside of Australasia, and the second most populous city in Polynesia, behind only Auckland.

Honolulu, Hawaii’s capital and principal port of entry, is by far the state’s biggest metropolis, home to roughly one million people—two-thirds of the state’s population. Honolulu, located on the island of Oahu’s southern coast, serves as the state’s seat of government and business, as well as the location of the Hawaiian Islands’ main airport and the state’s most well-known tourist attraction, Waikiki Beach.

Given the city’s size and popularity as a tourist attraction, this is not the place to go for a “get-away-from-it-all” Hawaiian vacation. Honolulu is a fast-paced and vibrant metropolis, with all the difficulties that come with it, such as excessive traffic, crime, and homelessness. However, Honolulu retains the laid-back atmosphere and culture of the islands, with some of Hawaii’s best museums, the historic sites of Pearl Harbor and former Hawaiian royal palaces, splendid beaches, and striking natural scenery, all set amidst a dynamic mix of cultures hailing from all corners of the Pacific Ocean.

Obviously, when most people think of beaches in Hawaii, they think of the world-famous Waikiki Beach. This pristine sand beach, flanked by hotels with Diamond Head as a background, is arguably the most popular of the Hawaiian Islands. Waikiki is popular with a broad range of people since it’s a terrific area for swimming, sunbathing, catamaran and outrigger canoe rides, and it’s also a great site for novice surfers and body boarders (and there are plenty of surf schools set up in Waikiki for lessons). Surprisingly, even in Waikiki, you can find a somewhat peaceful beach; you just have to know where to look.

However, if you really need to get away from the throng, there are plenty of alternative beaches to choose from. Ala Moana Park, near Downtown, is a green place with lots of trees and grass, as well as a fine sandy beach that’s popular with residents and ideal for families or a quieter swim.

The region around Makapu’u Point in Eastern Honolulu includes numerous great beaches, the most popular of which being Hanauma Bay, which is located in the crater of an extinct volcano that is now exposed to the sea and surrounded by a coral reef. This is not a good area for a swim, and it is surely not a suitable site for surfing, but the calm water and profusion of marine life make it ideal for snorkeling and scuba diving. Even if you don’t swim, the environment makes it a fantastic area to sunbathe or picnic, however parking may be a difficulty.

The Halona Beach Cove, also known as “the Peering Place,” is located near Hanauma Bay. It’s a tiny, rocky cove with wonderful swimming when the surf is quiet, but there are no lifeguards here, so swim at your own risk. Sandy Beach, which is nearby, has lifeguards and has been popular with surfers and bodyboarders for decades. On a calm day, it might make for a pleasant day of swimming. Just a bit farther up the road, Makapu’u Beach is pretty beautiful. It has quite high waves, so it’s not the ideal spot to swim but it’s a terrific area to surf.

The only discernible seasonal fluctuation is in the amount of rainfall. Honolulu is located on the sunny, leeward side of the island, and where you are in the city will affect the chances of rain – areas like Waikiki, downtown, and the western side of the city will usually be sunny, whereas the hills or eastern side of the city may get some passing clouds and very brief rainfall. Honolulu receives less than half an inch of rain in the summer and almost three inches in the winter.

Honolulu is the world’s most distant large metropolis. The Point ArenaLighthouse in California is the closest mainland site to Honolulu, at 2,045 nautical miles (3,787 km). (Nautical boats will need to go an extra distance to round Makapuu Point.) However, a portion of Alaska’s Aleutian Islands is closer to Honolulu than the mainland.

Honolulu, the Hawaiian Islands’ main city and airport, serves as a natural entrance to the islands’ thriving tourist sector, which attracts millions of visitors and contributes $10 billion to the local economy each year. Honolulu’s Pacific position also makes it a major economic and trade center, notably between the East and the West. Military defense, research and development, and manufacturing are other key parts of the city’s economy.

Honolulu’s average rent increased by 4.5 percent in 2009, keeping it as the second most costly rental market among 210 U.S. metropolitan regions.

Because there are no national bank chains with branches in Hawaii, many tourists and new residents utilize a variety of banks. First Hawaiian Bank is Hawaii’s biggest and oldest bank, with headquarters in the First Hawaiian Center, the state’s tallest structure.