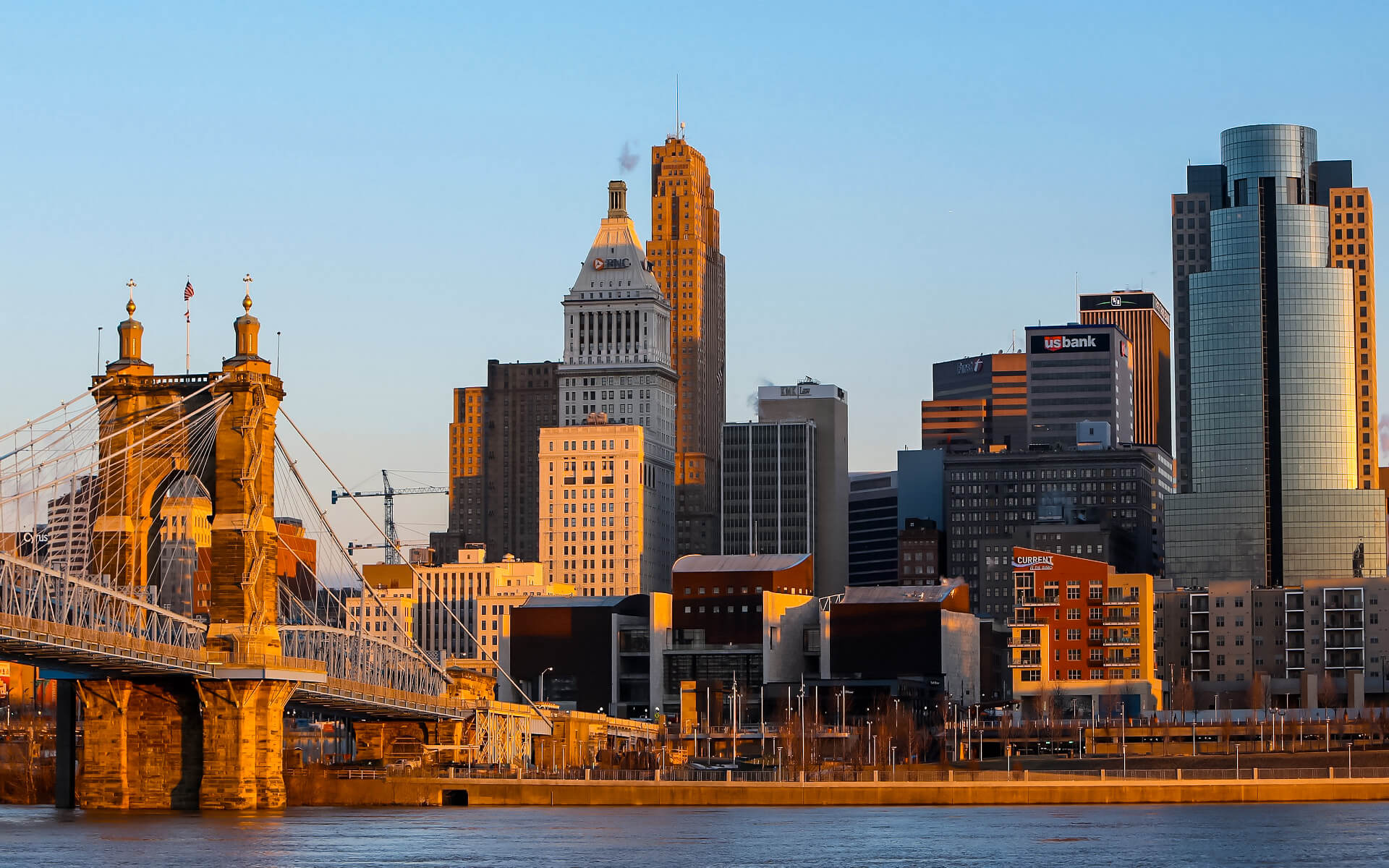 Cincinnati is a city in the United States of America’s state of Ohio. It is the county headquarters of Hamilton County. The city was founded in 1788 and is situated on the north bank of the Licking River’s confluence with the Ohio River. The latter forms the state line between Ohio and Kentucky. Cincinnati is the third biggest city in Ohio and the 65th largest city in the United States, with a population of 298,165 people (2014), making it the 28th largest Metropolitan Statistical Area (MSA) in the country and the largest in Ohio. Additionally, the city is included in the larger Cincinnati–Middletown–Wilmington Combined Statistical Area (CSA), which had a 2010 population of 2,172,191.

Cincinnati was an American boomtown in the early nineteenth century, rivaling the major coastal towns in size and riches. Throughout much of the nineteenth century, it was listed among the top ten largest cities in the United States by population, only to be surpassed by New Orleans and the older, established settlements of the Eastern Seaboard; at one point, it held the title of America’s sixth-largest city for a period spanning consecutive census reports from 1840 to 1860. It was by far the westernmost city. Cincinnati is frequently referred to be the first completely “American” metropolis since it was the first major American city created after the American Revolution and the first large inland city in the nation.

Cincinnati grew with less European immigration and impact than eastern cities did during the same era; yet, it drew a sizable number of German immigrants who created many of the city’s cultural organizations. By the late nineteenth century, with the transition from steamboats to railways, trade patterns had shifted, and Cincinnati’s development had slowed significantly. Other inland towns, especially Chicago, which built on commodities exploitation and railways, and St. Louis, which served as the gateway to westward migration for decades after the Civil War, overtook the city in population.

Cincinnati is home to two major professional sports teams: the Cincinnati Reds, Major League Baseball’s oldest club, and the National Football League’s Cincinnati Bengals. The University of Cincinnati, established in 1819, is one of the major universities in the United States, ranking in the top 50. Cincinnati’s historic architecture is well-known. Cincinnati was sometimes referred to as “Paris of America” in the late nineteenth century, owing to such ambitious architectural endeavors as the Music Hall, Cincinnatian Hotel, and Shillito Department Store.

Cincinnati is Ohio’s third biggest city and metropolitan area, located on the north bank of the Ohio River in Southwest Ohio.

Cincinnati is unique in comparison to other Midwestern cities. Its culture is a synthesis of the Northeast, the Old South, the Midwest, and Appalachia, with a strong German-Catholic ancestry. It was one of the first boomtowns in the United States, and the Over-the-Rhine area is the country’s biggest National Historic District. Today, it is a part of a rapidly expanding metro region and is home to an extraordinary fusion of industry and architecture. Downtown Cincinnati is bordered by gorgeous foothills that provide a stunning background for the Queen City and her fabled skyline, which is featured in the opening credits of the television program WKRP in Cincinnati.

Summer and October are the busiest visitor seasons. If you travel in the winter or early spring, keep in mind that certain activities and attractions may have limited hours or may be closed entirely. Due to Cincinnati’s closeness to the Bible belt, an unexpected number of establishments are closed on Sundays, including many of the eateries in Over-The-hippest Rhine’s restaurant section on Vine Street. Check the hours before venturing out on Sunday.

Cincinnati’s city core is referred to as “Downtown,” and is sometimes referred to as the “Central Business District.” With several significant attractions and business offices situated here, this sector serves as the focal point of the region.

When seen from Devou Park in northern Kentucky, Mount Echo near Price Hill, or Eden Park and adjoining Mt. Adams, the Cincinnati cityscape is breathtaking—especially at night.

Cincinnati is divided into four main seasons. Winters are variable in severity, while summer and early autumn are hot and humid.

Generally, just a few snowy days hamper driving on the city’s steepest routes. Snow is a significant worry in Northern Kentucky, however, because to the higher quantity of hills and rural roads, which are not cleaned as rapidly as those in Southwest Ohio. If you want to drive or travel through Northern Kentucky during a snowstorm, use great caution and call ahead to ensure that your location is accessible.

Cincinnati, a large metropolis in the Ohio Valley, is located on the north bank of the Ohio River in Hamilton County, the state of Ohio’s extreme southwestern county. It is located in the middle of the river between Pittsburgh, Pennsylvania and Cairo, Illinois. The city is located just across from the mouth of theLicking River, which had a significant role in its location.

Cincinnati’s central business district encompasses portions of southern Ohio and northern Kentucky. The city has a total area of 79.54 square miles (206.01 km2), of which 77.94 square miles (201.86 km2) is land and 1.60 square miles (4.14 km2) is water, according to the United States Census Bureau. The city is set on a series of hills, bluffs, and low ridges overlooking the Ohio River in Kentucky’s Bluegrass area. Cincinnati is situated in the Midwest, on the extreme northern outskirts of the Upland South. Two-thirds of the population in the United States lives within a day’s drive of a metropolis.

This topography is often utilized for recreational purposes. The Steps of Cincinnati transport passengers up and down the city’s several hills. Along with its utilitarian purpose of connecting hillside communities, the 400 stairways give breathtaking vistas of the Cincinnati region to tourists.

Cincinnati is home to various major firms, including Procter & Gamble, The Kroger Company, and Macy’s, Inc. Kroger, the city’s biggest employer, employs 17,000 people. With 15,162 workers, the University of Cincinnati is the second biggest.