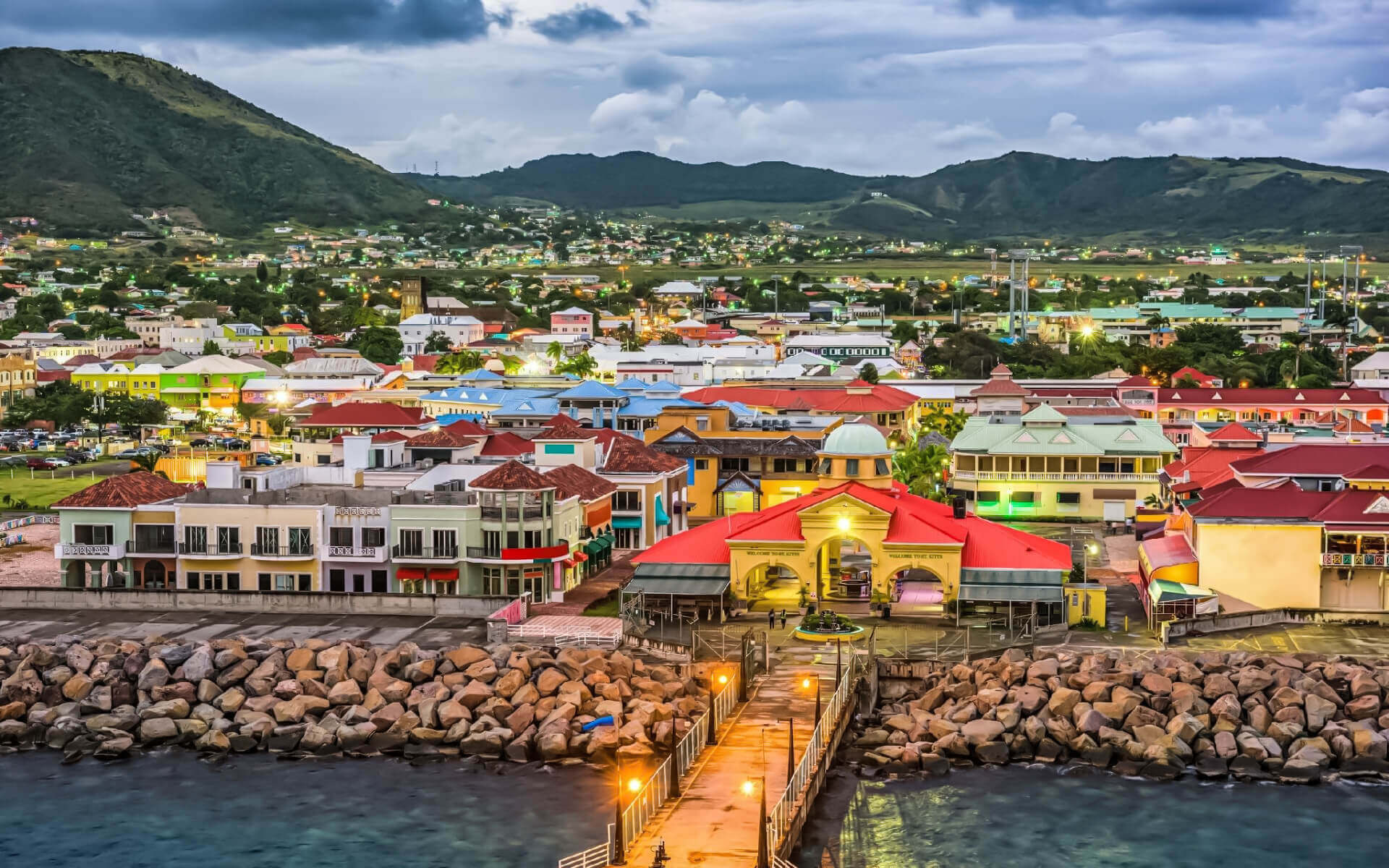 The Federation of Saint Kitts and Nevis, sometimes referred to as the Federation of Saint Christopher and Nevis, is a West Indies two-island nation. It is the smallest sovereign state in the Americas, both in terms of size and population. It is located in the Leeward Islands group of the Lesser Antilles. The nation is a Commonwealth realm, with the British monarch as head of state (now Queen Elizabeth II).

Basseterre is the capital city on the larger island of Saint Kitts. The tiny island of Nevis is located about 2 miles (3 kilometers) southeast of Saint Kitts, separated by a narrow waterway known as “The Narrows.”

Anguilla, a British colony, was formerly included in this union, which was referred to collectively as Saint Kitts-Nevis-Anguilla. The islands of Sint Eustatius, Saba (Netherlands), Saint Barthélemy, Saint-Martin/Sint Maarten, and Anguilla are located north-northwest. Antigua and Barbuda are to the east and northeast, while the tiny uninhabited island of Redonda and Montserrat, which presently has an active volcano (see Soufrière Hills), are to the southeast.

The country consists of two main islands, St. Kitts and Nevis. The highest peak is Mount Liamuiga in St. Kitts at 1,156 metres.

The islands are volcanic in origin, with large central peaks covered by rainforest; the steeper slopes leading to these peaks are mostly uninhabited. Most of the population of both islands live closer to the sea, where the terrain becomes flatter. Numerous rivers flow down from the mountains on both islands, providing fresh water for the population. St. Kitts also has a small lake, a salt pond.

The national bird is the brown pelican.

In July 2000, the population was 42,696, with an average life expectancy of 72.4 years. Emigration has historically been very high, and these high levels have led to a steady decline in the country’s population of about 25 % since the peak of about 51,100 in 1960.

Emigration from St Kitts and Nevis to the United States :

St. Kitts and Nevis is a federation of twin islands whose economy is characterised by the predominance of tourism, agriculture and light industry. Sugar has been the main export product since the 1940s, but rising production costs, low world market prices and government efforts to reduce dependence on sugar have led to increasing diversification of the agricultural sector. In 2005, the government decided to close the state-owned sugar company, which had been making losses and contributing significantly to the budget deficit.

Former sugar plantations dominate the landscape of St. Kitts. Many sugar cane fields are being burnt to make way for land development, especially in the north of the island, in the parishes of Saint John Capisterre and Christchurch. The agriculture, tourism, export-oriented manufacturing and offshore banking sectors are growing and now play a larger role in the country’s economy. The growth of the tourism sector has become the main source of foreign exchange for Saint Kitts and Nevis. The country has also developed a thriving garment assembly industry and one of the largest electronic assembly industries in the Caribbean.

St. Kitts relies on tourism to boost its economy. Tourism on the island has been growing since 1978. 587,479 people came to St. Kitts in 2009, up from 379,473 in 2007. This growth represents an increase of almost 40 percent in two years. With the growth of tourism, the demand for holiday real estate is also increasing.

In an effort to develop tourism, St. Kitts hosts its annual music festival.

St Kitts and Nevis also acquires foreign direct investment through its citizenship-by-investment programme, which is outlined in its Citizenship Act 1984. Interested parties can acquire citizenship if they pass a government background check and make an investment in an approved real estate project.

English is the only official language. St. Kitts Creole is also widely spoken.St Kitts and Nevis is known for a number of musical celebrations, including Carnival (18 December to 3 January in St Kitts). The last week of June is dedicated to the St Kitts Music Festival, while Culturama...