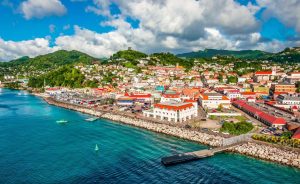 Although the French influence on Grenadian culture is much less visible than on other Caribbean islands, French family and place names remain, and everyday language is peppered with French words and the local dialect, or patois. A stronger French influence is found in the well-seasoned food and cooking styles similar to those of New Orleans, and some French architecture survives from the 1700s. The island’s culture is strongly influenced by the African roots of most Grenadians, but Indian and Caribbean influences are also visible in the cuisine with dhal puri, rotis, Indian sweets, cassava and curries.

Oildown” is considered the national dish. The name refers to a dish that is cooked in coconut milk until all the milk is absorbed, leaving a little coconut oil at the bottom of the pan. Early recipes call for a mixture of salted pig’s tail, pig’s feet (trotters), salted beef and chicken, flour dumplings and foods such as breadfruit, green banana, yam and potatoes. Callaloo leaves are sometimes used to hold the steam and add extra flavour.

Soca, calypso and reggae set the mood for Grenada’s annual carnival activities. Over the years, rap music has become famous among Grenadian youth and many young rappers have emerged in the island’s underground rap scene. Zouk is also slowly making its way to the island. The African and Caribbean Indian heritage of the islanders plays an influential role in many aspects of Grenadian culture.

As in other Caribbean islands, cricket is the most popular national sport and an integral part of Grenadian culture. The Grenada national cricket team is part of the Windward Islands cricket team in regional national cricket, but plays as a separate entity in smaller regional matches. It has also played Twenty20Cricket in the Stanford 20/20.

By air Maurice Bishop International Airport (IATA: GND) is located on the main island of Grenada, on a peninsula in the extreme southwest of the Point Salines region. It is about 6 km from the capital St. George's. Delta (New York JFK, Atlanta), British Airways, American Eagle, American Airlines, Monarch,...

The city centre has many narrow and hilly streets. Drivers are very careful, but caution is advised as some streets have very narrow or no pavements. The town also has the most picturesque horseshoe harbour in the Caribbean, with restaurants, shops and supermarkets. During the winter cruise season (between November...

A valid passport and a return or onward ticket are required. Citizens of the United States, Canada, the United Kingdom and its dependencies, British Commonwealth countries, Caribbean countries (except Cuba), Venezuela, European Union countries and their dependencies, Norway, Japan, Israel and Russia do not require a visa. Allowances - Personal...

Grenada produces many amazing products. Rum, chocolate, honey, jams and jellies, spices, clothing and art. Many of them are award-winning. Support the local economy when you are on the island and buy local products to take home. Nutmeg is Grenada's cash crop, so be sure to bring some home in...

The climate is tropical: hot and humid during the rainy season and cooled by trade winds during the dry season. Grenada, which lies on the southern edge of the hurricane belt, has experienced only three hurricanes in fifty years. Hurricane Janet passed over Grenada on 23 September 1955 with winds...

Stay Safe in Grenada Grenada is a safe country and has the lowest crime rate in the Caribbean. The tropical sun and high humidity deserve your utmost respect. Take bottled water with you when you go out. The danger to pedestrians on pavements and narrow streets can be greater than...