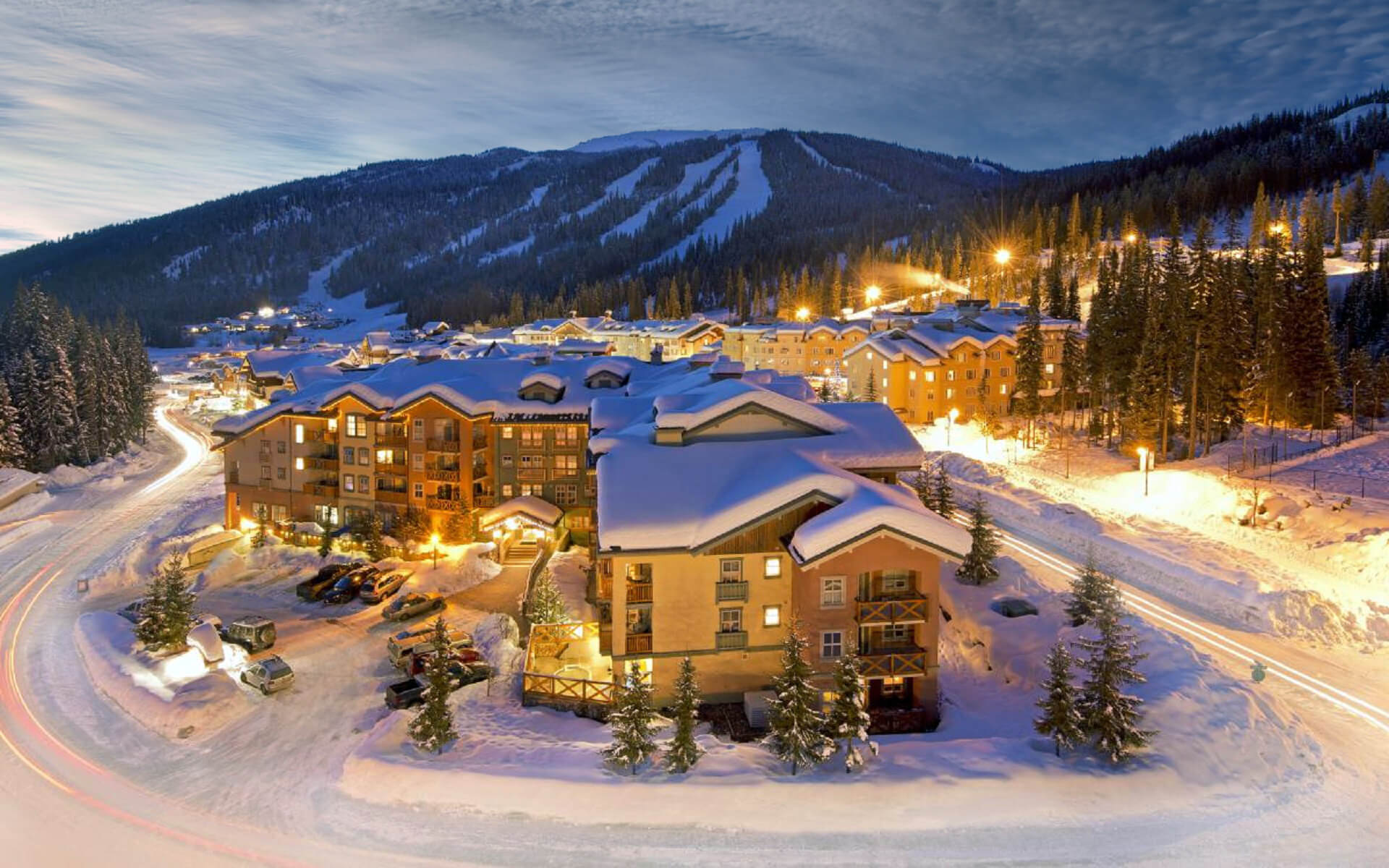 Sun Peaks is a community and ski resort in British Columbia, Canada, located near Kamloops. Almost everybody can find something to do all year. There is world-class skiing in the winter, as well as a variety of other winter activities. In the summer, the region transforms into a hiker’s and biker’s paradise, with mountain paths for explorers of all skill levels. For those who prefer a more “relaxed” holiday, there is an 18-hole golf course as well as several events and festivals.

The ski area’s summit lies at an elevation of 2,080 m (6,824 ft), with a vertical climb of 881 m (2,891 ft) from the foot of the mountain. Sun Peaks Resort offers 16 square kilometers (4,270 acres) of skiable terrain and averages 5.6 meters (220 inches) of snowfall per year. The resort features 12 lifts with a combined capacity of 12,000 riders per hour, with the Burfield chair being the longest with a total ride time of 23 minutes. There are 135 runs, 16 gladed areas, and 40 kilometers of cross country routes. The Sun Peaks region receives more than 2000 hours of sunlight every year. Tod Mountain, Sundance Mountain, and Mt. Morrisey are the three mountains that make up the ski area. The yearly snowfall of over six meters draws a large number of skiers and extends the season from November to mid-April.

Sun Peaks Resort is popular among families with children because to its abundance of activities for children, a ski school for all skill levels, big slopes, and simple skiing into the town.

Sun Peaks was once known as Tod Mountain. Since then, the ski resort has grown dramatically, with additional terrain, a purpose-built community, and contemporary amenities and services.

Sun Peaks’ three mountains ensure a good time for everyone, with plenty of greens, blues, and blacks, as well as some double black runs. Starting in the valley, you may tackle the intermediate Mt Morrisey first (5.495 ft). Take the Morrisey Express to hear Grand Return, Mid-life Crisis, and Still Smokin’, among other blues. Beginners may take the green Home Run track, which drops down into the valley. The Advanced Trails Tumble Dry and Lint Trap will be appreciated by experts. Further down the mountain, look for other Expert routes like Cover Shot or Spin Cycle.

Tod Mountain, with a height of 7.060 feet, is the highest of the three mountains in the resort. Begin with the Learning Zone at the mountain’s base. At the bottom, there are additional slopes for beginning skiers. By riding the Sunburst Express, you will have access to a plethora of beginner, intermediate, and expert runs. The same is true for the Burfield and Crystal chairlifts. The well-known Bowls can be located near the summit of the mountain and off the Burfield lift. To receive a top-to-bottom experience, beginners should take the shortest route down: 5 Mile. It is also the longest route in Sun Peaks and has spectacular vistas.

The Sundance Express transports you to the summit of Sundance Mountain (5.676 ft). Take a look at the various blues and blacks. The black Peek-a-Boo is a favorite among advanced skiers and snowboarders. Rambler is another another green run. You may either ski it down or switch to the East Village Ski Way for a longer detour back to the base.

Sun Peak’s top-to-bottom ten-acre Rockstar Energy Terrain Park has a plethora of options for jumps, rails, and boxes. Nancy’s 60-foot jump is perhaps the most prevalent reason freestylers come here. They open their doors early to assure the greatest powder throughout the season since they invest a lot of work into snowmaking.

Snow on the Sun Peaks

Sun Peaks doesn’t receive a lot of snow; it gets around 6 meters of snow every season, which is less than many other ski resorts in British Columbia. Snow usually falls in little quantities each storm rather than in large volumes.

The focus at Sun Peaks is on quality rather than quantity, and the powder that does fall is pleasantly dry. Snow retention between storms is also excellent owing to low sun exposure in the height of winter (despite its name!) and chilly temperatures due to its northerly location.

Because Mt Morrisey is north-facing, it has exceptionally high snow quality, which is especially noticeable in the spring. The most difficult terrain is in the Burfield region, which is south facing and receives roughly 30% less snow than the Morrisey area. This region may sometimes be lacking in shelter, which is especially noticeable among the trees. Because of the excellent summer grooming that eliminates stumps and boulders, snow cover is seldom a problem on the slope.

The Sun Peaks community has a variety of lodging options for 7,000 visitors. The European-style ski-through village’s layout makes things extremely simple. All Sun Peaks housing is close to the ski slopes, and many units have genuine ski-in/ski-out access.

The pedestrian town is adequately developed (it’s not as large as Whistler, but it’s larger than Silver Star or Big White) and offers excellent amenities for visitors on a snowboard or ski vacation. The village’s layout makes it simple to access to a ski rental store, child care, or ski school.

SunPeaks includes a variety of cafés, restaurants, and shopping options. There are a few pubs in the area, but don’t anticipate a lively party scene. Sun Peaks is mostly a family destination.

Sun Peaks has apres-ski, restaurants, and other activities.

Sun Peaks offers something for everyone; expert skiers and snowboarders will love the vast terrain during the day and then relax in the superb town and pubs at night. Bottoms Bar and Grill, Cahlity Creek Bar and Grill, Masa’s Bar and Grill, and Morrisey’s Pub are just a few of the establishments in Sun Peaks. Look out for open mic evenings at Morrisey’s for a fun evening, or head to Bottoms for apres and lively nights out.

Sun Peaks also has a variety of eating alternatives for all tastes, including Hoopla for pita wraps and gelato, Oya for the greatest sushi, Powder Hounds for a fantastic combination of German and Canadian cuisine, and Mountain High Pizza for takeout.

Sun Peaks ski vacations are a terrific option for families since it is a highly family oriented resort with many of amenities for children of all ages. To keep the kids engaged, there is a ski school, a childminding center, a Kids Ranch, and a Kids Adventure Park featuring snowmobile and tobogganing sports. As an added plus, Sun Peaks resort visitors may ski for free alongside Canada’s very own Nancy Greene on their ski vacations.