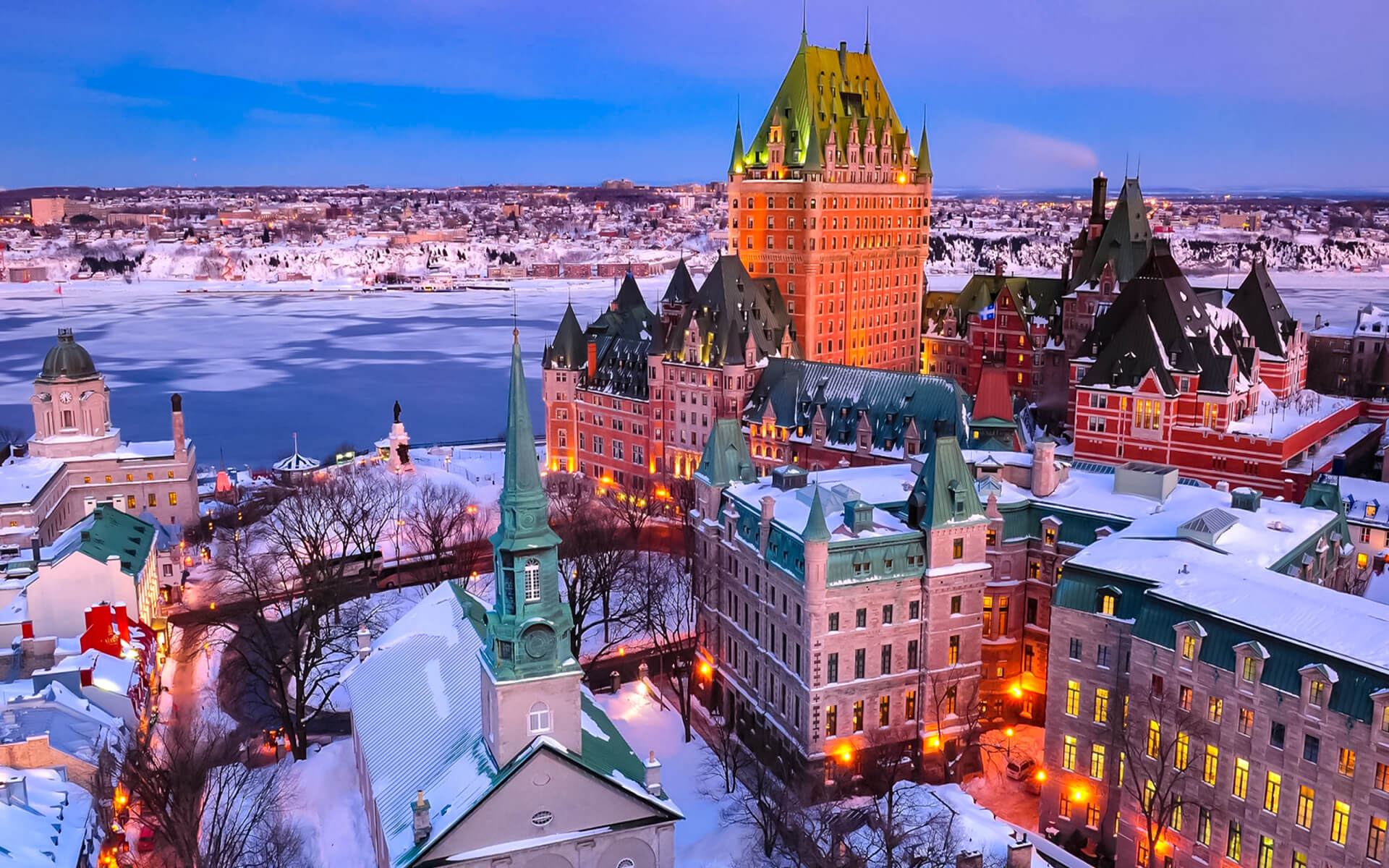 Quebec City is the capital of Quebec, a Canadian province. Quebec City’s Old Town, perched on cliffs overlooking the St. Lawrence Seaway, is a UNESCO World Heritage Site and one of only two towns in North America (the other being Campeche in Mexico) to retain its historic city walls. Quebec City has a population of around 700,000 people.

Quebec City is the provincial capital of Quebec (though it is referred to as the National Capital in the province). Much of the activity here is administrative and bureaucratic in nature, which would ordinarily make a city boring. Fortunately, the city has a great history, having served as New France’s stronghold capital since the 16th century. Although the town’s day-to-day life might be a touch drab at times, the bustling historical center is well worth a visit.

Quebec was colonized by Europeans for the first time in 1608 in a “abitation” commanded by Samuel de Champlain, and it celebrated its 400th anniversary in 2008. The dates of Champlain’s arrival in the city are usually agreed to be July 3rd and 4th, and they were honored with large festivities. Native peoples also lived in the region for many years before Europeans arrived, and their presence has been felt ever since.

Quebec was founded by the French to stake a claim in the New World, and the term initially applied only to the city. It is an aboriginal name meaning “where the river narrows,” referring to the significant narrowing of the St. Lawrence River immediately east of the city. It is perched on 200-foot-high cliffs with panoramic views of the Laurentian Alps and the St. Lawrence River. The fur and timber trades were the principal businesses during French control (1608-1759). In the Battle of the Plains of Abraham in 1759, the French lost the city and the whole colony of New France to the British. Because many of the French nobles returned to France, the British ruled over the remaining French people. Fortunately, the colonial authorities permitted the French to keep their language and religion, preserving much of the culture. During the Potato Famine of the 1840s, an influx of Irish immigrants occurred. Ships were confined at Grosse Ile, east of the city beyond l’Ile d’Orleans, due to cholera and typhus epidemics. The corpses of those who died on the trip and in quarantine are interred there. The city was under British control until 1867, when Lower Canada (Quebec) merged with Upper Canada (Ontario), New Brunswick, and Nova Scotia to become the Dominion of Canada.

Although French is the official language of the province of Quebec, English is commonly spoken as a second language by practically all of the workers in Quebec City’s tourist districts. It is also not uncommon to hear Spanish, German, and Japanese spoken at numerous Vieux Quebec restaurants. Outside of the tourist regions, some knowledge of French is recommended, and may be required, depending on how remote the area you are visiting. It should be noted that, although senior residents may struggle to maintain a conversation in English, most persons under the age of 35 should be able to converse in English. Less than one-third of the population is multilingual in French and English.

Both the city and the province are referred to as “Québec” in French. The context and the habit of referring to the province with the masculine article (“le Québec or au Québec”) and to the city without any article (“à Québec”) define which is intended. This might cause confusion while following provincial road signs since the City of Quebec (Ville de Québec) is exclusively referred to as Québec on official signage.

Montmorency Falls, the Basilica of Sainte-Anne-de-Beaupré, the Mont-Sainte-Anneski resort, and the Ice Hotel are all nearby tourist sites.

The Jardin zoologique du Québec, which is currently closed, reopened in 2002 following substantial restorations before closing in 2006. It included 750 animal specimens from 300 distinct species. The zoo focused on flying animals and floral themes, although it also housed many mammal species. While it highlighted Quebec’s indigenous wildlife, one of its primary draws was the Indo-Australian greenhouse, which featured fauna and plants from the Indian Ocean’s surrounding areas.

The Parc Aquarium du Québec, which reopened in 2002 on a location overlooking the Saint Lawrence River, has approximately 10,000 specimens of North American and Arctic animals, reptiles, fish, and other aquatic wildlife. Polar bears and numerous types of seals from the Arctic area, as well as the “Vast Ocean,” a large basin with a view from below, are among the aquarium’s key attractions.

Québec City is home to a variety of historic landmarks, art galleries, and museums, including the Citadelle of Quebec, the Musée national des beaux-arts du Québec, the Ursulines of Quebec, and the Musée de la civilisation.

Tourist stores abound in Quebec City’s Old Town, particularly in Basse-Ville. Look for leather products and other handcrafted items manufactured by Canada’s First Nations Peoples. Café culture is prevalent in Quebec City, as it is across much of Europe. It should be extremely simple to discover a charming café near Marche Champlain and the Chateau. In Quebec, food is quite expensive, and even a small café or pub may be pricey.

It is rather simple to get your bearings in Quebec. Many interesting attractions may be seen in the Old Town (Vieux-Québec), which is the walled city on top of the hill. Saint-Roch, Saint-Jean-Baptiste, Montcalm, Vieux-Port, and Limoilou are just a few of the nearby neighborhoods worth seeing, whether in Haute-Ville or Basse-Ville. Many stairs link Haute-Ville and Basse-Ville, including the appropriately called Escalier Casse-Cou (“Breakneck Stairs”) and the more readily climbable “Funiculaire.”

The city extends westward from the St. Lawrence River, mostly from the historic old city. Quebec City’s genuine downtown core is situated immediately west of the ancient city. Lévis is located across the river from Quebec City. The two sides of the river are connected by frequent ferry service.

Quebec City is situated in the Saint Lawrence River basin, on the north bank of the river at its confluence with the St. Charles River. The surrounding region is flat and low-lying. The river valley boasts excellent, arable land, making it the province’s most fruitful area. To the north of the city are the Laurentian Mountains.

A part of the city, as well as the majority of Old Quebec, is situated on a plateau known as the Promontory of Quebec. As a result of this physical feature, the city’s center and oldest areas are often separated into upper and lower town. Upper Town is located on the promontory of Cap-Diamant (Cape Diamond) at the eastern extremity of the hill. The Plains of Abraham are situated at the edge of a peninsula that has been fortified with massive stone walls during colonial times. Lower town, on the other hand, is situated near the eastern end of this plateau. It has been a working-class neighborhood for the most of its existence, in contrast to uptown, which swiftly became a destination for the local middle-class and bourgeoisie.

The majority of occupations in Quebec City are focused in government, defense, services, trade, transportation, and tourism. As the provincial capital, the city benefits from being a regional administrative and service center: appropriately, the provincial government is the city’s biggest employer, employing 27,900 people in 2007. With almost 10,000 workers in 2007, CHUQ (the local hospital network) is the city’s biggest institutional employer. In 2008, the unemployment rate in Quebec City was 4.5 percent, much lower than the provincial and national norms (7.3 percent and 6.6 percent , respectively).

The security and defense sectors are highly significant, and they have given rise to an industrial pole known as Technopôle Defence and Security.