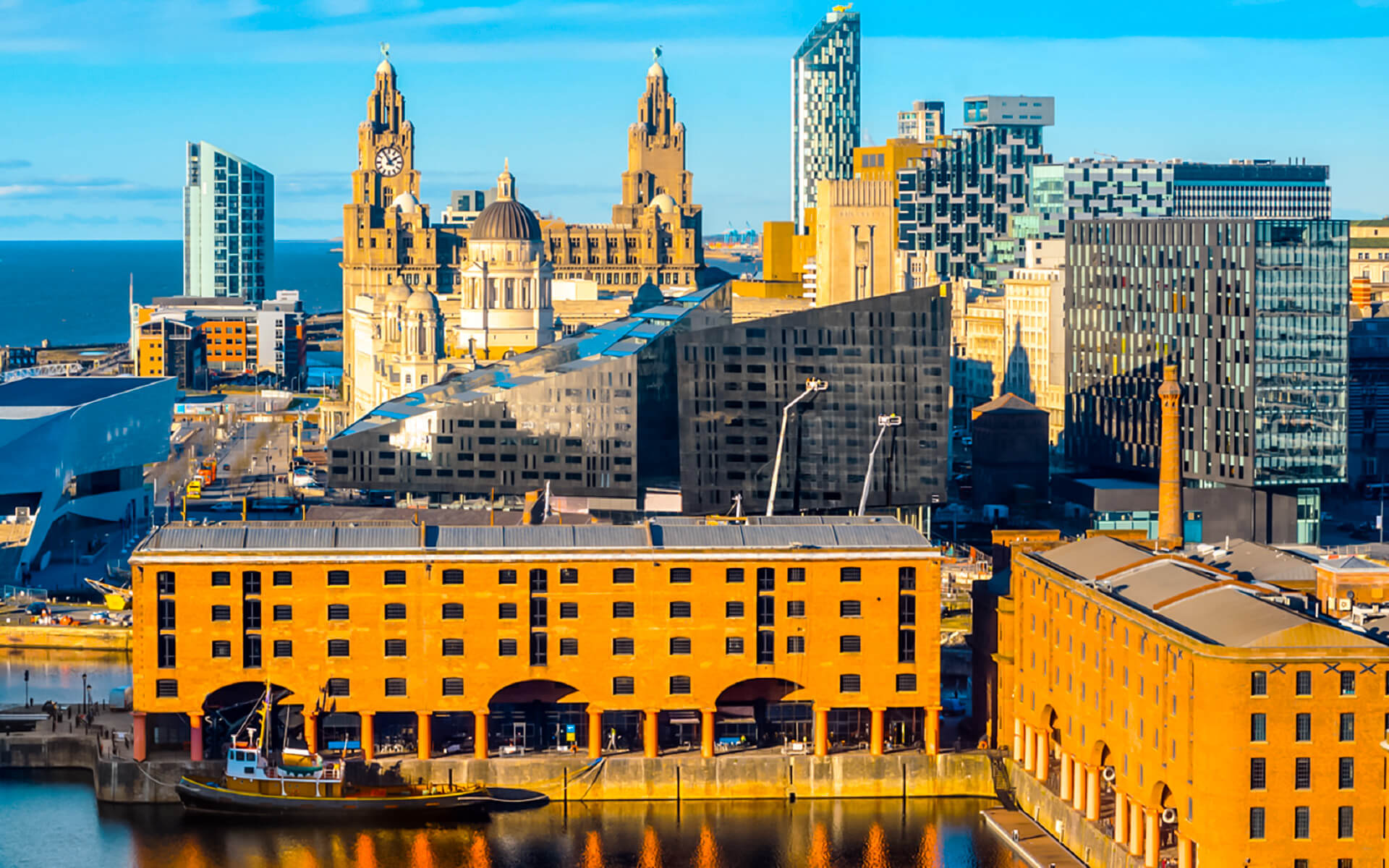 Liverpool is located on the eastern bank of the Mersey Estuary and was traditionally part of the old hundred of West Derby in Lancashire’s south west. From 1207 through 1880, it was a borough and then a city. The city’s rise as a major port and involvement in the Atlantic slave trade coincided with the city’s expansion during the Industrial Revolution. The RMS Titanic, as well as many other Cunard and White Star ocean liners such as the RMS Lusitania, Queen Mary, and Olympic, were registered at Liverpool.

In 2007, the city celebrated its 800th anniversary, and in 2008, it shared the title of European Capital of Culture with Stavanger, Norway. UNESCO designated many parts of Liverpool’s city center as World Heritage Sites in 2004. The Pier Head, Albert Dock, and William Brown Street are all part of the Liverpool Maritime Mercantile City. The city’s economy is mostly based on tourism. The success of The Beatles and other Merseybeatera and subsequent bands contributed to Liverpool’s appeal as a tourist attraction, earning it the title of “World Capital City of Pop” by Guinness World Records. Liverpool is also home to two Premier League football teams, Liverpool and Everton, and the Merseyside derby is a match between the two. Aintree Racecourse, on the outskirts of the city, hosts the world-famous Grand National horse race every year.

Liverpool’s port city position has contributed to the city’s diversified population, which has traditionally drawn from a broad variety of peoples, cultures, and faiths, notably from Ireland and Wales. The city is also home to the country’s oldest Black African community and Europe’s oldest Chinese community. Liverpool residents are known as Liverpudlians (or less popularly Liverpolitans) and “Scousers,” a reference to “scouse,” a kind of stew. The term “Scouse” has also come to represent the Liverpool dialect and accent.

Liverpool is a city in Merseyside, England, that is located inside the traditional county limits of Lancashire. It is known for its football teams, the Grand National horse race, music (including The Beatles), bustling nightlife, and linkages to the arts and culture.

The city was historically one of the most important ports between Europe and the Americas, growing to become England’s second most populous city by the census of 1861, but gradually falling after 1921 as transatlantic commerce declined. Many Europeans moving to the New World, mainly the Italians and Irish, traveled through the city before flying; the city still has a substantial Irish population, having spectacular churches for both the Anglican and Roman Catholic religions. The harbor also served as a conduit for the slave trade in the 18th and early 19th centuries, with vestiges of this time still visible throughout the city (Penny Lane is named after a slave ship owner, for example). A complete reconstruction of the city center has occurred in recent years, resulting in an infusion of new stores, boutiques, and huge performance/conference venues along the waterfront, resulting in an increase in population counts. Major political party conferences, the BBC Worldwide Showcase, the MTV Europe Awards, and the Global Entrepreneurship Congress are among the national and international conferences, media, and music events that the revitalized city now hosts on a regular basis.

As a result, Liverpool is mostly a nineteenth-century metropolis with lofty structures, which may be daunting at times. You wouldn’t describe it as “cozy,” and the Mersey waterfront (see picture above) isn’t exactly a spot where you’d want to settle down for a cup of coffee (except in the Albert Docks, but these do not face the Mersey).

Liverpool is a culturally rich city that was named European Capital of Culture in 2008, and its famed Pier Head Waterfront has been a UNESCO World Heritage Site since 2004. The Royal Liverpool Philharmonic Orchestra is based in Liverpool, which is also known for developing the skills of a diverse spectrum of artists and bands, including The Beatles, Gerry and the Pacemakers, Frankie Goes To Hollywood, Echo and the Bunnymen, Elvis Costello, and many more. Outside of London, the city boasts the greatest national museum collection and a complex and stormy past as a major global naval center. The oldest Chinatown in Europe is in Liverpool. In the outskirts of the city, the legendary Grand National Horse Race takes place (Aintree). Liverpool and Everton, two of the most successful Premier League football teams, are based in the city.

Liverpool, like most of the British Isles, has a moderate maritime climate with chilly summers and pleasant winters. Bidston Observatory (on the Wirral Peninsula) has historically supplied the Merseyside region with the longest and most uninterrupted weather data. The Met Office has lately maintained a weather station at Crosby.

Liverpool’s mild oceanic environment contrasts sharply with temperatures in mainland Europe, both at the same latitude and at latitudes considerably farther north, with relatively minimal seasonal variations. For example, places in continental Scandinavia farther north have hotter summers with longer heatwaves, but Liverpool, like the rest of the British Isles, lacks a typical snowy winter, despite its northerly position.

Liverpool is said to have “the most magnificent setting of any English city.” The city of Liverpool is built across a ridge of sandstone hills rising up to a height of around 230 feet (70 m) above sea level at Everton Hill, which represents the southern boundary of the West Lancashire Coastal Plain. It is located 176 miles (283 km) northwest of London, on the Liverpool Bay of the Irish Sea.

Liverpool and the Wirral Peninsula are separated by the Mersey Estuary. Liverpool is bordered on the north by Bootle, Crosby, and Maghull in south Sefton, and on the east by Kirkby, Huyton, Prescot, and Halewood in Knowsley.

Liverpool’s economy, like that of most of the rest of the UK, is dominated by service sectors, both public and commercial. Public administration, education, health, banking, finance, and insurance accounted for more over 60% of all jobs in the city in 2007. With the construction of the Liverpool Knowledge Quarter in recent years, the city’s knowledge economy has seen substantial expansion in industries such as media and life sciences. Liverpool’s rich architectural heritage has also contributed to the city’s status as the UK’s second most filmed city outside of London, with roles as Chicago, London, Moscow, New York, Paris, and Rome.

The tourism and leisure industries are also significant contributors to Liverpool’s economy. Liverpool is the sixth most visited city in the United Kingdom and one of the top 100 tourist destinations in the world. Overnight tourists poured £188 million into the local economy in 2008 during the city’s European Capital of Culture festivities, while tourism as a whole brings in over £1.3 billion per year to Liverpool. Liverpool is one of the few cities in the world where cruise ships may port directly in the heart of the city, thanks to the city’s new cruise liner terminal, which is located at the Pier Head. Other recent projects in Liverpool, such as the Echo Arena and Liverpool One, have positioned the city as a major leisure destination, with the latter helping to propel Liverpool into the UK’s top five retail destinations.

Liverpool’s economy has traditionally been centered on the city’s port and industrial base, albeit the port now employs a lower percentage of the city’s overall workforce. Despite this, the city remains one of the most significant ports in the UK, with over 32.2 million tonnes of freight handled in 2008. Liverpool2, a multimillion-pound addition to the Port of Liverpool, is set to open at the end of 2015 and is expected to significantly enhance the amount of cargo that Liverpool can handle. [142] Many shipping companies, like Japanese business NYK and Danish firm Maersk Line, have their UK headquarters in Liverpool, while shipping giant Atlantic Container Line has lately invested significantly in expanding its Liverpool operations, with a new headquarters presently under construction. Liverpool Waters, a proposal to revamp the city’s northern port system, may see £5.5 billion spent in the city over the next 50 years, producing 17,000 new employment.

The Jaguar Land Rover Halewood facility, where the Range Rover Evoque model is produced, is also located in the city.

If you want to use your phone in Liverpool, you should check into various local sims.

EE, Vodafone, Three, and O2 are the primary mobile networks. However, a slew of MVNOs make use of these networks’ infrastructure, and they often provide plans suited to expat communities and tourists who want to make international calls. The majority of these SIM cards may be purchased in local stores; however, Giffgaff does not have stores and exclusively ships SIMs to the United Kingdom. If keeping connected is important to you, you should compare network data speeds using OpenSignal’s London coverage maps.